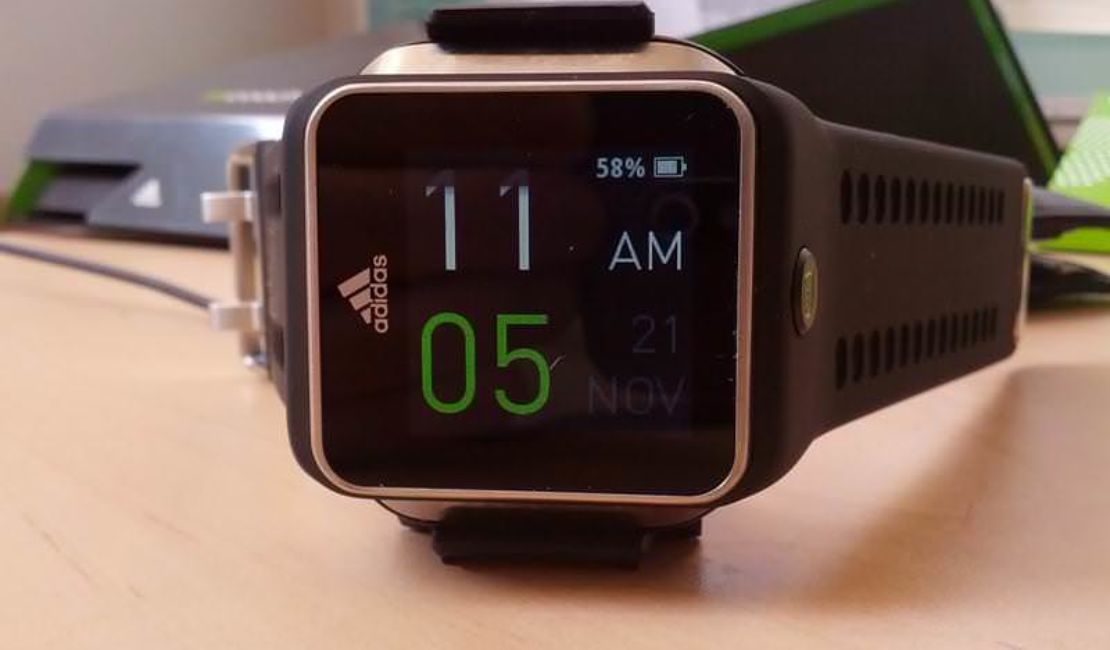 My approach to running gadgets is decidedly contrarian to my outlook on gadgets in general: when I run, I want to focus on the physical act rather than get bogged down in music, data, blinking lights, or beeps from battery-operated distractions.

I was a latecomer to GPS watches in general–the one I opted for was fairly straightforward as well, making the transition as easy as possible.

For a music-less, minimalist runner, taking this leap was large enough in its own right that even the leanest watch would imply a tectonic shift in the way I trained. Dropping the Adidas miCoach Smart Run watch in my lap was an interesting way to test not only the GPS watch, but also my own inhibitions toward run-centric gadgetry.

Content with the watch I had used for two repeat cycles of marathon training, I assumed I would be content with a simple device which monitored spits, distance, calories, and time elapsed. When the miCoach Smart Run came in for review, I was a bit skeptical of its shiny newness: a touchscreen, Android-based smart watch seemed antithetical to what I came to love reluctantly.

Years of running left me only half-accepting a straightforward watch that designed to be decidedly content being suitable only for logging basic activities. The miCoach strives to be more than just a running watch–it has the aesthetics and operability to warrant everyday use, while also boasting impressive features I would not expect from a running watch of any variety.

The miCoach Smart Run is the flagship device within Adidas’ line of fitness-focused accessories. An unapologetically-bulky device, the miCoach has a sleek square face with a reinforced, sturdy watch band. This is a compelling feature for me, as I’ve been known to break wristbands on other watches in the past.

Snapping an eyelet on the miCoach looks downright impossible–the band has twin-slotted grooves which grip tightly to metal clasps, in addition to the secure fastener which keeps everything in place securely. Past that, the watch face boasts only one button. This design feature is a blessing and a curse for anyone accustomed to having myriad buttons on a GPS watch, as determining which features require a double-tap versus a single-tap creates a fairly long learning curve.

The nuts and bolts of the miCoach are incredibly impressive. Built on a custom version of Android, the watch is jam-packed with features ranging from simple stopwatch functionality to fully-fledged workout routines. As other reviews (http://www.engadget.com/2013/11/19/adidas-micoach-smart-run-review/) have pointed out, it would be great to see custom apps designed for the miCoach’s API, but the device is still more than sufficient in their absence.

Non-Android users won’t find an OS-specific learning curve here, either: from the outside, the watch is self-contained and fairly intuitive. The miCoach also features a built-in optical heart rate monitor, which is perfect for runners like me who have next to no interest in wearing additional gadgetry around their waist. Bluetooth capability allows for wireless Mp3 playback as well, making use of the watch’s impressive three gigabytes of storage given its size.

From a technical standpoint, the miCoach website/watch interactivity shines in its capability (if failing somewhat in their execution). The device syncs over WiFi exclusively, removing the obstacle of installing software, device-specific browser plugins, or trying to find an elusive watch cradle just to import runs. Changes to the watch’s display screens are also done online, which can be a mixed blessing.

Personal experience made this element of the experience frustrating, as I yearned to set up screens in real-time on my own device in lieu of making changes and hoping they’ve synced to my watch properly. Otherwise, syncing the miCoach Smart Run is a breeze–providing the easiest syncing experience I’ve had to-date with a GPS training watch.

I’ll be straightforward–this watch is gorgeous. It has a decidedly-masculine aesthetic, so caveat emptor if this isn’t for you. Out of the box, the watch is ready for action and prepared to show off its best features. The brightly-designed, inviting interface begs for exploration: drop-down menus and scrolling features unravel the watch’s true capabilities.

Without any customization, the miCoach displays heart rate information first and foremost–changing colors depending on heart rate throughout the duration of a workout. Coming from a world of simpler GPS watches, this feature was as interesting as it was distracting. I found myself wanting to look at my wrist on my first run instead of looking at the road. A few passers-by were as intrigued by the chameleon on my wrist as well, which came as little surprise to me.

Delving a little deeper into the guts of the miCoach Smart Run allowed me to see just how wide-ranging the device’s capabilities truly are. Within no time, I was setting up customized workout plans (both per-day and weekly), creating running routes, tracking anticipated race finish times based off of workout results, and tracking my progress on the miCoach website.

Among my favorite features was the ability to track shoe mileage–an important asset when cycling between shoes or tracking wear and tear during training season. Aside from running, the miCoach system allows for multi-sport use, as well as logging in weight training workouts and achievements. The miCoach website provides a wealth of training data, stunning visualizations, and further training modules to complement the watch’s features.

The miCoach community also serves as an excellent troubleshooting network in addition to providing training tips and ideas for making the most of the device.

Let me get this out of the way first: the battery life leaves much to be desired. Granted, I’m used to a watch which only requires sporadic charging, but I have reservations about this watch making it through a race which is marathon-length or longer. I haven’t measured how many runs it takes before the battery expires completely while engaging in an activity, but a 24-minute run took the battery from 100% charged to 88% with ease. At this point, I’d love to recommend the watch for long training runs and marathon-length races, but I’m not sure the watch would go the distance.

Outside of battery life concerns, I found GPS tracking to be erratic at times. Take, for example, the below—a screengrab from a recent run through New York City’s Chinatown. The tracking signal gets out of whack by an unusual amount, something which is not abnormal for the device:

On rare occasion, the miCoach Smart Run has missed the mark completely—even freezing mid-run during one activity.

The lack of GPS specificity could be due to my urban environment. In the past, I have noticed that all running watches require considerable lead time before obtaining a satellite signal. This, however, would not explain the wild changes in GPS location—which also yield sometimes-inaccurate pace measurements.

Thankfully, these elements of the miCoach Smart Run can be solved through software fixes. The nuts and bolts of the watch remain solid, so there is hope that these elements can be smoothed out in the past. One may not want to wait until future updates make the watch more reliable, and battery-friendly, however, given the watch’s price tag.

The Adidas miCoach Smart Run is a formidable entry into the crowded GPS watch market. The watch portends the future of running watches—one where a comprehensive workout partner, Bluetooth-enabled music player, and GPS unit are teamed up into a solitary unit that’s sleek enough to wear with a suit, let alone moisture-wicking gear.

This vision of the future, however, is not without its limitations: battery life lasts a day at best if not turned on for exercise only, GPS tracking can take a while to load and is occasionally erratic when displaying routes, and the operating system—though promising—is not bug-proof.

The watch is a marvel, but it does have its pitfalls, leading to a cautious buying recommendation. Luddite runners looking for barebones GPS tracking should look elsewhere, but others looking for a bleeding-edge gadget could do worse than the miCoach Smart Run.

We thank the nice people at Adidas for sending us a pair of miCoach Smart Run to test. This did not influence the outcome of the review, written after running more than 50 miles in them.

The GPS Watch Grows Up: Running with the Adidas miCoach Smart Run