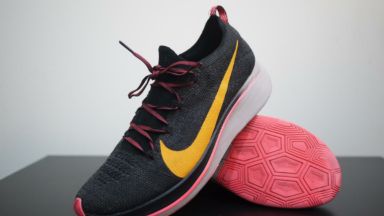 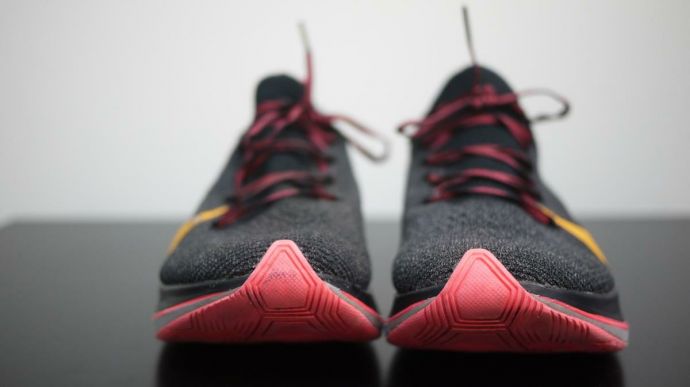 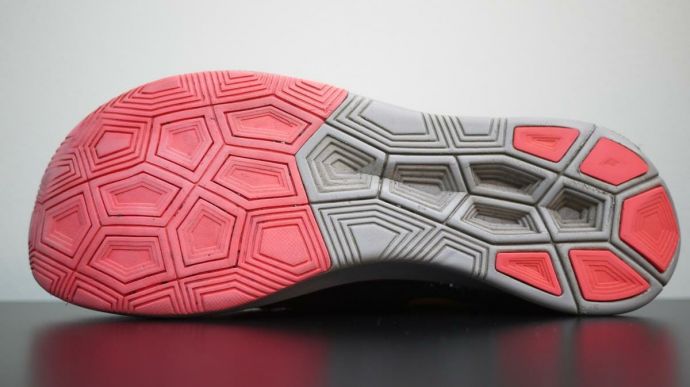 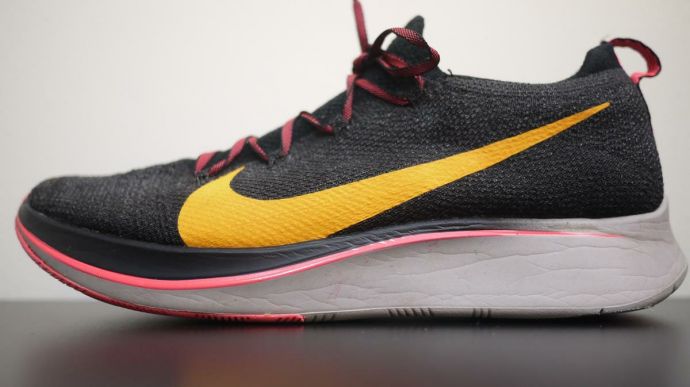 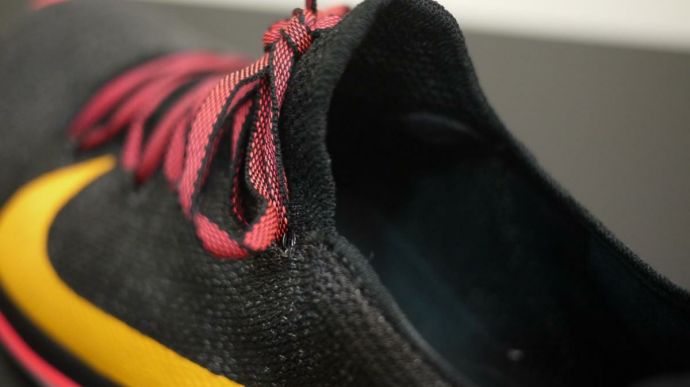 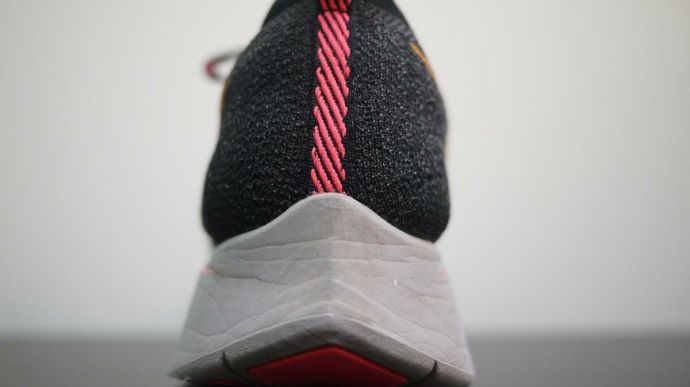 Nike’s Breaking2 project that flirted with a sub 2:00:00 marathon is fading slightly into the past, and the tech that did it is slowly trickling more into consumer products.

The Zoom Fly Flyknit is the “affordable” sports car of the running shoe world, where you can get some of the most groundbreaking tech like a carbon fiber midsole in a shoe made for the masses.

The price is high, but Nike is turning into the only major player in this elite marathoner shoe category and they can command such a price because their shoes are that good.
WHERE TO BUY
LOWEST PRICE
$160
SHOE INFO
Nike
Brand
Zoom Fly Flyknit
Model
Lightweight
Type
8.60 oz. (244 gr.)
Weight
160 US$
MSRP
10 mm
Heel Drop
Sep / 2018
Release Date
Zoom Fly
Previous model
WHO IS IT FOR
If you’ve won races, regularly finish at the top of the group, and seriously need to shave off as much as you can for long distance races, you should be eyeing this shoe.

It’s overkill for the daily jogger, but can unlock a few seconds per mile on the feet of nearly any runner.
Help me choose

The Zoom Vaporfly 4% made news headlines when it was used to almost break 2 hours in the marathon, and again when the New York Times wrote a piece investigating if that shoe gives you an edge.

It does give an edge, but that shoe is $250 and was in limited production.

The Zoom Fly Flyknit featured in this review takes most of that tech and simplifies it down to a price point that some top level runners could rationalize as affordable.

I never got the chance to run in the Zoom Vaporfly 4% shoes, but I did get the Zoom Fly shoes and was thoroughly impressed. So I jumped at the opportunity to review the Zoom Fly Flyknits.

Ever watch a really old nascar race and realize the car you were just in has way more horsepower and safety features, yet you use it to commute around?

The running shoe world operates in a similar way, where only the elites get the latest and greatest, and the remainder of the population waits decades for the tech to turn into commonplace consumables.

Back in the 50’s Bill Bowerman (Nike’s original innovator) was hand crafting track spikes for his athletes. Now, track spikes can be purchased for $20 and could probably out perform the ones Bill made.

And also now, Nike has wind tunnel tested, carbon fiber reinforced, fancy shoes that are making their way into the early adopter market.

This Zoom Fly Flyknit with Carbon Fiber and heavily tested midsole design is the leading wave of faster shoes to the average consumer from Nike.

Clearly, you can take this shoe and drop your 5:00 marathon to a 4:00, and climb 4 steps at a time instead of 2. And clearly, I was being sarcastic there, as there’s a limit as to how much gear can improve the athlete.

The best of the best from Nike is claimed to improve your time by 4%, so given this is slightly worse than what they have.

A solid week of training for most folks can improve racing times by more than 4%, be careful thinking you can spend money for speed gains instead of working harder.

However, you’ll still feel slightly faster in these shoes than in most others. I put them on and was happy to see Nike using a tougher material for the upper, and that they moved away from Flywire to integrating the laces into the upper.

These would help increase the longevity of the shoe. The color was also pretty striking, with a Pink outsole and orange highlights. Looked a bit like a reentry vehicle.

But, the biggest feature I noticed about these shoes when I first put them on was the carbon fiber plate. A few strides in the shoe and you can clearly feel a platform springing back some energy to you inside the midsole.

I tried to grab both ends of the shoe and bend it in half, but that carbon fiber plate resisted HEAVILY.

Normally, an inflexible shoe like that is as good as garbage, but the shape of the midsole lets you follow through with your stride and the stiff carbon fiber smoothly.

This was something that felt good to run on. I did a 10 mile run around Boston and decided these shoes were good enough for the 5k race I had the next day.

After doing well in the race, I got into chipping away at testing these shoes for 50 miles, and then accidentally ran too much in them and I’m sitting north of 100 miles right now in these shoes.

Carbon fiber. Hype? Somewhat. Real? Yes. Unlike MANY of the terms that Nike uses to describe their shoes, carbon fiber is a real, quantifiable, advanced piece of technology used outside the running community.

How it works to make you more efficient with your running is by deflecting under your load as you land, and then returning back to the original shape.

Since carbon fiber is so stiff and lightweight, you can get pretty great energy return with hardly any added weight.

The same amount of resistance with something like fiberglass would require a lot more material, and a lot more added weight.

The overall feeling does mimic what it’s like to run on a springboard, as any force on the shoe is spread out across the plate and returned back from the same plate.

This is a feeling I haven’t felt before in shoes, and so it took me 30+ minutes of running in the shoes for it to blend into the shoe.

Surrounding this carbon fiber plate is Nike’s React Foam. That foam has 13% more energy return than their Lunarlon foam, which is a statement since that’s already one of their proprietary foams that does well across the board.

Their React form is light, energy efficient, and durable. Perfect for long distance running (and frankly most running in general). I can confirm that this foam is great at cushioning without sucking away energy.

The layout of this foam is a fair amount in the forefoot to provide a stable landing, and then a very tall and frankly narrow section of foam below the heel that converges to a point directly behind the achilles.

If you’re a heel striker, these shoes will feel sloppy, since the heel is designed to be less of a crash pad, and more of a final step in toeing off.

The final parts of the sole is the surprisingly simple outsole design (when compared to all the new tech in the rest of the shoe).

The outsole is basically the same as the Zoom Fly, Zoom VaporFly Elites, and similar to even some of the Pegasus shoes.

It’s a fully rubberized forefoot, and then set of 5 patches of rubber around the heel with an empty expanse of foam along the middle of the outsole.

This is just enough traction and durability for occasional training, perfect for racing, and maybe not enough for lots of daily running. However, this is what Nike is pointing the shoes towards.

The insole says “RACING”, and runners have unofficially found that the carbon fiber plate begins to wear out after 100 miles, so a thin rubber outsole makes sense when you consider this shoe as a racing shoe.

What got me worried with the Zoom Fly shoes was the thin fabric upper, since it looked like it would be the first part to fail. I was correct, and after 300 miles, those shoes started to develop holes around the edges of my toes.

Now the Nike Zoom Fly Flyknit shoes here have a fairly tough and malleable material used for the upper. I’m tempted to go as far and call it rugged.

I suspect since this Flyknit fabric is tougher than the predecessor, Nike felt confident enough to loop the laces directly through the upper rather than adding Flyknit strings to hold the shoe together.

So far, that’s felt like the correct decision as the exclusion of flywire makes the shoe feel more evenly snug than if it had flywire.

The upper of this shoe also features no tongue. Or maybe it’s all a tongue. Simply put, Nike sewed what would have been the tongue right to the edges of the shoe so seamlessly that it looks almost like a sock.

I thought this would be a problem since I like to tie my shoes tightly and trying to shrink a hole like that usually results in crumpling fabric, but that was not the case in the Zoom Fly Flyknits.

The upper is flexible enough that it hugs your feet even with the laces fully open, so that when you do tie up the shoe with laces, everything is locked in place.

Sine the upper is pretty much just a single section of fabric without any plastic overlays or reinforcing foam, the heel ends up being very floppy when you try to put the shoe on.

Nike added a thin pull tab to make up for this, and it’s just enough to help you get the shoes on. Overall, the heel of the shoe fits comfortably around your foot, and I noticed no risk of blistering in the way it was designed.

Nike frequently finds itself into my favorite set of running shoes, and the Zoom Fly Flyknit is no exception.

I challenged myself to find flaws with this shoe since I liked the Zoom Fly shoes so much and didn’t want to write a biased review. Yet I still ended up really liking these shoes and have not much to complain about.

Yes, if you’re a heel striker you won’t like this shoe that much, yes, the price is high for what’s supposed to just be a racing shoe.

Yes the upper is kind of loose when you first put it on, but…the shoe’s React foam, strong upper, and, the carbon fibre plate turn this long distance racer into a top-tier choice for long distance athletes.

I’m almost certain that if you’re a top athlete in your field who hasn’t tried the Zoom line yet, you’ll be thoroughly impressed with this shoe.

We purchased a pair of Nike Zoom Fly Flyknit from runningwarehouse using our own money. This did not influence the outcome of this review, written after running more than 50 miles in them.