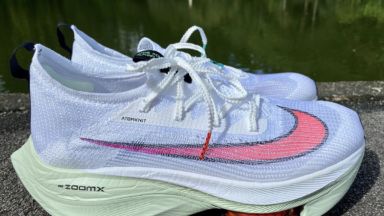 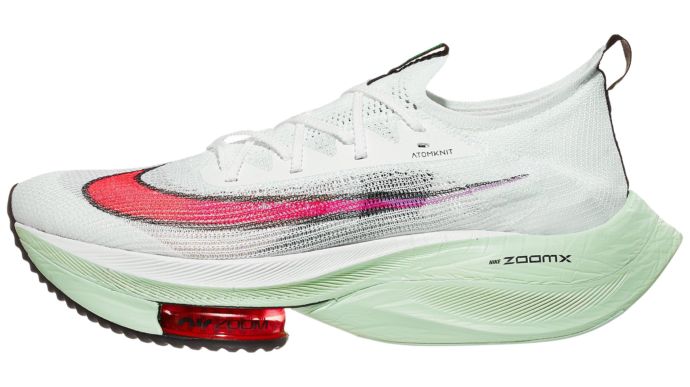 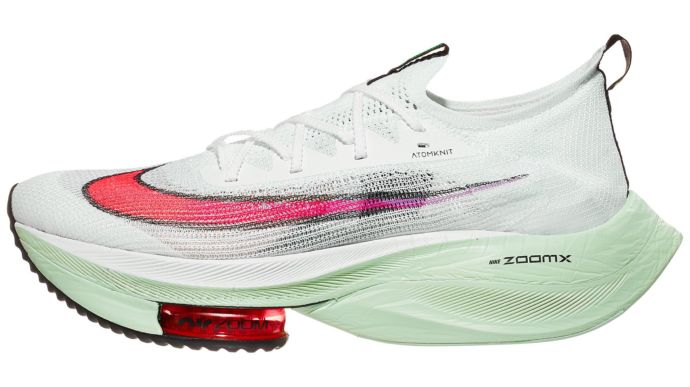 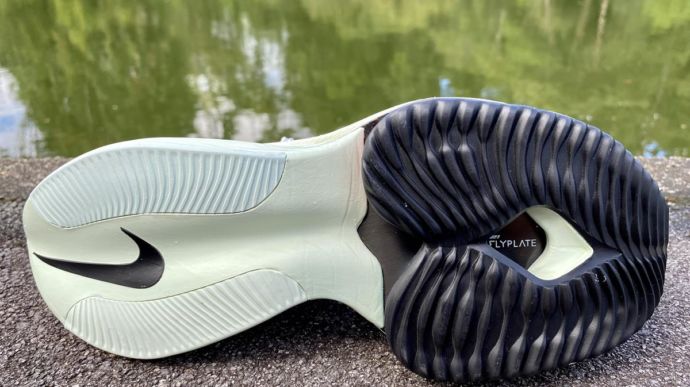 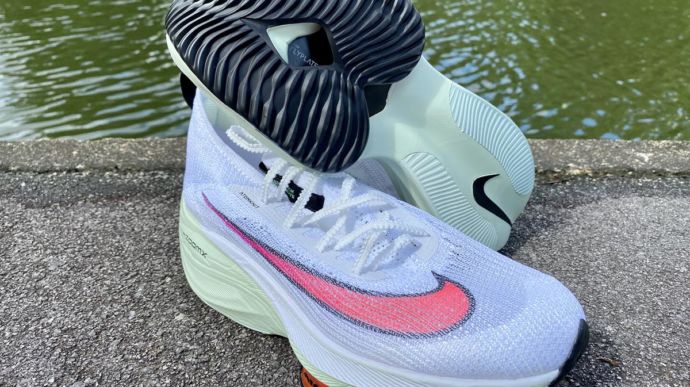 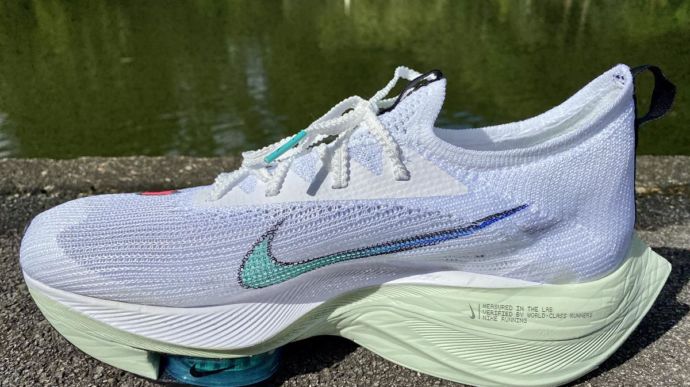 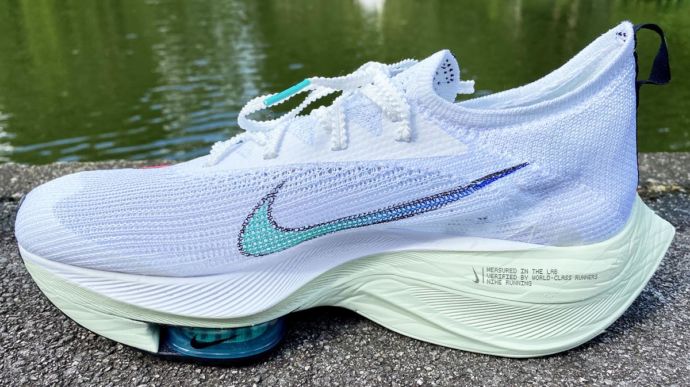 The Alphafly Next% is the flagship Nike marathon racing shoe and is deserving of its premium price.

Light, breathable Atomknit makes its debut while the combination of ZoomX and a stiff carbon plate results in a propulsive ride second to none.

And if that wasn't enough, two giant Zoom Air pods in the forefoot give the Alphafly extra “pop”.
WHERE TO BUY
LOWEST PRICE
$274
SHOE INFO
Nike
Brand
Air Zoom Alphafly Next%
Model
Racing
Type
7.4 oz. (210 gr.)
Weight
275 US$
MSRP
4 mm
Heel Drop
WHO IS IT FOR
If you're a runner looking for a highly cushioned race day option which is super responsive and very stable, the Alphafly Next% is a great choice.
Help me choose

This is the perfect name for the flagship Nike racing shoe which will be the first weapon of choice for most of the Nike elite marathon athletes.

The Alphafly Next% is the production model of the prototype that Kipchoge used to run the first ever sub 2 marathon distance in October 2019. Runners were already drooling to get their hands on a pair back then.

Since Nike launched the Vaporfly 4% and the Vaporfly Next%, other brands have had to play catch up and have struggled to produce a marathon shoe that could compete with the Vaporfly in cushioning and propulsion.

Now, Nike is looking to get even further ahead of its competitors with the Alphafly.

You’d think that a $275 racing shoe would be difficult to sell in a year where most of the marathons have been cancelled but no, the Alphafly sells out in seconds.

In order to purchase my pair I had to submit my fastest time for a 1km, 5km or 10km through the Nike Run Club app. That didn’t even guarantee me a pair.

I still had to purchase it on a first come first serve basis as soon as I received the app notification.

This way, Nike made sure that actual runners bought the Alphafly and not sneakerheads looking to make a quick profit in the secondary market.

So what’s so good about the Alphafly that makes it almost impossible to buy even though it’s the most expensive running shoe on the planet?

When holding the shoe in my hand for the first time I couldn’t believe how light it felt for such a big shoe. ZoomX foam really is a marvelous piece of technology.

Pulling the Alphafly on while wearing thick socks took quite a bit of force due to the small opening and the snug racing fit.

My first run was 15 kilometres at mostly marathon pace (5.39 per kilometre). I also added in some 10km pace and slower paced segments.

The first thing that I noticed was how stable the shoe was due to the wide forefoot that flares out. The Vaporfly Next% has a really narrow, tall design and favours forefoot/midfoot strikers whereas the Alphafly is suited to heel strikers as well.

The second thing I noticed was how incredibly cushioned they were.

They felt softer than every other carbon-plated shoe I’ve run in (except the FuelCell TC) and even softer than the Vaporfly Next% which is already a very cushioned shoe.

I knew immediately that I would be able to run a full marathon in them.

Back when I first saw Kipchoge run in the Alphafly in Vienna, I thought to myself, “Those look so clunky. They must be unstable and difficult to run in.”

I couldn’t have been more wrong. What I didn’t get to see close up is that the forefoot of the Alphafly actually flares out, creating a large, stable base.

The midfoot is also wider than that of the Vaporfly 4% and Next%. This design makes the Alphafly extremely stable, even for heel strikers. I didn’t even have to slow down when coming to a turn.

For me, the best feature of the Alphafly is the hole in the bottom of the shoe which allows you to see the carbon plate.

Functionally, this hole does a couple of things to improve the shoe: it makes landings feel softer because it allows the foam to compress through the hole and it also sheds some weight- with racing shoes, every gram counts.

The carbon plate (named Flyplate) in the Alphafly functions the same way as in the Vaporfly but differently to other carbon racers.

It’s one of the stiffest carbon plates in a running shoe and this stiff plate gives it its propulsive nature.

It acts as a lever or spring. The front of the plate is anchored so when you load the rearfoot, the squishy ZoomX compresses downwards and when released, springs you forward.

The carbon plate in the Alphafly differs depending on what size shoe you purchase. In smaller sizes, the plate is more flexible but in bigger sizes, it is stiffer.

In my size, 8.5, the plate had a small amount of flex to it. The same size in the Vaporfly Next% had zero flex.

The stars of the show are the gigantic Zoom Air pods and the biggest differentiator in the sole between the Alphafly Next% and the Vaporfly Next%.

I didn’t feel the air bags compressing while walking or running slowly but as soon as I picked up the pace and applied more force, the Zoom Air came to life and added a springy sensation to toe offs.

The faster you run and the harder you strike, the more the Zoom Air compresses and the higher the level of rebound.

The forefoot outsole is covered entirely in thick rubber while the rearfoot has two, long vertical strips of rubber that are recessed into the midsole.

There is an area on the midfoot which is not covered with rubber but that area never touches the ground because it sits behind the floating air pods.

I’ve spoken a lot about the technical aspects of the shoe. So how does it perform?

The Alphafly far exceeded my expectations. I already knew that it was a speed demon with the explosive responsiveness to shatter world records.

What surprised me was how good the Alphafly felt on easy and relaxed runs. They felt cushioned and bouncy with zero mushiness but still very efficient because of the carbon plate and the Zoom Air units.

The midsole foam, carbon plate and the Zoom Air pods all work together in an incredibly cohesive manner.

I would without any hesitation use the Alphafly as a daily trainer if the price wasn’t an issue. That’s how great the Alphafly felt on my easy runs.

A negative thing about the Alphafly is that ground feel is non-existent. The thick midsole, plate and air bags put a lot of distance between you and the road.

The Alphafly is also a noisy shoe. Not only does the thick outsole rubber slap the ground, but I also heard a clicking sound which came from the left shoe when running.

I couldn’t pinpoint where the clicking was coming from but it’s most likely the hard plate against the Zoom Air units.

I wouldn’t describe ride transitions in the Alphafly as smooth. Its midfoot floats above the ground so you transition straight from the heel to the forefoot.

Transitions feel very “mechanical” or machine-like with the concoction of components in the sole.

Traction was good on dry and wet roads, and on dry pavement but it was a little slippery on wet pavement.

When it comes to durability, the ZoomX foam of the Alphafly will start to show creasing immediately but it doesn’t alter the ride. ZoomX is great at keeping its softness and bounciness for hundreds of kilometres.

I’ve seen some slight wear on the forefoot rubber and on the lateral heel posterior but the Alphafly feels like a really well-built shoe.

I will be reserving mine for race days and special occasions though because of the high cost per kilometre.

You know how over time your thick, white, fluffy socks get thinner so when you stretch them you can see right through them?

That’s what the Atomknit upper of the Alphafly reminds me of because of the open, net-like structure of it.

Atomknit is a new generation of Flyknit which is much more breathable, lighter and better at repelling liquid so that the shoe stays light during races.

Nike says that Atomknit has been steamed and stretched. To the touch, it feels harder and rougher than previous versions of Flyknit. There is very little stretch to it.

The bootie construction has minimal padding except for a small foam pod on the inside of the heel collar to prevent your heel from slipping.

I found the upper of the Alphafly to be really comfortable and accommodating for a racing shoe. The heel and midfoot are snug but not tight and the toe box is deep and wide.

There are last row double eyelets but you can’t do heel lock lacing because of the bootie construction. I found lockdown to be fantastic and I didn’t ever feel the need for heel lock lacing.

I prefer to wear medium-length, thick socks in the Alphafly because its collar comes up high, so low socks might cause chafing around the lower ankle.

Thicker socks made the shoe more comfortable for me because the Atomknit is so thin and void of any cushioning.

Overall, the Alphafly fits true to size with ample toe box room and a snug (but not tight) midfoot and heel.

It’s going to be really difficult to save these for race day because I feel the urge to do all my runs in them.

Whether it’s easy runs, threshold or tempo runs, the Alphafly feels good on all of them.

What sets the Alphafly apart from other carbon racers is that it’s a lot more cushioned and stable so it blurs the lines between trainer and racer.

The Alphafly is a true all-rounder. You’re able to use it for a 5k or 10k race, or for a half or full marathon. I’ll be using it for marathons, when I want lots of protection and I don’t mind not having any ground feel.

The Vaporfly with its tall and narrow design makes it more suited to elite runners with perfect form whereas the Alphafly is suited to a broader range of runners.

With the Alphafly, Nike has managed to get even further ahead of the pack. The other brands have a lot of catching up to do.

In my honest opinion, the Alphafly Next% is worth every bit of its enormous price tag and worth all the effort to buy it.

We purchased a pair of Nike Air Zoom Alphafly Next% using our own money. This did not influence the outcome of this review, written after running more than 50 miles in them.

Visit ShopNike
This page contains affiliate links. As an Amazon Associate I earn from qualifying purchases.
WHERE TO BUY
LOWEST PRICE
$274