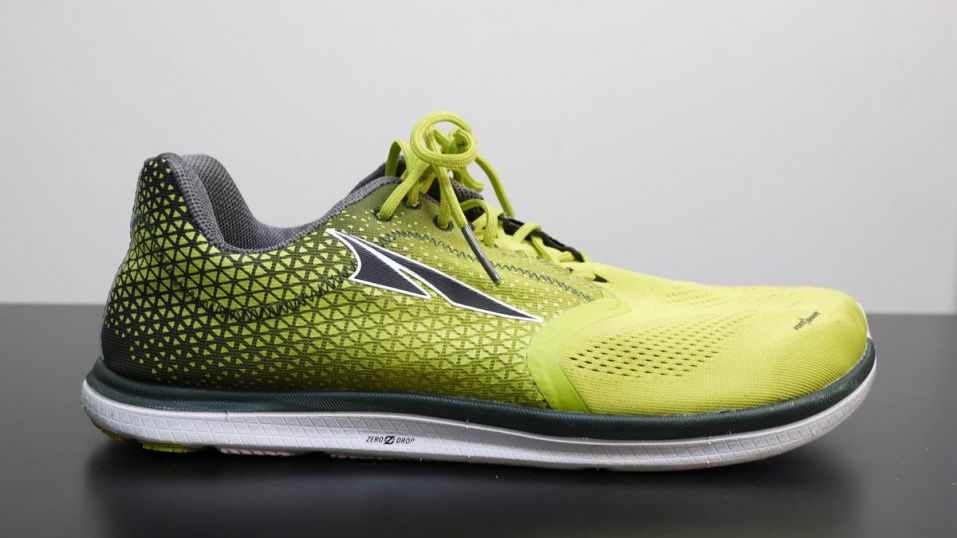 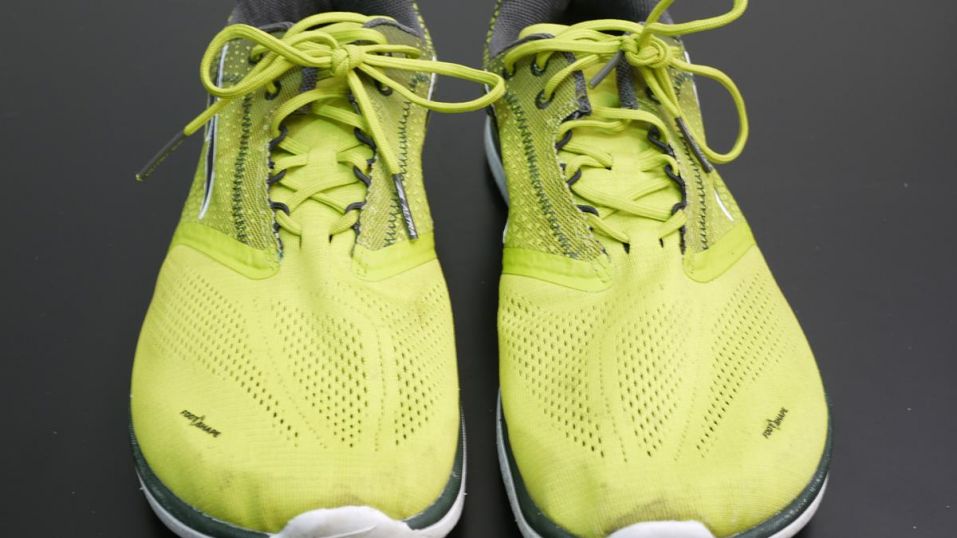 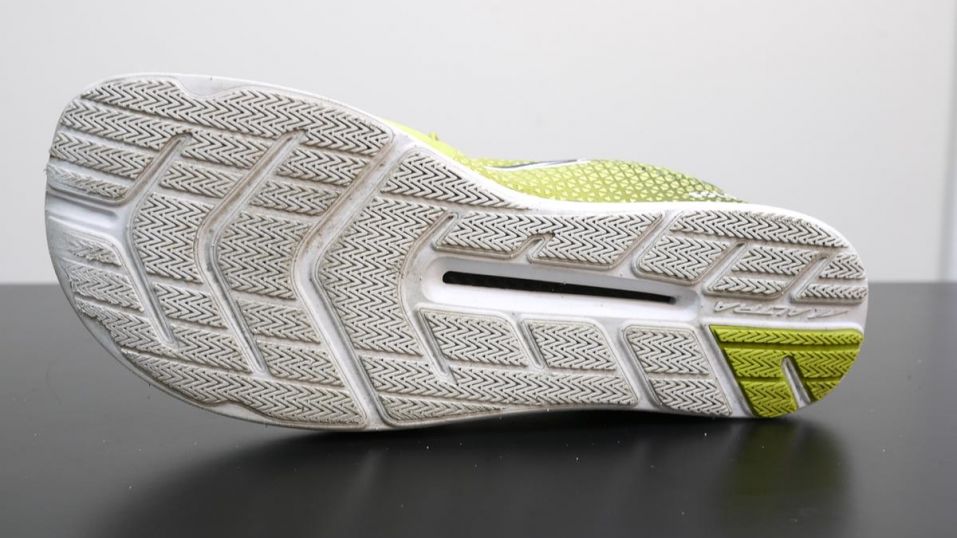 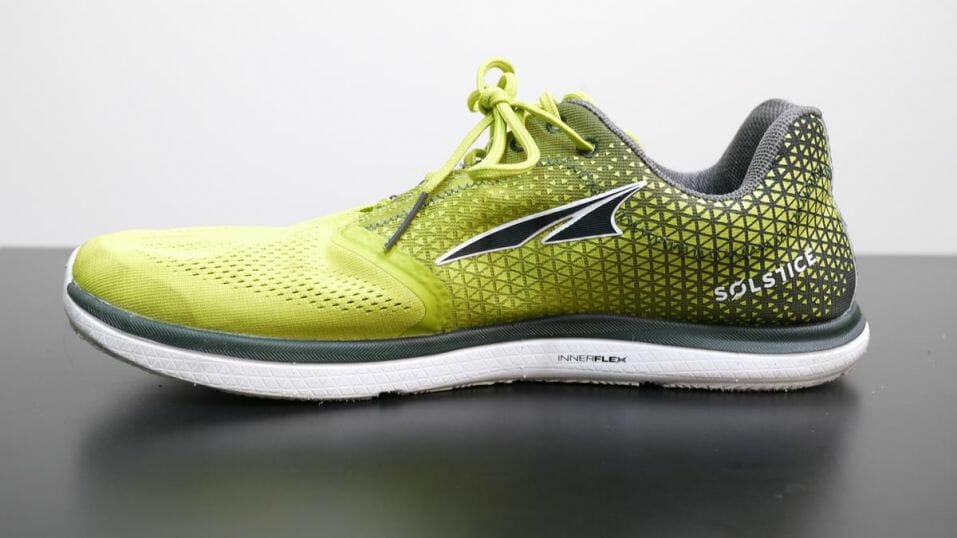 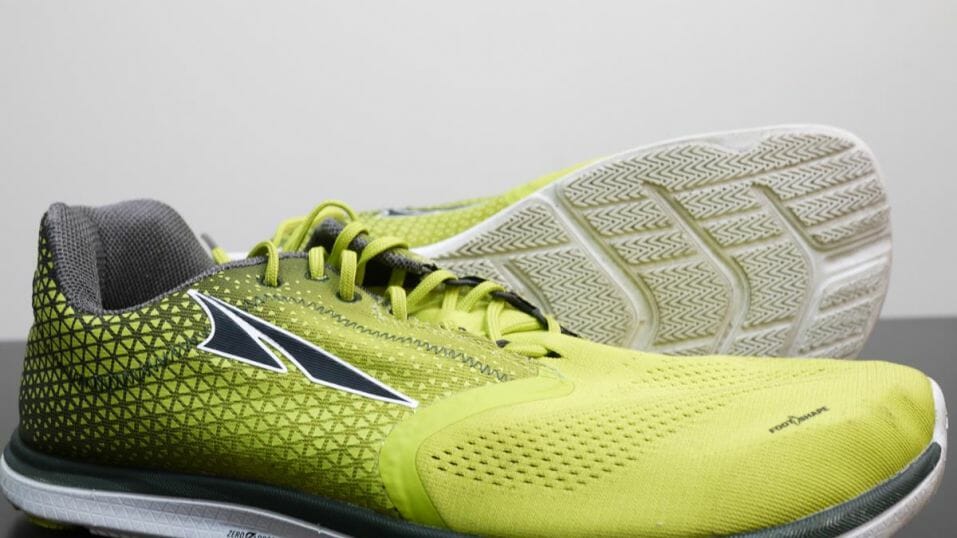 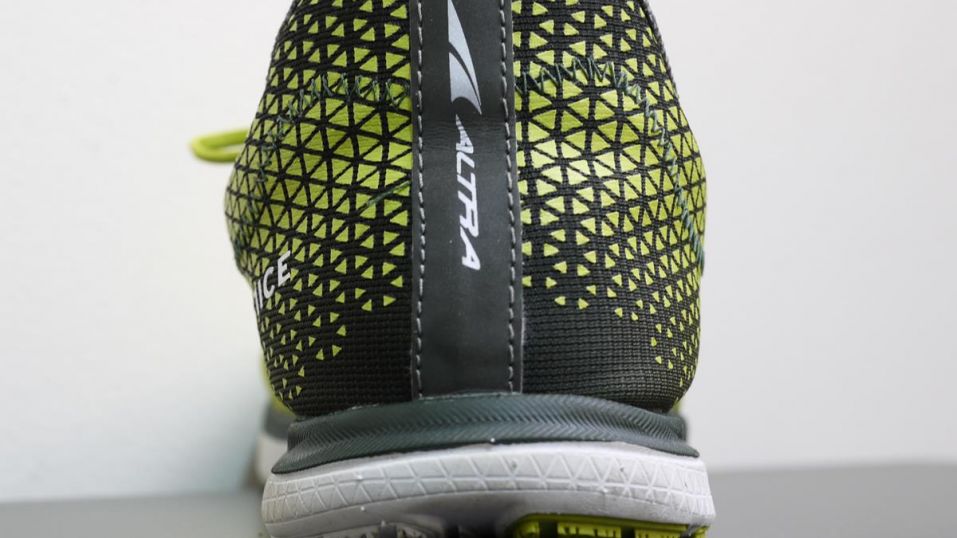 The Altra Solstice running shoe is almost a one of a kind shoe, offering a zero drop racing designed shoe with a very wide open toe box for a natural gait.

Although some of the material choices sacrifice durability, you’ll possibly make up those differences with the weight savings.
WHERE TO BUY
LOWEST PRICE
$46
SHOE INFO
Altra
Brand
Solstice
Model
Lightweight
Type
7.5 oz. (213 gr.)
Weight
89.95 US$
MSRP
0 mm
Heel Drop
WHO IS IT FOR
This shoe is for runners who need a race-styled shoe and who need a zero-drop platform that offers an unrestrictive fit for their toes. Experienced runners will probably get the most value out of this shoe.
Help me choose

The Altra Solstice running shoe (like all Altra shoes) has a zero drop midsole paired with a very roomy toe box.

It’s simple to find other shoes that have a zero drop midsole, but trickier to find shoes that also have a roomy toe box. Combine that with a shoe that weighs about 9 ounces and you’ll have a limited selection.

The New Balance Minimus shoes used to be a good alternative for those who wanted a minimalist shoe with zero drop, but the zero drop versions are getting harder to find.

The Merrell Trail Glove is a close competitor, with a zero drop, 11.5 mm outsole, coming in at 8 ounces under $100. Just note that the Merrell Trail glove is aimed more at trail running and doesn’t have as open of a toe box.

A second option to consider would be the Xero Prio shoe that has a zero drop sole design that is made to contour the human foot without adding much padding at all.

Altra’s aim is primarily to give runners a foot-shaped toe box. Sounds like an obvious goal that every shoe manufacturer should have, yet it’s surprisingly not done in almost every running shoe.

The reason is because we (anyone in a culture that’s grown up with shoes) got used to shoes that push all our toes together into a curved arc.

Those who grow up without shoes have a much wider stance with their toes, and Altra wants to bring this back. Along with a more natural toe box, the Altra line of shoes are made with zero drop.

This leaves altra in a unique market, where every sub category of shoes that they make with this zero drop, wide toe box platform have no competitors.

The Solstice is Altra’s lightweight race-styled shoe that is similar to their Escalante Racer shoes.

If you really, really want the most race-ready shoe (we’re talking cross country racing), you’ll want to look at their Golden Spike shoes.

The Solstice leans more towards a daily trainer than a racer, but doesn’t have all the signs of a daily trainer like a high durability outsole or a reinforced heel counter.

The Altra Solstice is the first in the line of the Solstice running shoes which are pointed at getting runners the Altra platform without breaking the wallet.

Given how much I have already described the sole design in the intro paragraphs, I could possibly skip this sole section! But I won’t, since I actually have even more to say.

To recap though, this shoe has a zero drop sole (heel and forefoot stacks are both at 11.5 mm), and the layout of this sole widens around the toes to allow for your toes to splay outwards.

What I want to bring up is how this feels. If you’re like most people who have never run in an Altra shoe before, the lack of a standard sidewall to push your toes into each other feels concerning. It makes the shoe feel loose.

That’s ok, and just means you’re not use to letting your feet open naturally.

I found the shape to be pretty natural, and as a result, never had any chaffing issues between toes which sometimes happens when the toe box of a shoe is too tight (happened when I wore the Asics Gel-451 shoes).

As a result of this “toe freedom”, you may feel the need to clamp down on the laces. Be careful, you might over do it. I’ll get into the lacing system in the upper section later.

The sole is made of EVA foam, which does the job at being a foam for running shoes. I know that was a pretty bland way of describing the foam, but that’s how it sits within the shoe market.

Nike’s React foam, Saucony’s EVERUN foam, Adidas’ Boost Foam, and many other specialty foams stand above regular EVA, which is why Altra isn’t tooting their horn that the Solstice has EVA foam.

It just does the job and I can confirm it feels pretty average. What is not average is the durability of this foam.

Since Altra wants to keep the Solstice lightweight and inexpensive to manufacture, they went the Nike Free route and left pretty much the entire outsole as exposed foam.

So, you get a lighter, cheaper…simpler(?) shoe at the cost of durability, traction, an longevity.

What is frustrating is that Altra knew this would reduce the durability of the shoe and they did add a tiny patch of rubber, but only on the heel, and not on the toe where most other shoe manufacturers dab a bit of rubber to
keep the shoe lasting a bit longer.

Puzzling. Also puzzling was the thin little black plastic strip that looked like carbon fiber in the middle of the sole, but was actually not carbon fiber, and appeared to be more of a cosmetic addition to make the outsole look more interesting.

One other odd tidbit I found when testing these shoes was that the Altra logo on the insole rubs off onto your socks and stains them a bit.

I was able to get most of the neon green ink out of my socks (which to be honest is such a little issue since no one really cares what the bottom of your socks look like).

I’ve had this happen with other manufacturers, so it’s not limited to Altra. Just wished everyone stopped putting logos and drawings on insoles that either rip off over time or wear into your socks.

The upper feels race-ready. It’s a thin fabric in most places, and reminds me a bit of the Brooks Hyperion. Unlike the Brooks Hyperion, the fabric on the upper of the Solstice has a seam at the base of the tongue to change materials.

This puts a seam right around your foot from the ball of your feet to the bottom of your pinkie toe. Depending on how you fit your shoes, this could be a place for chafing.

I didn’t have issues myself, but I’ve read a few reviews that did have problems. I think this is partially because it’s hard to not overtighten the lacing system when you have such an open toe area.

Speaking of the lacing system, I found it to be adequate. Feels good around the top of your foot, the tongue fits well inside the shoe, but I didn’t like how abruptly the tension from the laces ends at the bottom lace.

This gives a somewhat clamped in feeling (not as bad as some of the Adidas Ultra Boost shoes), where you gotta go for a few runs to decide if this shoe is right for you.

You might find that exchanging the laces for something with a bit more stretch works for you as the standard laces don’t flex around.

Another aspect to the upper that stands out is the offset stitching that runs behind the heel and down the laces. This stitching holds in a puff of extra foam around the cuff of the heel and reinforces the top of the lace area.

As a result, you get a more comfortable heel without the added weight of foam going down the entire back section of the shoe.

Since the heel lacks all that extra foam and support in the bottom section, this shoe can’t be stomped into with the laces already tied and will instead collapse if you try that method.

You’ll just need to unlace and lace the shoe up normally, which is pretty standard for most lightweight racing shoes.

Considering that this shoe has limited durability in the sole, it’ll be smart to treat the upper nicely so you can get all the life you can out of the shoe.

As a 9 ounce race-ready shoe that wants to be a daily trainer, I hesitate to recommend this shoe and give it a 6/10 for the general audience.

HOWEVER, noting that the toe box is unrestrictive, the sole is zero drop, and the price is well under $100, my rating bumps up to an 8/10 for anyone who needs those additional features since there are no real competitors in the market.

For the right person, this shoe could be a winner, and I think everyone should keep an eye out for when Altra makes the Solstice 2s which will probably address most of my concerns.

We purchased a pair of Altra Solstice from runningwarehouse using our own money. This did not influence the outcome of this review, written after running more than 50 miles in them.

Visit ShopJackRabbit
This page contains affiliate links. As an Amazon Associate I earn from qualifying purchases.
WHERE TO BUY
LOWEST PRICE
$46

The Altra Escalante 2.0 is, without a doubt, my go to road running shoe at the ... (Read expert review)