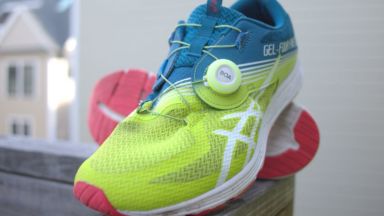 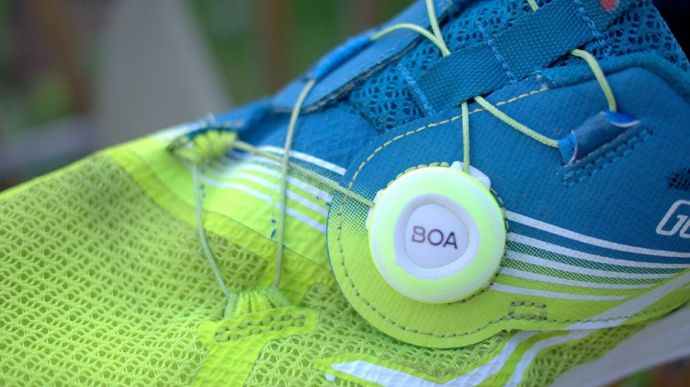 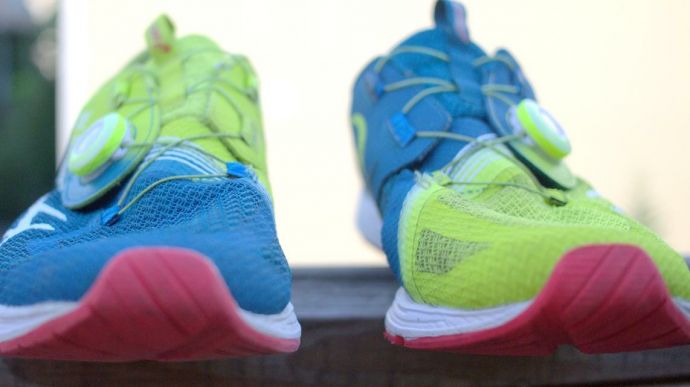 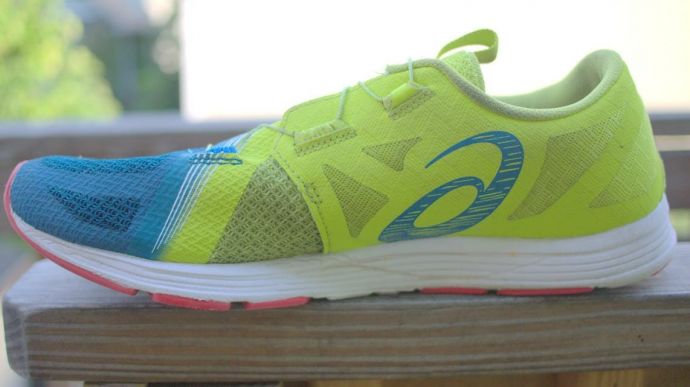 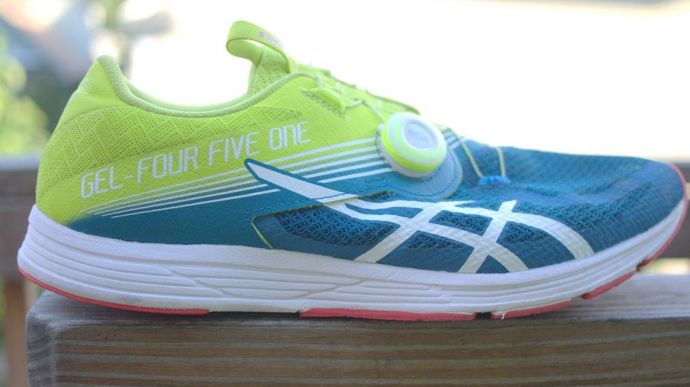 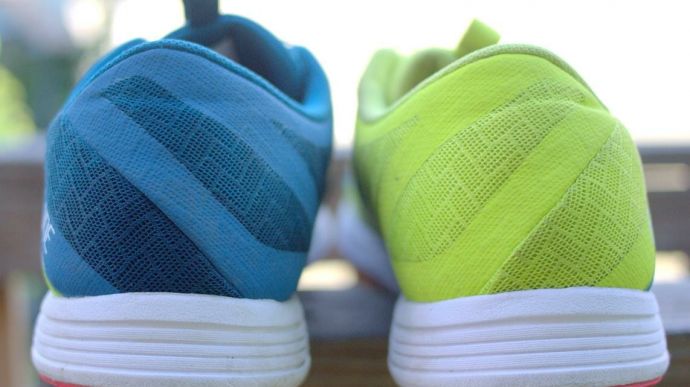 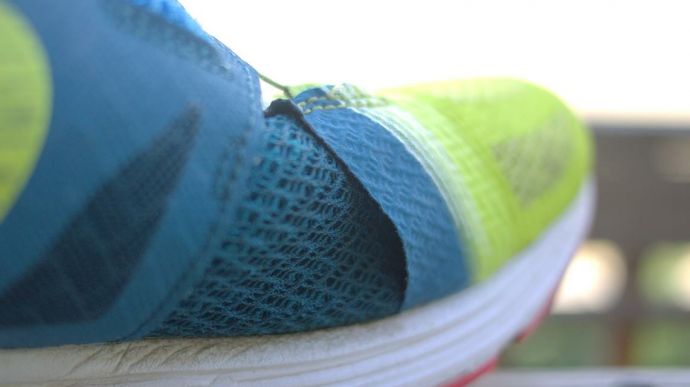 Asics’ GEL-451 shoe breaks a few standards in order to help you break records. An unconventional fit system paired with a very light and tight build gets you a shoe that aims to bring you faster times.
WHERE TO BUY
LOWEST PRICE
$228
SHOE INFO
Asics
Brand
451
Model
Racing
Type
6.80 oz. (193 gr.)
Weight
115 US$
MSRP
6 mm
Heel Drop
Aug / 2018
Release Date
WHO IS IT FOR
Lighter, faster runners who prefer to strike on their mid or forefoot.
Help me choose

Coming in just at 7.09 ounces, some might wonder what they’re giving up for this truly lightweight trainer. You still get a GEL insert, a moderate 16mm heel with a 10mm forefoot, and a decent amount of rubber coverage on the outsole.

How do they did they get a shoe so light with all this? They made the shoe smaller than it should be, so I’d say add about an ounce to the shoe if you’re comparing it to other fast race/trainer shoes with similar specs.

The Brooks Hyperion has a weaker upper, less rubber, a larger 10mm drop, but a lighter weight of 6.4 ounces.

If you’re focused on a shoe good for triathlons (which may be why you’re looking at this BOA system), take a look at the Asics Noosa FF2 which is 8.6 ounces, 10mm drop, similarly strong upper, and a much stronger heel in case you prefer to stomp your shoes on rather than tie/BOA tighten them.

It’s actually closest to the book, but only because they’re both referencing the popular notion that paper burns at 451 F (233 C, although the true temp varies depending on the paper).

Yeah, It’s not as straightforward as New Balance shoes that are just given a number and iterate from there, but it’s clever! There isn’t a previous model for this shoe, so we’re seeing the first of a kind here.

Asics does have a few other shoes using the BOA system, so maybe a close cousin of the GEL-451 is the Asics Dynamis, and the rugged uncle is the Asics GEL-Fujirado.

If we ignore the BOA system, other lightweight race-focused shoes by Asics are the DynaFlytes, Roadhawks, and Noosa FF2s (heavier, more cushioning+comfort).

Seems like Asics really wants the GEL-451 to stand out as their top choice for anyone that wants to try the lightest you can go with the GEL system.

This sole fits in with other racing/training hybrid shoes, where the sole is thin to keep the shoe lightweight, but also features enough rubber to handle the wear of daily training.

Your 16mm heel of spEVA foam and the GEL system is more than enough for forefoot runners, but might be felt as too little for heavier runners, especially those who heel-strike.

The 6mm drop is enough for most runners, and is probably the most drop this shoe can do, otherwise it’d be less than 10mm of material below your toes.

Overall, the foam on this sole feels race ready, with a responsive and firm bounce to it that isn’t catering to anyone that wants a very cushioned ride (see the Nimbus line if that’s your thing).

I regularly took these shoes on 8+ mile runs and never felt any pressure points or unusual blobs developing in the sole.

The GEL system is a thin, green, 1-2mm deep big-toe sized patch that goes right beneath your heel. The material feels like a dense neoprene, but doesn’t seem to stand out much when running.

I think it’s more of a gimmick at this size since the surrounding glue and stitching to hold it in is pretty uneven and overshadows some of the benefits of the GEL system.

In case you’re wondering how I found out what it feels like and what it looks like…it’s because I cut open the heel with a knife to figure out what the heck this GEL system was in such a small and lightweight shoe.

Considering that it didn’t hurt my running and I’m not much of a heel-striker, I’ll leave it up to you to decide if it makes a difference.

The layout is very Asics with a curved channel of foam down the center called the “Guidance-Line” , and a few patches of curved rubber around the outer edges of the heel.

The shoe flexes with ease, so I appreciate Asics sticking to a proven design on the rubber layout. Overall, I think this is an aptly designed sole for a racing style shoe.

I don’t normally start with the heel, but since I want to spend more time on other things, I’ll get this part out of the way first. The heel is normal.

There’s a bit of structure inside the base of the heel that keeps the shape of the shoe, a padded, breathable wrap around it that is comfortable, and a few overlays on the outside that give the shoe some style.

The shoe is a little more different as we work towards the front, as the heel design near the ankle dips down more than most shoes, which leaves you feeling a bit more exposed.

I suspect they have a lower edge to the upper at the side where the BOA system is in order to let the shoe grab you better at the forefoot without adding too much pressure around the heel. Took me a few runs to get used to that feeling.

The mesh is suited well for this shoe as it’s dense enough with dual layers for handling hundreds of miles, but has enough breathability to keep you comfortable during race day.

What I don’t like so much is the overlay design near the front. There’s a super-wide 1.25” overlay strip running up from the inside big toe to the top of the foot that separated from the fabric on one of my shoes.

It only happened on one of my shoes, but I suspect that it’s going to happen to both after enough miles. This same overlay runs beneath the wires of the BOA system.

Those wires rub heavily on this overlay, which causes the coloring to wear off. However, I don’t know of any easy way Asics can get around the quirks of the BOA system.

The BOA system. This is the focus of the upper. This is what makes people ask you “what is that?” as you’re tightening your shoes up in the gym locker room.

This is what makes you feel a little closer to the year 3,000 as you laugh at everyone struggling to use strings to tighten their shoes.

This is what will probably make you go with or avoid this shoe. Instead of laces, you have a little knob on the outside of the shoe that you twist to tighten the cords and pull up to release the cords.

The shoe is designed around this concept such that all the cords zig zag through fabric channels that connect to strong patches of the shoe which hold in your feet.

On your first fit with the BOA system, you’ll feel the shoe evenly close up on you as you tighten the dial.

This is not Asics’ specific, as BOA has their technology on other running shoes such as Adidas and New Balance, and they also have this tech in totally different venues like cycling and snowboarding.

So, BOA has proven itself in other industries, and this is Asics trying it out on a lightweight racer. I think it’s ok, but I want to be very blunt about what’s different so you can decide if you want it or not.

Standard laces let you tighten areas of the shoe differently, where you can have a very tight knot wrap around the toes, but a looser fit around the top of your foot. The BOA system only does even tension across your foot.

Laces let you really yank on them to give a very tight fit if you want.

The BOA system only gets as tight as you can twist a knob with your fingers (which can be an issue if you are coming off a bike ride with sweaty hands and really want to put a pair of running shoes on tightly for a fast run since you’re a triathlete).

The BOA system also has no loops to get caught on anything, but instead has a rubberized knob that can catch on fabric or plastic (yes, this is very specific, but I did have a plastic bag get caught on my shoe during a run because of this).

Laces give you basically infinite adjustability, but you have to knot and unknot every time you want to change something. The BOA system lets you go through 1mm increments as frequently as you want.

Lastly, the BOA system can go on faster than laces, but I found that I can easily put a shoe on quicker that’s been laced up if I stomp my feet into them, and can usually tie shoes about as fast as the BOA system ratchets the cords together.

For that reason, I went with the Asics Noosa FF2s for my sprint triathlon and not the GEL-451s.

You can gather that I don’t love this shoe, but also see something promising in it.

The pricing is pretty fair for lightweight racer that features BOA+GEL tech, and if you don’t mind going up a size (and subsequently having a heavier shoe than what they advertise), you can end up with a pretty good deal on this racer/trainer.

But be aware that the shoe may show some durability issues and that you could find annoying, and know that other shoes in the same class come in lighter.

Overall, I’d say this is worth trying out if you’re looking for cutting fast shoes, but definitely try a few others before deciding on this.

We purchased a pair of Asics 451 from runningwarehouse using our own money. This did not influence the outcome of this review, written after running more than 50 miles in them.

Visit ShopAmazon.com
Sorry - Product not found. Please try RunningWarehouse.Com to check in their assortment.
This page contains affiliate links. As an Amazon Associate I earn from qualifying purchases.
WHERE TO BUY
LOWEST PRICE
$228