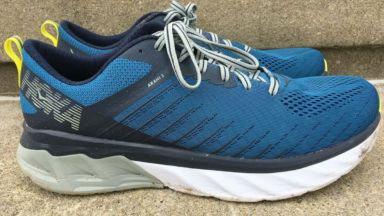 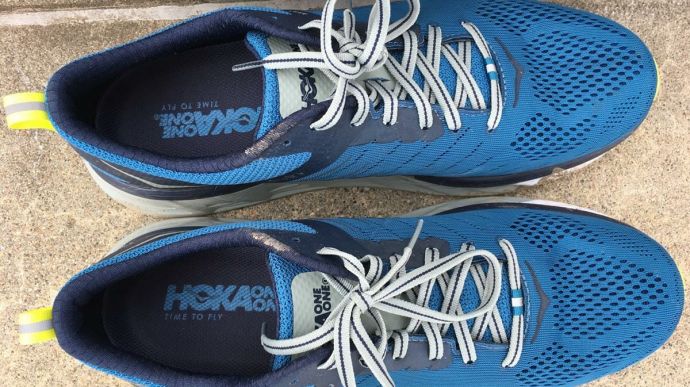 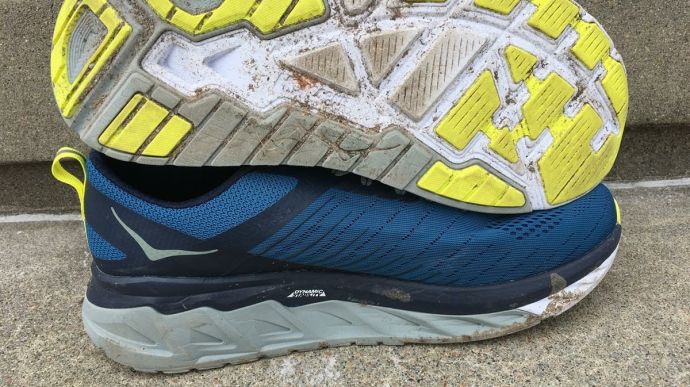 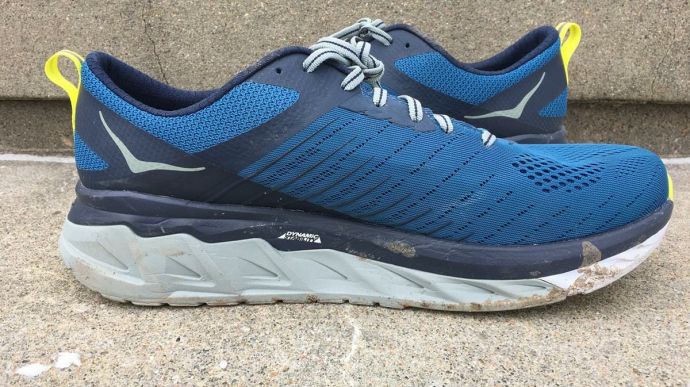 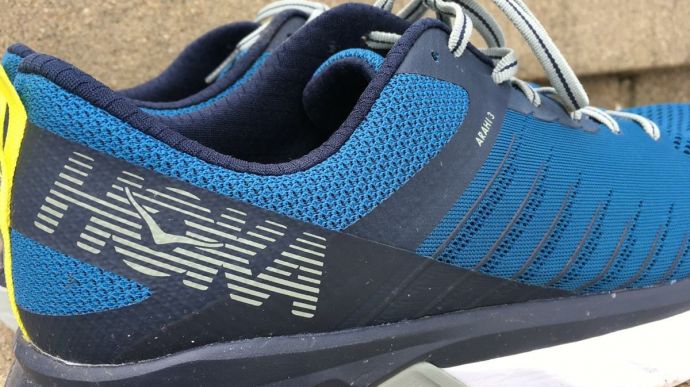 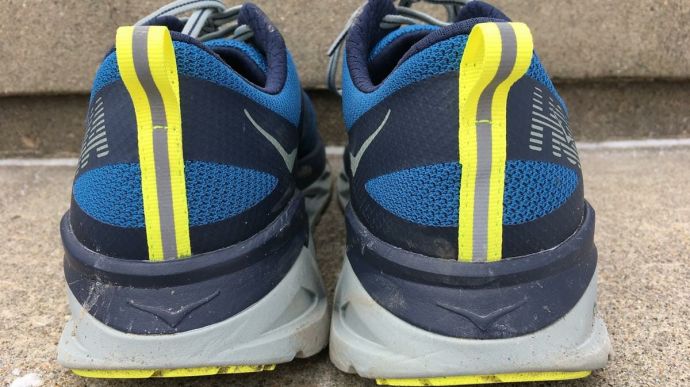 The Hoka One One Arahi 3 is a max-cushioned stability shoe built for versatility. The Arahi delivers a lightweight, responsive ride regardless of tempo or distance.

They can feel a tad unstable at times, but The Arahi is still a worthwhile addition to your rotation.
WHERE TO BUY
LOWEST PRICE
$130
SHOE INFO
Hoka One One
Brand
Arahi 3
Model
Stability
Type
9.6 oz. (272 gr.)
Weight
130 US$
MSRP
5 mm
Heel Drop
Arahi 2
Previous model
WHO IS IT FOR
A runner who is looking for a versatile, max-cushioned, lightweight stability trainer.
Help me choose

They started making neutral trainers for runners. That changed forever in 2017 when they released the first stability shoe – the Arahi – with their patented J-Frame technology.

The Arahi retail for $130. That price and performance bracket is shared with the Asics 2000, Brooks Adrenaline, Saucony Omni Iso, and the On Cloudflyer.

Hoka One One Arahi 3 First Impressions

Hoka One One Arahi 3 – Lateral Side

Their design impressed me as soon as I opened the box. They have the traditional big, lightweight midsole typical to Hoka. I enjoyed the two shades of blue on the upper with accents of popping neon yellow. They felt narrow in my hands.

They felt narrow on my feet, as well. The cushioning was what I have come to expect from Hoka. I was pleasantly surprised by their light weight.

The cushioning felt firm and unforgiving. The first run out of the box was a 4 and a half mile at a relaxed pace. The shoes felt firm and responsive which was a little unforgiving on my feet.

Hoka One One Arahi 3 – Sole Unit

Hoka One One Arahi 3 – Medial Side

Hoka midsoles are what set them apart from other running shoe brands. The midsole is dual density and is comprised of RMAT: rubber and EVA.

This mixture allows for more cushioning at less weight. The midsole feels incredibly responsive in the Arahi, to the point of feeling stiff on the first few runs.

Hoka employs proprietary J-Frame technology for stability. The J-Frame is a denser midsole cushioning, which has been made a tad denser in this version.

It starts at the forefoot and runs down the medial side of your foot before wrapping around your heel. The J-Frame is similar to Brooks’ Guard Rails technology.

I was used to this technology because I had just reviewed the Hoka One One Gaviota 2 which employs the J-Frame technology.

The narrowness and the height of the midsole made me feel a bit unstable. The bottom of the midsole is wide enough for landing but narrows as it climbs to the upper.

This also caused some snugness in my arches. This took some getting used to.

Another midsole technology Hoka employs with the Gaviotas is Meta-Rocker. This is a combination of a 5mm heel to toe drop along with a uniquely shaped midsole.

This lower drop resulted in a more natural stride with more frequent midfoot landings. The technology worked in harmony with the aspects of the midsole to make the Arahi a versatile trainer ready for any type of workout.

The bottom tread of the Arahi 3 was tested in all weather conditions, dry and wet, including ice and snow. It felt a tad slick in wet conditions.

They placed the right types of dense rubber in the right places. This provided the shoe with a bit of rigid feel but is broken in quickly.

Hoka One One Arahi 3 Upper Unit

The upper of the Arahi have been redesigned since the 2nd edition. The material used for the forefoot has changed to an engineered jacquard mesh.

This was done to make the shoe more breathable and provide your foot with a better fit. This is an upgrade to the materials used for the 1st and 2nd versions. It also makes the shoe more visually appealing.

The jacquard mesh is extreme flexibility and durable which makes it comfortable to run in from the first run. It is less structured than other running shoes out there because of it in just one piece upper.

I found the fit to be a bit snug from the midsole so the flexible upper allowed my foot some space while I ran.

The arch collar and the tongue have the thinnest layer of cushioning in a pair of running shoes especially in the heel collar, which could cause a loose fitting heel.

The heel counter remedied this because of how snug of a fit it provides. It locks your heel in throughout every type of run you take it on.

Since the tongue has thin cushioning and how tight I tied them I had a couple of runs early on in reviewing them where the tops of my feet hurt afterward.

The Arahi 3 upper does not have any seams because it is comprised of one piece. For this reason, I had no issues with hot spots or points of irritation while I was running in these shoes.

The snugness of the shoe continues through the arches. At times I felt like the arch area was a little too snug.

They ran true to size lengthwise. It took me a few times to get the lacing down. The snug fit continued in the toe box. This could be a drawback for those who have big feet or like a roomy toe box for pushing off.

Hoka One One Arahi 3 Conclusion

Hoka One One Arahi 3 – Heel

The Hoka Arahi 3 is one of the most responsive running shoes I have worn. This makes for a versatile trainer built for any type of workout.

At times the stability is slightly unsteady because of the height of the midsole and the narrowness of where the midsole connects with the upper.

The J-Frame and Meta-Rocker technologies complement each other providing you with more of a natural feeling and stride while running in these.

I noticed I had more midfoot strikes and smooth transitions to toe-offs. I would add the Arahis to my rotation for recovery and tempo runs.

I noticed when if I did two higher mileage in a row my feet would be feeling it by the end of the second run. They are firm and responsive ride which can sometimes cause your feet to want something a little plusher.

They are narrow throughout the shoe, especially in the arch. The snugness was there during runs but didn’t affect my stride, it just took some time getting used to.

I would have preferred to have just a little bit more width throughout the whole shoe.

You’d think running in the Arahi would feel like running in narrow tanks. It is impressive how cushioned yet lightweight Hoka makes their stability trainers.

The size of the shoe never entered my mind while was I running in them. The 5mm drop along with the weight help with this aspect of the shoes. I felt like I could push it in the Arahis challenging myself to go just a little faster.

This was my two pair of Hoka One One I have run in and I will say I am convinced they are a brand more runner should try. Their technologies they employ truly complement each other and make each run enjoyable.

If you are looking for a versatile trainer built for any type of workout you want to throw at them, and you are feeling like you want to try something new, you would give the Hoka One One Arahi 3 a try.

We purchased a pair of Hoka One One Arahi 3 from runningwarehouse using our own money. This did not influence the outcome of this review, written after running more than 50 miles in them.

Hoka One One Arahi 3 Price Comparison

Similar shoes to Hoka One One Arahi 3

Hoka One One Arahi 3 Review