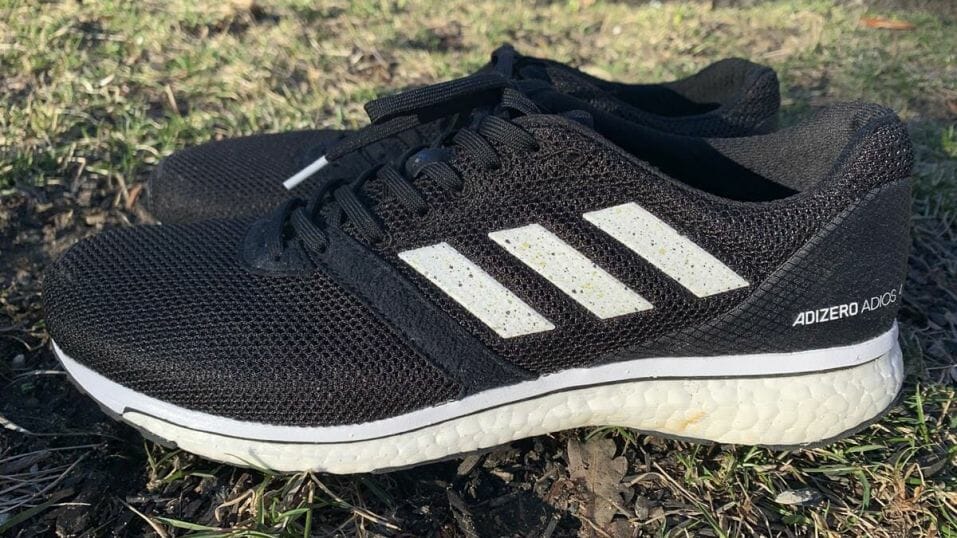 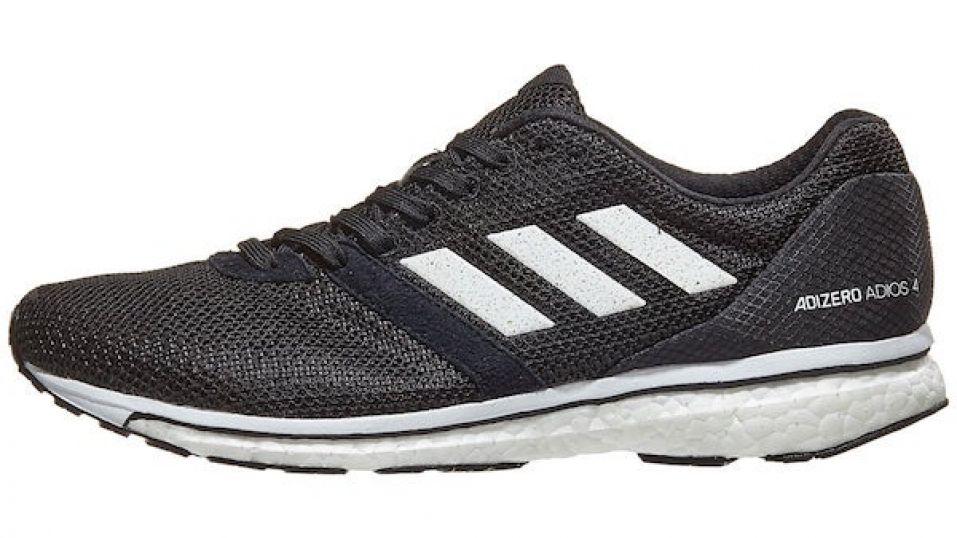 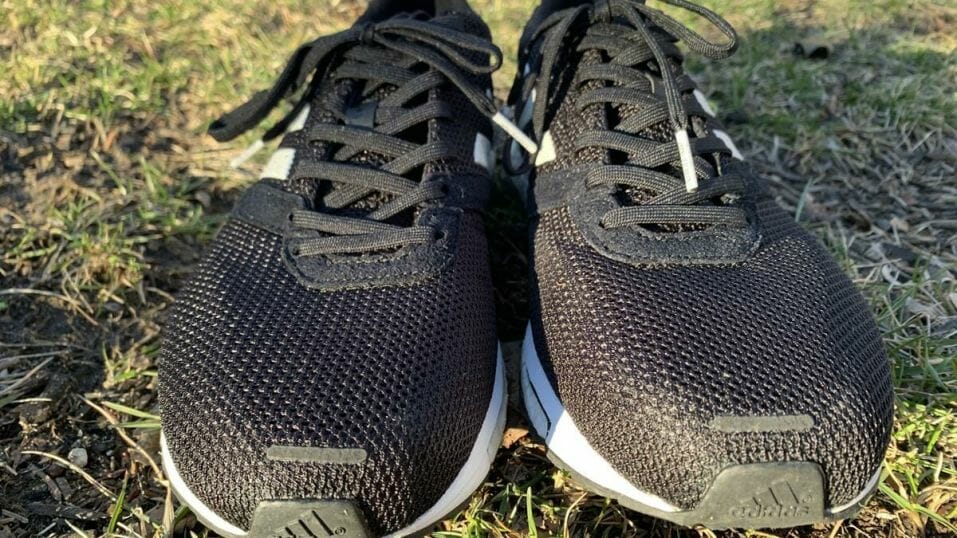 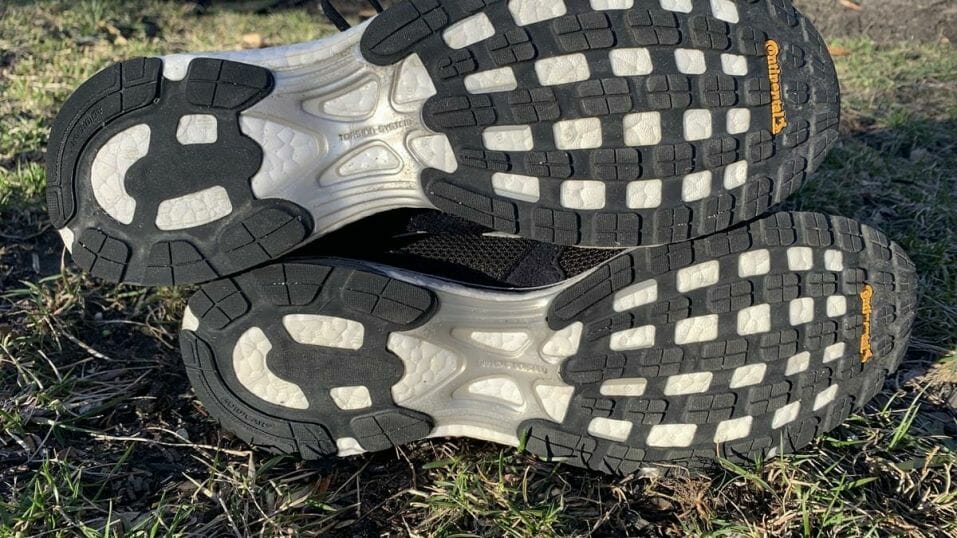 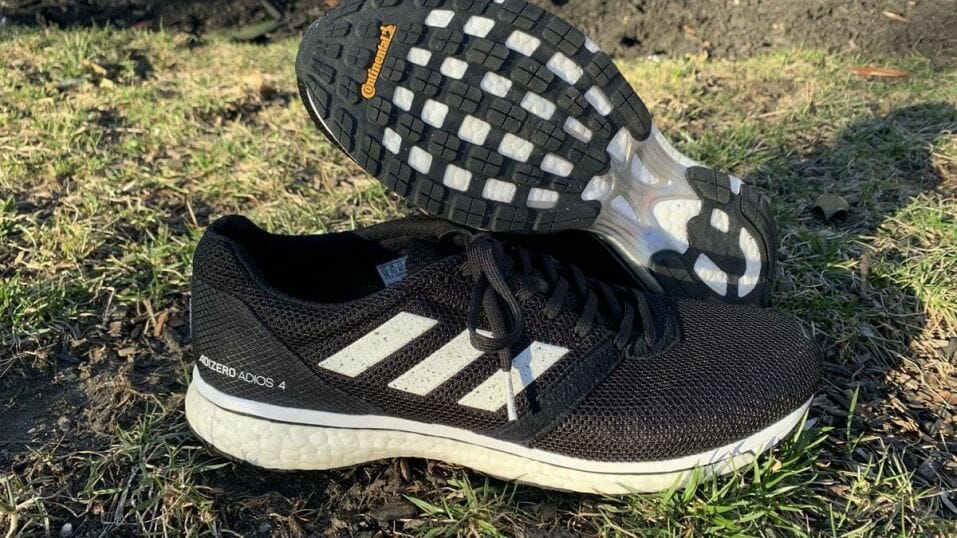 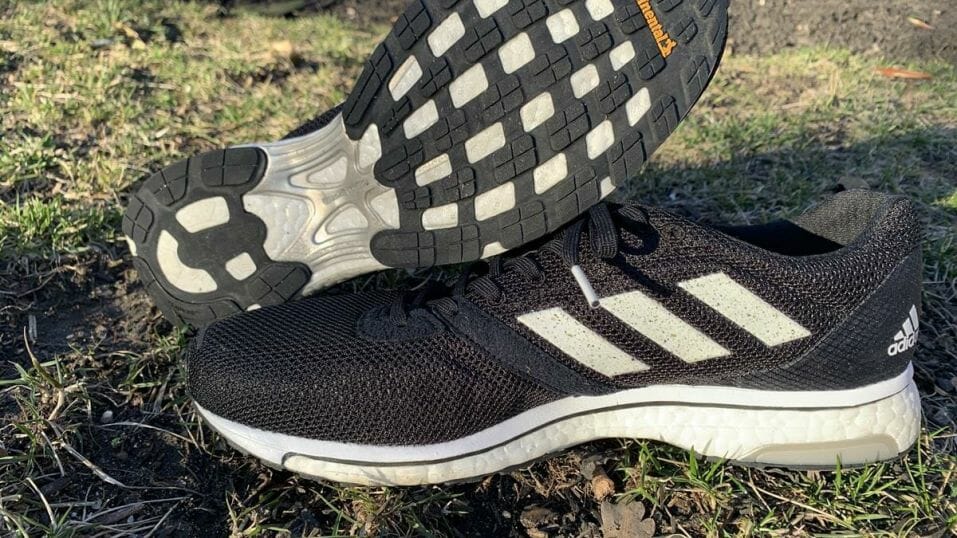 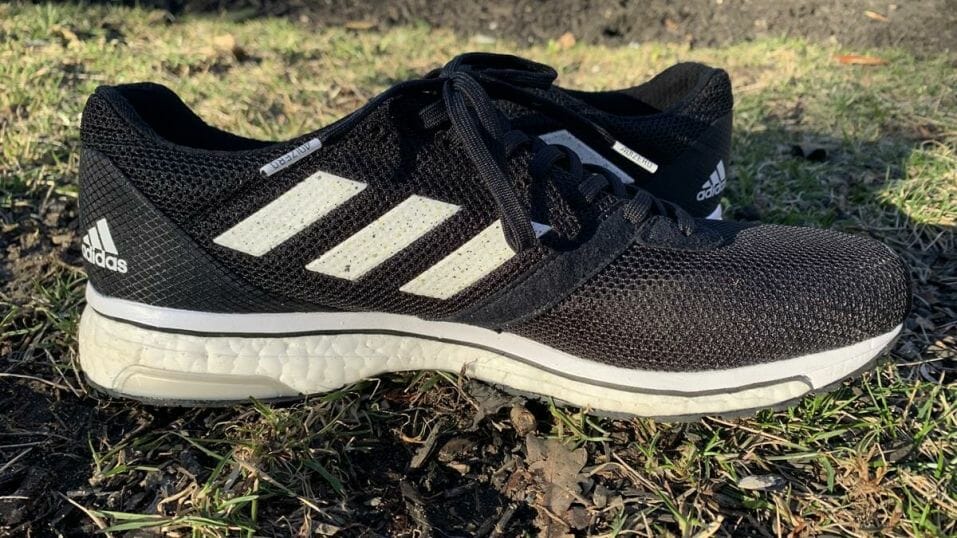 Much like previous versions the Adidas Adios Boost 4 is built for speed and racing. Updates to the fit from previous versions make the shoe more comfortable while maintaining the performance driven Boost midsole.
WHERE TO BUY
LOWEST PRICE
$64
SHOE INFO
Adidas
Brand
Adizero Adios 4
Model
Racing
Type
7.9 oz. (224 gr.)
Weight
140 US$
MSRP
10 mm
Heel Drop
Adizero Adios Boost 3
Previous model
WHO IS IT FOR
The Adidas Adios Boost 4 is for neutral runners looking for a racing shoe that will maintain durability for speedwork training.

This shoe is without a doubt performance driven and a fantastic option for runners who are looking to push the pace over any distance of a run.
Help me choose

Before the running world set their sights on a marathon in under 2 hours. And before the recent shift to a competitor’s lightweight racer, the Adidas Adizero Adios ruled the Marathon record books.

Yes it matters who race the race, a ton in fact, but it should always be noted that for years the Adizero Adios in multiple iterations was the shoe worn by the fastest times any human had ever covered 26.2 miles.

The Adizero Adios 3, was known as the shoe that held the marathon world record.

Lightweight, packed with BOOST foam, no frills just speed, the Adios 3 was a must buy for runners looking for a racing shoe with enough durability to double as a training workhorse.

The Adizero Adios 3 was a shoe considered to be amazing with very minor caveats such as the weight, though it felt lighter on the foot, the price, and a very tight fitting upper.

Enter the Adidas Adizero Adios 4. A true testament to “if it ain’t broke don’t fix it.”

Small tweaks to the upper sitting on a very similar midsole and outsole adjust the Adios 4 to be a more comfortable feeling on the foot compared to the previous model.

When I received the Adios 4 and took them out of the box the shoe looked very similar to the Adios 3.

Light and a simple look, with the same appearance to the midsole and outsole, I immediately put the Adios 4 on to see how the new upper would fit.

Slightly bigger but still tight in the midfoot, still shallow in the toe box, but still a very locked down feeling.

Having still owned the Adios 3 I then compared them and noticed that while the Adios 4 is still a very tight feeling it is certainly more comfortable in the midfoot than how tight the 3rd version fit.

The first run in Adios 4 felt very similar to the previous version, which given the success of the Adios 3, was a pleasant feeling to have.

There was one caveat to be covered in the sole description of this review. Much like the previous version the Adios 4 felt a lot lighter than the indicated weight of the shoe (8.0 oz).

All indications by Adidas is that the Adios 4 is built on the same midsole and outsole as the Adios 3.

I can confirm that the outsole is the same, including the continental rubber for durability and traction, the plastic torsion system piece in the midfoot area for stability and a responsive feeling, and the Adiwear rubber in the heel for durability.

The midsole is comprised of BOOST foam material for a lightweight and responsive feeling, with plastic pieces for targeted areas of stability on the inner heel exactly like the Adios 3.

However, I believe that there is one slight difference between the Adios 3 and Adios 4. The toe spring, or how high up the toe box curves at the front of the shoe, is higher in the Adios 3 than in the Adios 4.

There are benefits and drawbacks to higher and lower toe springs. Higher springs can give a shoe a ‘rocker’ feeling if too high, almost a falling forward feeling.

A lower toe spring gives a more natural feeling to the shoe and allows for more force to be generated off the front of the foot.

The biggest change to the Adios 4 from the 3rd version is in the upper. The Adios 3 was comprised of a breathable thin mesh with suede reinforcement material and tongue that was connected at the base held in place by the laces.

The Adios 4 upper is comprised of a thicker, still breathable, mesh overlay. There is only suede accents at the base of the laces and wrapping the foot across the first eyelet.

The heel cup of the shoe is stiffer than the previous version and the adidas stripes are added in a more modern synthetic style, opposed to the “throwback” look that the Adios 3 had.

Another small change is in the additional eyelet used for a lace lock lacing is set closer to the top eyelet, though most runners will likely not use this eyelet as the fit on the Adios 4 is so tight.

Because of how tight the upper is, especially at the suede midfoot overlay, it may not even be worth sizing up as the shoe will still feel tight even a half size larger.

Personally I like to really feel tightly locked in for racing and speedwork but if shoes are naturally tighter on your feet, than you can seriously consider the ½ size up.

The tongue on the Adios 4 is sewn to the upper both at the base and in the midfoot to prevent the tongue from sliding while running.

As well, a small difference from the Adios 3 to the Adios 4 is reducing the amount of the already limited reflective elements.

Frankly, this does not matter as the Adios 4 is meant for speedwork and races and reflective gear is more important than reflective shoes in terms of making yourself visible.

The Adidas Adizero Adios 4 is a minor tweak to an already amazing shoe. If it ain’t broke don’t fix it, and it is clear that when designing the Adios 4 that Adidas wanted to keep what worked well in the 3rd version.

The biggest gripes with the previous version was how harshly tight the shoe was and runner’s wished that the shoe would have been lighter given its use.

The weight of the Adios went unchanged, though the shoe never actually felt heavy under the foot in either version. It feels light and fast.

The updates to the upper however are a huge benefit to the Adios 4 as while the shoe still feels incredibly tight, it is much more comfortable than the previous version.

The spot of the most discomfort is where the suede overlay exists on the eyelet and no form of lacing the shoe would prevent the tightness.

As for the changes to the toe spring, most runners will not really notice a difference with the exception of extreme heel strikers or extreme forefoot strikers.

I imagine the heel striker would prefer the previous version, forefoot striker the newest model. One of negative thoughts of the previous model was the price of a shoe intended for racing and speedwork.

Considering the other popular marathoner racer, the Nike Vaporfly 4%, is over one hundred dollars more expensive than the Adios 4, I will not knock this shoe for the price and value.

I truly believe that the best two marathon racing shoes on the market are the Adidas Adizero Adios 4 and the aforementioned Nike Vaporfly 4% flyknit.

Now comes in the question, I am running a marathon and I want the best possible shoe to race it. What shoe do I pick?

Very simply speaking the Adios 4 is much cheaper, give a close to the ground, quick light and snappy feeling. The Boost material will continue to feel comfortable mile after mile.

Additionally the Adios 4 can be used for significant training miles whereas the Nike racing option is not nearly as durable.

Where the Vaporfly may appeal to runners is in how light and responsive it feels for how much cushioning you get, with the snap of the plate in the shoe.

Full transparency I race my marathons in the Vaporfly 4%, half-marathons in either the Vaporfly 4% or Adios 4 depending on how many miles my Vaporfly pair has on it given its durability, and the Adios 4 for every race less than a half marathon.

Overall the Adios 4 builds on an already amazing shoe by addressing one of the biggest gripes with the previous version. This keeps the Adidas Adizero Adios as one of the best road racing shoe options on the market.

We purchased a pair of Adidas Adizero Adios 4 from runningwarehouse using our own money. This did not influence the outcome of this review, written after running more than 50 miles in them.

Visit ShopAmazon.com
This page contains affiliate links. As an Amazon Associate I earn from qualifying purchases.
WHERE TO BUY
LOWEST PRICE
$64