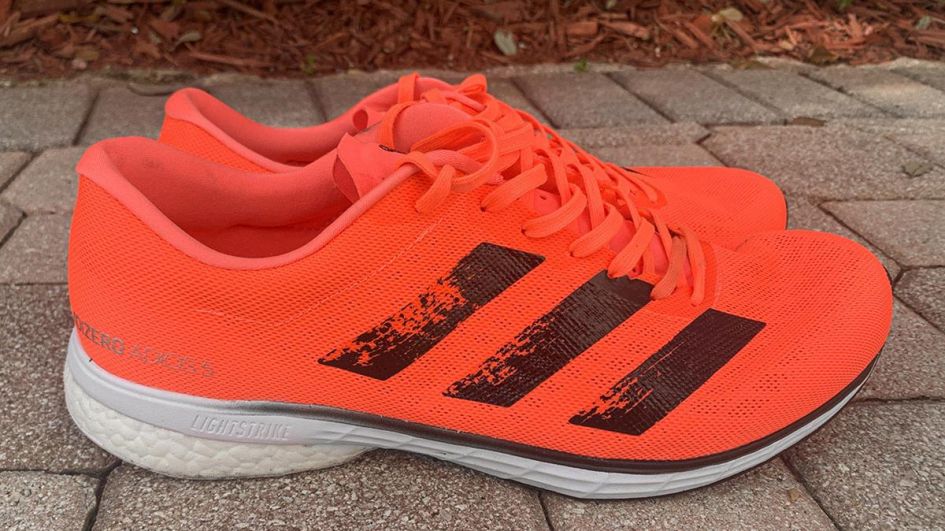 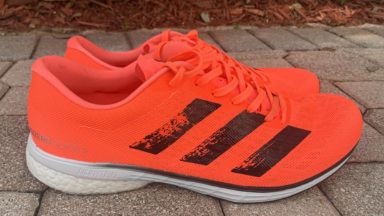 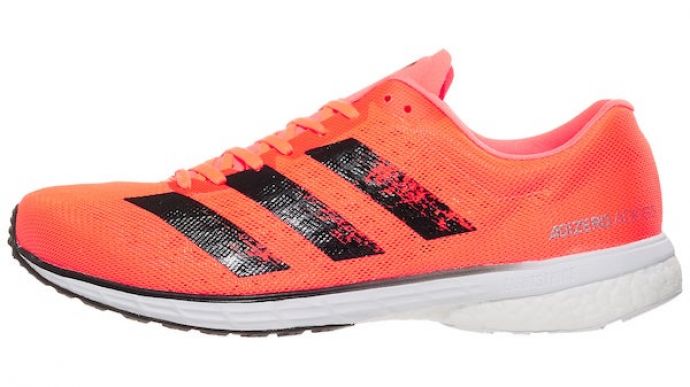 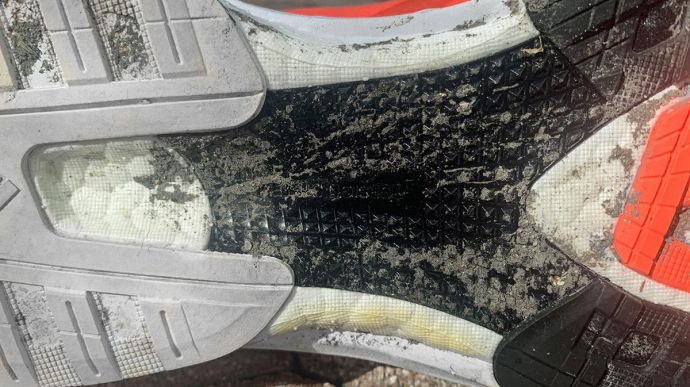 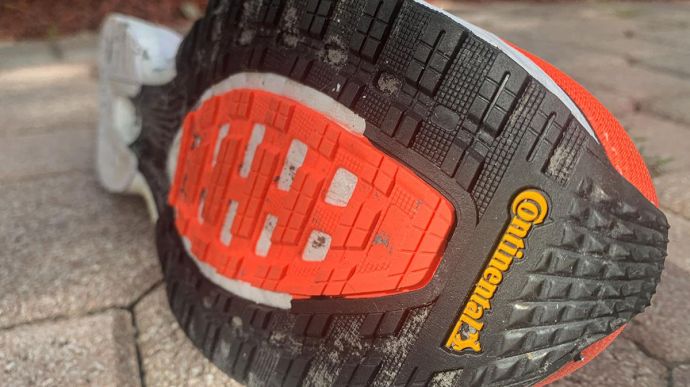 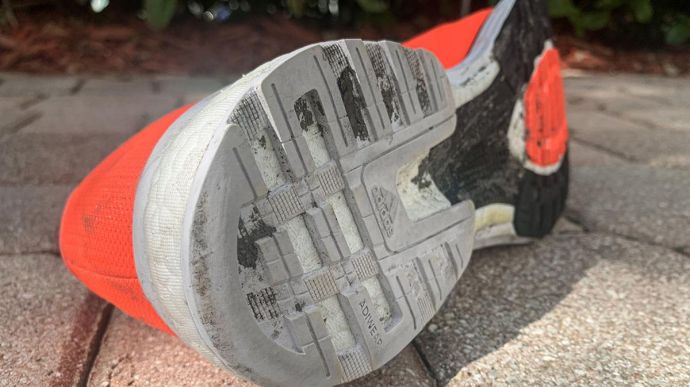 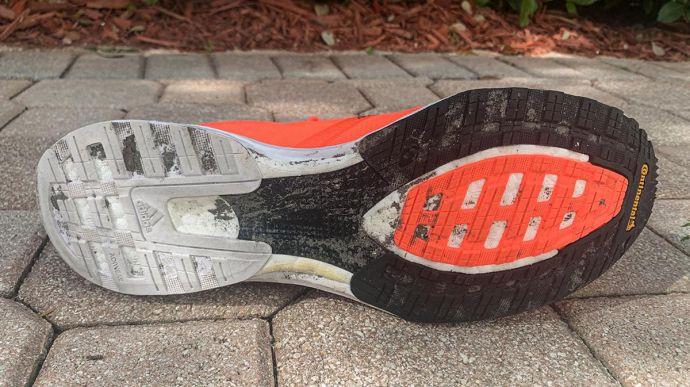 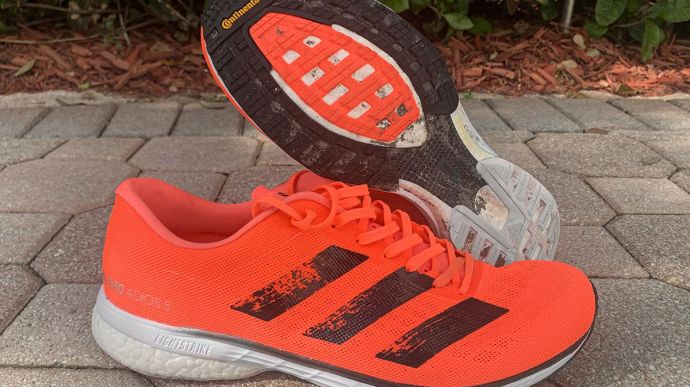 Built with the same concept of the previous versions of the Adizero Adios racing shoe, the Adizero Adios 5 introduces a new foam to the Adidas running lineup, while losing a step in the snappiness and magic that was the Adios.
WHERE TO BUY
LOWEST PRICE
$74
SHOE INFO
Adidas
Brand
Adizero Adios 5
Model
Racing
Type
7.8 oz. (221 gr.)
Weight
140 US$
MSRP
10 mm
Heel Drop
Adizero Adios 4
Previous model
WHO IS IT FOR
The Adidas Adios Boost 5 is for neutral runners looking for a racing shoe that will maintain durability for speedwork training.

This shoe is all about performance over longer distances and would do well as a rotational shoe for distance training.
Help me choose

And only one year after the 4th version is a redesigned and revamped Adidas distance racing shoe.

The Adidas Adizero Adios 5 makes major changes to both the upper and the sole unit while maintaining the low to the ground, no frills just speed mentality that made the previous versions so great.

In the world of distance racing shoes there are two paradigms that a shoe design might fit into.

There is the world of the maximum lightweight cushioning with a stiff plate in the midsole, see the Nike Vaporfly line and the mass release of competitors to that shoe this year by New Balance, Saucony and more.

And then there is the low to the ground, snappy and responsive shoes. The Adidas Adios line, New Balance 1400 and 1500 shoes, and the Nike Streak shoes for example all define this low to the ground no frills shoes well.

The Adios 5 in unchanged in the principal of what the shoe is for, however the changes within this racer make for a different shoe than its predecessors.

The short of the changes, a new upper mesh, internal strap/bootie, new midsole materials, and changes to the plastic torsion system from the previous versions. If that sounds like a brand new shoe, well it is.

As a runner who has put hundreds of miles on various pairs of Adios 3s, still to this day, and tested the Adios 4s for this website, I was very excited to test out the latest Adios.

Unboxing the Adios 5 it was immediately clear that this shoe is not the Adios 3 or Adios 4 that runners of the previous versions have become used to.

The insole is largely labeled to let you know that this shoe contains Lightstrike, a new foam covered later in this review, and the sole unit is clearly a mix of the new foam and boost foam.

In full disclosure, on the first run in the Adios 5, the new mesh upper caused immediate blisters and rubbing on the top of my foot at the ends of the metatarsal leading to my big toe on both feet.

The shoe was uncomfortably narrow and shallow for me which is an issue I’ve only experienced in one other shoe while testing, the first Hoka One One Cavu which also had a very thick and stiff upper.

Outside of the upper fitting issue, running in the Adios 5 confirmed the suspicion that this is not the same shoe that the Adios 3 and 4 were.

The Adios 5 sole unit is completely revamped from previous versions of this racing shoe. The biggest chance is the introduction of Lightstrike foam within the sole of this shoe.

Lightstrike, a foam first introduced as a basketball specific cushioning, but now branched into the running lineup, seems to be a lighter replacement to Bounce foam that has been used in previous Adidas shoes.

While Lightstrike, with a firmer feeling than Boost foam, makes up most of the sole, there is a section of Boost foam which is thicker in the heel tapering down towards the middle of the foot.

As I felt that fore-foot striking runners would appreciate the feel of the Adios 4 over the 3 due to a more aggressive toe-off, the Adios 5 seems to have shifted back and will provide a more comfortable ride for mid to heel-striking runners.

Similar to previous models, there is a plastic torsion system at the bottom of the midsole to create a more responsive ride, as well as the adiwear rubber in the heel and continental rubber in the forefoot.

The outsole design of these rubbers have changed, but they still provide good traction on the ground, while the plastic torsion system is larger than the previous models. This all creates a firmer ride than the Adios 3 and 4.

The heel collar is thin but built firmly and the upper overall locks in the foot well. The mesh used for the upper is thick yet breathable.

However this mesh upper is a stiff material which caused irritation for me, regardless of how I laced these shoes, near the toe and flexpoint of the Adios 5.

The overall last of the shoe is still long like previous models providing ample room in front of the toe compared to most running shoes.

When finding out that I would be testing the Adios 5 I was admittedly excited. I loved the 3rd and the 4th versions of this shoe and have purchased multiple pairs of the Adios 3 when I can find them on a good sale.

Upon wearing the Adios 5 and testing this updated shoe, I went from excited to disappointed. In fact, I actually found a pair of those discounted 3s which I purchased last year, finally took off the tags and began to run in them.

What I found is that the Adios 5 lacks the snap of the previous models. Whereas the older shoes would feel aggressive and slim, ready for a race, the Adios 5 felt more like trainer that just so happened to be a race day option.

The Lightstrike foam seems promising for running shoes but I am not sure it belonged in this particular shoe.

With the success of the Adidas Boston line I find myself wondering what runner would be better off buying the Adios 5 over the Boston 8 since the Adios doesn’t have the same snappiness that previous models have exhibited.

When you consider the past success of the Adios line and the fact that there are limited options for distance racers that focus on being slim, sleek and no frills, there is potential to generate excitement for this type of shoe.

However for me, the Adios 5 falls flat, lacking the pop of previous versions while being too slimmed down to be worn daily for most runners.

If you are a fan of the Adios 3 or 4, or are just looking for a slim race day option, I suggest trying to find the older models at a discounted price over the newest.

We purchased a pair of Adidas Adizero Adios 5 from runningwarehouse using our own money. This did not influence the outcome of this review, written after running more than 50 miles in them.

Visit ShopAmazon.com
This page contains affiliate links. As an Amazon Associate I earn from qualifying purchases.
WHERE TO BUY
LOWEST PRICE
$74
AVAILABLE ON SALE:Previous model $85