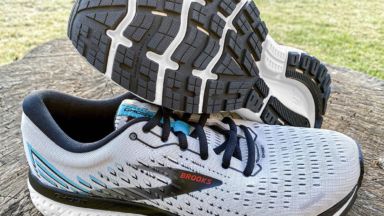 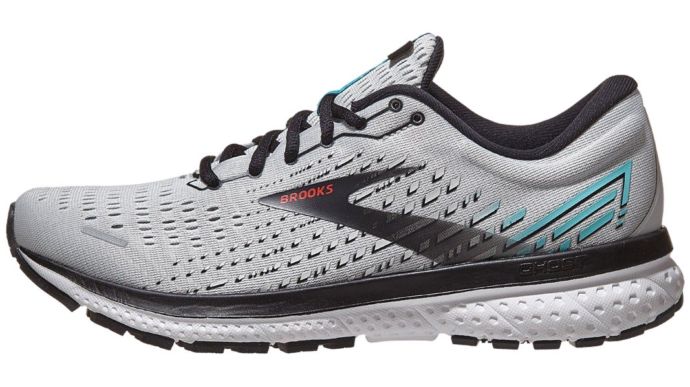 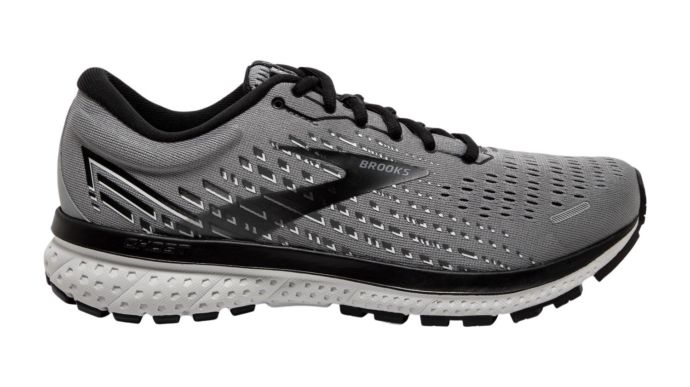 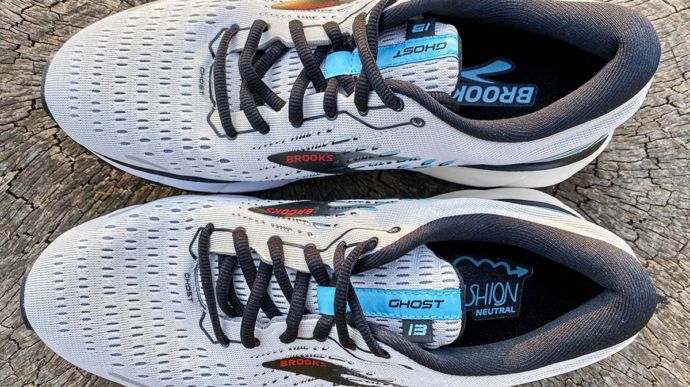 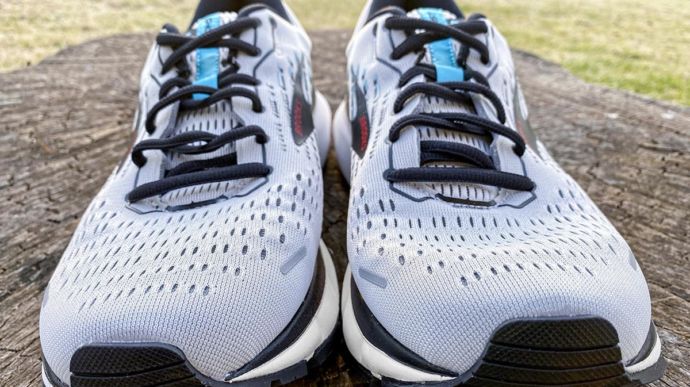 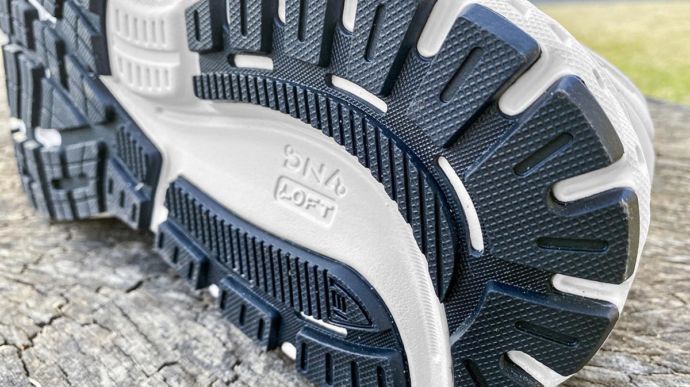 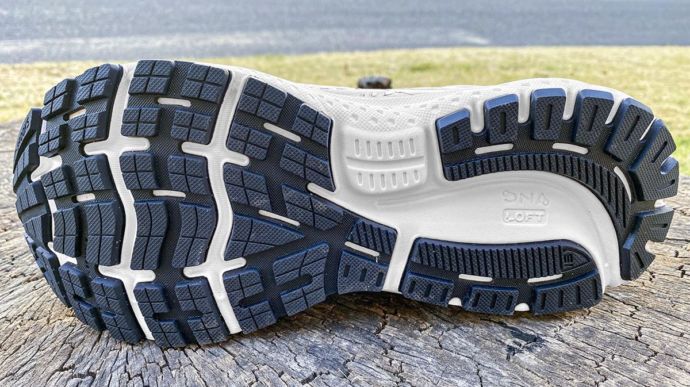 The Brooks Ghost 13 is a comfortable neutral daily trainer with stable and smooth ride transitions. Its strength is its plush upper which has been updated with Air Mesh for an even more breathable and cooler ride.

DNA Loft foam now extends the entire length of the lateral side of the midsole but the Ghost 13 still maintains the same ride character that Ghost fans know and love.
WHERE TO BUY
LOWEST PRICE
$89
SHOE INFO
Brooks
Brand
Ghost 13
Model
Cushioning
Type
10.1 oz. (286 gr.)
Weight
130 US$
MSRP
12 mm
Heel Drop
Brooks Ghost
Family
Ghost 12
Previous model
WHO IS IT FOR
Whether you’re a beginner just starting out or a seasoned marathon runner looking for a dependable trainer to eat up training miles, the Brooks Ghost 13 is a reliable option.

The battle of the daily trainers is now more fierce than ever before. It’s such an important battle because a big chunk of a company’s shoe sales come from their mid-tier daily trainers.

A daily trainer is arguably the most important shoe in a runner’s shoe rotation because the bulk of their running is done in them.

When I choose a daily trainer for my shoe rotation, it has to have a plush, comfortable upper, a midsole cushioned enough for distances up to 25 kilometres and an outsole capable of lasting over 800 kilometres.

The Ghost was born in 2008 when it replaced another neutral trainer called the Brooks Burn. Since then, Brooks’ strategy when it comes to the Ghost series is to make small, incremental changes from year to year, rather than doing complete overhauls.

This strategy is so effective because Ghost loyalists can ease into the new model while still recognising older technologies from previous models.

Change is good but it should be a slow evolution, rather than a rushed mutation.

The Ghost has in my mind always been the most refined of all the daily trainers.

The Ghost feels like it could cost at least $20 more than its sticker price because of the materials that Brooks uses and even though the Ghost is not Brooks’ most expensive neutral trainer.

It feels far more luxurious than any other mid-range everyday trainer.

Out of the big five daily trainers which consists of the Pegasus, Cumulus, Ghost, Ride and 880, the Ghost 13 was the last to be released in 2020.

Most of the daily trainers have received sweeping updates which have improved them drastically and are all worthy upgrades of their predecessors.

So how does the Ghost 13 stack up against the other giants of the daily training category and is this a trainer that I would use in my shoe rotation?

When picking up the Ghost 13, and seeing the dimpled DNA Loft all along the lateral side, I thought to myself that the Ghost now looks more similar to the top of the range Glycerin than ever before.

I liked the fun 80’s style graphic overlays on the midfoot and rearfoot of the Ghost 13 more than the all-business style upper of the Ghost 12.

When putting the shoe on for the first time, my foot sank into the plush, thick BioMogo sockliner. Sink-in softness has always been a trademark of the Ghost series.

I’m normally in-between shoe sizes so I made the decision to go with the bigger size because Ghost uppers are so padded and plush.

This ended up being the wrong decision. I could feel my feet swimming in the roomy upper of Ghost 13.

I hate the feeling of wearing clown shoes so I had to exchange them for a half size smaller. Overall the fit is much more roomy than previous versions of the Ghost.

My first run in Ghost 13 was one of familiarity. The Ghost personality came through strongly even in my first couple of metres in them.

If you were looking forward to a big change, you will be disappointed but if you didn’t want the Ghost to change much, you will be very happy with the Ghost 13.

The midsole of the Ghost 13 is a dual foam setup of DNA Loft on the lateral side and BioMogo on the medial side. The two foams are very similar in density so the ride is still very balanced and stable.

You don’t even notice the new full-length DNA Loft part of the Ghost 13 when running and the midsole is co-moulded so there are no seams or gaps where the two foams meet.

The Ghost 13 rides medium soft, just like the Ghost 12 and the Ghost 11 and most of the other Ghost versions. The medium-soft ride results in an incredibly versatile shoe which all daily trainers strive to achieve.

I like the Ghost 13 most for easy-paced runs between 10 and 25 kilometres but its midsole is not overly soft so it can handle the occasional tempo outing although its substantial weight might be a problem.

I think the midsole foam that Brooks uses in the Ghost 13 still lags behind in responsiveness compared to the explosive forefoot of the Pegasus 37 with its Zoom Air unit or the Ride 13 with its bouncy TPU-EVA blend Pwrrun midsole.

DNA Loft is the newer of the two midsole foams in the Ghost 13 but it feels very similar to BioMogo. I hope that Brooks transitions to their new DNA Flash foam which is lighter and much more responsive.

The 12mm heel-to-toe offset of the Ghost is more than the other daily trainers and is the perfect shoe for beginner runners who tend to strike on their rearfoot.

The extra foam in the heel provides extra shock absorption to cushion heel strikes. I also felt that the gentle slope of the 12mm drop helped roll me through my stride and made transitions feel more effortless.

Stability is great in the Ghost 13 and it remains one of the most stable neutral trainers money can buy.

Its midsole has no lean bias as its density is not overly soft and the foot sits below the black part of the midsole which acts as a guidance rail to keep your foot centred through transitions.

On the outsole of the Ghost 13 are two different rubbers: harder wearing rubber in the heel and softer blown rubber in the forefoot.

The rubber that Brooks uses is a soft, spongy density and the thickness of the outsole rubber is thicker than on most shoes.

There are three wide flex grooves which span the entire width of the shoe underneath the forefoot which results in a very flexible Ghost 13.

Durability is the one weakness of the Ghost 13.

Its EVA midsole will lose cushioning over time while its outsole rubber wears down faster than super hard-wearing rubber like the BRS 1000 found on the Pegasus 37 or AHAR+ on the Cumulus 22.

I have run less than 100 kilometres in my pair and the outer lateral heel area rubber is already half as thin as the original thickness. At this rate, I’ll hit midsole foam by 200 kilometres.

The upper of the Ghost 13 is where Brooks has every other brand beat. It has a new soft engineered mesh which they are calling Air Mesh.

My first run was on a cold winter morning and I could feel the icy wind on my feet so it’s definitely airy and breathable.

The rest of the upper is what you come to expect from a Brooks Ghost. It has generous amounts of foam in its tongue, collar and heel.

Its tongue is not gusseted but no tongue slide occurs thanks to its wide wings which hold it in place.

The stiff internal heel counter does a good job in locking the heel in place. There are also double last row eyelets for heel-lock lacing but I never needed them.

The toe box of the Ghost 13 is spacious and there is plenty of room for your feet to splay. There is also an internal toe stiffener for structure and support in the toe area.

This is the reason that the Ghost 13’s forefoot feels much roomier than the Ghost 12’s.

The high-volume forefoot means that the standard width Ghost 13 is more suited to wide-footed runners who need extra room for their feet to splay.

If you have narrow feet you may need to purchase the narrow version. It also comes in wide and extra wide versions in addition to the narrow and standard widths.

There are reflective strips on both sides of the toe box and on the heel for night time visibility.

I can’t mark the upper of the Ghost 13 down for anything except the fact that it doesn’t have a gusseted tongue.

It’s very strange that Brooks decided to not give the Ghost 13 a gusseted tongue when they have clearly not cut costs anywhere else on the premium upper.

Brooks once said that if Goldilocks ran in a shoe, it would be the Ghost. The Ghost 13 isn’t the softest or the most engaging shoe on the market and it doesn’t do one thing particularly well.

The Ghost stands out because it has no major flaws and is such a well-rounded shoe.

From a beginner runner just starting out, to a marathoner, the Ghost 13 has something for everyone. It can do easy runs, recovery runs and even tempo runs if you don’t mind its hefty weight.

So how does the Ghost stack up to the other highly rated everyday trainers? I wouldn’t say that it’s my favourite but it has the most balanced ride and has the best upper.

It’s also the most stable of the bunch but it falls behind the pack in midsole and outsole durability.

For me, I prefer a daily trainer with higher levels of responsiveness and durability.

If I could change anything about the Ghost 13, I would make the outsole rubber more durable and I would add in a gusseted tongue for an even better upper fit.

We purchased a pair of Brooks Ghost 13 from runningwarehouse using our own money. This did not influence the outcome of this review, written after running more than 50 miles in them.

Visit ShopRunningWarehouse.Com
This page contains affiliate links. As an Amazon Associate I earn from qualifying purchases.
WHERE TO BUY
LOWEST PRICE
$89
AVAILABLE ON SALE:Previous model $58