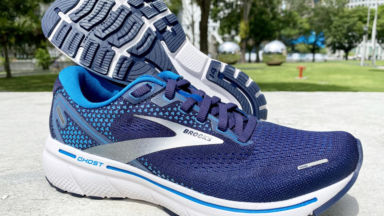 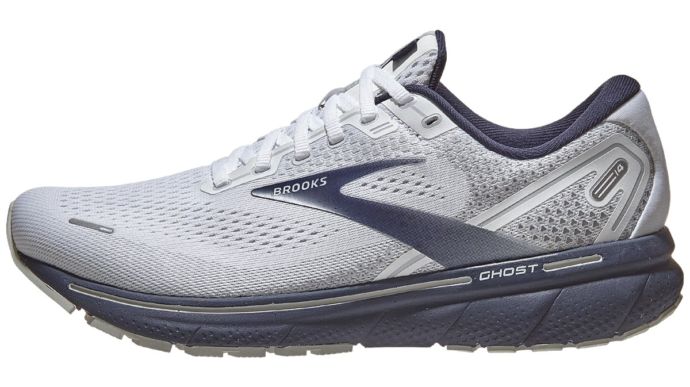 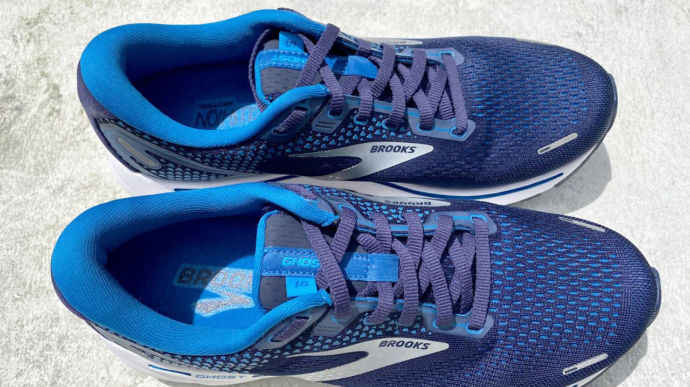 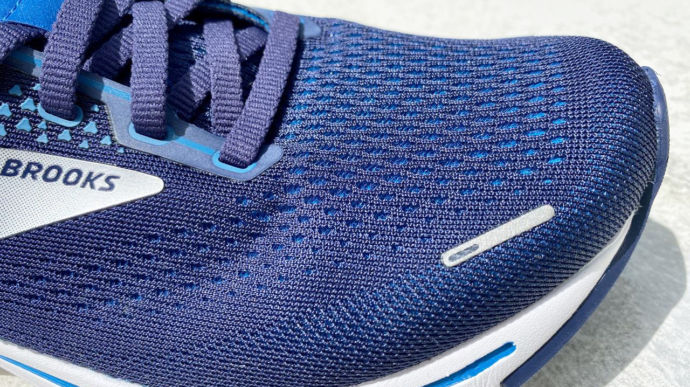 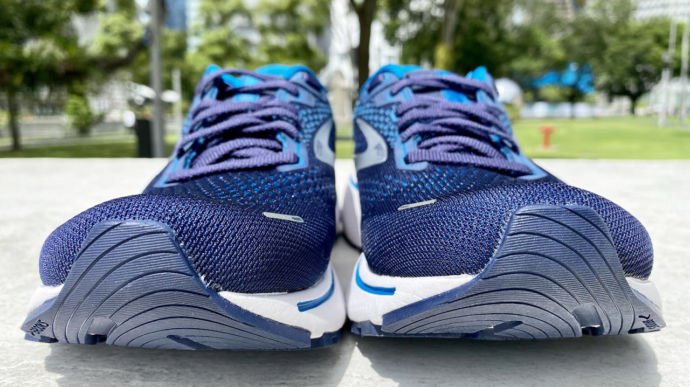 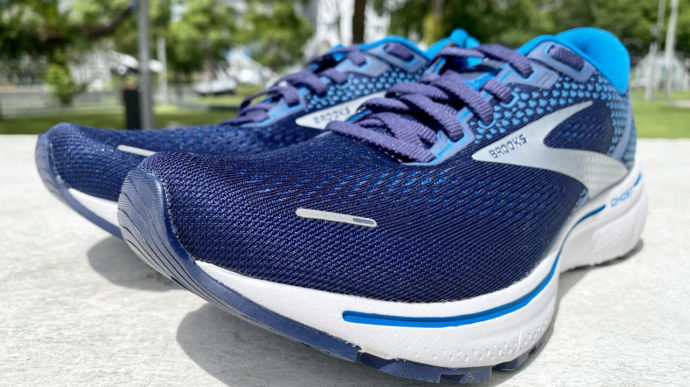 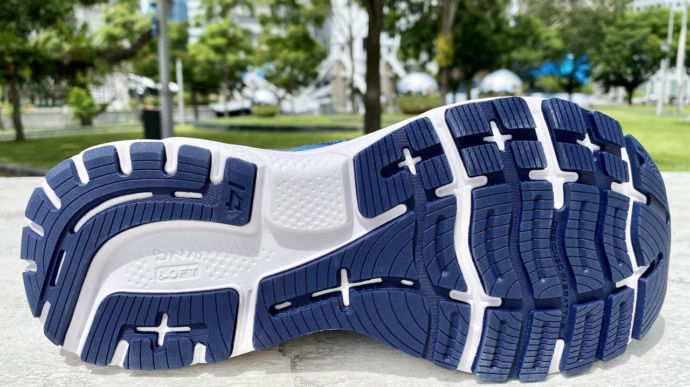 The Ghost 14 is far from an exciting daily trainer but it's a dependable workhorse that has the perfect balance of long-distance cushioning and ride stability. It excels on long-distances and steady-paced runs.

Version 14 has been updated with a more streamlined upper and a snappier forefoot, making it a small improvement over version 13.
WHERE TO BUY
LOWEST PRICE
$78
SHOE INFO
Brooks
Brand
Ghost 14
Model
Cushioning
Type
10 oz. (283 gr.)
Weight
130 US$
MSRP
36 mm
Heel
8 mm
Heel Drop
Brooks Ghost
Family
Ghost 13
Previous model
WHO IS IT FOR
If you're looking for a dependable trainer for comfortable daily runs and you don't mind a bland ride, the Ghost 14 is a great choice.
Help me choose

The Brooks Ghost is probably the blandest running shoe in existence. If the Ghost was a pizza, it would be a Margherita.

There’s nothing wrong with a Margherita: it’s a proven flavour combination and it goes down well. You won’t get a funky-tasting processed sausage or cheap, frozen seafood on your Margherita.

They know what they like, and the Ghost gives them that, year after year.

It’s also a popular recommendation to beginner runners because it’s such a safe option.

It’s neither too soft nor too firm, its upper is comfortable no matter what foot type you have and it has a remarkably stable ride for a neutral shoe.

This saying aptly applies to the Ghost 14 because it has a new upper, midsole and outsole yet it still rides the same as previous Ghosts.

Whenever the new version of a Ghost gets released, it’s never that exciting because you know that it will be very similar to the previous version. There are many reasons to buy the Ghost but excitement is not one of them.

When I put the Ghost 14 on my feet for the first time, it felt luxurious and slipper-like. The upper felt less puffy and more streamlined than the Ghost 13.

My first run was an 11 km easy run and there were no big surprises. It felt like a typical Ghost: smooth, stable and consistent.

There were portions of the run where I was able to go faster than easy pace and at the end of the run, my average pace was about 30 seconds faster per kilometre than my normal easy run pace.

This version of the Ghost felt like it wanted me to go faster than easy pace whereas previous versions felt sluggish and cumbersome.

The Ghost 14 felt much more nimble and agile than the Glycerin 19 which I tested a couple of months ago.

While this may seem like a big update on paper, the ride experience is strikingly similar to the Ghost 13.

In fact the two versions are so similar that when I did an A/B test run with one version on each foot at the same time, I really had to concentrate to notice a difference in ride.

Compared to other mid-range, non-plated daily trainers, the Ghost 14 is firmer than the Pegasus 38, Clifton 8 and Cumulus 23 but because of its thick chunk of midsole foam, it still feels very well cushioned.

The Ghost 14 has a massive amount of midsole foam to protect your feet.

It measures 36 mm in the heel, which is just 4 mm lower than the maximum stack height allowed for World Athletics events but I doubt any elite runner will be running a World Athletics marathon in a Ghost.

If you wanted to run a marathon in the Ghost 14 and you weren’t worried about your time, you definitely could. I did 42 kilometres in it and it performed brilliantly.

It’s one of the best shoes I’ve tested for long runs because of its excellent stability, high level of cushioning and its comfortable upper.

Due to its medium soft midsole which is not excessively plush, weight transfers feel efficient and I found it really easy to pick up the pace in the Ghost 14.

I enjoyed it most on steady-paced runs, slightly faster than easy pace, between 4.50 and 5.30 minutes per kilometre.

One thing to be aware of is that the midsole of the Ghost 14 is plain EVA so there isn’t much energy return with each footstrike. The midsole does provide a very well-padded ride with plenty of foot protection.

The only time I ever run in a 12 mm drop is when I’m testing the Ghost. While it might put some people off, I don’t mind the high drop.

It puts my feet on a steeper downward ramp and I feel like it helps me through transitions more than shoes with a less aggressive drop.

The negative of having such a high drop is that I feel my heel catching the ground slightly as I come through my gait cycle but it’s something I get used to as I put more mileage on it.

There are two different types of rubber used on the Ghost 14’s outsole: soft rubber on the forefoot and harder, more durable carbon rubber on the heel section.

One of the forefoot grooves is now partially filled with rubber. This makes the forefoot less flexible and feel more snappy during transitions.

The initial wear of the outsole rubber, especially on the heel area shows rapid wear after the first couple of runs, however after that, the wear tapers.

After 80 kilometers in the Ghost 14, I’ve noticed that outsole durability is however below average compared to other daily trainers so if you’re particularly hard on outsoles, stay away from the Ghost.

The outsole rubber Brooks uses on the Ghost is relatively soft so traction is great on most surfaces.

For me, the upper is always the highlight of any Ghost and the Ghost 14 is no different.

It has generous foam padding in the tongue, heel tab and collar which pillow your feet. The Ghost really is hands down the most comfortable of all the daily trainers.

The tongue is still not gusseted so it slides laterally. The premium tongue gusset is only featured on the top of the range Glycerin.

The Ghost 14 gets brand new flat laces which replace the old oval laces. I find that the flat laces distribute pressure more evenly and they make the entire lacing area flatter and more performance oriented.

The biggest update is the change of mesh. It feels thinner, more breathable and gives the Ghost 14 a more streamlined feel but it’s still a warm upper that’s more suited to cooler climates.

The thinner mesh also makes the forefoot feel more spacious but it fits true to size. It’s available in 4 different men’s widths and 3 women’s widths if you need them.

I experienced no hot spots, uncomfortable pressure or rubbing while in the Ghost 14, even during a 5 hour run. I also experienced no heel lift. It’s a superb upper made of quality materials.

When I think back on my time testing the Ghost 13, running in it felt like a chore. The small changes that Brooks has made to the Ghost 14 have definitely improved it and surprisingly, I enjoyed every run in the 14.

Version 14 feels more versatile and more performance-oriented than version 13 because of its streamlined upper, snappier forefoot and its new full DNA Loft midsole.

The ride of the Ghost 14 isn’t fun or exciting but what it excels in is consistency. You can pick up any Ghost and have peace of mind knowing that it performs very similarly to its predecessor.

The $20 more expensive Glycerin 19 has a more comfortable upper but it has a relaxed fit compared to the Ghost 14.

The Ghost is much more versatile because its midsole isn’t as soft as the Glycerin 19’s so it’s easier to pick up the pace in the Ghost. The Ghost 14 feels like a sportier version of the Glycerin.

The Glycerin used to be the only Brooks trainer with a full DNA Loft midsole but now that the Ghost 14 also has one, the Ghost represents much better value.

I’m pretty sure that the Ghost 14 will also be a bestseller and a fan favourite. The Brooks Ghost is living proof that sometimes the blandest item on the menu can also be the most popular choice because it’s the safest option.

We purchased a pair of Brooks Ghost 14 from runningwarehouse using our own money. This did not influence the outcome of this review, written after running more than 50 miles in them.

Visit ShopRunningWarehouse.Com
This page contains affiliate links. As an Amazon Associate I earn from qualifying purchases.
WHERE TO BUY
LOWEST PRICE
$78
AVAILABLE ON SALE:Previous model $89