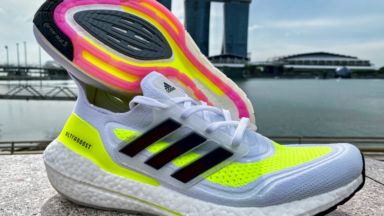 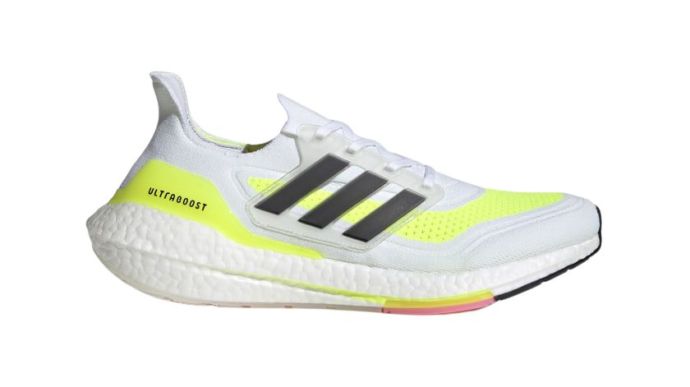 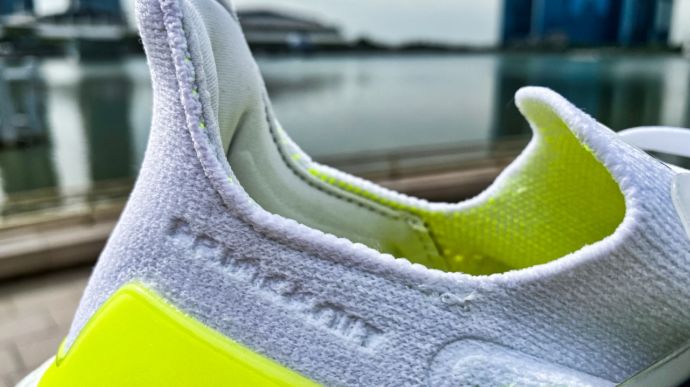 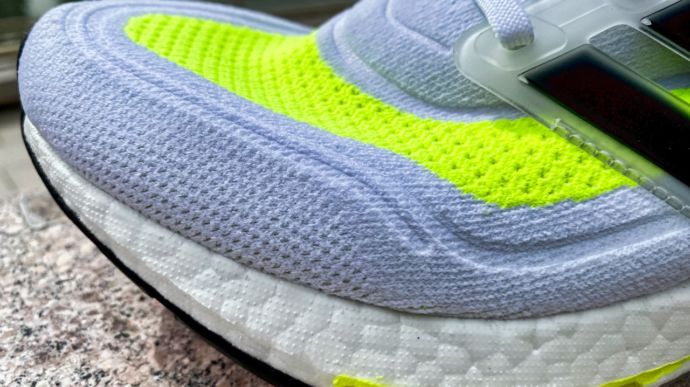 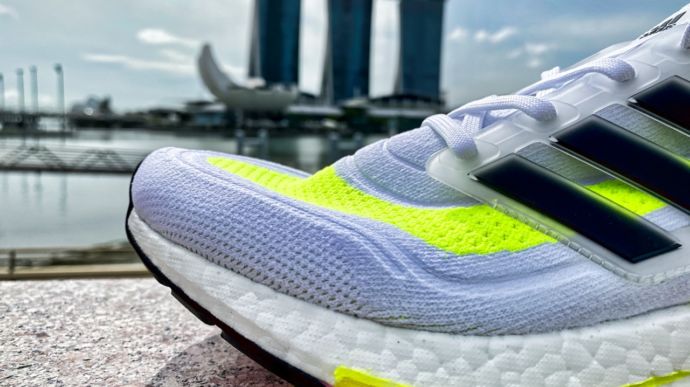 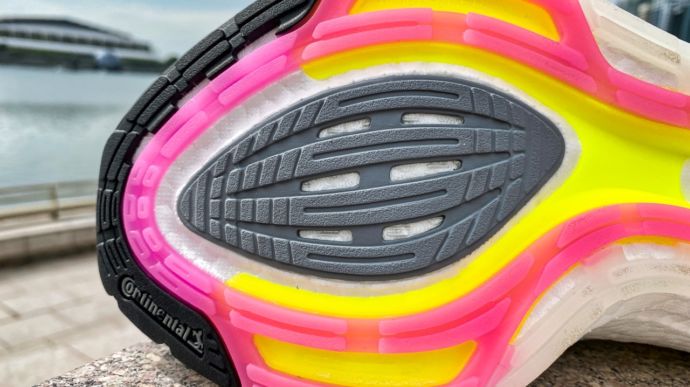 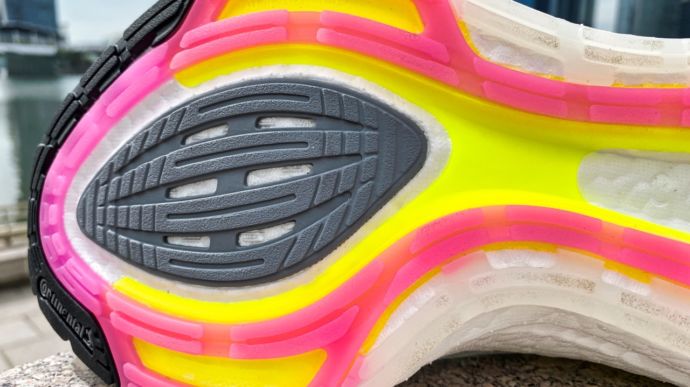 The Adidas Ultraboost 21 is a heavy, firm but cushioned trainer with a durable outsole and smooth ride transitions.

It's been revamped from the ground up but the loose heel and relaxed upper limit the Ultraboost 21 to only straight-line running at relaxed paces.
WHERE TO BUY
LOWEST PRICE
$13
SHOE INFO
Adidas
Brand
Ultraboost 21
Model
Cushioning
Type
12 oz. (340 gr.)
Weight
180 US$
MSRP
10 mm
Heel Drop
Adidas UltraBoost
Family
UltraBoost 2020
Previous model
WHO IS IT FOR
If you're a casual runner who wants an attractive shoe that can handle the occasional slow run and price isn't an issue, the Ultraboost 21 might be your shoe.
Help me choose

Is there any running shoe that looks as good as the Ultraboost with a pair of skinny jeans and a fitted tee? Probably not.

And there’s a very good reason for that: running shoes are built for running and not to look good going to the mall.

Ever since version 1 of the Ultraboost when Adidas paid Kanye West to wear an all white pair on stage, sneaker heads have adopted the Ultraboost as a lifestyle sneaker.

The Ultraboost has always blurred the line between performance trainer and lifestyle sneaker.

Adidas markets the Ultraboost as a serious running shoe but the fact that they release space collaborations with NASA and funky metallic-coloured midsoles proves that Adidas wants the Ultraboost to also be a trendy casual shoe.

The Ultraboost is Adidas’ most popular shoe so the formula is obviously working for them; they can kill two birds with one stone.

My favourite Ultraboost was the very first version. At the time, not many trainers were using TPU midsoles so there was nothing like it in the market.

It was very soft, springy and comfortable at the same time. Its one weakness was that its outsole wore down like butter because this was pre-Continental rubber days.

In the versions that followed, focus of the Ultraboost shifted more towards being a lifestyle sneaker as the upper became more relaxed.

More brands started using TPU midsoles so it didn’t make sense to stick with the expensive Ultraboost that didn’t feel like a performance running shoe anymore.

The Ultraboost 21 has been redesigned from the ground up with a new outsole that features crystal rubber, a midsole with more Boost and an updated upper too.

With all the changes made, is the Ultraboost 21 now a serious performance running shoe and how does it stack up to the previous versions?

When I first saw a leaked image of the Ultraboost last year, I thought that there was a possibility that it could be a fake, concept image because it looked like a ridiculous amount of Boost in the heel.

When I saw more images and videos closer to the launch date, I got really excited because they confirmed that the initial leaked image was accurate.

The radical new midsole design was completely different from any previous Ultraboost.

When they arrived and I picked them out the box, I was expecting them to be weighty but they felt even heavier than what I thought them to feel. They have picked up over an ounce of weight compared to the Ultraboost 20.

My first run in them was 10km and they didn’t impress me. They felt clunky, stiff and firm. I expected them to be a lot softer but the Boost underfoot felt firm albeit cushioned at the same time.

Foot landings were very loud because of the crystal rubber on the outsole and made a sound like a horse trotting down the road.

They also reminded me of when runners wear ankle weights while running to build strength and endurance. With the Ultraboost 21’s you have the ankle weights built right into the shoe.

On the positive side, transitions felt smooth because of the new bevelled heel and the outsole configuration.

Is Boost still a relevant midsole foam with the arrival of Lightstrike and Lightstrike Pro? In my opinion, no.

It’s definitely the heaviest of the three Adidas foams by a country mile and the Ultraboost 21’s hefty weight severely limits its use to only easy and recovery runs.

You might think that the entire heel is one massive chunk of Boost foam with a drop that looks like it could be 14mm however there’s only a 6% increase in Boost and the drop is only 10mm.

The foam in the heel shoots up around the heel, creating sidewalls or rails that cup the heel. This setup allows the foot to sit inside the midsole rather than on top of it like with the Ultraboost ST.

Adidas made the foam firmer which they claim makes it 20% more responsive. This change doesn’t make much sense because the Ultraboost is supposed to be their plushest, most comfortable trainer.

There are other shoes in their lineup designed for responsiveness like the Boston, Adios and SL20.2.

Because of its loose heel and heavy weight, the Ultraboost 21 is only suitable for straight line runs at relaxed paces slower than 5.40 per km.

Now this might be a good thing because it stops you from running too fast on easy days but you expect a little bit more versatility from a $180 shoe.

The furthest run I did in the Ultraboost 21 was 18km. I really struggled to run long distances in them because the ride felt so firm and flat. It felt like the Boost midsole had been compressed, making it denser and duller.

The LEP system which stands for Linear Energy Push is the plastic shank found under the midfoot that extends both into the forefoot and rearfoot.

This is nothing new to Adidas trainers: it’s the same as the Torsion system but it has just been renamed. It provides midfoot stability and structure by making the shoe stiffer.

Adidas says that the Ultraboost 21 is 15% stiffer than the previous version which creates more propulsion.

I don’t think the Ultraboost 21 needs the extra propulsion because it’s not designed for fast running. The LEP system in the 21 makes the shoe feel too stiff and clunky.

I really like the new outsole design of the Ultraboost 21. There’s now plenty of crystal rubber and not as much Continental rubber. Crystal rubber does contribute to the firm ride though.

The layout of the rubber placement reminds me of the Asics Novablast outsole but the channels in between the rubber are not as deep.

Durability has been excellent in my time of testing it and there is very little wear showing on the crystal rubber.

Ride transitions are now much smoother because the outsole layout is flat compared to the small, raised pillar design of the previous versions.

Stability is very good in the Ultraboost 21. It has a wide midsole base and its firm midsole results in minimal lean bias.

The heel clip and the raised Boost side walls cupped my heel securely so foot strikes felt very planted.

I don’t think the Ultraboost will ever be a true performance trainer while it still has a bootie construction.

The problem with bootie constructions is that it makes it impossible to implement double last row eyelets so heel lock lacing can’t be done.

The upper of the Ultraboost reminds me of the first version of the React Infinity Run Flyknit: both have loose heels resulting in subpar foot lockdown.

Nike fixed the problem in the second version of the React Infinity Run Flyknit by changing the bootie construction and the shoe improved tenfold. Will Adidas do the same with the Ultraboost 22? It’s unlikely.

The Primeknit+ upper on the Ultraboost feels very soft, smooth and comfortable but it’s a bit on the warm side as breathability is not great.

The plastic cage makes a comeback and is not as intrusive. It’s not a full plastic cage like on versions 1-3 because the cage is not connected to the midsole.

There is a 0.5mm gap between the cage and the midsole while the cage is stitched on.

The cage didn’t bother me at all and I found midfoot lockdown to be good. I found the overall fit true to size but the loose heel was the big weakness.

I don’t mind heavy shoes for easy runs because it makes it easier to run fast when you switch to a lighter shoe for tempo days.

The problem with the Ultraboost 21 is that the heavy Boost midsole makes the shoe bottom heavy so there is lots of heel lift because of the loose heel.

Like a car with a powerful turbo engine that has no seatbelt, I felt as if the midsole wanted me to run faster but the upper was preventing me from doing so, leading to very frustrating runs.

There’s the issue of the price as well. $180 is a crazy price for a max-cushioned trainer that should be priced $30 lower, the same as the Triumph, Glycerin and Nimbus.

For $180 you can even get a Hoka carbon fibre racer that can double up as a training shoe.

With the firmer Boost foam and the harder crystal rubber outsole, you don’t get the plush, step-in comfort that made previous Ultraboosts so comfortable.

I can’t really recommend the Ultraboost 21 to anyone unless you want a good-looking casual shoe to wear to the mall that you can do an occasional short run in.

The Ultraboost 21 is still very much a lifestyle sneaker and not a serious, performance running shoe.

We purchased a pair of Adidas Ultraboost 21 from runningwarehouse using our own money. This did not influence the outcome of this review, written after running more than 50 miles in them.

Visit ShopAdidas
This page contains affiliate links. As an Amazon Associate I earn from qualifying purchases.
WHERE TO BUY
LOWEST PRICE
$13
AVAILABLE ON SALE:Previous model $89