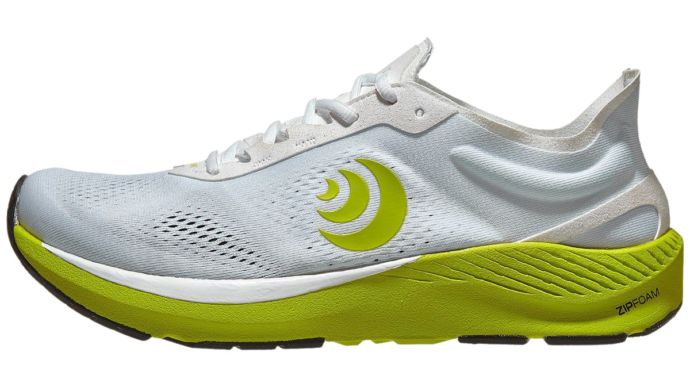 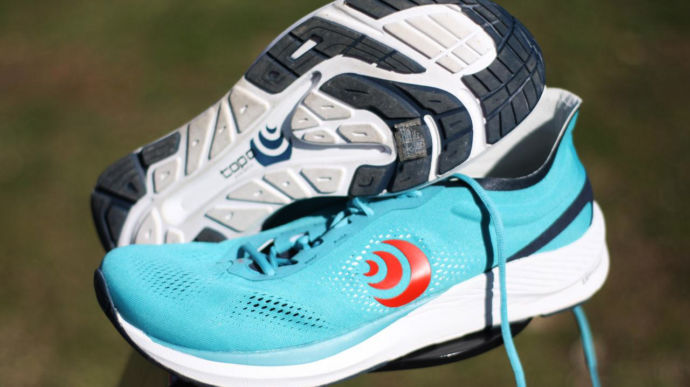 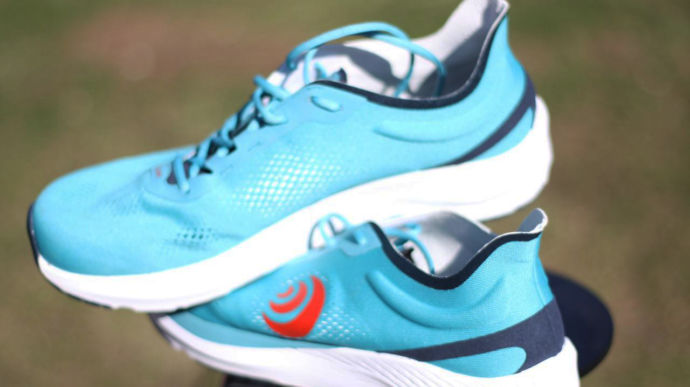 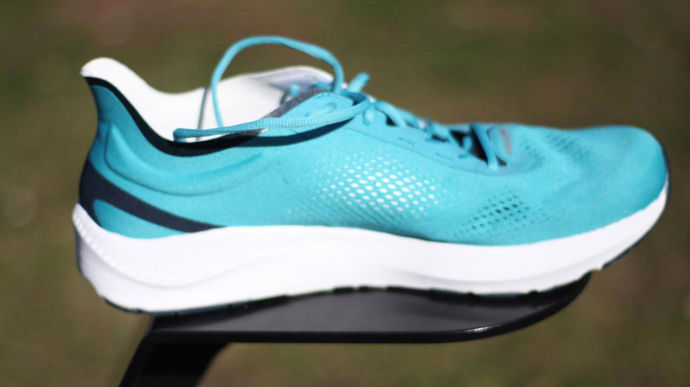 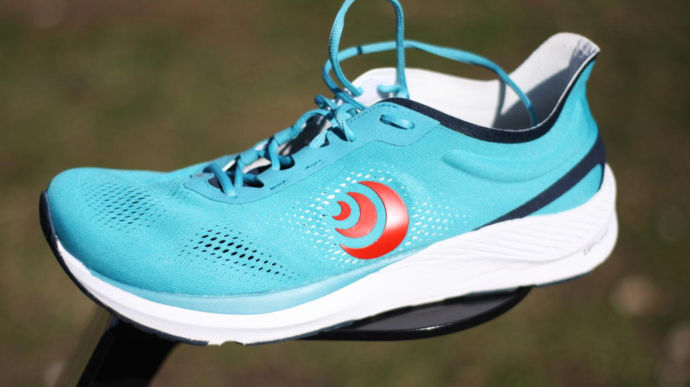 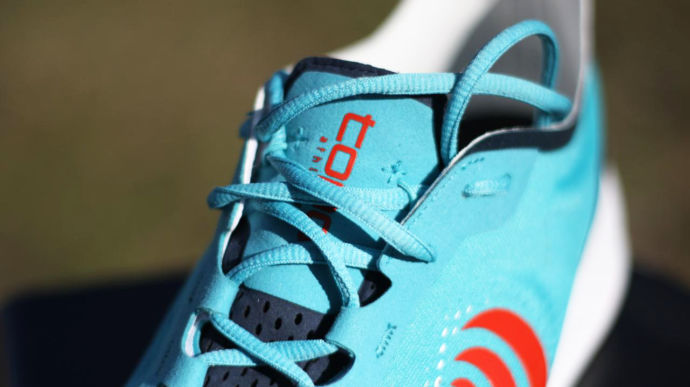 The Topo Athletic Cyclone is a responsive shoe that wants to zoom. However, it was too firm for me to feel comfortable on long runs.
WHERE TO BUY
LOWEST PRICE
$73
SHOE INFO
Topo Athletic
Brand
Cyclone
Model
Cushioning
Type
8 oz. (227 gr.)
Weight
120 US$
MSRP
5 mm
Heel Drop
WHO IS IT FOR
This shoe is made for lighter runners who are looking to run at higher paces. It's great for those looking to do tempo and speedwork.
Help me choose

The Topo Athletic Cyclone is a responsive, super light trainer offered by a smaller company trying to get into the market. There is a small, but very loyal, following for Topo.

This is due to their commitment to the “foot-shaped” design and low-drop options. Topo has been putting out options that are similar to Altra, but most have a low, but still there, heel-toe drop.

The Cyclone is Topo’s newest attempt to get into the performance shoe market, and has garnered a decent amount of publicity.

The Cyclone will compete against the Altra Rivera and loosely against the Brooks Ghost, Saucony Ride and New Balance 880. However, to me, it misses the mark of a shoe that will make my full rotation.

When the shoe arrived, I was very excited. I have been wanting to try Topo for a few years, and this was the first pair I have received for testing.

The cyan colorway is striking, and I enjoy looking at them. When I first put the shoes on, I thought they were quite comfortable through the midfoot and in the toebox, and I enjoyed wearing them for a full day.

On the first run, the midfoot kept my foot secure, and the upper was great. However, the cushion was incredibly firm.

After a 5-mile run, my knees and calves felt beat up. I hoped this would just mean the shoes needed breaking in, but that was somewhat concerning for me.

Topo has attempted to create a very simple and lightweight trainer that is meant for performance. The Cyclone uses a responsive cushioning called ZipFoam which they embedded in a rigid EVA frame.

This material is incredibly responsive and creates a very springy toe-off.

With 28mm of foam under the heel and 23mm under the toe, the 5mm drop is that of many aggressive offerings on the market.

Under the midsole is targeted blown rubber outsole for grip and to add durability on high-impact areas of under the shoe. This combo means there is plenty of protection, no matter the surface on which you run.

This combo of technology creates a sole unit that is designed to pick up the speed and stay comfortable. The responsiveness and bounce were easily noted while I was running in these.

The upper of the Cyclone is, in a word, simple. Topo didn’t want to waste any time, money, or weight on an upper that had more than it needed. This upper fits true-to-size in length, and has a comfy, wide toebox.

The midfoot stays tight and locks you foot in, and the heel is remarkably well-suited for locking your heel down. I say “remarkably” because the heel has almost no structure to it.

You can just push the heel all the way down and slip into the shoe if you want. But it doesn’t a great job of giving you a “locked-in” feeling.

The upper is made of a single layer of breathable mesh. This means it lets a lot of air in, and that can be either a good or bad thing.

The couple of runs I did when it was below freezing temperatures did not feel great, but when I ran in 86-degree weather it was great.

The laces caught in the eyelets frequently, and became frustrating. The lacing system is where one of my highlights of the shoe was present, as Topo added a lace lockdown loop on both sides of the tongue.

This feature is small, but I love when companies use it. This is the first one I’ve seen since the Brooks Ghost 11, and the first with it on both sides of the tongue since the Ghost 10.

This little loop does a great job of helping you lock-in and to keep the tongue in place.

The Topo Cyclone has a lot of nice features. There are many things that I think runners will enjoy. However, I just don’t think they hit the mark for me.

This super lightweight trainer (9.2 oz for my size 13) is very simple and is a great option to put on a pair and go.

The foot-shaped design is incredibly comfortable, and allows your toes to spread out and put you in a more natural running position in your feet.

The ZipFoam is incredibly responsive and has a great bounce.

But even with all of that, this shoe just fell flat for me. I have put more than 75 miles on these trying to see if they just need more time and miles. However, the promised “soft cushion” never showed up. This shoe is FIRM, very firm.

I took these out for runs of 8, 10, 12, and 13; each time my legs felt pounded at the end. My knees hurt for days after those longer runs, and my calves took a full week to fully recover. That’s not normal.

However, when I took them on a shorter tempo run – 5-7 miles – they were great. And they felt great underfoot when I picked up the pace.

They definitely have a place if you want to use them. However, I just don’t feel they are nearly as flexible as some other shoes out there.

This shoe is most closely in competition with the Altra Rivera. Having run in both of these shoes I feel very comfortable saying the Rivera is the superior shoe in almost every way.

Although the Rivera weighs a bit more than the Cyclone, it has softer cushion, just as much bounce, and the same foot-shaped design.

If I were to recommend a low-to-no drop, foot-shaped performance trainer, the Rivera would be the one I’d tell you to get.

The Cyclone is nice, but it’s just not very remarkable in most ways, and there just seems to be better offerings out there.

We purchased a pair of Topo Athletic Cyclone from runningwarehouse using our own money. This did not influence the outcome of this review, written after running more than 50 miles in them.

Visit ShopRunningWarehouse.Com
This page contains affiliate links. As an Amazon Associate I earn from qualifying purchases.
WHERE TO BUY
LOWEST PRICE
$73