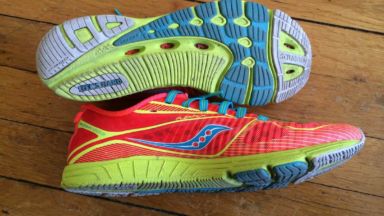 A durable, responsive racing flat with a 4mm drop that'll help you fly—and it looks good, too.
WHERE TO BUY
LOWEST PRICE
$100
SHOE INFO
Saucony
Brand
Type A6
Model
Racing
Type
5.1 oz. (145 gr.)
Weight
100 US$
MSRP
WHO IS IT FOR
Minimalist runners, people who want to go fast, short-distance racers
Help me choose

The Saucony Type A6 is a bit of a Holy Grail shoe for runners—so if you’re holding your breath to see what the A6 holds, you’re not alone. This iteration of the shoe does look like a big update from the outside—particularly, a beefier outsole has been added and the upper has gotten a makeover—but luckily, you can breathe easy.

The A6 doesn’t disappoint. This shoe is still an essential racing flat that’s dedicated to helping you be as fast as humanly possible, all while doing it with form that fits perfectly to the foot, provides breathability, and gives you traction. Oh, and I’ve never been complimented on the aesthetics of a shoe so much in my life. Saucony, you’ve done well.

This is how you want a racing flat to feel in-hand: light, sleek… and like you can’t wait to put it on. (The striking neon coral/citron colorway helps, too.) These run true to size, and though they’re on the narrower side as you’d expect from a racer, they’re flexible enough that they’re plenty comfortable regardless.

The toebox gives average room. Another nice addition is the padding on the ankle collar, which ensures you’ll be friction-free. An extra detail I loved were the flat laces; they kept these snug and made my run comfortable with no pressure on the top of my foot.

My first thought in these during my first run? These are fast. I felt like I was flying on a six-miler on city streets—my splits confirmed it. The A6 is insanely light on-foot and very responsive to dry streets.

It wasn’t the smoothest ride in the world, though I didn’t come out expecting it. I never felt like I had to break in the shoe, either; out of the box, I had the same experience underfoot that I had in subsequent outings, as well.

These feel better the faster you’re running in them. I’d recommend these for days you know you’re going out fast—and want to go even faster—instead of for your recovery runs.

Here’s where you’re going to notice an aesthetic difference from the Type A5; the sole looks a little chunkier. Saucony has included technology that keeps things light, despite the form factor being slightly different from the previous iteration. The sole feels very stable, but not at all rigid. (Subsequently, there they don’t offer a ton of protection from the pavement.)

The XT-900 carbon rubber outsole provided great traction on the city streets on which I ran, and was super-durable—and I think it’ll hold up pretty well with repeated abuse. They faired OK although slightly less well on wet pavement.

Another update from the A5 is that the upper is now all made of FlexFilm, a super-lightweight material which helps keep the flat as sleek as it is. It helps with water resistance, too. The tongue is made of Air Mesh, which is cushy, comfy, and breathable. They’ve also included elastic tabs on the tongue and the foxing to help you slide in and out, though I never found myself using them.

The shoe runs a tiny bit long in the front, and a few people around the web have been saying it’s slightly longer in silhouette than the A5, for what that’s worth. But all in all, I fell in love with the form factor of this shoe; I don’t think I’ve ever had a shoe completely conform to the contours to my foot the way the A6 did while still feeling breathable.

Overall, the Type A6 is a well-rounded racing flat for runners that want a fast, minimalist shoe for 5Ks to half-marathons (they may not provide enough protection from the pavement for a full marathon, but hey, if you’re a fast 26.2-er, you can make it work).

We thank the nice people at Saucony for sending us a pair of Type A6 to test. This did not influence the outcome of the review, written after running more than 50 miles in them.

Similar shoes to Saucony Type A6