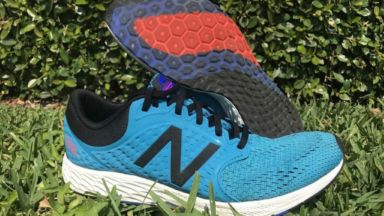 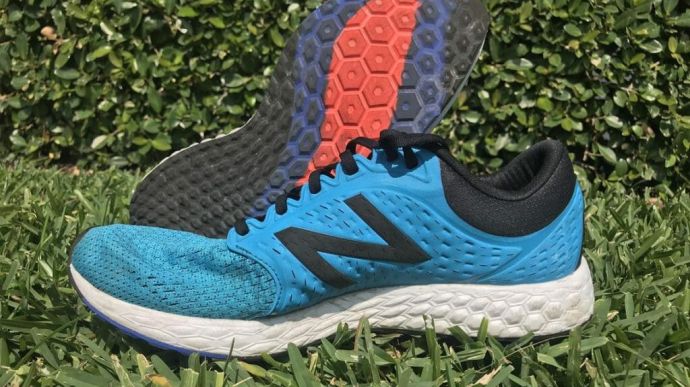 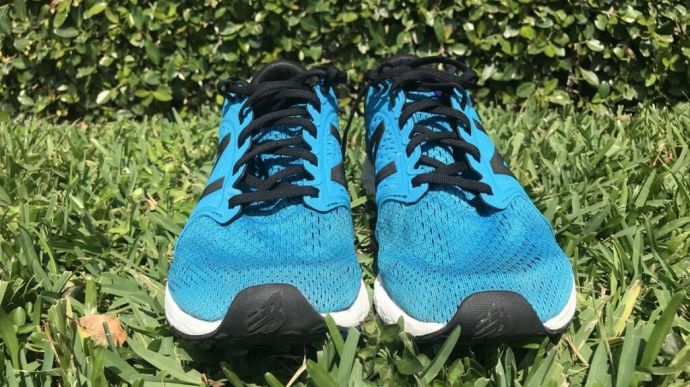 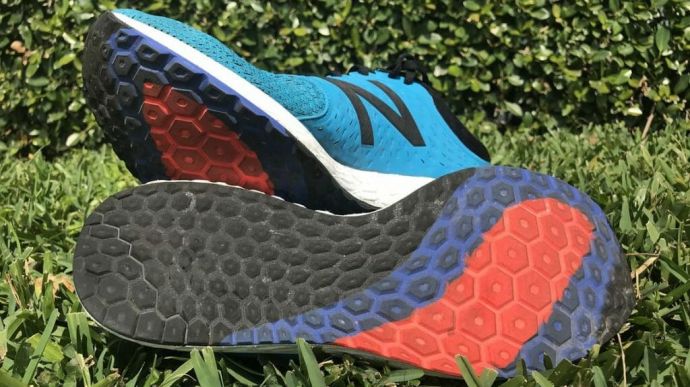 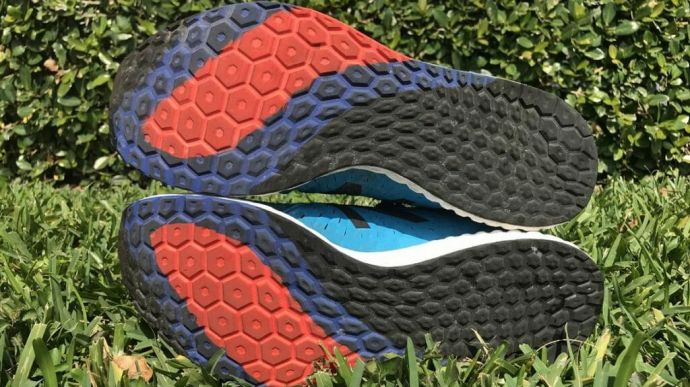 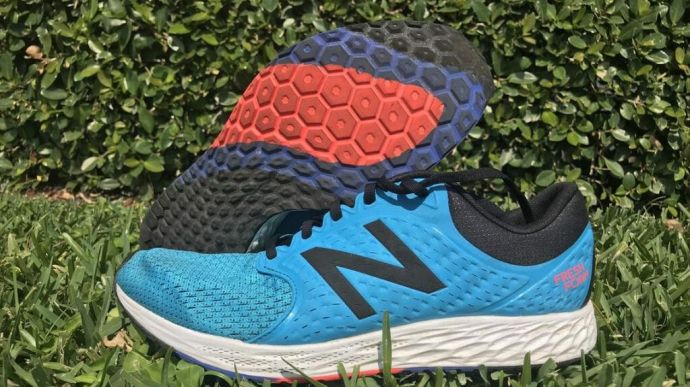 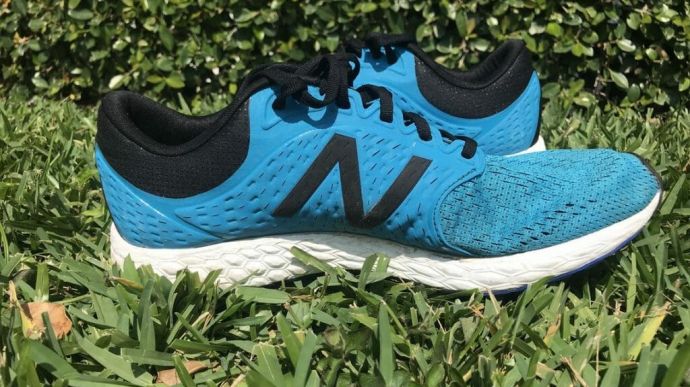 The New Balance Fresh Foam Zante v4 is a lightweight neutral trainer that strikes a balance between being a soft cushioned ride and a fast snappy responsive feeling.

It is such a versatile shoe that it can be used for racing 5Ks up to marathon distances for efficient runners.
WHERE TO BUY
LOWEST PRICE
$100
SHOE INFO
New Balance
Brand
Fresh Foam Zante v4
Model
Lightweight
Type
8.50 oz. (241 gr.)
Weight
100 US$
MSRP
6 mm
Heel Drop
Jan / 2018
Release Date
Fresh Foam Zante v3
Previous model
WHO IS IT FOR
The New Balance Fresh Foam Zante v4 can be a useful shoe for a wide range of neutral runners.

It can be an everyday; every run shoe for beginners up to being the go to shoe for race day for distances ranging from 5Ks up to marathons.
Help me choose

The New Balance Fresh Foam Zante, named after a beach in Greece, burst onto the running scene four years ago as a revelation. It was soft and cushioned, suitable for longer runs or easy recovery efforts.

However, it retained a snappy feeling, with excellent responsiveness. Paired with an aggressive toe spring; the Zante begged runners to push the pace.

It grew an immediate following due to its versatility and feeling. Four years later the Zante is still striking that balance with slight updates year after year.

Truth be told the difference to most runners will not even be noticeable between the 4 iterations of the Zante and thus, the review of the v4 will build on those from the v2 and v3.

Unboxing the Zante for the first time I noticed a few key aspects of the shoe. The Zante v4 has a similar hexagon pattern to previous versions on the sole, a tweaked upper, a very light weight feeling in hand, and a bright vibrant color.

Just as the Zante is versatile for its use, it sells in very bright loud colorways for runners who like flair, but also muted greys and blacks for those who prefer a less flashy appearance. The Zante looks like a clean simple running shoe.

New Balance has recently expanded their lineup to include the Fuelcore series and continued on their vazee and traditional cushioning lines.

The Zante is the lightest and least cushioned of the cushioning, or Adapt, running line. It stands out however by being one of the more versatile shoes on the market.

Testing of the Zante v4 took this shoe through long slow runs, recovery runs, treadmill, track training and a half marathon race. This shoe stood up to it all. Adaptability is key here.

The Fresh Foam Zante v4 sits on a single piece of Fresh Foam. It has a convex and concave hexagon pattern along the sides of the shoe.

The placement of these hexagons promote the sole of the shoe to compress in a specific pattern under the foot throughout the foot strike and push off.

It differs slightly from the v3 in the pattern provided which helps promote this slightly softer feeling. The biggest difference is in the lateral mid and forefoot region.

There are deeper perforations along the sole which makes this portion of the fresh foam compress easier and thus softer.

While the outsole has a distinct color pattern to it on the Zante v4, this is no indication of the actual rubber outsole. It is a single piece of rubber that is the same throughout the entire foot and very similar to the v3.

The pattern provides good but not great traction. It grips the road well in most rainy conditions but not while making sharp turns in suboptimal weather.

The upper of the Fresh Foam Zante v4 is a mesh upper in the forefoot and wraps the rest of the foot in a new sturdier material that New Balance calls Hyposkin. This Hyposkin helps secure the foot and promotes durability.

New Balance does offer 2E width on the Zante v4. The upper stretches out easily at the widest part of the foot where the Hyposkin transitions to the mesh material.

The original New Balance Fresh Foam Zante was akin to this magical, run forever amazing feeling. Literally every run I would want to reach for it. The v2 and v3 did add some firmness, and some more tightness.

The v4 brings back that magic. The softer yet snappy feeling in such a light feeling shoe is this perfect balance.
Balance is one of the best features of the Fresh Foam Zante as is the simplicity.

The Zante v4 is a perfect example of the keep it simple rule. It is just enough of everything and no more. You do not look at the Zante and see anything more than a plain looking shoe atop a single piece of foam sole.

It provides just enough soft cushioning for easy or longer runs. It provides snappiness at a lightweight meaning that the Zante performs well in races.

It provides a snug upper, specifically in the mid to forefoot that keeps the foot locked in well. The only caveat to what the Zante can provide you is that there is nothing to help the runner from a stability standpoint.

Because of this I would recommend the Zante to any neutral runner for all types of training, shorter distance road races, such as the 5K or even up to half-marathons, and to efficient runners, this shoe can be used for marathon distances.

If you only own one pair of running shoes at a time (we here at Running Shoes Guru do not recommend – Read Reviews!) then the Zante v4 would be an excellent choice for its ability to be a jack of all trades. It will however wear down quicker than most running shoes.

The Zante v4 adapts. It can checkoff any box for your running arsenal. The Zante v4’s versatility makes the shoe a personal favorite of mine and a must own trainer in my opinion.

We purchased a pair of New Balance Fresh Foam Zante v4 from runningwarehouse using our own money. This did not influence the outcome of this review, written after running more than 50 miles in them.