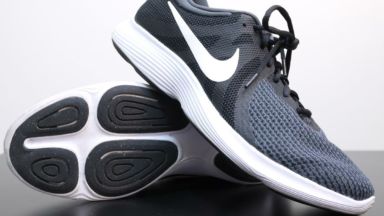 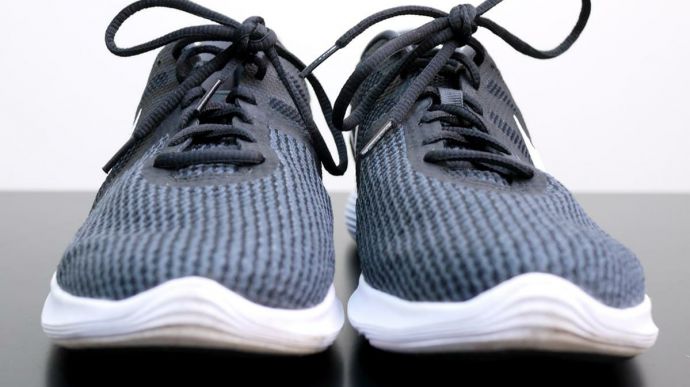 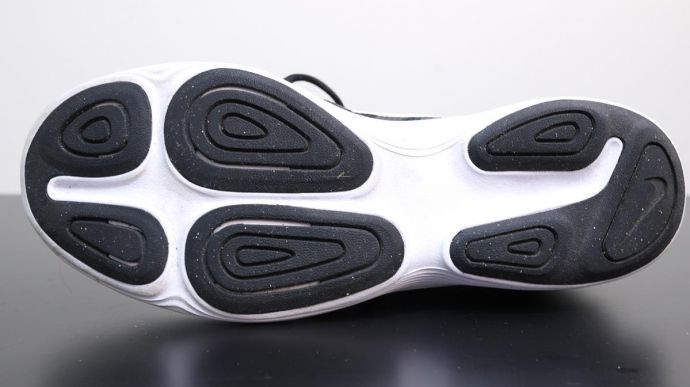 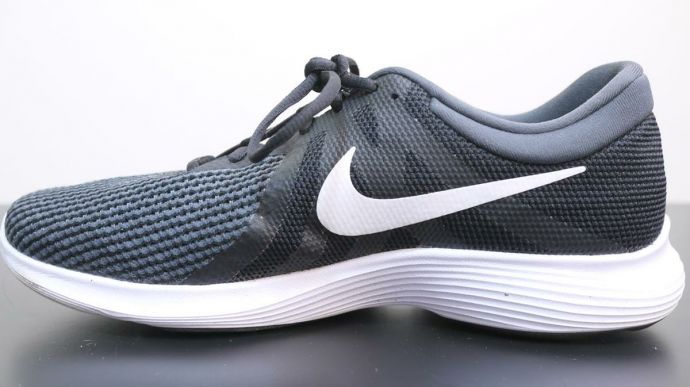 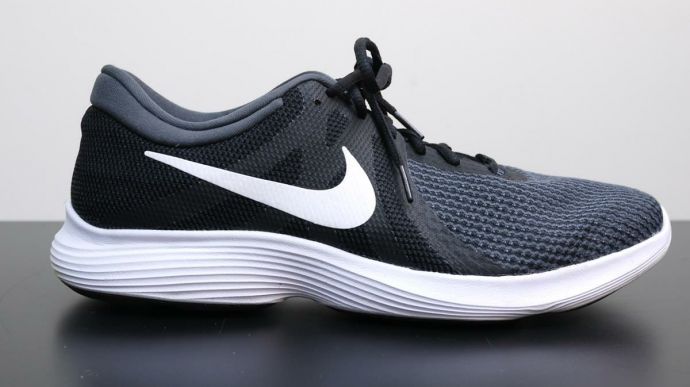 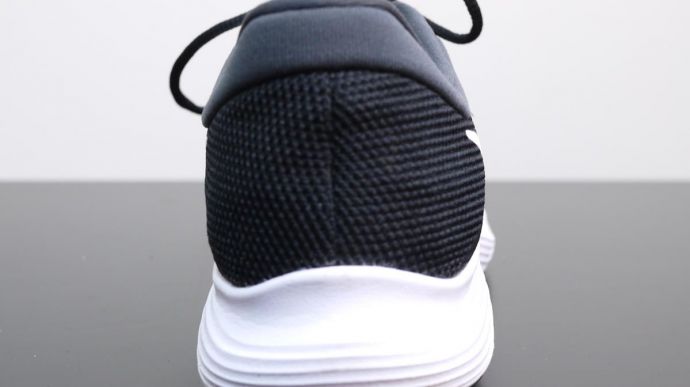 The Nike Men’s Revolution 4 shoe is an entry level running shoe with entry level components that come together in a modern looking package for price conscious athletes who want the Nike logo. Although it’s not the smoothest running experience, it gets the job done and looks the part.
WHERE TO BUY
LOWEST PRICE
$60
SHOE INFO
Nike
Brand
Revolution 4
Model
Cushioning
Type
12 oz. (340 gr.)
Weight
60 US$
MSRP
12 mm
Heel Drop
WHO IS IT FOR
The Nike Revolution 4 shoe is aimed at casual runners and gym-goers who don’t need to get into the triple digits when buying a shoe, yet still need something proven and will handle the occasional 5k while looking moderately stylish.
Help me choose

Since this is an entry level running shoe, there are not too many performance specifications out there, nor bleeding edge tech features that makes the shoe stand out from the crowd.

I did find the shoe has a weight of 10.4 ounces through one site (I am assuming in the standard size 9), which would put this shoe in the standard weight category of daily trainer.

The shoe has a 10mm drop, and is constructed with standard Nike tech (Phylon midsole, synthetic upper).

Similar shoes in this $50 price range that cater towards entry level runers and gym enthusiasts would be the Adidas X_PLR running shoes with a slightly higher price point and more aggressive tread pattern, and the Saucony Cohesion with an 8.2 oz weight and a 12 mm offset at a similar price.

Nike wants the entire shoe market. They want their shoes on the Olympic champions, the aspiring high school athlete, and the daily jogger.

As a result, Nike create shoes that go for $250+ and less than $50, and that’s where the Revolution 4 comes in. It’s about as low in price as I would go on a Nike shoe before I would be worried about quality issues (or for that matter, any shoe).

This is the shoe that comes up when you sort Nike’s running shoes in price by low to high, where the next price up would get you the Nike Air Zoom Winflo (which features Flywire, a sleeker upper, and a more standard outsole pattern).

The previous version of the Nike Revolution Shoe had a more grid-like outsole, an upper with additional stitching patterns, and a slightly different heel counter.

At first glance, it would be hard to tell which version is more modern, as both seem to share design elements across the shoe in different areas.

However, I think you would feel the difference when running in the Revolution 4 when compared to the Revolution 3 shoes base on the redesigned outsole.

My first time lacing up the Revolution 4s made it clear to me that Nike cared that these shoes didn’t just look good, they also felt good to run in. Not the case with all budget running shoes (I’m looking at you, Payless).

When I say good to run in, I’m noting that the shoe has nothing obviously wrong with it that would sacrifice your ability to comfortable run in the shoes.

Some features did stand out as less-than-ideal, but functional (such as the pronounced outsole layout, the weaker upper mesh, and the minimal heel counter design).

You’re getting an entry-level ride when running in these shoes. They’re the “sub-compact/budget” option when you rent a car.

It’ll work, you’ll forget about them after using them for a while, but you won’t be writing home about how great the experience was.

Nike’s Phylon foam is enough to give a durable run on the road/treadmill/track without bottoming out or prematurely wearing down.

It’s probably fine for even mid distance runners that want a cheap pair of shoes for quick runs, as I had no issues taking these shoes out on 5-12 mile runs. What did bug me after a while was the outsole design.

You’ll see it has contoured circles below the toe bed and heel. These stick out slightly from the base of the shoe and make little pressure points on your feet.

I assume they’re designed to be below the high pressure areas of your foot to help balance out pressure+add grip, but your foot slides around slightly in the shoe to the point where these bumps start pushing into your feet in unintended areas.

It’s not a deal-breaker, but is something you should be aware of if you’re very picky with how your landing feels.

In terms of outsole durability, I think these shoes will do great in the long run, possibly surpassing even higher priced shoes since Nike didn’t use softer rubbers and stuck with stiffer but more durable materials.

The hard rubber material for the outer does make the shoe a little noisy when running on concrete or asphalt though.

Since these shoes are situated as a budget choice, I’m sure runners will appreciate the added durability and won’t mind the marginally stiffer ride.

The layout of the rubber and mold of the foam is also pretty good at providing a comfortable heel to toe transition, with no noticeable restrictive movements.

Nike has done a great job at maintaining a sleek look across their entire lineup of running shoes, to the point where it’s hard to identify this shoe as one of their cheapest running models.

The front of the upper is a single layer, highly breathable mesh that wraps down into the toe of the sole without any obtuse stitching.

The mid and rear of the upper is a finer mesh with heat formed overlays for structure and style that are graced with a strong Nike logo. Lastly, the heel creates a neutral enclosure for your feet to fill.

In short, the shoe looks good. These shoes are a low-risk, easy choice for anyone that wants a neutral look at the gym. But the looks of the upper are slightly deceiving as you put miles into these shoes.

I found the heel is supported with an internal plastic or thin firm material that begins to crumple after a fraction of use when compared to more expensive models.

The shoe still works, but you’ll lose the ability to push your feet into the shoe without the heel collapsing after a while.

Similar story happens to the upper mesh at the front of the shoe. Since it’s thin and minimal with budget materials, you’ll see premature wear around the high stress areas like the edge of your big toe and/or pinkie toe.

Some owners of this shoe reported that the upper mesh starts to pop open after a few months of casual use without much running. Something to consider if you want this shoe to be a bit more than a casual daily trainer.

The tongue and lacing system are uneventful, where Nike put in simple mesh tongue that blends into the fit of the shoe when you tighten up the standard laces. No Flywire, no Flyknit, just regular laces looping through a reinforced mesh upper.

I’m happy I got a chance to review these entry level running shoes, as it shows that you can get by with some inexpensive trainers that can be 1/3rd the price of your average running shoe and get by without much of an issue.

I would still recommend that anyone who seriously wants to get into running to first try an older model of a more expensive shoe before going for these newer but cheap Nikes.

But would be ok recommending these entry level Nike shoes to anyone that just wants something on the market now that’s good for the gym and occasional runs.

We purchased a pair of Nike Revolution 4 from amazon using our own money. This did not influence the outcome of this review, written after running more than 50 miles in them.

Sorry - Product not found. Please try RunningWarehouse.Com to check in their assortment.
This page contains affiliate links. As an Amazon Associate I earn from qualifying purchases.
WHERE TO BUY
LOWEST PRICE
$60