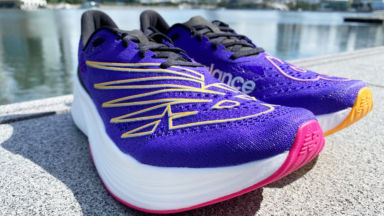 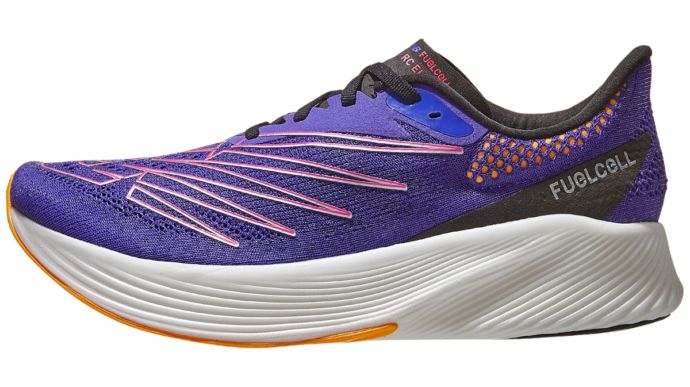 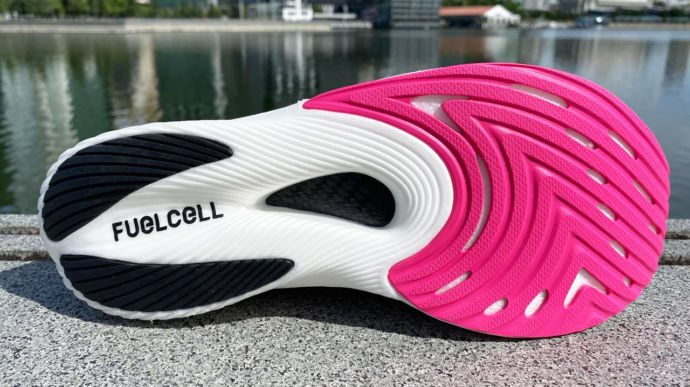 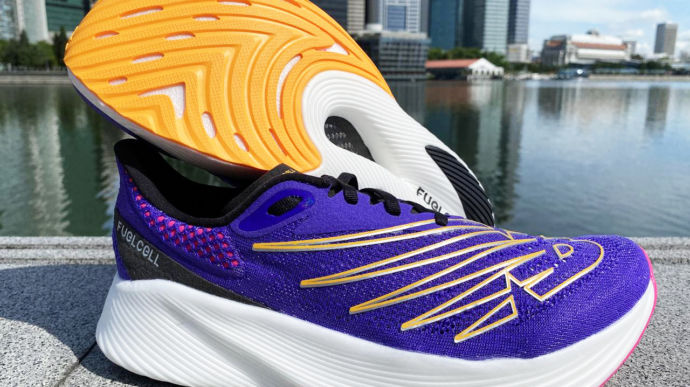 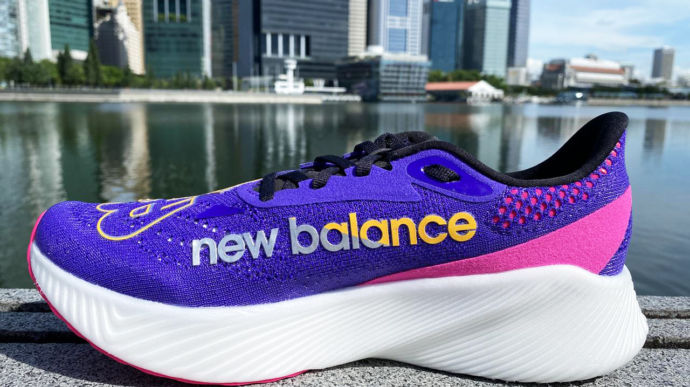 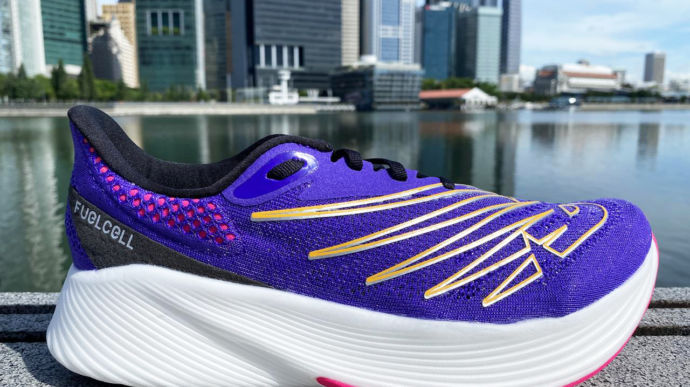 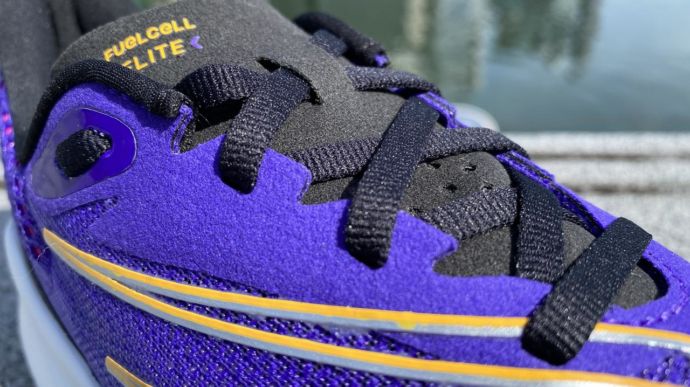 The New Balance FuelCell RC Elite v2 is an energetic, highly cushioned racer which is perfect for the marathon distance or beyond because it has long-distance comfort in spades.

Version 2 has a thicker midsole and flat forefoot outsole rubber which results in a softer ride which is smoother and an overall better shoe than version 1.
WHERE TO BUY
LOWEST PRICE
$225
SHOE INFO
New Balance
Brand
FuelCell RC Elite v2
Model
Racing
Type
7.7 oz. (218 gr.)
Weight
225 US$
MSRP
8 mm
Heel Drop
FuelCell RC Elite
Previous model
WHO IS IT FOR
If you're a runner who prefers a high level of cushioning over a prominent, propulsive carbon plate, the RC Elite v2 is the super shoe for you.

The RC Elite v2 has a similar ride to the Rebel v2 but with extra cushioning and a stiff plate to improve efficiency over long distances.
Help me choose

There were two things that set the RC Elite V1 apart from all the other carbon fibre super shoes: its super soft, squishy underfoot feel and its spiky Dynaride outsole.

It was hands down the softest of all the super shoes and it made very long distances feel like a stroll in the park.

The Dynaride outsole of the RC Elite made it easily the best gripping road shoe I’ve ever tested. It could effectively “bite” into a variety of surfaces, wet or dry to provide a traction like no other.

I thought that the RC Elite was a good racing shoe but its plate wasn’t prominent enough to provide the same high level of propulsion as a Vaporfly or Adios Pro.

Version 2 of the RC Elite has lost one of its defining features. Dynaride has now been replaced with a flat, blown rubber outsole.

The midsole stack height has also been increased significantly. It’s now 39mm in the heel, 31mm in the forefoot compared to 32mm/22mm in the first version so the drop has decreased from 10mm to 8mm.

The advantage of an increase in midsole stack height (apart from an increase in cushioning) is that it allows the carbon plate to have a more aggressive curve which is one way super shoes manage to get their propulsive pop on toe-off.

So can the new, revamped New Balance flagship racer now compete with the fastest super shoes in the game and how does it compare to the excellent first version?

The first time I saw the RC Elite v2 in leaked images, I had to take a couple minutes to admire and appreciate it. It was the most beautiful running shoe I had ever seen.

When I saw it in person in the store, it looked even better. It’s one of those shoes that turns heads when people see you wearing them on the street and in the sun, it sparkles and comes alive.

When I tried it on, I could immediately feel the increase in cushioning. It felt a lot plusher and squishier underfoot.

My first run was a 17 kilometre fartlek. On that first run, the RC Elite v2 reminded me of another New Balance carbon fibre shoe that has a very similar ride: the FuelCell TC.

The RC Elite v2 feels a tad softer and more stable than the TC though. Stability is the one thing that was lacking in the FuelCell TC.

The most striking thing was how much smoother the RC Elite v2 felt than the first version.

The Dynaride outsole on the first version made the forefoot feel bumpy because of the small spikes but with the smooth sheet of blown rubber, transitions felt much better.

The RC Elite V1 was the softest, most cushioned super shoe and now with the added midsole stack height, no other super shoe even comes close.

The ride of the RC Elite v2 feels like you’re gliding over the road. It’s the softest super shoe by far because of its low density, highly compressible FuelCell midsole which is a supercritical TPU/EVA blend and is exactly the same formulation as version 1.

I really enjoyed it on long-distance runs because you get the sense of bottomless cushioning without the feeling that you’re sinking down into the foam too much.

What sets the RC Elite v2 apart is that even at slow speeds above 5.30 per kilometre, it feels stable, cushioned and bouncy. This makes it one of the most versatile super shoes.

The one negative aspect of the midsole foam being so soft is that it waters down the level of propulsion that you get from the carbon plate.

The other difference in the midsole geometry is that the RC Elite v2 has a higher toe-spring which increases the rocker effect and makes the shoe feel more efficient during long runs.

The RC Elite v2 can handle most types of runs with bouncy effortlessness, except for interval speed sessions where I feel that the FuelCell is a little bit too squishy and it gets in the way when you’re trying to go all out.

Any race further than a half marathon is where the RC Elite v2 really shines because on those longer distances, you can feel the energy-saving properties of the foam and the forefoot rocker.

I really liked the unique, spiky Dynaride on the forefoot of the outsole but I don’t miss it on the RC Elite v2. I found the level of traction to be slightly lower but I prefer the smoother ride transitions of version 2. The smoother ride makes it feel more silky and far more enjoyable over long distances.

The rubber on the rearfoot has also changed to a “Vaporfly” like design of 2 vertical strips.

My favourite update is the large window situated directly under the midfoot that saves weight and allows you to see the carbon plate. It reminds of a supercar where you can see into its engine.

Severe overpronators still need to avoid the RC Elite v2 because the exaggerated lateral side of the midsole flares out and it pushes your foot inwards.

The fit of the RC Elite v2 is not your typical snug racing fit: it’s accommodating and roomy in the forefoot. It fits more like a training shoe than a racing shoe which makes it a lot more comfortable over long distances.

The RC Elite v2 should be fine for a variety of different foot shapes, including runners with very wide feet.

The mesh has been changed to a stretchy knitted material which is smoother and not as furry as the RC Elite V1’s material. This results in better breathability because it is thinner and there are now big holes on the top of the toe-box to let in more air.

The knitted material is also thinner than most knitted uppers so it doesn’t absorb as much liquid and it won’t increase the weight of the shoe during races.

The tongue of the RC Elite v2 is a little longer than the first version’s tongue. It’s still flat, wide and not gusseted so I did experience a little downward tongue slide during runs.

The collar and heel tab are lightly padded and I experienced excellent foot lockdown with no heel slippage although I did have to use a runner’s knot.

The fit is true to size with the length being a little shorter than the average running shoe. I thought about going up a half size but I’m glad I didn’t because the forefoot would have been too roomy.

Overall, the upper performed well even on runs longer than 4 hours. I experienced no blisters, awkward rubbing or uncomfortable pressure anywhere on my feet and the only irritation was that I had to pull the tongue back up during resting periods.

It may not be the fastest carbon fibre racing shoe, or the lightest but there’s something really likeable about the RC Elite v2.

It might be the bold colourway or it might be the fun, bouncy ride but there’s something about it that makes me want to run in it more often than any other super shoe.

The RC Elite v2 is a lot more forgiving than other carbon fibre shoes and its ride is less jarring so I don’t mind training in it.

I also don’t experience any calf stiffness after doing long runs in it because it has a more natural ride than other super shoes.

It’s probably not my first choice to race a marathon in because the ride feels a little bit too “relaxed”. For a marathon I’m looking for something that can help me put the pedal to the metal.

Version 2 is a big improvement over the RC Elite V1. It’s more cushioned because of its thicker midsole, smoother because of its flat forefoot outsole rubber, and more efficient over long distances because of its higher toe-spring.

They say that you shouldn’t judge a book by its cover. The RC Elite v2 proves that sometimes you can because its ride is as fun and exciting as it looks.

We purchased a pair of New Balance FuelCell RC Elite v2 from runningwarehouse using our own money. This did not influence the outcome of this review, written after running more than 50 miles in them.

Leave a Reply to Tracy Self Cancel reply