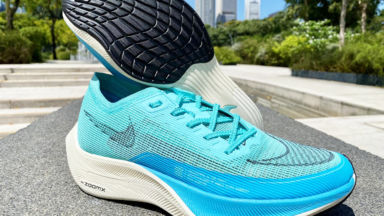 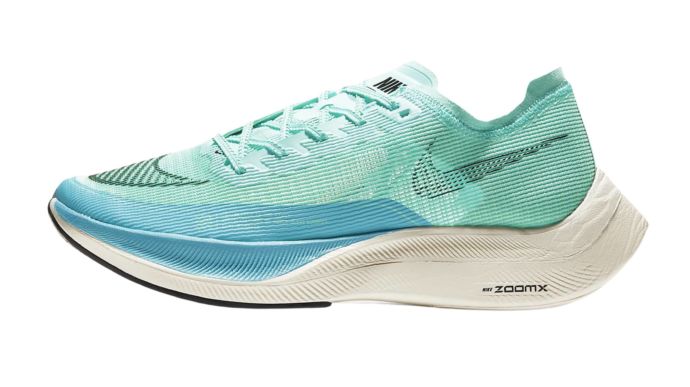 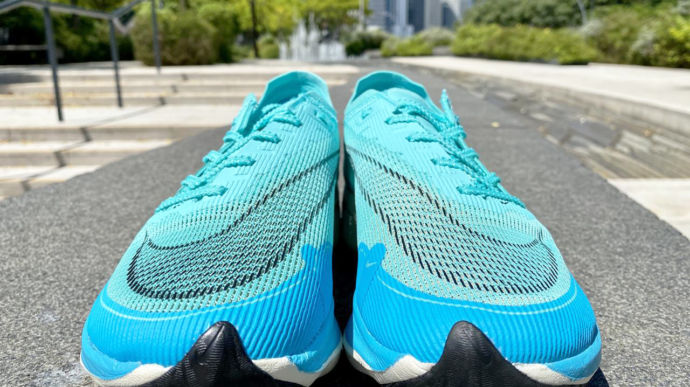 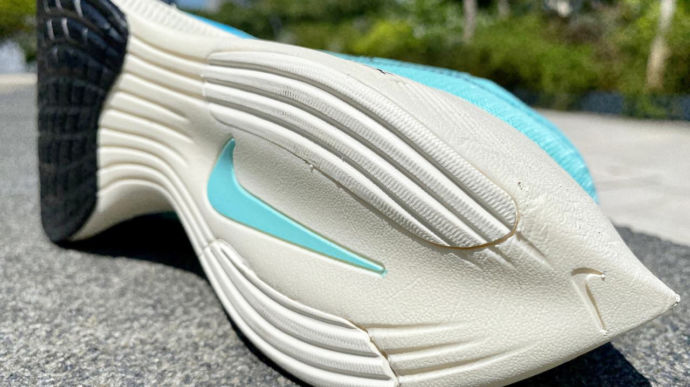 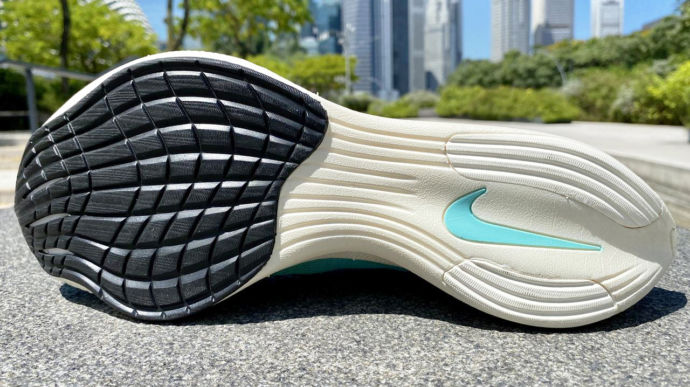 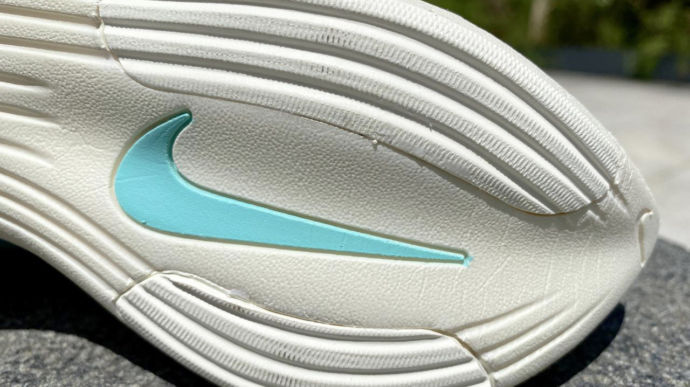 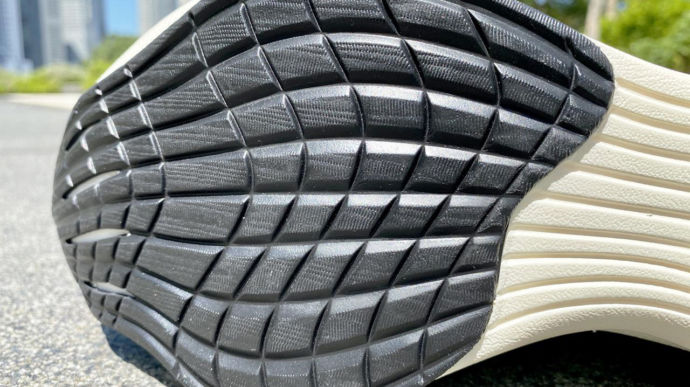 The Nike ZoomX Vaporfly Next% 2 is still a superlight racing powerhouse with excellent cushioning and propulsion. What makes it so special is its unique forefoot geometry that provides a forward-tipping sensation during each toe-off.

This version is an upper-only update that improves the fit and comfort of the shoe.
WHERE TO BUY
LOWEST PRICE
$249
SHOE INFO
Nike
Brand
ZoomX Vaporfly Next% 2
Model
Racing
Type
6.6 oz. (187 gr.)
Weight
250 US$
MSRP
8 mm
Heel Drop
WHO IS IT FOR
If you're a runner with good form, looking for a super shoe that's best suited to fast paces, the Vaporfly Next% 2 is the shoe for you.

It shines on tempo, threshold and interval workouts but doesn't do easy paces very well because of its narrow rearfoot.
Help me choose

This is the shoe series that started it all. The Vaporfly 4% was the first of its kind, the pioneer, the very first super shoe. Before the Vaporfly, elite runners were doing full marathons in pancake-thin racing flats.

What made the Vaporfly so special were two things that competitors couldn’t copy: ZoomX foam and the shape of the carbon plate.

The Vaporfly Next% 2 is the third iteration of the Vaporfly series and it is only a minor update.

This was a bold move by Nike, considering that the Vaporfly Next% 2 has been two years in the making and competitors are hot on their heels with their own innovations in racing super shoes.

The Vaporfly Next% 2 is just an upper update. It weighs just 6.6 oz (187g) which still makes it one of the lightest carbon fibre racing shoes you can buy.

Outside of the US, it also costs less than the previous version. In Singapore, the price dropped by 38 USD.

In this day and age, it’s extremely rare for a brand to drop the price of a new version of an existing shoe and this is proof that Nike knows that their lead in marathon racers has been cut.

So has Nike done enough to keep the Vaporfly the default choice for fast marathon runners and is the updated Next% 2 better than its predecessor?

Vaporfly Next% 2 – Closeup Lateral Side

There wasn’t a ton of excitement for the Vaporfly Next% 2 when pictures of it first surfaced online- not like the previous version which was a complete overhaul.

When I put the Vaporfly Next% 2 on for the first time, I took an immediate liking to the new mesh upper.

It conformed to my feet better and I liked the extra flexibility of the new material- it reminded me of a softer version of Atomknit on the Alphafly.

The midsole and outsole felt exactly the same as the previous version and the prominent arch sensation was still there due to the narrow midfoot of the Vaporfly.

My first run was a long interval speed session. I hadn’t worn the Vaporfly Next% in a really long time and since then, I’ve tested a lot of super shoes.

In the first couple of steps, I was reminded of how soft and cushioned the forefoot of the Vaporfly is. It’s definitely one of the softest carbon fibre shoes.

I was also reminded of how disjointed ride transitions feel in the Vaporfly because of how slim the midfoot is- it feels like you’re transitioning from the rearfoot straight on to the forefoot.

The signature rigid, snappy-feeling from the carbon plate was also still present in this new update and the shoe didn’t disappoint on that first run.

Vaporfly Next% 2 – Lateral Side

If it isn’t broken, don’t fix it. The midsole and outsole are exactly the same as the previous version.

The Vaporfly Next% is the most popular carbon fibre racing shoe by a long stretch so Nike decided to not meddle with it.

Not only is it one of the lightest super shoes but it’s also one of the most cushioned and propulsive which is an unbeatable combination.

It’s been two years since the original Next% was launched and the sole unit still holds up to the competition. That’s how ahead of its time the Vaporfly Next% was.

The Vaporfly Next% 2’s midsole stack height is 40mm in the heel, the maximum allowed by World Athletics so you get a ton of cushioning and very little ground feel.

The 100% ZoomX midsole of the Vaporfly Next% 2 has more than enough cushioning for marathon distances and after long runs of 30+ kilometres, my legs feel noticeably less fatigued than in other shoes with other midsole foams.

What makes the Vaporfly such a lethal weapon is its full-length carbon plate which provides the spring-loaded kick.

Most of the responsiveness comes from the heel of the shoe. The ZoomX foam is so soft that when you load the heel, the carbon plate flexes downwards and then shoots your foot forward like a swimming pool springboard.

The Vaporfly Next% 2 has a unique design in that its forefoot is angled upwards but the high toe-spring isn’t rounded so it doesn’t work as a rocker like in other super shoes.

It feels like you’re stepping off of the edge of a step, creating a forward tipping sensation.

I find the Vaporfly Next% 2 unstable when heel striking because of how high my foot sits off the ground so I have to make a conscious effort to forefoot strike.

It’s the narrow midfoot and rearfoot that makes the Vaporfly Next% 2 not very versatile.

It’s great for tempo, threshold and speedwork sessions but it doesn’t handle easy runs or even steady runs very well because it isn’t suitable for heel striking- it’s too unstable.

On the outsole, there’s plenty of hard-wearing, thick rubber on the forefoot which is very durable. I like how thick this rubber is because I don’t have to save the shoe for race days only.

On the rear, there are two strips of rubber placed vertically which are recessed into the midsole of the Vaporfly.

I find the outsole traction of the Vaporfly Next% 2 below average because of how hard the rubber is but I also find the durability above average.

The sections of the midsole that aren’t covered with rubber tend to scuff over time but they aren’t high wear areas so it’s not a big concern.

The new mesh upper is a vast improvement over Vaporweave on the previous version and breathability is amazing. It’s the best Vaporfly upper to date.

The fit is better and it gives the Vaporfly a more premium feel because Vaporweave had a cheap, plastic quality to it. The material also no longer bunches up when you tighten the laces.

The tongue of the Vaporfly Next% 2 is slightly more padded than the tongue on the previous version which makes the lacing area more comfortable on the top of my foot.

Like most of the racing shoes I’ve tested recently, I find the tongue too short because during runs, it slides downwards. When it slides down, the top row of laces rests directly on my foot and I can feel the lacing pressure.

There is foam padding on the inside of the heel cup and this padding keeps my heel locked in place. Foot lockdown is great but I had to do heel lock lacing to achieve this.

They’ve added rubber-like reinforcements on the lateral and medial sides of the toe box for extra structure and durability around the toe box so the shoe feels very durable.

There are also new laces on the Vaporfly Next% 2 which are very similar to the ones on the Alphafly. They have perforations on the sides of them which grip into the eyelets and improve the lockdown.

It still fits true to size and there is plenty of room in the toe box for my toes to splay; however, due to the narrow midfoot, the Vaporfly Next% 2 is still not suitable for wide-footed runners and there is no wide version.

Outside of the US, the biggest differentiator between this version and the previous version is the price. A price drop for a shoe that is already a bestseller and so limited in quantities is a very bold move by Nike.

I really enjoyed using the Vaporfly Next% 2 for tempo, threshold and interval workouts because of how much cushioning the thick slab of ZoomX offers and the geometry of the carbon plate which launches you forward.

What limits the Vaporfly Next% 2 is how narrow its midfoot and rearfoot are. Not only is it best suited to forefoot strikers with good running form, but it doesn’t handle easy paces very well.

Compared to the competitors, I don’t feel like the Vaporfly Next% 2 is as energy saving as the Adios Pro or the Metaspeed Sky. Both of those shoes have rockers which feel more efficient over long distances.

The Metaspeed Sky also has a more prominent carbon plate with a faster feel and a wider, more stable base so the Vaporfly wouldn’t be my first choice for a long race like a marathon.

For me, the Vaporfly Next% 2 is a 5km to half marathon shoe because during the later stages of long distances, my form deteriorates and I can feel the instability when I’m landing further back on my feet.

Compared to the $275 Alphafly Next%, the Vaporfly Next% 2 is much lighter and represents better value so I think that it will fly off the shelves once it’s more widely available.

There’s no doubt that the competition has caught up but Nike has done just enough this time round to make the Vaporfly Next% 2 a very compelling argument for purchase.

I have a feeling that the Vaporfly Next% 2 will still be the default super shoe choice for fast runners.

We purchased a pair of Nike ZoomX Vaporfly Next% 2 from runningwarehouse using our own money. This did not influence the outcome of this review, written after running more than 50 miles in them.

Visit ShopRunningWarehouse.Com
This page contains affiliate links. As an Amazon Associate I earn from qualifying purchases.
WHERE TO BUY
LOWEST PRICE
$249