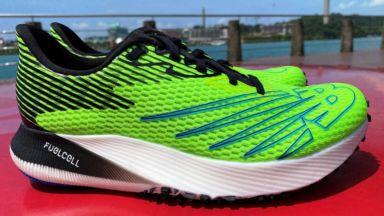 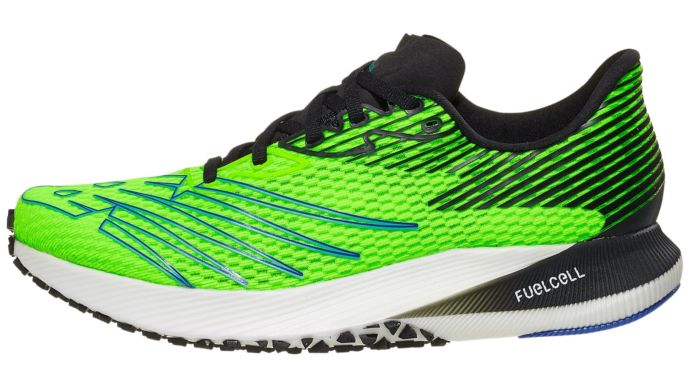 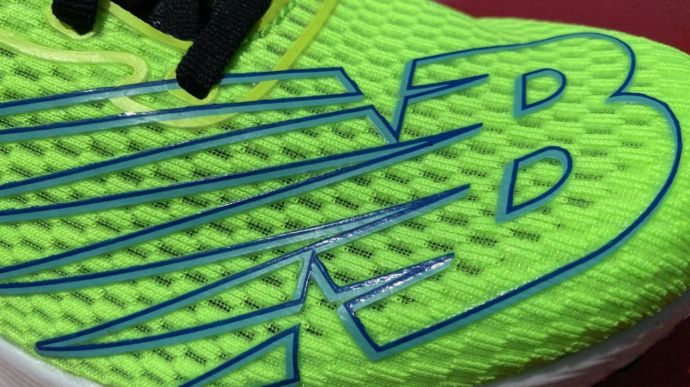 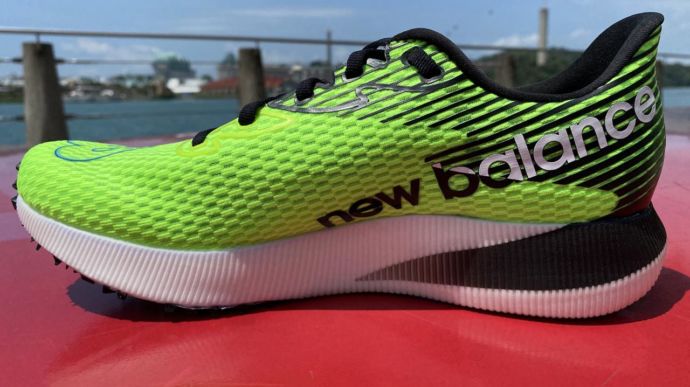 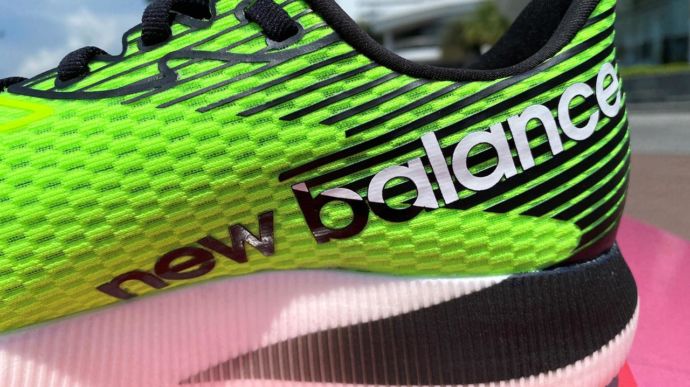 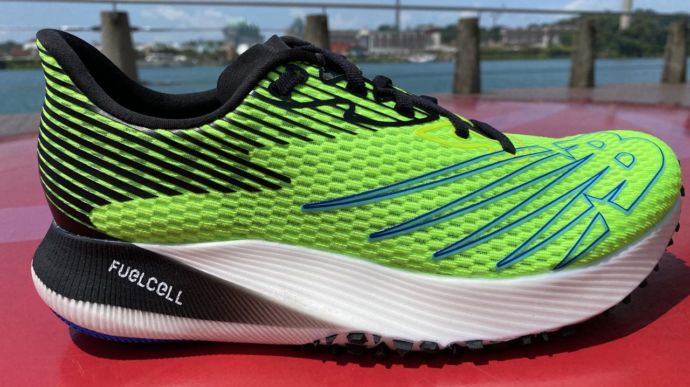 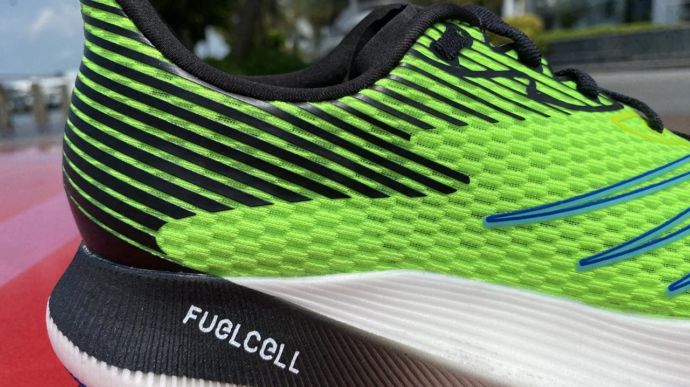 The New Balance FuelCell RC Elite is a highly cushioned racer which excels at the marathon distance.

Its ultra-low density FuelCell midsole combined with its carbon plate result in an efficient ride which is much faster than it feels.
WHERE TO BUY
LOWEST PRICE
$229
SHOE INFO
New Balance
Brand
FuelCell RC Elite
Model
Racing
Type
7.3 oz. (207 gr.)
Weight
225 US$
MSRP
10 mm
Heel Drop
WHO IS IT FOR
If you're a runner with relatively good form, looking for a fast marathon racing shoe which won't beat up your feet, the FuelCell RC Elite is an excellent choice.
Help me choose

Whatever it is, the FuelCell RC Elite ticks all the boxes and is New Balance’s premium, flagship marathon racing shoe.

The RC Elite is part of a set. The cheaper, training companion the TC was launched much earlier in the year.

The RC Elite has a lot to live up to with the TC being one of my highest rated shoes of 2020. It was a unique carbon-plated experience and just a fun shoe to run in.

So what’s the difference between the RC Elite and the TC? The RC weighs 2 oz less and has 2mm less foam in its heel and forefoot.

The RC also costs $25 more than the TC which isn’t that much compared to the price differences between other racing shoes and their training companions.

At 7.3 oz for a men’s standard size, the RC is a very light shoe, even for its category.

Compared to the competitors, the RC is lighter than the Endorphin Pro, Alphafly, Adizero Pro and Adios Pro. New Balance says that to be truly competitive, a marathon racer has to be around 7 oz.

When I first took the FuelCell RC Elites out the box and saw the lime green upper, they immediately reminded me of the Vaporfly Next%.

It’s a pity that New Balance didn’t choose their own signature, iconic colourway for the men’s FuelCell RC Elite like a luminous yellow or a cobalt blue.

The Vaporfly Next%’s signature colour is lime green green, the Alphafly’s is green and black, the Metaracer’s is orange and the Endorphin Pro’s is the white/turquoise mutant colourway.

The women’s launch colourway is purple/lavender which is even more exciting than the men’s version.

New Balance says that the FuelCell in the RC is the lowest density of FuelCell they have made while also having the most energy return.

When lacing them up for the first time, I had to do a lot of adjusting. I felt a lot of pressure on the top of my feet at the base of my ankles as a result of the tongue being so thin and short.

What I did was I used heel lock lacing but I skipped out the second last hole and used the last and third last holes. This way, the laces could be tied lower down and this method eliminated the uncomfortable pressure.

My first run in them felt very familiar: they felt like a lower profile, softer FuelCell TC. I was surprised at how soft they felt underfoot because normally, racing shoes are firmer and more snappy-feeling.

The thinner midsole and less rubber on the forefoot resulted in a higher level of ground feel than the TC.

The RC Elite is like a magic shoe. While they don’t “feel” like anything special during runs, the magic happens whenever I look at my average speed after a run and I can’t believe my pace.

It’s always 10-15 seconds faster than I thought it would be, after every run in them.

A lot of the magic comes from the high efficiency of the shoe. While being very cushioned, the combination of the soft foam and the carbon plate work together seamlessly to create a pleasant ride that isn’t jarring.

The RC Elite glides along the road.

While many carbon-plated racers were designed for the full marathon distance, very few of them actually offer enough cushioning and protection for 42.2 kilometres.

The FuelCell RC Elite is one of them that does exactly what it is intended to do. It handles marathon distances with ease. For me, the RC Elite is so soft that any race shorter than a full marathon is not in its wheelhouse.

I think that many elite runners will feel that the RC Elite is even too soft for marathons and doesn’t have a firm enough toe-off for record setting runs.

It was only 5 years ago that elites were using racing flats for marathons with minimal cushioning.

I use my RC Elites for long runs over 20 kilometres at marathon pace. For anything shorter at faster paces I feel like the midsole is too soft and gets in the way.

I found them to be less versatile than the Alphafly but they possess a lot more long-distance comfort.

A great feature of the RC Elite is that after runs in them, my legs never feel sore or stiff. It’s a really forgiving shoe which is softer than most daily trainers and even some max-cushioned trainers.

The carbon plate inside the RC Elite is full-length and the same shape as the one inside the TC but it is lighter.

It’s not as stiff as the plate in the Vaporfly/Alphafly and it has some flexibility but it still helps keep the shoe rigid and snappy.

The midsole of the RC Elite flares out on the lateral side to create a “wing”.

The midfoot and rearfoot are slightly narrower than the TC to save some weight and the result is that the RC Elite is less stable than the TC and on the lower side of the carbon-plated stability spectrum.

I am a slight over pronator and I didn’t experience any discomfort during runs because of the lack of stability but I did have to concentrate on my form and focus on striking more on the forefoot where it is wider and more stable.

I can imagine that the RC Elite could be troublesome for heavy over pronators due to the lateral wing prominence and the absence of a medial one.

Ride transitions in the RC Elite are relatively smooth. The single-density midsole feels velvety smooth but then the Dynaride lugs on the forefoot outsole area feel like tiny rubberised protruding thorns.

The outsole is the best gripping outsole I’ve ever experienced and a lot of it has to do with the Dynaride forefoot.

It consists of tiny rubber triangles packed closely together. These triangles “bite” into the ground like teeth. There are also two long rubber strips covering the rearfoot high wear areas.

I ran in the rain numerous times and I never ever felt like I was going to slip.

The great thing about the outsole of the RC Elite is that the midsole is so soft that when you strike your foot, the lugs recede slightly into the midsole so they don’t bear the full force of the foot strike.

This increases outsole durability so the small triangle nubs on the forefoot show very little wear even after 50 miles of running.

The Durability of the RC Elite is higher than the average marathon racer. New Balance says that it can handle two marathon training cycles and it feels a lot more sturdy and well-made than other racing shoes.

The midsole is a blend of TPU and EVA so it won’t lose as much cushioning over time compared to regular EVA midsoles. This is a shoe that I don’t mind saving for races only.

Being the racer in the set, you’d expect the RC Elite’s upper to be thinner and more minimal but it actually feels thicker and more durable than the TC.

The fit is a lot more snug though, like a true racing shoe. It’s true to size but you may find the fit uncomfortable if you have wide feet.

The RC Elite fit my narrow feet perfectly and gave me no chaffing or blisters. I would gladly wear them for runs that last over 3 hours.

Gone are the thick matte black overlays and some of the padding. New Balance wanted the RC to be as light as possible so they used printed overlays for branding and decoration.

There is an internal heel counter which isn’t intrusive and locked down my heel really well.

My least favourite thing about the upper is the tongue. It’s not gusseted so it slides downwards during runs and then you can feel the lacing pressure from the first couple of rows but it’s in no way a deal breaker.

Apart from the tongue slide, the upper is comfortable, breathable and has great foot lockdown provided you use heel lock lacing.

The FuelCell RC Elite is definitely deserving of the title “super shoe” and is for runners who want the carbon plate experience but who also want a highly cushioned ride.

It’s ironic that it has “Elite” in its name when it is such a democratic shoe because its high level of cushioning makes it suitable for non-elites.

The RC is a unique marathon shoe that has plenty of long distance comfort. It doesn’t have an intrusive carbon plate but also doesn’t sacrifice efficiency.

New Balance has created a really special racing shoe that is deceptively fast. There is no way that a shoe with this much cushioning should be this fast. It’s magical.

There isn’t a massive difference in price between the TC and on the RC but what you get is a lighter shoe with a lower midsole stack height and a softer ride with more responsiveness.

The highlight of the shoe for me is the outsole which grips better than anything I’ve ever run in. This would be my first shoe choice for running in the rain.

We purchased a pair of New Balance FuelCell RC Elite from runningwarehouse using our own money. This did not influence the outcome of this review, written after running more than 50 miles in them.

Visit ShopNewBalance
This page contains affiliate links. As an Amazon Associate I earn from qualifying purchases.
WHERE TO BUY
LOWEST PRICE
$229