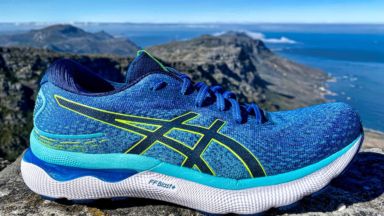 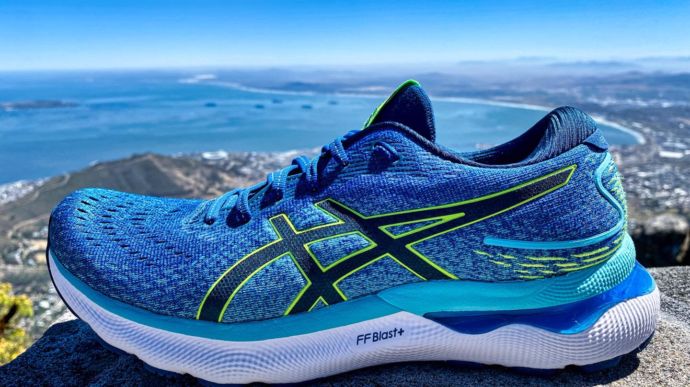 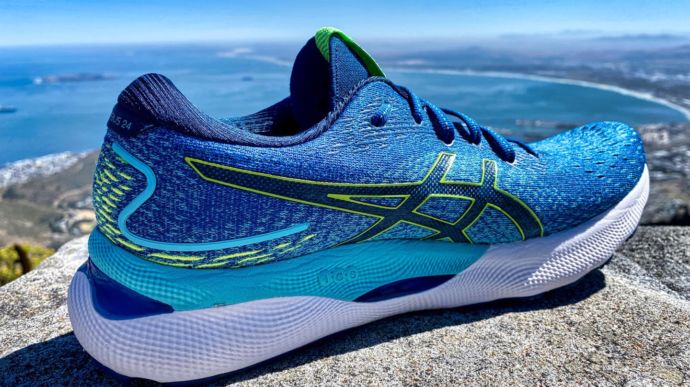 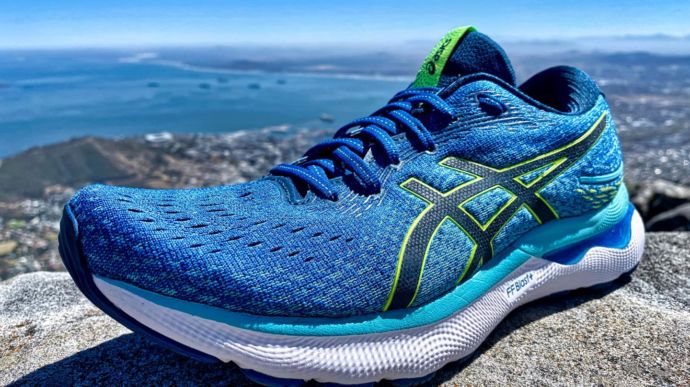 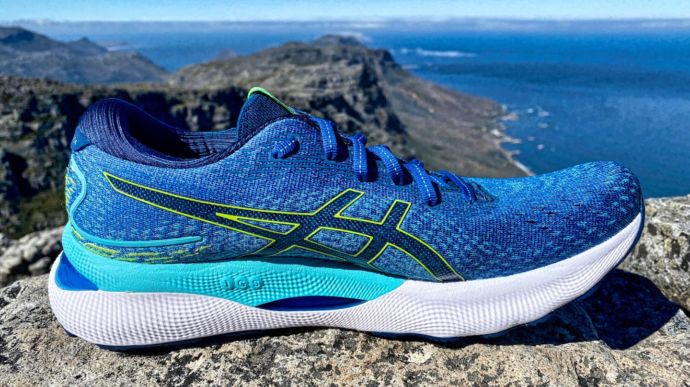 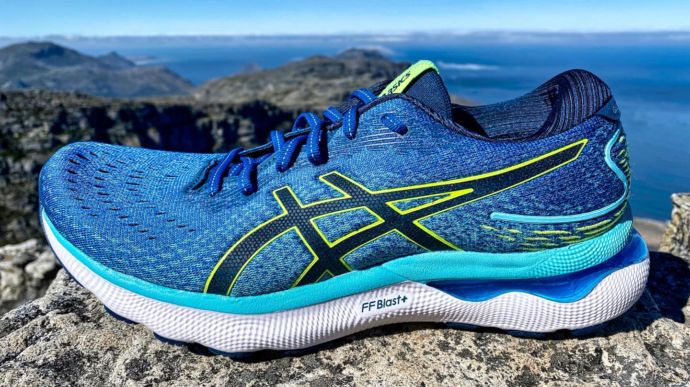 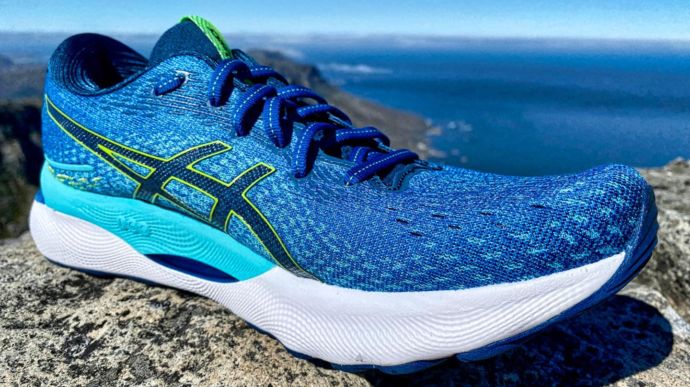 The ASICS Gel-Nimbus 24 is a super soft max cushioned trainer with a versatile ride. It has an onslaught of new updates, the biggest one being the addition of FF Blast+ foam in its midsole. Version 24 is lighter, nimbler, and bouncier than version 23 but it has a less plush upper and isn't as sturdy.
WHERE TO BUY
LOWEST PRICE
$98
SHOE INFO
Asics
Brand
Gel Nimbus 24
Model
Cushioning
Type
10.2 oz. (289 gr.)
Weight
159.95 US$
MSRP
36 mm
Heel
26 mm
Toe
10 mm
Heel Drop
Asics Gel-Nimbus
Family
Gel Nimbus 23
Previous model
WHO IS IT FOR
If you're looking for a soft, highly cushioned trainer which can handle a variety of paces, the Nimbus 24 is for you. The Nimbus 24 is one of the lighter max-cushioned trainers available and has a more breathable upper than most.
Help me choose

You get some trainers like the Nike Pegasus and the Brooks Ghost which have such similar rides from iteration to iteration that it’s hard to tell the difference between the old and the new version.

Then you get other trainers which change significantly with each update. The Nimbus is an example of the latter. The trend of the Nimbus over the past 3 years is that it receives massive updates and gets substantially better upgrades every year.

This new approach by ASICS has allowed the Japanese company to continually keep things fresh while also advancing beyond its competitors when it comes to running shoe technology.

The new Nimbus 24 is now one of the lightest, bounciest max-cushioned trainers on the market and it’s definitely worth upgrading to the Nimbus 24, even if you have the Nimbus 23.

I was really impressed with the Nimbus 23 last year. I enjoyed its squishy underfoot feel and its luxurious upper. This year, I found the Nimbus 24 even more impressive.

When I first saw videos of the new Nimbus, the thing that I was most excited about was the new midsole foam, FF Blast+.

ASICS claims that this new foam is 15% lighter, 15% softer and 12% bouncier than the Novablast 2’s FF Blast foam which is already very bouncy.

My first run was a 12 km easy run. This was unlike any Nimbus that I’ve ever run in and it reminded me more of the Nimbus Lite spinoff series than any other previous Nimbus.

The new Nimbus 24 felt really flexible, energetic and super soft. This Nimbus wanted to go fast, unlike the Nimbus 23 which was more suited to slow runs.

The new thin tongue felt a bit out of place on the Nimbus 24 because all the previous Nimbus versions have always had thick, padded tongues.

The Nimbus 24 had a similar underfoot feel to the Novablast 2 but with more stability and less bounce. The Nimbus weighs slightly more than the Novablast but both of them had really lively rides.

I’ve run in tons of max-cushioned trainers over the years and the Nimbus 24 is the softest, with exception of the Nike Invincible Run but unlike the Invincible, the Nimbus feels much more nimble because of its thinner midsole.

What I like most about the new FF Blast+ midsole is that it makes the Nimbus 24 feel less bottom-heavy. It feels like a much more balanced shoe compared to previous Nimbus versions.

The Nimbus 24 also has a greater range now when it comes to speeds. Not only does it feel comfortable at slow speeds above 6 minutes per km pace but it can also handle faster paces around 4.30 with no problem. The sweet spot for me was around 5.15 per km.

When I tested the Nimbus 23 on long runs, I experienced foot fatigue because of how spongy its midsole was but in the Nimbus 24, I didn’t have that problem. The Nimbus 24’s midsole springs back quickly after it’s compressed so it doesn’t feel like you’re fighting with the cushioning.

The only negative aspect of the super soft FF Blast+ is that it’s brittle. After only 62 km, I noticed that there was a big, deep gash in the outer heel where something sharp had pierced the midsole. This wouldn’t have happened with a full Flytefoam midsole.

The Nimbus 24 has a dual-density midsole setup. There’s firmer Flytefoam on the top, in the heel and forefoot with FF Blast+ on the bottom layer, throughout the length of the shoe. This setup makes the heel and midfoot slightly firmer than the forefoot and it also makes heel and midfoot landings more stable.

Speaking of stability, the Nimbus 24 has an acceptable level. It has a wide midsole base and its midsole is medium thickness so there isn’t much lean bias.

A big difference between the Nimbus 23 and 24 is that in the 24, the Trusstic system has been changed to a floating plastic shank situated in the middle of the midsole instead of on the outsole. We also saw this with the Kayano 28.

I enjoyed this change because it results in smoother ride transitions and a less intrusive Trusstic system without sacrificing midfoot stability.

There’s relatively little rubber on the outsole of the Nimbus 24 for a daily trainer. It has AHAR+ on the heel and softer AHAR on the forefoot.

I found the outsole rubber durability below average. After 80 km, I’ve noticed significant wear on the outer lateral heel which is disappointing for such an expensive shoe but the outsole has good grip on wet surfaces.

On the Nimbus 24, the big change is the tongue. A super thin, stretchy, knitted tongue has replaced the normal thick, padded tongue.

For me, this new minimal tongue feels strange because most max-cushioned trainers have thick, padded tongues. A thick tongue makes the upper feel plusher and more luxurious but on the Nimbus 24, the thin tongue makes it feel like a speed shoe and I never got used to it.

The knitted tongue is semi-gusseted so there’s no tongue slide and it’s also the perfect length. The thin tongue of the Nimbus 24 makes it a cooler shoe because it lets more air into the vamp of the shoe so this Nimbus might not be suitable for freezing cold temperatures.

The heel counter and collar are still generously padded so foot lockdown is excellent. There are also double first row eyelets for heel lock lacing but you don’t need them because heel lockdown is so good.

I don’t usually have fit issues with ASICS trainers but the Nimbus 24 is oddly too short for me. My toes are right at the end and I had some toe discomfort because they couldn’t splay properly.

I would definitely buy a half size larger than my usual size if I bought another pair.

The Nimbus 24 would be the result of if the Nimbus 23 went on a diet: it’s leaner, nimbler and more evenly balanced. It has a more versatile ride character and smoother transitions.

Even though the Nimbus 24 is vastly different to the Nimbus 23, I think that the majority of Nimbus loyalists will prefer the 24 because of its softer ride and its lighter weight.

I’d choose the Nimbus 24 over the Nimbus 23 in a heartbeat because I can use it for faster-paced runs as well as easy/recovery runs. I still wish it had a padded tongue but the absence of it makes it a cooler shoe for summer runs.

I feel that the Nimbus 24 is more suited to a lighter runner like me because it’s softer and more agile than previous versions. Conversely, it’s less suited to heavy runners (90 kg+) because it isn’t as sturdy.

The Nimbus 24’s biggest weakness is durability. It has a fast-wearing outsole and its super soft FF Blast+ midsole is susceptible to cuts and abrasions. You’ll want to keep it far away from trails.

As editorial policy, we do not accept free samples from companies.
We purchased this pair of ASICS Gel Nimbus 24 at Running Warehouse with our own money.

Visit ShopAmazon.com
This page contains affiliate links. As an Amazon Associate I earn from qualifying purchases.
WHERE TO BUY
LOWEST PRICE
$98
AVAILABLE ON SALE:Previous model $61