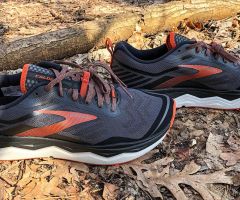 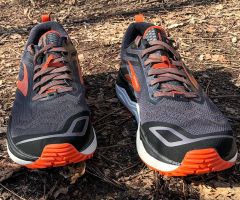 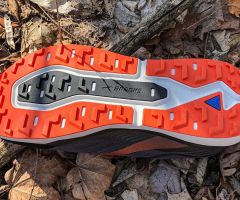 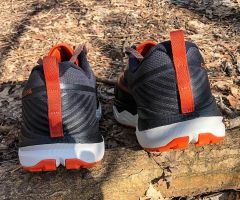 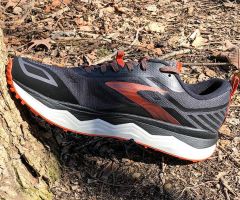 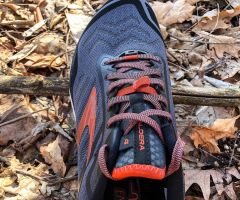 The Brooks Caldera 4 offers a significant upgrade from its third-generation predecessor. But there is still a lot to like. The new Caldera is lightweight, stable comfortable, though it is stiff and takes longer than its peers to break in.

I was interested in testing the fourth edition of the Brooks Caldera (10 ounces for a men’s size 9; 8.9 ounces for women’s size 8).

After all it had been a while since I tested the Caldera 2, a shoe that I praised for its “strong balance of speed and durability on natural trails, roads, paved trails, fire roads and most other surfaces.”

Most of that remains true even as Brooks made changes to this version of the Caldera. First, it handles the same types of terrain pretty much the same way.

For those who are able to run on roads or sidewalks to trailheads, the Calderas would be a suitable option. But I would not recommend them for much more than moderately technical trails.

The lugs are on the small side and the gripping is lacking. I put quite a few miles on the Calderas on wet or muddy trails.

Even on moderately slippery surfaces, the Caldera did not measure up to others in terms of grip.

That said, the shoe does work really well for a midweek trainer when a runner just wants to put in some easy trail miles.

Among the most significant changes is the new engineered mesh upper. The Caldera 3 had minimal overlays while the new version is quite the opposite as Brooks seems to have emphasized the overlays.

The Caldera 4 has a 4mm drop so runners like me who a zero drop shoe does not work well for could take comfort in the larger toe box.

The Caldera uses Brooks’ BioMoGo DNA EVA for its midsole material. Even though Brooks added stack height to this version, the shoe itself did not sacrifice any flexibility, which is good because it didn’t have much to begin with.

The fourth edition boosts protection well over previous models. The improvements include significant protection against rocks, roots and other trail debris.

I could not identify a time when such an obstacle created an issue with either of my feet.

If only the traction was suitable for technical trails Brooks would have a solid option for trail runners who seek challenging terrain.

As mentioned, the mesh upper secures the foot and appears to be durably constructed, while the heel is snug. The Caldera 4 handles water crossings well and dries fairly quickly.

Additionally, the new Caldera uses fewer but larger lugs. These are probably best for keeping the shoes durable but your running experience may not be as pleasing.

For the outsole, Brooks uses its sticky TrailTack rubber. This is what allows the shoes to be used for a combination of paved and trail terrain without damaging the shoe.

If you want responsiveness, the Caldera is decent when it comes to navigating through a section where you want to pick up speed a little but not over a significant distance.

There is much to like about the shoe but it is not an optimal choice if you want to go fast.

There are some similarities between the Brooks Caldera and Cascadia.

For runners who are out for training runs or easy runs on less than moderate terrain, I would recommend the Caldera.

For more moderate terrain and faster speeds, the Cascadia would be a good option — thought it could also serve you well as a midweek trainer.

For runners who love lots of cushion in a shoe, the Caldera 4 is a good bet. The fourth generation offers three more inches of stack height, yet keeps the same 4mm drop.

As I noted previously, the shoes feel tight longer than other models.

However, once they are broken in, the comfort lasts after the training run. After a recent 10-mile training on basic trails, my legs felt fresh throughout the remainder of the day.

That’s partially due to training but is also a credit to the cushioning Brooks has adopted for this model.

The cushioning is not all underneath the shoe. Its heel collar offers a proper amount of padding, another upgrade from previous models.

The Brooks Caldera 4 is an improvement over its predecessors and fits in a niche – a solid yet unspectacular everyday trainer for easy runs and trails. It is also a good option for road-to-trail runs. And its roomy toe box gives runners seeking that another option.

On the other hand, I feel like Brooks is playing catch up as other brands have upped their games.

Here’s how it compares to some other recent models I’ve reviewed:

Hoka Speedgoat 4: The Speedgoat would be my pick for just about everything. It can handle more technical terrain and also is better for speed.

Saucony Peregrine 10: I had some heel soreness when using the Peregrines so I would opt for the Caldera here for basic training runs.

The Caldera 4 offers superior cushioning to the Peregrine. But the Peregrine is better suited for more technical terrain.

The Wildhorse offers more protection and can handle tougher terrain, while the Caldera probably has a bit more speed and is well suited for easy trails, dirt surfaces and paved sections.

$65.00
was $140.00
See deal
20 people viewed these deals in the last 24h
This page contains affiliate links. As an Amazon Associate I earn from qualifying purchases.

About the Brooks Caldera 4

I run over 40km per week, I use them primarily for running

A lot of cussion and good hold of your foot. Work well on tarmac and on quite technical trails. Stiff shoe and require more break in than other shoes. Unfortunately... Read more it did not fit my foot. Got blisters on medial side forefoot. Light and fun to run.

About the Brooks Caldera 4