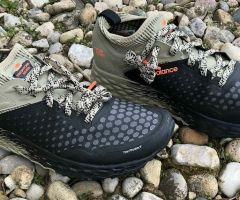 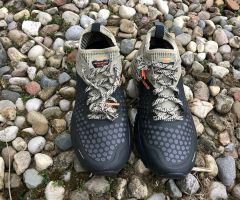 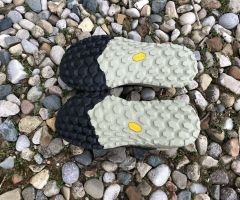 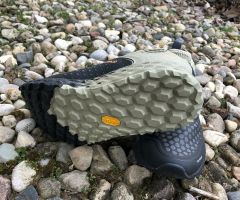 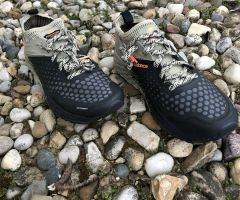 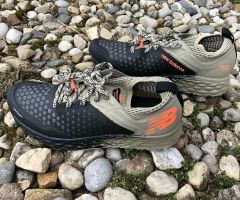 Best for on dirt trails, over very rocky area, along highly technical trails

The New Balance Hierros are built for the trail runner who seeks protection and has patience in getting his or her feet into the shoes.

The shoes are rugged, offer superior protection and the color schemes mask the natural colors of most trails. For me, the shoes represented more of a slimmed-down hiking boot that would not be among my top choices for most trail runs.

The fourth version of the Hierro (8mm drop) has its share of supporters. Among them: runners who seek out debris-riddled trails, off-the-beaten-path adventures and/or significant climbs.

A reinforced toe cap complements the toughness New Balance packs into the makeup of the rest of the shoe.

New Balance’s commitment to a protective shoe also extends to the bottom. The aggressive lugs and the breathable forefoot combine to provide support and confidence for the runner.

Overall, the Hierro V4 didn’t change much from its predecessor, but it did remove some of the hypo-skin that coated the v3’s upper.

Some of that layer remains and it does a decent job of protecting the feet from water and creating a more breathable shoe.

I would not recommend it for road runners. Though it would work well in virtually any type of weather.

However, I found the Hierros (11.5 ounces for men; 9.4 ounces for women) to be bulky, slower to respond and a pain to get on and off my feet.

The narrow opening for the feet does it job in keeping debris out. At the same time, it takes a significant amount of time to wrestle one’s feet into place.

That may not be a big deal when starting out on a casual training run or long day in the mountains. But on race day, or when in a hurry, it’s a significant drawback for the shoes.

While I rarely consider the color options of my running footwear, I did find the earthy, brownish tones of these shoes to be a turnoff.

New Balance understands the niche it is trying to fill here. The Hierros are designed from top to bottom and heel to toe to accommodate runners on technical trails.

In addition to the shoe’s aforementioned attributes, the Hierros boast a sturdy rubber in the toe bumper to handle rocks, roots, sticks and more.

Feet are secured in the Hierros, thanks to its ankle-hugging upper. In doing various trail miles, I never felt like the shoes were working against my feel.

They were secure and could traverse rocks and other obstacles with confidence.

The Hierros are not only built to withstand the challenges of the trail, their construction is intended to be durable.

After 50ish miles, the shoes did not seem to show any wear or tear from the pounding I gave them.

While my trail miles were not on highly technical terrain, I have no doubt that they would be able to withstand a similar pounding on more technical trails.

Oftentimes, trail and ultra runners make a choice: single-track trails where they can push their speed, or technical trails that are great for climbing at slower paces.

For runners with the New Balance Hierros, speed is not part of the equation.

Even on single-track trails with minimal turns, trail obstacles of hills, the weight of the Hierros held me back from hitting top speeds.

But that’s not whats they are built for. Expect the Hierros to excel on highly technical terrain, just know that you won’t be able to accelerate fully with them.

New Balance’s Fresh Foam offers a good amount of cushion with a sponge-like, dual-density padding underneath. I would say it’s about average when compared with other trail shoes in its class.

The cushioning contributes to the overall protection when encountering trail debris and obstacles. The outsole is Vibram and offers excellent traction.

I did find the fit of the Hierros to be tight. Even after 50 miles, the shoes never loosened up to provide comfort when running.

I would consider the fit to be tight, though others who have run in these shoes say that the fit — primarily in the toe box — is better than in previous models.

I can see why the Hierros have their supporters, though I am not one of them.

For runners who regularly trek through trails with unrelenting debris, these shoes would bring welcome relief from hard pebbles, dirt clumps and other annoyances that don’t belong in one’s shoes.

Additionally, those who take to the mountains for their adventures would also find these shoes to their liking.

But for me, it was difficult to get past the difficult in getting the shoe on and the lack of comfort during a run.

$64.00
was $140.00
See deal
28 people viewed these deals in the last 24h
This page contains affiliate links. As an Amazon Associate I earn from qualifying purchases.

About the Hierro v4

About the Hierro v4