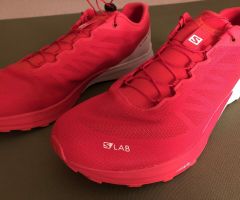 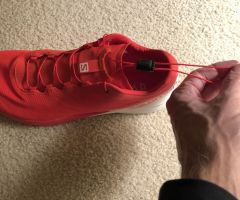 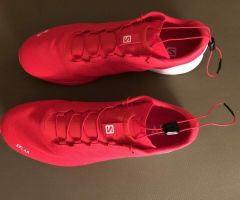 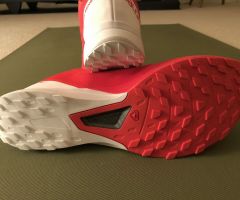 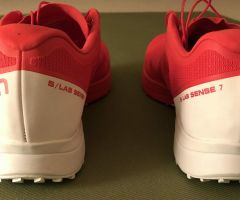 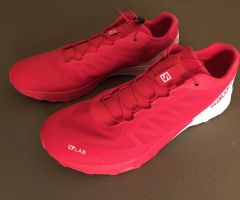 Speedwork on flat surfaces, short trail races (up to half marathons)

I was excited to try out my first pair of Salomon trail shoes. That excitement continued as I slipped them on. They are comfortable and just feel like a lightweight, fast shoe, built for cruising through single-tracks. But my joy waned the more I wore them and discovered that they lack the durability I need in a trail shoe.

The Salomon S-Lab Sense 7 is designed as a speedy, minimalist shoe. But it does come at a price — $180 — that may be off-putting to some, especially when the shoe’s durability comes into question.

To be fair, the shoe is not designed to handle rugged, technical trails. If it is speed you want, the seventh version of this model will provide that and is an improvement over previous models.

I found myself able to glide through single track and smooth trails with ease in the Salomon Sense 7 (7.6 ounces for a size 10 men’s). The 18mm/14mm drop works well for me.

It struck me that the shoes actually have decent room in the toe box, even though they are shaped for speed. During my runs, I never felt my toes being cramped like I have experienced in other minimalist shoes. Salomon’s unique lacing style looks odd at first, but it works well to secure the foot in place comfortably. (The one downside is that after a muddy/wet run, the lace connection got jammed up so it took some manuevering to free it in order to get the shoe off.)

When it comes to protection, let’s start out in the front. The toe bumper is a bit of a misnomer. It is basically a thicker reinforced mesh that tries its hardest to protect the foot. On lesser technical trails, runners may be accepting of a random rock or two that they kick. But on more technical terrain, the lack of protection becomes more of an issue.

In the back, the heel counter is low and keeps with the shoe’s minimalist approach. However, it does appear to be secure.

The padding around the collar is once again minimal. Probably good enough up to moderate trails, but could be an issue on more challenging terrain.

I saw the Salomon Sense 7’s begin to age as I wore them on more challenging trails. It will not perform well on rocks or trails packing a lot of obstacles in the runner’s way.

That said, it is important to note that the lugs do provide some support through the mud. The lugs are widely spaced, which allows for a cushioned feel though, as noted, it does slow the runner down. This is an important distinction, especially for those who do a lot of training and/or racing in wet or muddy environments. The shoes would, I believe, perform well on cross-country courses even through wet grass or muddy spots.

During my first run with the Salomons, I tested them on a fairly flat trail with minimal technical challenges. They performed superbly, allowing me to hit that extra gear when I wanted to.

However, the more challenging the trail became, the less useful the shoe became. It was challenged by mud, more so than other shoes I would consider to be on the faster side. Same goes for snowy or sandy areas. For those who love the shoe, it’s important to understand on what surfaces it can be most beneficial to the runner.

The shoe gets well-deserved kudos for its single-layer breathable mesh upper. Somehow Salomon has figured out a way to produce really thin, light, ventilated and quick-to-dry shoes. The fit is secure, partially because of the thin overlays that combine with the booty like SensiFit system.

If I had these last summer, I definitely would have worn them for my half marathon trail race that was mostly on a cross-country course. However, I am looking at longer, more technical races this year, and don’t see the Salomons being an option.

In my several years of testing and reviewing shoes, there is perhaps no other shoe that has quite capably filled its niche than the Salomon S-Lab Sense 7. If it’s speed you want for a short to medium length race on mild terrain, this will be a solid choice.

However, when presented with challenges from muddy terrain to root-strewn trails to ultra distances, the shoe loses a lot of its luster. As with other shoes built for speed, these conditions pose a challenge.

But if it’s speed you need, the Sense 7’s are a solid option that will allow you to cruise down the minimal to moderate trails.

About the Salomon S-Lab Sense 7

About the Salomon S-Lab Sense 7