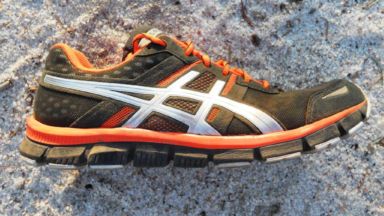 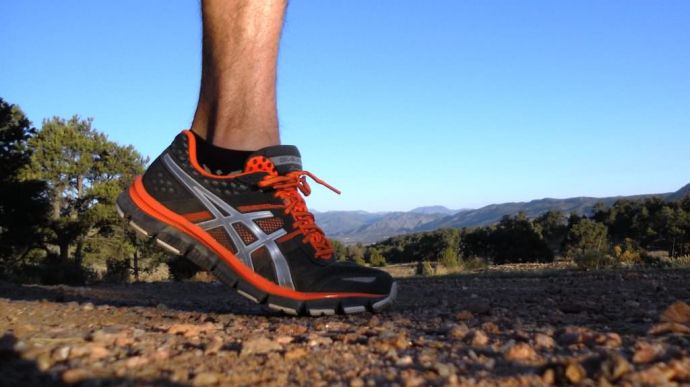 Asics is definitely moving in the right direction by taking their excellent cushioning technology and putting it in a stripped down and more flexible shoe.
WHERE TO BUY
LOWEST PRICE
$85
SHOE INFO
Asics
Brand
Gel Blur 33
Model
Minimalist
Type
10.3 oz. (292 gr.)
Weight
85 US$
MSRP
WHO IS IT FOR
Runners looking for a minimalist feel with added cushioning. Neutral runners looking for a responsive, flexible, and relatively light daily trainer.
Help me choose

Asics always seems to be the company that sticks to its guns the longest when creating, or recreating, models of their running shoes. Any runner trying the ever popular DS-trainer or 2100 series can basically find the same shoe from year to year, only having to stomach aesthetic changes to their favorite workhorse trainer. However, this time Asics breaks the mold to create a refreshing and responsive shoe without many bells and whistles. The Marketing for the Blur 33 included the descriptor that it was a “minimalist shoe”, and while the Blur 33 does not live up to that moniker it will appeal to a broader audience looking to move in that direction.

The Blur 33 may strike some as Asics version of the Nike free due to the segmented and highly flexible outsole. This is simply not true, and the feel of the Blur 33 is a fully realized trainer stripped down to allow greater flexibility in the mid foot, a lower heel drop (10mm), and surprisingly soft and responsive cushioning. While there are days that I wish I could strap on a racing flat and hammer out a long tempo run, the carnage to my body would simply be too great. The Blur 33 is a shoe that gives me the free and flexible sensation of wearing a minimalist shoe with the protection of a neutral daily trainer.

The Blur 33 uses an open mesh design that is highly breathable with supportive underlays, something which is becoming the industry standard for most shoe companies. Overlays are kept to a minimum outside of the supportive Asics logo which hugs the mid foot area securely but not too tightly. The heel collar of the shoe uses memory foam designed to maintain the shape of one’s heel and provide a form fit. The toe box of the Blur 33 is wide, typical of Asics accommodating fit, and allows plenty of room for toe splay.

One complaint that I have about the Blur 33 is the seemingly plush, yet ineffective, cushioning throughout the tongue of the shoe. Asics uses fat oval shaped laces which are far too short to double knot. The combination of these laces and poor tongue cushioning led to some metatarsal discomfort when lacing the shoes, and I often had to stop and retie them to alleviate pain. Once I found the correct about of tension they never needed to be readjusted.

Solyte, Asics soft and responsive EVA cushioning material, runs throughout the midsole of the Blur 33 providing a responsive and springy feel. A gel cushioning pod is located in the heel but what I found pleasing about the Blur 33 is how well is accommodates forefoot and mid foot strikers just as well as those prone to heel strike. The Blur 33 does not have any motion control devices within the midsole and those runners needed additional support should steer clear of this shoe. Neutral runners and supinators will delight in how simple and unconstrictive this shoe feels, allowing the foot to move freely and functionally.

The segmented nature of the Blur 33 makes it the most flexible Asics trainer in their line. This segmentation is hardly noticeable during runs and doesn’t effect the transition from the heel to toe of the shoe during the runner’s gait. Noticeable absent is the Trusstic System, a thermoplastic device placed in the mid foot area of most Asics shoes which greatly reduces flexibility. A new version of the Trusstic System will be implemented in newer models of the 33 line, such as the Excel 33 and Hyper 33 to be released shortly.

Looking at the shoes outsole one can clearly see how deep the flex grooves are and can notive the Guidance Line, a carved vertical flex groove that extends from the heel to the toe, allowing the foot to align to its most efficient gait and forgiving some of the runner’s mistakes.

Asics departed from the norm with the production of the Blur 33 and I think they have found a simple, yet elegant design. I will call this shoe “pseudo-minimalist” as it has a lower heel drop (10mm verses Asics typical 12mm), a flexible feel due to the segmented outsole, and soft responsive cushioning without extraneous motion control devices. Having put approximately 100 miles on these shoes I have not experienced any durability issues and I imagine that these shoes would hold up fine for 500 miles of normal wear.

Asics complimented this shoe with a modest price tag that won’t break the bank of some blue collar mileage hogs. Furthermore, with aesthetics that are reminiscent of Asics trainers from the early 1980s, the Blur 33 is a simple pleasure to wear on your next run.

We thank the nice people at Asics for sending us the Blur 33 for review. This didn't influence our review of the shoe, written after running more than 100 miles in them.