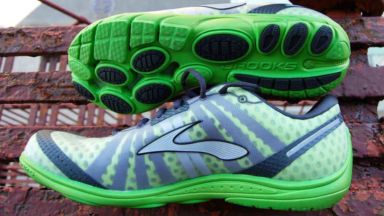 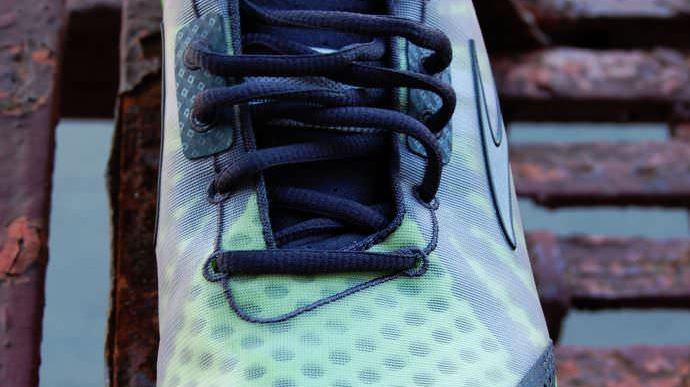 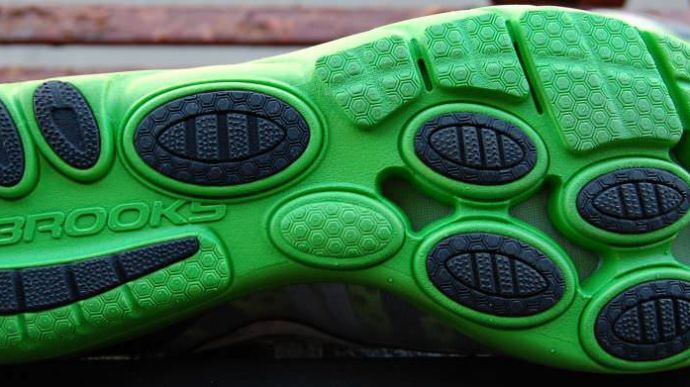 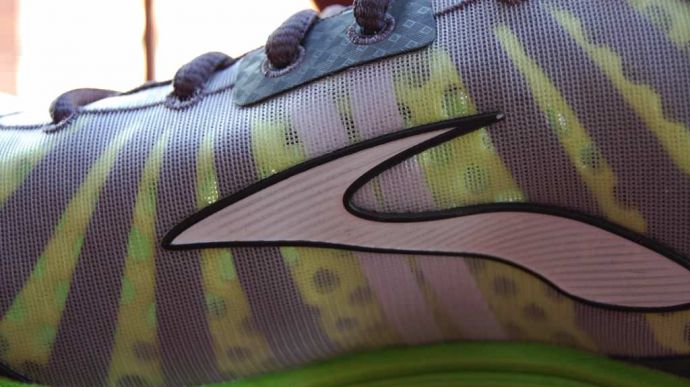 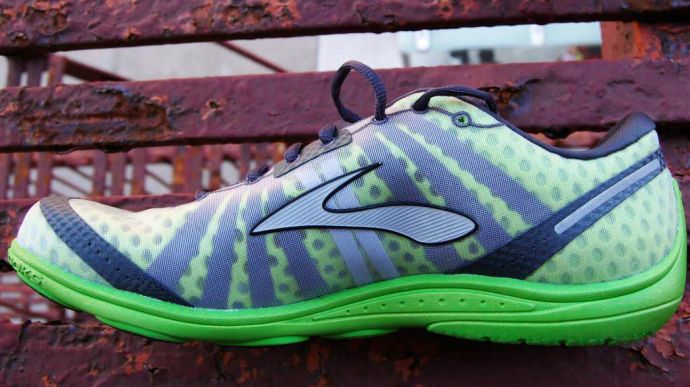 Brooks has definitely been thinking out of the box, and created a unique natural feeling shoe. This will definitely set a new standard for others to follow in the lightweight neutral/ minimalist shoe category. This is an absolute winner great new innovations.
WHERE TO BUY
LOWEST PRICE
$$90 US
SHOE INFO
Brooks
Brand
Pure Connect
Model
Minimalist
Type
7.4 oz. (210 gr.)
Weight
$90 US US$
MSRP
WHO IS IT FOR
Efficient neutral runners/ overpronators/ slight underpronators, especially those who mid foot or forefoot strike. Or runners transitioning into a minimalist shoe.
Help me choose

Two of Runningshoesguru.com's reviewers, Tom Caughlan and Jim Coulson, decided to co-review this shoe.  We'd like to thank Brooks for sending them both a pair to test.

After logging some training miles (100 miles for Jim, 48 miles of Tom) in the Pure Connect we have to say that this statement isn’t far off. Brooks completely broke the mold of what was considered a successful running shoe in their line to make the Pure series, the closest relative of which is the Brooks Green Silence.

This Radically new and impressive line of minimalist shoes has began to create a lot of buzz within the running community. With its anatomical fit and use of lightweight flexible materials the collection has definitely impressed us along with many other runners, and raised the bar for what a minimalist shoe should be. The PureConnect is the lightest and most flexible shoe in the line, and at its core is designed to put as little as possible between you and the surface you’re running on.

Tom: When I first took the Pure Connect out of the box it reminded me of old Nike Waffle racers or even a cross country racing flat. There isn’t a sharp edge on the sole; all rounded corners that you would typically see on a cross country or trail shoe than one engineered for the road. The shoe is featherweight at 7.2 ounces and when I slipped them on I noticed several things. First, the Pure Connect is fairly narrow, especially in the mid foot, which may make it a problem for runners with wide feet. Second, there is a noticeable arch cushioning feature which really hugs the arch. This may upset some pure minimalist runners who prefer absolutely flat shoes. Third, the Pure Connect runs 1/2 size small and I was lucky enough to have both my usual size 9.5 US and access to a size 10. The 9.5 gave me blisters on both heels and felt constricting. After sizing up to the 10 my feet felt like they had ample room and any friction issues disappeared.

Jim:The PureConnect uses very minimal Overlays, and is primarily composed of open mesh. It was refreshing to see that the use of plastic on the upper was almost non-existent. Slipping on the shoe for the first time was amazingly different than anything that I have worn up to this point. The Shoe was glove like and hugged every contour of my foot almost as if it had been tailored just for me. The sole was also much of the same lying firmly against my foot and traveling its contours nicely. By this point I am guessing that many of you can tell that the shoe locks your foot down well, and for myself ran true to size. However, many runners have complained that the shoe has run too small and did have to order a ½ size up. Right away I could notice the midfoot support that was created by a large support pod placed midfoot on the sole. The toe box was snug but very flexible giving it a roomy feel.

The upper of the Pure Connect is very simple, breathable, and functional. It is comprised of an open sandwich mesh on the inside, and then covered by a thin tight mono-mesh. At first glance the shoe appears thin and weak, but surprisingly it has been able to take some abuse. A micro suede underlay sandwiched between the two layers reinforces most of the open mesh. This undlayment rays or fingers out from the laces and splays out into the midsole.

Simple overlays with reflective accents band the heel and toe with the Brooks logo incorporating itself into the lacing system all providing additional strength and support. Running bilaterally up the sides of the shoe and across the top of the tongue, and unique to the PureProject line, is the Nav Band. This elastic band that wraps the instep is intended to provide a more glove like fit. Runners complained of this feature being useless on the Brooks Pure Grit, the Pure Connect’s trail cousin, but the Nav band on the Pure Connect is taut and does hug the mid foot a bit better. After wearing the shoe on a couple of runs I really didn’t seem to notice that band made that much of a difference. Don’t get me wrong there was definitely not a lack of support or a sloppy feeling. I was just expecting to feel something a little more additional above what the rest of the shoe already provided.

The heel collar is comprised of a thin well-placed layer of foam that provided the right amount of protection and support without being overly bulky. The actual heel of the shoe is also a new design unique to the PureProject collection that they have deemed the Ideal Heel. The idea of the this new design is to shift contact points forward aligning your center of gravity, and encouraging a more natural midfoot to forefoot foot strike. The heel was very form fitting and did align my foot perfectly causing no discomfort or slip.

The toebox of the shoe fits well and as we mentioned earlier is snug. However, with the uniqueness of its materials and flexibility the toebox is nice and airy and allows for ample movement. A thin microsuede tongue fit and protected my foot without rolling off center and bunching up which I appreciated. Tubular oval laces with a beaded pattern starting at the aglet, helping avoid lace slippage, secured the shoe and remained tied causing us no discomfort.

The first thing we noticed about the full length Bio MoGo midsole is that there isn’t a hard edge or corner on the shoe. Every aspect of the midsole is rounded which seems to promote a more natural footfall and transition through the gait cycle. The Bio MoGo midsole also contains Brooks DNA gel like cushioning material and it is a soft, responsive cushioning which seems very resilient. Despite continued pounding on the roads and trails the cushioning seems to stay fresh and not compacted.

Being that the Pure Connect is a neutral running shoe with minimalist features there are not any stability features or interruptions to the natural stride. The 4mm heel to toe drop (the industry standard is 12mm for road shoes) helped keep us running on our mid feet with a high running cadence. This felt to us like the right amount of cushioning which didn’t leave us feeling beat up after long runs.

As with all of Brooks shoes the PureConnect uses Brooks unique Bio MoGo midsole. This for those of you new to the technology it encourages anaerobic microbes to eat away at the sole once it hits an active landfill. This makes it the most biodegradable midsole on the market. Along with the Bio MoGo midsole Brooks DNA, a non-Newtonian cushioning gel, has been blended in eliminating the use of drop-ins.

The Outsole of the Pure Connect is fairly simple. Brooks placed durable carbon rubbers over the cushioning “pods” in high wear areas of the shoe. Our favorite feature is the “Ideal Heel” which apply describes how Brooks created a rounded heel to aid in natural foot strike. Having taken these shoes on trails which are cambered and uneven the PureConnect really adapts due the the rounded nature of the midsole and outsole.

We can tell by looking at the outsole that the (medial) inside of the heel is slightly higher than the outside (lateral). This is common for many road shoes and it does offer some medial support for slight overpronators.

What we both really enjoyed about this sole what its Anatomical Last construction. The detailed anatomical form really seemed to fit the shape of our feet well, and moved and flexed throughout the run unlike anything we have ever experienced. Brooks also uses an individualized sole pod design versus a traditional one piece sole. This sole pod design really helps adjust to your individual impact points and really gives you that barefoot feel.

Toe Flex technology helps to finish off the rest of the sole. A split placed in the front of the sole lateral of the big toe is designed to encourage your natural balance. The thought is that by freeing the big toe and allowing it to splay and move independently the foot will allow the foot to move, as it should naturally as if barefoot. We were initially skeptical during but found that the split allows the big toe to splay during toe-off. We really noticed this during tempo runs and intervals, as it really seemed to give me a more powerful push-off.

Jim: Brooks have definitely taken the minimalist shoe one step further with the PureConnect. The simple, flexible, lightweight, and airy design really give this shoe a good balance between barefoot minimalism and the cushioning required for daily training. I found the shoe to be super responsive and fun to run in. I have put approximately 100 miles on the shoe over varying terrain and have not have had any durability issues or discomfort whatsoever. The PureConnet has been a pleasure to wear and run in, and I would encourage those looking for a solid minimalist shoe to look no further that these.

Tom: The PureConnect fills a gap in the current shoe market between what is truly minimalist and what can be utilized as a performance training shoe. The PureConnect feels like a racing flat/ cross country flat with better cushioning and durability. They are simply a joy to run in and I find myself neglecting other shoes for the feeling of freedom inspired by the PureConnect. Speed work, tempo runs, long runs…whatever. The PureConnect can do it all.

On a safety note, be careful when transitioning to a shoe with a 4mm drop. If you have been running in a bulkier, traditional trainer with stability or motion control, this transition should be very gradual.