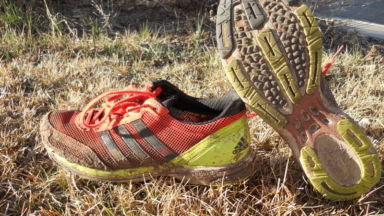 Adidas makes small improvements on to better one of the world's most popular marathon racing flats.
WHERE TO BUY
LOWEST PRICE
$115
SHOE INFO
Adidas
Brand
Adios 2
Model
Racing
Type
7.8 oz. (221 gr.)
Weight
115 US$
MSRP
WHO IS IT FOR
-Any runner looking for a well cushioned and supportive racing shoe.
-Serious marathoners and those who like to wear racing flats in training looking for durability.
Help me choose

You can’t argue with a shoe worn by the emperor, Haile Gebrselassie, in his world record marathon run. Go to any road race and you are bound to see many runners sporting the original Adios, and this year alone I witnessed professional runners wearing the Adios to win the Boston marathon, Pikes Peak Ascent (mountain trail race), and the Imogene Pass Run (mountain trail race). That is quite the testament to a shoe that is engineered for the roads and is able to handle technical trails as well.

The heritage of this racing shoe is a well cushioned, performance oriented flat with a great transition and a fit that will appeal to a wide range of feet. Adidas had no need to completely overhaul this shoe and simply made some positive tweaks to the upper, heel drop, and outsole which resulted in an incremental improvement on what is already one of the best racing shoes on the market.

Adidas uses their CoolEver mesh throughout the upper with sewn overlays similar to the original Adios. Synthetic leather reinforcements were made around the outside of the toe box where some runners experienced punching through the mesh with wear. The heel cup and collar of the shoe stay basically identical and a more abrasion resistant material is used over the heel of the shoe. The lacing system is fairly traditional here, incorporating the placement of Adidas’ three stripes as support through the upper into an excellent mid foot fit. Adidas used the CoolEver mesh throughout the tongue of the shoe which is a bit more minimal than the original Adios.

The fit of the Adios 2 should accommodate a wide variety of foot types with a fairly medium fit throughout the heel and mid foot before spreading out to an accommodating toe box. I have a medium D width foot and I struggle wearing any shoe with a narrow forefoot. The Adios 2 upper is very lightweight and malleable but the construction is pretty ballistic for a racing flat at this weight.

Full length Adiprene is ample through the heel and forefoot which provides a firm but supported feeling. Adidas added CMEVA, a compression molded EVA, underneath the Adiprene which really seems to mold to the wearer’s foot and holds up to a great deal of pounding. The Adios 2 is intended for neutral runners and their isn’t any sort of mid foot shank or dual density midsole for added support. However, Adidas did extend the torsion system in the mid foot which decreases twisting and rotation throughout the gait cycle. Arch support is fairly non-existent which is true for most racing flats and Adidas fans will appreciate the traditional fit.

I often get asked to describe what particular cushioning feels like on the road and each shoe company has their different EVA foam which has its own feel. Adiprene is a firmer cushioning which many runners don’t like the feel of when they first put them on. However, it really shines on the road and the Adios 2 is made for long, fast workouts and racing. It also really holds up for many miles which is pretty rare for a racing flat. If you’re the type of runner who does a lot of training in flats and is looking for something to get to that 500 mile mark, the Adios 2 is likely your best bet.

My favorite change for the new Adios is that Adidas lowered the heel drop of the shoe from 12mm to 9mm. Stack height remains relatively the same but the reduced heel drop means that the forefoot gains about 3mm in cushioning. The added cushioning in the forefoot is noticed and appreciated and improves the ride of this shoe a great deal.

Adidas updated the Adios outsole a great deal adding the longer torsion system, which is a thermoplastic unit on the bottom of the shoe, to improve support during toe off. Continental Tire rubber was used along areas of high wear and provides for some extra tacky traction, especially on wet roads. One feature I really liked is that Adidas added some tacky nubs, for lack of a better word, in the middle of the outsole in the mid foot and forefoot area which really grab the road. After about 200 miles on the Adios 2 some of these nubs are a bit worn down but still effective.

The running shoe term “ride” is a fairly ambiguous concept referring to how the shoe feels from foot strike through toe off. The Adios 2 comes about as close as possible to nailing what “ride” should feel like for a long distance racing flat which has made it a very popular shoe for elite, and sub-elite, marathoners. By lowering the heel drop Adidas improved on the feel of the original while maintaining the firm responsive comfort of the full length Adiprene cushioning. In fact, the feel is good enough that I found myself eschewing lightweight trail shoes at times to enjoy the feel of the Adios 2 off road.

While the Adios 2 is intended for neutral runners I would recommend this shoe to underpronators or overpronators looking for a supportive race day shoe, especially for the marathon. What is lacking in midsole support is made up for by the torsion system which really does provide adequate support for a racing shoe. The durability is top notch for a racing flat and those looking for an all in one short distance to marathon racing shoe need to look no further.

Adidas is very proud of their world record setting marathon shoe and this is reflected in the price. At $115 MSRP that places the Adios 2 at a much higher price point than its competitors and could be a deal breaker for some runners.

We thank Adidas for sending us a pair of Adios 2 to test. This did not influence our review of the shoe, written after more than 50 miles in them