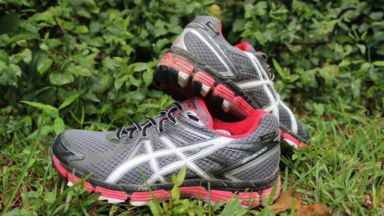 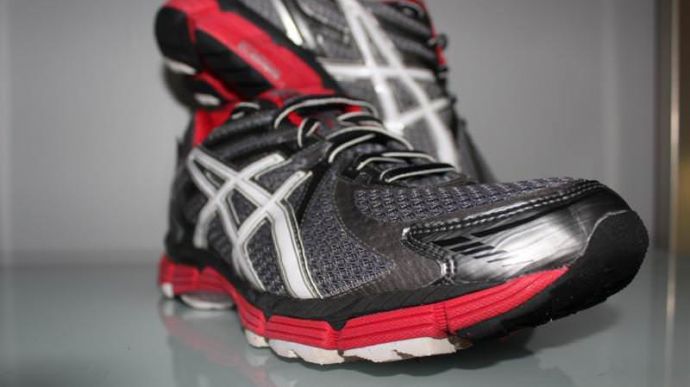 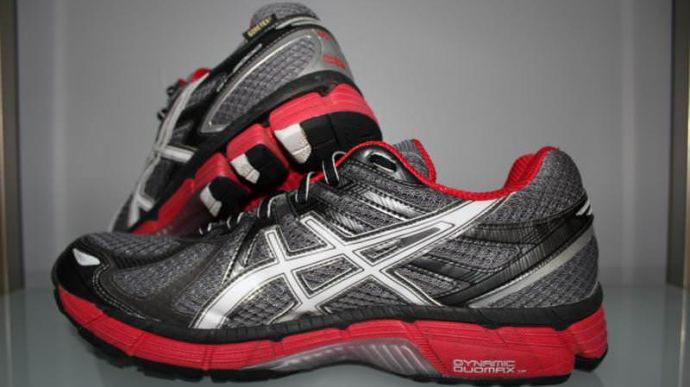 For 2013 Asics has decided to reboot their franchise GT series shoe and start again with modern design ideas while aiming to retain the fit and ride that thousands of runners have enjoyed for nearly two decades.

The GT series shoe has always had the over pronating runner in mind and Asics continues to cater the new GT 2000 line specifically for this group of runners. In the case of the GT 2000 GTX, Asics adds an all weather Gore Tex upper and an aggressive outsole lug pattern for running both on and off road in any weather condition.

The GT 2000 GTX is billed as a hybrid all purpose shoe but upon first glance it looks as though it’s designed exclusively for the trail.

The Gore Tex upper is rendered in gunmetal gray while the sole and interior sport a flame red coloring. The outsole is quite aggressively patterned with directional lugging to maintain grip in wet or muddy conditions. The shoe feels fairly low to the ground and moderately flexible at toe off but the upper feels very protective, dense and robust.

The fit is secure from the heel to the mid foot and the toe box sizes in a touch narrower than I usually prefer.

Asics takes the biggest risk in the GT 2000 series with the new midsole design. It is reminiscent of last year’s Kayano 18 midsole which I was not particularly impressed with in terms of stability.

As with the Kayano, Asics is now building the GT 2000 around its Dynamic Duomax midsole posting foam. Dynamic Duomax is located on the medial aspect of the shoe and begins near the heel and travels just past the arch. It serves to limit the inward roll of the foot and is supposed to be more responsive and less jarring than the older Duomax formula. The previous Space Trusstic mid foot shank is also replaced by a firmer and more torsionally resistant design that now comes up into the arch of the shoe to further shore up a problem area for over pronators.

Also present is Asics iconic GEL cushioning system which is located in the heel. Asics claims that this is the largest GEL pad ever engineered into the GT series but it appears thinner than the GEL design in the GT 2170 shoe I tested earlier this year. The rest of the midsole is comprised of SoLyte foam which is Asics premium cushioning foam.

In terms of height, the midsole now features a 10 mm heel to toe drop vs. the previous versions 11 mm drop. As mentioned earlier, the outsole is heavily lugged in an aggressive pattern comprised of durable carbon rubber under the big toe area and softer blown rubber laterally.

Asics special AHAR+ (Asics High Abrasion Resistant) carbon rubber is reserved for use in the heel where heavy wear can occur. Asics also decided to keep their Guidance Line design philosophy which carves a channel under the foot and helps to move the shoe through foot strike in a more natural manner.

The most prominent feature in the upper of the GT 2000 GTX is undoubtedly its use of Gore Tex material.

Gore Tex provides waterproofing capability and extends the envelope in which a shoe can operate and keep the runners foot dry. The GT 2000 GTX uses a rather traditional looking array of overlays that are both sewn on and welded in construction.

The heel and mid foot are supported by six sewn overlays while the toe box gets a split welded overlay both medially and laterally. As with most other Asics shoes, the Asics Tiger stripe doubles as a logo and an additional supportive overlay. Befitting an all weather shoe, the tongue of the GT 2000 GTX is gusseted to the upper to prevent trail debris and water from entering the shoe. The laces are the semi-flat style found on many modern running shoes. The upper is finished with Asics PHF (Personalized Heel Fit) memory foam and an OrthoLite style sockliner.

It’s always a gamble any time a manufacturer overhauls a popular shoe and I admit that I was immediately suspicious when I saw what appeared to be the Kayano 18 midsole on the GT 2000 GTX.

Fortunately, my fears were unfounded as I had some excellent running in the GTX. I think that the secret is in the new mid foot shank; it is supportive and truly beefs up the arch of the shoe. As a flexible arched over pronator I am keenly aware if a shoe is weak or too flat in the arch and the GTX is, thankfully, neither.

The shoe feels stable on and off road and reasonably cushioned and flexible. The midsole also felt lower in profile compared to previous versions.

I really only have two issues with the shoe; the toe box is narrower than I like and the shoe retains quite a bit of heat. Asics really needs to open up the toe box and allow for a bit more toe spread as I believe this allows a runners foot to be more naturally stable. I have had hot feet in most Asics shoes that I’ve tested but this one is like an oven! It could be due to the Gore Tex upper though I’ll have to wait until I get the road version of the GT 2000 to make a final verdict in this regard.

While it may be hot the Gore Tex upper works as advertised. I took the shoe through good weather on the road and trail but the true test came when I ran the GTX through town in a thunderstorm. On that run I hit every puddle I could find and the only time water entered the shoe was when I hit puddles deep enough to wash over the heel collar. My feet stayed remarkable dry and zero water entered from the toe box or mid foot. Not only were my feet dry but that storm was heavy enough to wash the trail dirt off the shoe and leave it nice and pretty for the photo shoot!

Sometimes things just line up right and the Asics 2000 GTX has become my go to shoe for the trail this winter.

We thank the nice people at Asics for sending us a pair of GT 2000 GTX to test. This did not influence the outcome of the review, written after running more than 50 miles in them.

Visit ShopZappos
Sorry - Product not found. Please try RunningWarehouse.Com to check in their assortment.
This page contains affiliate links. As an Amazon Associate I earn from qualifying purchases.
WHERE TO BUY
LOWEST PRICE
$71