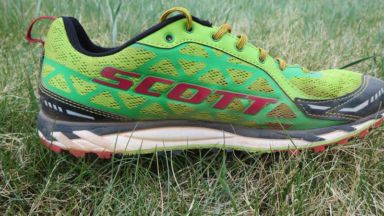 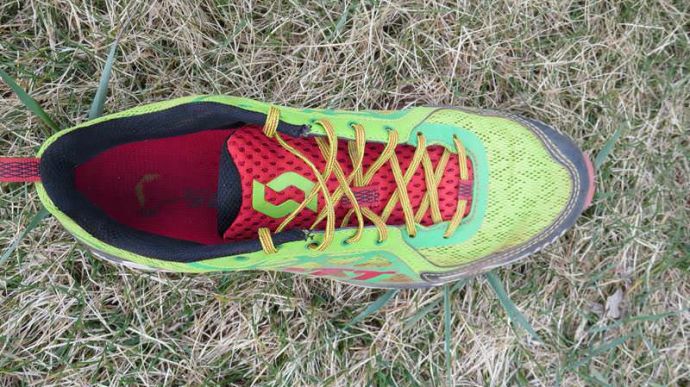 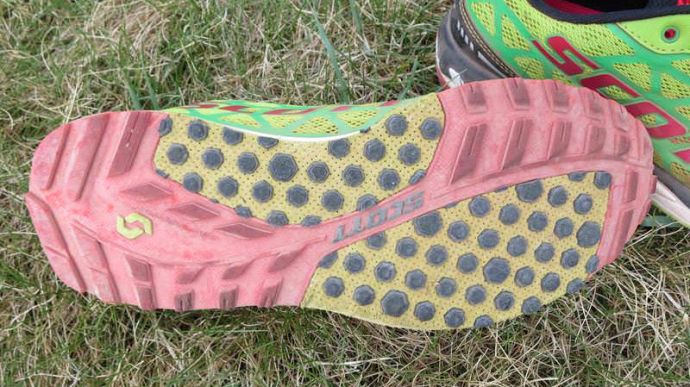 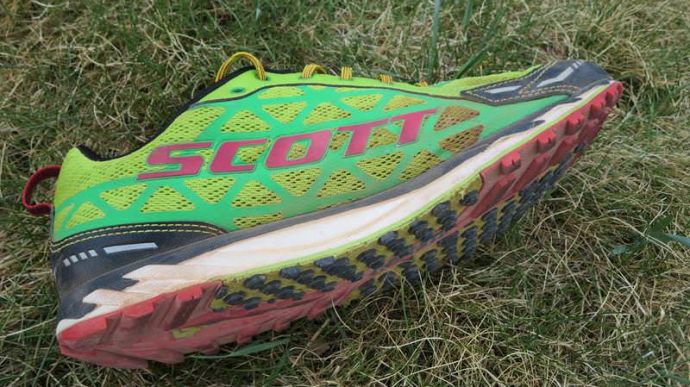 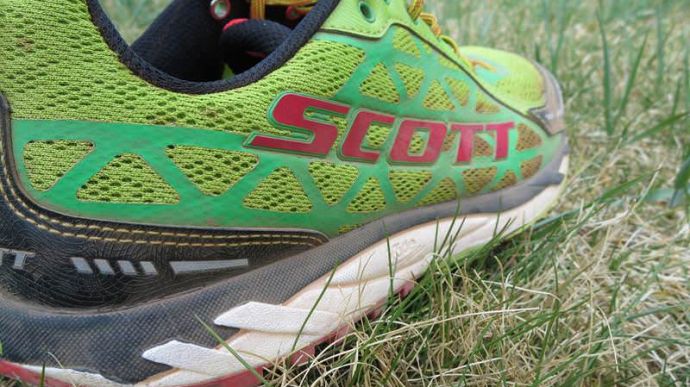 Having tried out the road racing version of this shoe over a year ago, I was expecting a similar fit and ride. My first chance to slip on the Trail Rocket yielded little consideration due to a somewhat ambiguous fit and what felt like a tapered toe box.

Scott uses durable sewn overlays throughout the Trail Rocket’s forefoot which functions as both a toe bumper and a safeguard against blowouts in the high wear areas of the medial and lateral forefoot. This seems in sharp contrast to the elegantly welded overlays throughout the rest of the shoe which only add a hint of structure to the breathable but impermeable dual density mesh.

Scott created a well padded heel collar but then left the tongue of the shoe completely floating, which lead to the tongue often going askew during runs and debris coming into the upper. This tongue issues also resulted in pressure from the laces being put directly atop the foot.

Scott’s eRide technology is a barely there rocketed midsole shape that makes for a fast transition on the run. I did feel that the lightweight of the shoe, combined with the low stack height and rockered shape lead to faster running at times, especially on smooth trails.

AeroFoam is Scott’s injected EVA foam and although fairly firm, it is surprisingly resilient. Due to the low lug height on the outsole the Trail Rocket runs smoothly on the roads yet the small and durable traction knobs also get great purchase on rocky terrain.

For such a minimally lugged trail shoe, the Trail Rocket’s outsole is one of the most effective at really grabbing terrain on technical downhills. The Trail Rocket does not have a rock plate, but it really isn’t needed given the firmness of the Aerofoam.

I appreciated the Trail Rocket the longer I ran in the shoe, but the toe box continued to be a problem for my fairly moderately wide forefoot. On longer outings, when my feet tend to swell just a bit, the heavy overlays on the toe box felt confining, and on downhills my foot felt crammed into the front of the shoe due to heel slipping.

To combat this tendency, I laced up the very back (heel lock) eyelets which left me with barely enough lace to get the shoes tied. Minor design flaw but annoying enough.

Scott nailed the platform, midsole, and outsole on this shoe which leaves me excited for a second version. In all of my years fitting shoes on runners, I’ve yet to encounter a foot which was wide in the mid-foot and then tapered throughout the toes.

I have no idea how shoe companies (Scott is not alone in this) end up with these designs in the upper which are likely based more on fashion than function. A redesigned upper would place the Trail Rocket as a top contender in the lightweight trail racing category due to the excellent transition and lightweight protection.

The Trail Rocket will be a must try for narrow footed runners looking for a minimal feeling shoe with adequate protection for the ultra distances.

We thank the nice people at Scott for sending us a pair of Trail Rocket to test. This did not influence the outcome of the review, written after running more than 50 miles in them.