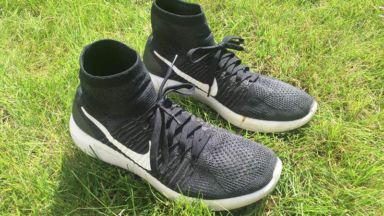 The Nike LunarEpic is so called because it combines two of Nike’s latest, greatest and costliest high tech features, a Flyknit upper and Lunarlon sole unit.

Being a fan of both technologies, which in no other shoe can be found together, I was stoked for this Epic union.

Had Nike left the epic-ness below the ankle I have no doubt these would’ve been amongst the few incredible shoes I review that stay in my daily rotation once the reviews are said and done.

Unfortunately Nike stretched the Epic up as far as they could, above the ankle in fact, which lead to constant blistering on my Achilles, making them basically unwearable for running.
WHERE TO BUY
LOWEST PRICE
$175
SHOE INFO
Nike
Brand
LunarEpic Flyknit
Model
Lightweight
Type
7.80 oz. (221 gr.)
Weight
175 US$
MSRP
10 mm
Heel Drop
WHO IS IT FOR
Someone who wants the latest and greatest in everything that Nike has to offer while thinking high-top running shoes are a must have.
Help me choose

Straight from them being called the LunarEpics its obvious how Nike positions these shoes, they are the absolute top of the line.

Nike combined the Lunarlon sole unit, which is used in the LunarGlide 8 and LunarEpic Low, with a high-top version of the Flyknit uppers found throughout Nikes model line.

Waiting for these was an anxious process, these are the absolute most expensive high end Mecca of technology shoes Nike has in their massive lineup of running shoes.

Based on that along with the fact that some of my all-time favorite shoes had used Flyknit uppers or Lunarlon midsoles I had incredibly high expectations for these shoes.

When they finally arrived the Flyknit upper seemed less stretchy and sock-like than in previous Fly-knit shoes I’d had.

Also surprising was that the swooshes were glued or fused on over the upper instead of being part of the woven design as in other Flyknit shoes.

A nicer little surprise is that they come with two sets of insoles, 4mm and 6mm thicknesses, to allow for greater personalization.

The sole unit is Nike’s Lunarlon foam through and through, 100% foam. That’s right, Nike didn’t bother putting the four or so tiny patches of rubber they normally through on their mostly foam models, namely the Frees.

Heads up – it really doesn’t make a difference – traction seems on par with any pair of Nike Frees I’ve had, which is to say its not great but for a daily trainer its more than adequate.

Of note is that the laser sipings – basically all the little grooves that make the shoe flexible – suck up stones like nobody’s business. It’s not really a big deal for me but I know some people may be sensitive to that.

Moving on to how they feel midsole wise. This, in my opinion, is where these shoes really shine.

Nikes Lunarlon midsole has been a mainstay in the highest league of foam materials used for midsole comfort, the only other ones about as good I’ve experienced being Adidas’s Boost and Saucony’s Powergrid Plus from the ISO line.

The laser siping I touched on earlier is present throughout the five “landing pads”, the areas that make contact with the ground, and the sides.

I’m not sure how much of the flexibility comes from the sipping versus from simply the foam itself, but the overall effect is a softer feeling shoe that envelops your foot as you land and flexes well with it.

This soft, cushioned ride is incredibly welcome for a daily trainer but was a bit too squishy for some of my faster paced workouts.

The upper of this shoe was a vast departure from the Flyknit found in shoes like the Free Flyknits. Those had what can best be described as a stretchy woven sock for an upper.

These on the other hand only had that traditional stretchy Flyknit on the tongue and ankle collar sections. The rest of the Flyknit was woven out of much thicker threads that didn’t have any stretchiness.

This lead to them feeling like they had a traditional shoe type upper but lighter and more breathable. While this was still better than the upper on the vast majority of pairs of running shoes, it was somewhat of a letdown compared the incredible uppers Nike uses on the Free Flyknits.

Now to the only thing that really ruined the shoes for me. The ankle collar. Look at the straight side view picture I took. Do you see how much that stretchy collar juts in right over where the heel cup ends?

Now look at the back. Do you see that stitched on overlay along the back that has the LUNAREPIC branding running down it? Find the point where that overlay intersects the collar where it juts in.

That point matches pretty perfectly with the sections on the back of my heel that have been consistently blistering and loosing skin, even while wearing nearly knee-high compression socks.

This was so bad that I never even ran further than 5 or so miles at a time in these shoes, and never ran in them back to back days in them. Having a shoe I couldn’t regularly run in defeated the purpose of them being daily trainer.

I could leave my conclusion at that. Everything below the ankle on these shoes was, honestly wonderful. This whole review all I wanted was these shoes without the darn ankle section.

That’s what the LunarEpic Lows seem to be. Without even having had the chance to try them I’d assume they’d easily be in the 4 star range based on my experience with the LunarEpics.

We thank the nice people at Nike for sending us a pair of LunarEpic Flyknit to test. This did not influence the outcome of the review, written after running more than 50 miles in them.