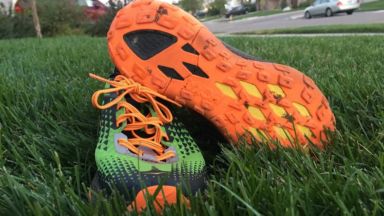 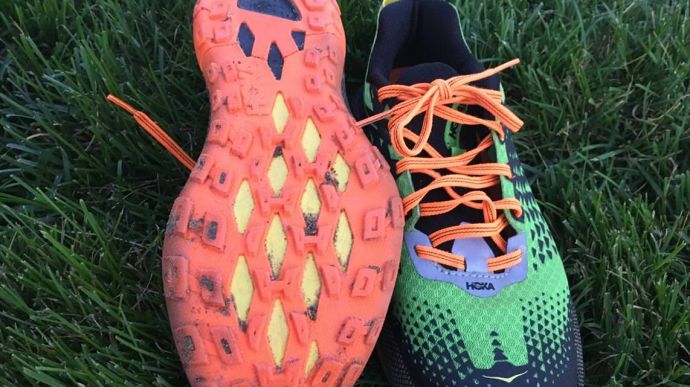 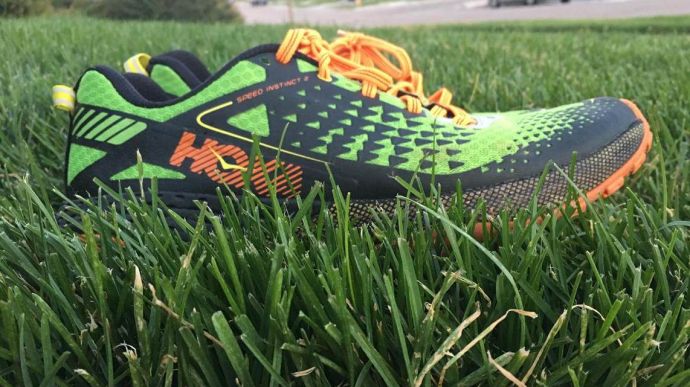 The Hoka Speed Instinct 2 is a lightweight neutral shoe that performs fairly well on runs of all types and distances. The shoe performed well on asphalt, treadmills and trails.

The shoe performed well on lose gravel as well. One drawback in my eyes is the overall cost of the shoe. $130 for the Hoka Speed Instinct 2 is a turn off for me as there are many other shoes out there that perform just as well for less.

The shoe does mold to the foot which creates a decent fit which I would categorize as snug but not tight…especially in the forefoot. So, wear thin socks. As you will notice from the pictures the material that surrounds the out and mid sole is covered with a tough mesh material.

I purposefully scrapped this against rocks and it did not budge. It is tough and durable; which provides an extra layer of outer sole protection.
WHERE TO BUY
LOWEST PRICE
$130
SHOE INFO
Hoka One One
Brand
Speed Instinct 2
Model
Trail
Type
9.60 oz. (272 gr.)
Weight
130 US$
MSRP
3 mm
Heel Drop
Speed Instinct
Previous model
WHO IS IT FOR
Runners looking for a lightweight shoe with amazing traction that can go from road to trail.
Help me choose

With that said, this was the first pair of Hoka’s that I have tested; so, the intricacies of any minimal changes would not be noticed nor able to be adequately reviewed here.

To top it all is a more refined upper with an adaptive fit, a more breathable mesh pattern and more support for the mid-foot.

The SPEED INSTINCT 2 is a trail racer, responsive enough to race up the mountains and forgiving enough to fly down them.” In my opinion, I would have to thoroughly agree with that sentiment.

The carry over of the PRO2Lite technology does in fact give the shoe an edge on its competitors in the light that the relationship between the weight of the shoe and the cushioning combined team up to give a runner one comfortable and supported run.

Hoka One One Speed Instinct 2 – Lateral side

Hoka presents a show with stability and comfort. The shoe boasts stability and delivers. The shoe delivers a Firm external heel counter for additional support that keeps the back of the foot locked in place.

Hoka One One Speed Instinct 2 – Lateral side

When I took the shoes out of the box and tried them on for the first time I was stuck by the fact that the cushioning felt unreal. This shoe provides ample cushioning from the heel to the toe.

However, the shoe overall does not lose its minimalist feel. The comfort of the shoe left my feet feeling refreshed after runs.

Most of the runs that I took this shoe on were under 5 miles due to the fact that I sustained an over use injury in this test cycle.

On the first run I took them on a local train and fond that the stability on the lose terrain was perfect with these shoes. In fact, I found that the terrain was not an issue at all.

The shoes tread provided a great amount of traction and the outer material allowed my feet to breath. The only drawback I found with these shoes to be snug in the forefoot.

Hoka One One Speed Instinct 2 – Toe

But the silver lining to the snugness is the fact that when laced up…your foot is secure and does not move while on the run.

The Speed Instinct 2 continued to use the Pro2Lite cushioning. I found this cushioning to be soft yet stable, responsive yet firm when it was needed.

Meaning that you could run this shoe over larger gravel or rocks and not feel them in your foot. The softness of the heel gave me the feel of a comfortable neutral shoe with the feel of a minimalist trainer.

Hoka One One Speed Instinct 2 – Sole

The continued use of the carbon rubber combined with the traction that looks like it could be used for a monster truck tire made the shoe capable of handling any terrain. With that said, these shoes can be used on the road, sidewalk or on asphalt.

But as always with this type of material on any shoe…beware of the water. With that said, I ran in these shoes several times without socks due to the snugness of the shoe and the upper never caused any type of rubbing or blistering.

This I accredited to overall fit of the shoe. In addition to the upper, the tongue of the shoe needed no special adjustments and the laces stayed tied on longer runs.

That fact may confuse some as to why would laces staying tied be so important but if you have ever been in the groove and had to stop to retie your shoes…then you know exactly what I mean.

The Hoka Speed Instinct 2 runs true to size. The shoe provides ample support and when you lace up, your foot isn’t going anywhere. I did not encounter any issues with slippage, rubbing or blistering.

Hoka One One Speed Instinct 2 Conclusions

After putting in 60 miles on the shoes one of my biggest surprises was how durable the shoes are. The stood up to scrapes and still feel like new on my feet.

Hoka One One Speed Instinct 2 – Pair

The good news about that is that for the price a runner can log some serious miles on these shoes. In my opinion is that these are well made shoes that will hold up to the abuse that comes with 500 plus miles.

While the shoes did take some getting used to in the area of the gait, they offered good cushion, midsole support and support in the forefoot in a lightweight shoe that is not very common in shoes today.

With that said, you are going to have to dig into your pockets in order to obtain a pair of the Hoka Speed Instinct 2. At MSRP of 130 dollars.

We purchased a pair of Hoka Speed Instinct 2 to test at runningwarehouse paying with our own money. This did not influence the outcome of the review, written after running more than 50 miles in them.

Similar shoes to Hoka One One Speed Instinct 2

Hoka One One Speed Instinct 2 Review