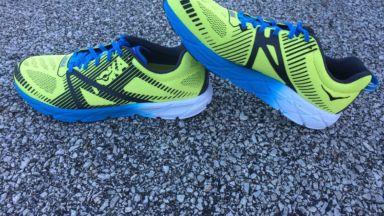 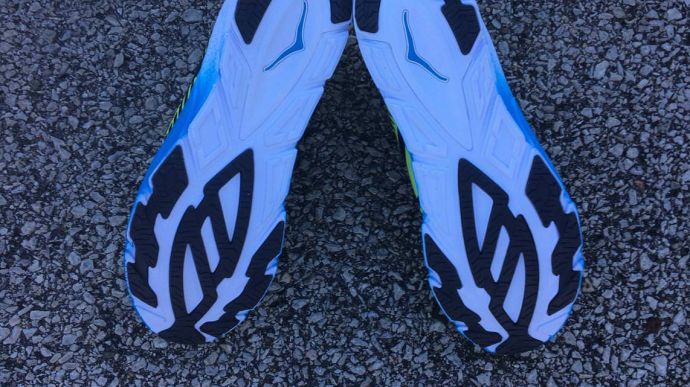 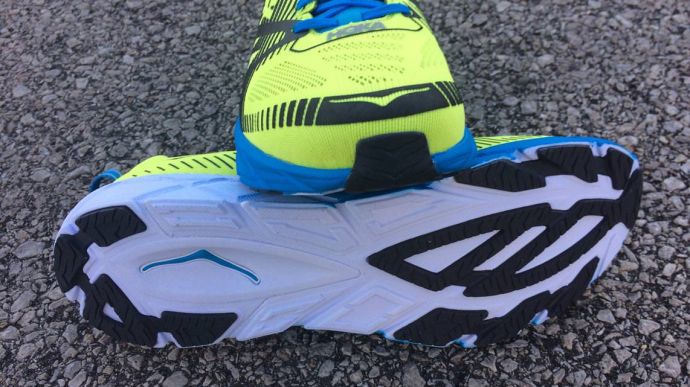 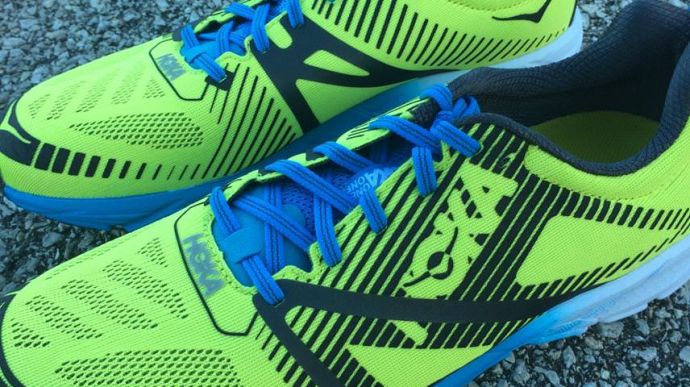 The Hoka One One Tracer 2 offers runners a lightweight, responsive and fast shoe. Best as a training shoe, but also fine for racing up to the marathon distance, the Tracer 2 is excellent for longer workouts.

The shoes are more expensive than others in this category but the combination of excellent cushioning and lightness are hard to beat.
WHERE TO BUY
LOWEST PRICE
$130
SHOE INFO
Hoka One One
Brand
One One Tracer 2
Model
Racing
Type
7.60 oz. (215 gr.)
Weight
130 US$
MSRP
4 mm
Heel Drop
WHO IS IT FOR
The Tracer 2 can be used for anyone looking for a well-cushioned but responsive shoe for training or race distances from 5K to full marathons.
Help me choose

OK, I admit it. I had never bought into the Hoka hype. I’ve embraced minimalist shoes and strongly prefer those with a drop around 4 to 6 mm.

But all the cushioning Hoka stuffs in the oversized midsole was a turnoff for me. Still, I was curious about the Hoka Tracer 2s.

Hoka One One Tracer 2 General Info

The Tracers (24 mm heel, 20 mm forefoot) are indeed a well-cushioned shoe. But more noteworthy is that they are fast, nimble and responsive.

In the 50-plus miles I have tested the Hokas, I found them to take on hills well but also give me the ability to push off and accelerate when doing standard speedwork drills.

Hoka One One Tracer 2 – Lateral Side

Hoka proclaims that the Tracer 2 is its lightest road shoe. They are extremely light for all the cushioning — 7.6 ounces for men and 6.7 ounces for women.

Hoka made only minor modifications to the new Tracer. It features the same drop, at 4 mm, as the original. One difference between the men’s and women’s versions are a 1 mm higher stack on the men’s heel.

Hoka made a functional addition, including a small strap at the heel to help runners put on or take off the shoe.

Hoka One One Tracer 2 – Heel

During my first couple of runs in the Hokas, I felt an annoying irritation near where the tongue meets the upper on the right shoe.

There was pressure jabbing into my foot in that area. I paused to readjust the shoes each time, which fixed the issue.

It didn’t last longer than my first few runs and I never figured out whether it was something with the shoe’s design or perhaps my unique bone structure.

Other than that minor irritation, the shoes are very comfortable — so much so in fact that I am currently wearing them back from a long business trip.

Hoka One One Tracer 2 Sole Unit

When wearing the Hokas, there is a certain likeness to wearing socks or sandals, rather than responsive running shoes.

In this version, Hoka kept the PRO2Lite dual density midsole that offers superior cushioning in the heel and ensures proper responsiveness in the forefoot.

Hoka One One Tracer 2 – Medial Side

The Pro2Lite technology gives runners confidence and support when propelling forward, whether during track workouts or ascending hills.

Hoka employs resilient cushioning in the midsole with its early stage Meta-Rocker Geometry, which is designed to empower runners to keep and maintain proper running mechanics, even during long runs.

Though I would not try any trails with even the hint of mild technical terrain.

Hoka One One Tracer 2 – Inside

Hoka One One Tracer 2 Upper Info

The original Tracer was well received by runners, although some pointed out issues with the upper and said that the fit, specifically in the toe box, required improvement.

The upper incorporates an open design with a more adaptive forefoot and engineered mesh that allows for adequate ventilation.

The addition of a 3D puff print frame produces a lightweight yet supportive foot wrap, meaning the shoe should keep your feet locked in place regardless of how quickly you run.

The shoes allow for proper ventilation, allowing the foot to breathe — and cool — even when the summer temperatures reached into the 90s.

Hoka One One Tracer 2 Conclusions

Hoka One One Tracer 2 – sole

Still, as a Hoka newbie I am impressed with the technology that combines for a lightweight trainer with plenty of cushion.

I probably won’t wear these for any upcoming races in which I am trying to PR, just because I have not had enough experience with them yet. However, I will definitely be using them throughout my training.

In fact, my experience with the Hoka Tracer 2s has elevated my curiosity about the options Hoka offers for trail running shoes. OK, Hoka, you’ve made me an interested believer in your performance and technology.

We purchased a pair of Hoka Tracer 2 from runningwarehouse with our own money. This did not influence the outcome of the review, written after running more than 50 miles in them.

Hoka One One Tracer 2 Review