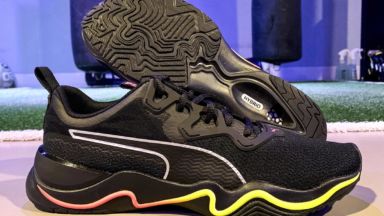 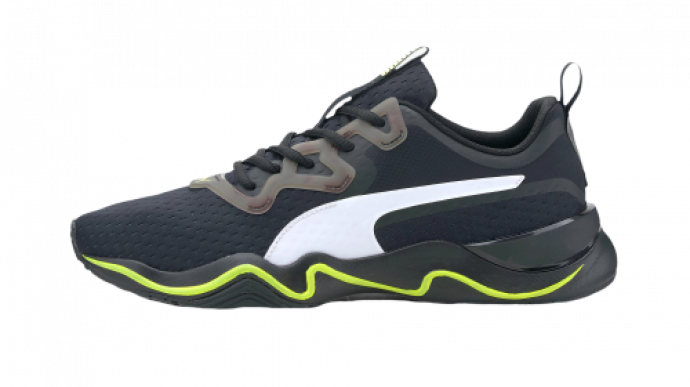 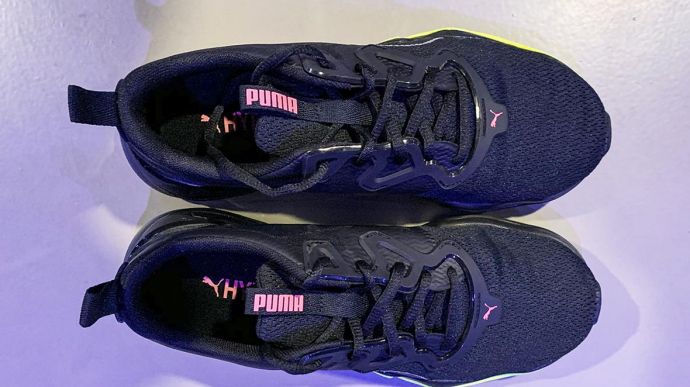 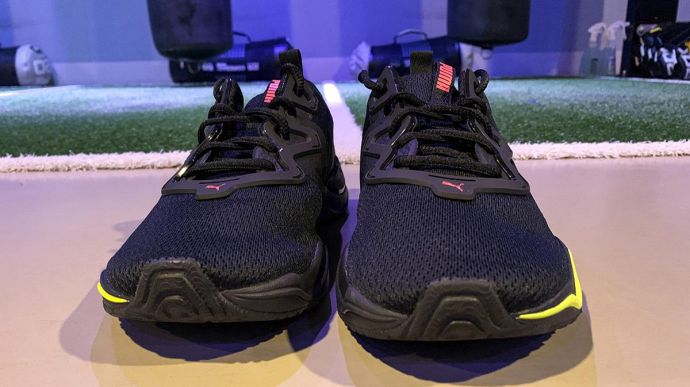 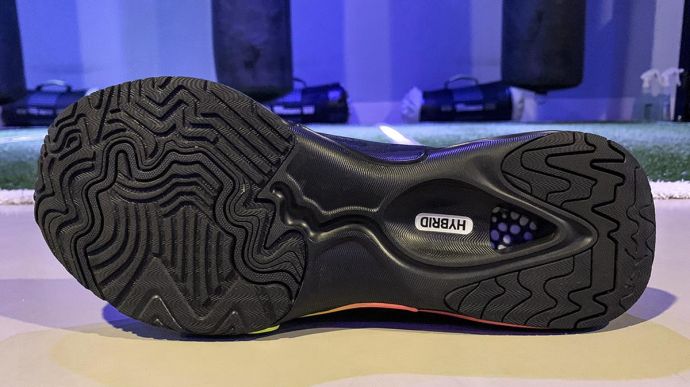 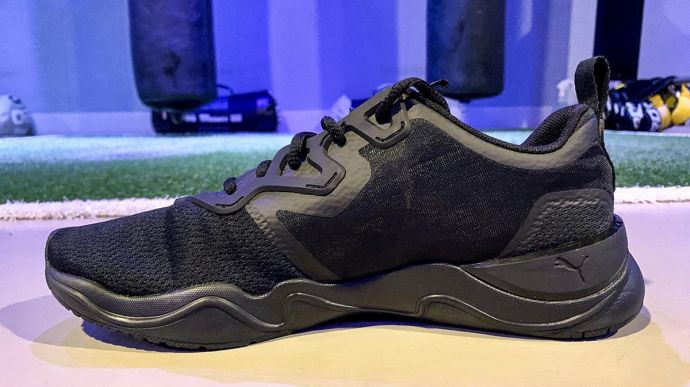 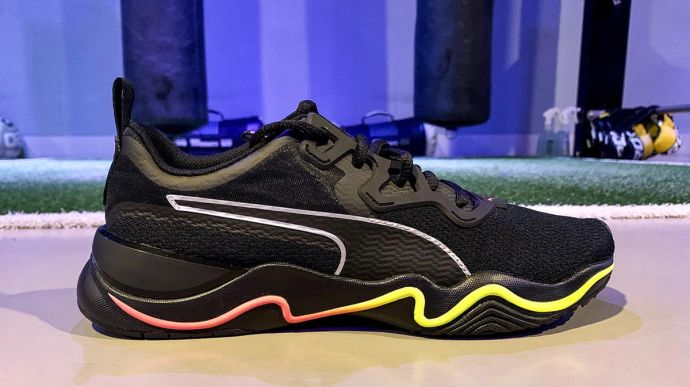 The Puma Zone XT is a good HIIT training shoe that provides adequate performance across a range of activities encountered in a HIIT indoor gym class.

It's not the top performer on the market, but will do its a job, and is a welcome addition to your kit bag if you're currently training in a running shoe.
WHERE TO BUY
LOWEST PRICE
$44
SHOE INFO
Puma
Brand
Zone XT
Model
Training
Type
10 oz. (283 gr.)
Weight
80 US$
MSRP
10 mm
Heel Drop
WHO IS IT FOR
The Zone XT is a new type of training shoe from Puma, designed for high intensity interval training (HIIT) type exercise.

It’s aimed predominantly at gym go-ers taking part in indoor classes, who want a lightweight but purpose designed shoe to look the part in a boutique fitness class.
Help me choose

The Zone XT is a new range from Puma aiming to fill the gap in the market for HIIT enthusiasts, providing them with the perfect hybrid of all types of training shoe.

This ideal shoe would provide support when lifting weights, cushioning on short runs, and stability when it comes to quick changes in direction during explosive speed work.

I tested through a variety of activities and it performed, although not as spectacularly as its competitors from other brands.

My first impressions of the Zone XT when unboxing was that the shoe didn’t look as good as I’d hoped.

The upper appeared quite flimsy and I was worried about the durability of the upper, the sole and especially the lines where these units joined.

When trying them on the upper around the back of the foot foot felt rough, quite uncomfortable, and there was little padding. Where there was padding this felt poor quality and compressed very easily.

Due to the upper being so thin, every movement of the toes could be seen, and gave the shoe an odd shape at the front.

The sole had a plastic-y look and feel, which looked better from a distance.

Where I was impressed was with how lightweight they felt, perhaps due to the lack of technology and structure vs competitor training shoes. Overall, a little disappointing at first.

The sole of the Zone XT is made of a hybrid of foams which aims to provide the solution of being a good all rounder, performing in all the tasks that the wearer will throw at it.

This foam is a combination of NRGY beads which aim to provide cushioning and Ignite foam to give responsiveness and energy return when and where required.

The NRGY beads are visible under the heel of the sole in a small section, for added comfort when running and landing heel first.

For me the shoe felt more on the stable, solid side, with little cushioning, which was great when lifting weight and for bodyweight exercises, but felt very hard under foot when running for longer than a few minutes.

The insole is made of a singular material and depth spongy foam, which gives some comfort under foot, but flattens easily in areas where there is more weight (ball of the foot and heel).

This insole falls out quite easily when taking the shoe off, and also moves around a fair bit, scrunching up in areas which gets annoying.

The sole features a heartbeat design, a nod to the fact these shoes should be worn during activities which raise your heartbeat the most. This is colored in on the outside of the shoe and left blank on the inside.

There have already been new colorways launched since the initial shoe launch, and cover a variety of styles to suit all tastes, from bright multicolors to neon pink, to monochrome, and they look great with leisure wear and also outside of the gym.

On the bottom of the shoe, the outsole has a thin layer of grip, with grooves to enhance the flexibility of the sole.

This gave good grip indoors, but felt like it wouldn’t last so long if worn for outdoor activities, due to the thin depth.

The Zone XT features a knitted upper, which feels very light, and is one of the most breathable shoes I’ve ever worn. Walking to the gym on a cold day, my feet were freezing, but stayed comfortably cool during workouts.

As the shoe is designed for indoor classes, this isn’t an issue unless you decide to take it outside.

The Puma logo overlay is made of a plastic to give slightly more durability on the outside of the shoe, and cover up where the seam between the forefoot and the mesh on the heel.

On the lateral side there is also this enhanced mesh to give the shoe more structure and durability. This is the only design on the lateral part of the shoe, its very plan other than that, and in comparison to the outside.

The heel cup is spacious, average depth and structured. On the first wear this felt rough around the ankle and rubbed slightly, I wore trainer socks with this shoe, and the shoe always came up higher than them.

Great if you don’t want your socks to show but not so great if your socks protect your feet from rubbing. This became less of an issue over time and didn’t discourage me from wearing them.

The fit was true to size, and there were no pinch points at all, which was mainly down to unstructured thin upper. I could go half a size down and still have room for my toes to move around.

The loop on the tongue and heel made getting them on and off easy (except for the insole moving around) and the laces stayed put.

The plastic TPU caging system, also used in Puma running shoes means the laces are wideset, and lock the feet in well.

To conclude, it took me a while to make my mind up on this shoe. First impressions weren’t too good, but it then went on to perform OK in testing and for a low price training shoe it did the job.

More detail on the various activities we put it through below…

The shoe doesn’t claim to be a running shoe, but performed surprisingly well on short runs, especially fast treadmills sprints due to its lightweight components.

It didn’t feel cushioned or particularly stable, but did the job it said it would, and performed in this type of workout.

I wouldn’t recommend wearing these for runs longer than 1km at a time, and if you plan on running regularly I’d definitely recommend a specialist running shoe.

My feet moved around in these too much for my liking when lifting heavy weights, e.g. squats or deadlifts, but if you are just starting out lifting weights.

The Zone XT offers a much better experience than wearing a traditional running shoe, due to the low heel drop, and firm foam under foot.

Box jumps didn’t feel especially explosive, and my foot moved around quite a lot during burpees. As an all rounder, they were better than wearing a running shoe here too.

The Zone XT performed OK in all areas of testing for high intensity interval training, I just didn’t love the shoe.

It was lacking in the technology of more advanced models such as Nike Metcon 5 or Reebok Nano 9, and you can tell by looking and feeling that it is obviously cheaper than these.

Other brands have also benefitted from being in the ‘training shoe’ game for longer, and new launches have improved on, from previous customer feedback which the Zone XT hasn’t had the chance to do.

However, if you want a lower priced shoe, that you’ll only wear for indoor gym classes, the Puma Zone XT isn’t a bad choice. If you’re looking to do more weightlifting, or more running then I’d spend my money elsewhere.

We purchased a pair of Puma Zone XT at retail using our own money. This did not influence the outcome of this review, written after training for a month in them.

Visit ShopAmazon.com
This page contains affiliate links. As an Amazon Associate I earn from qualifying purchases.
WHERE TO BUY
LOWEST PRICE
$44