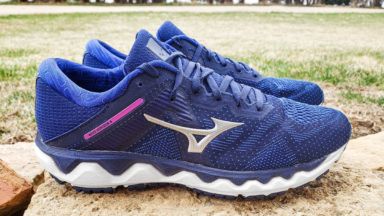 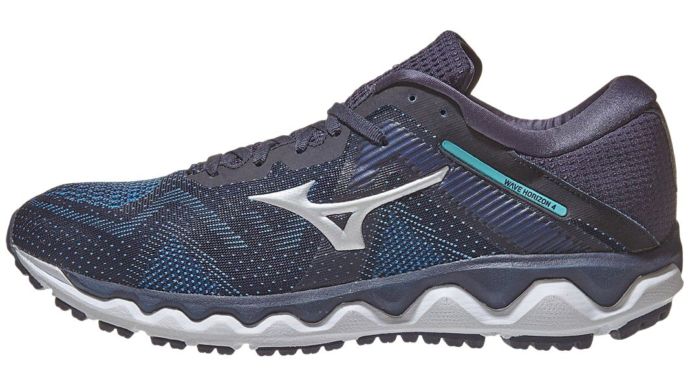 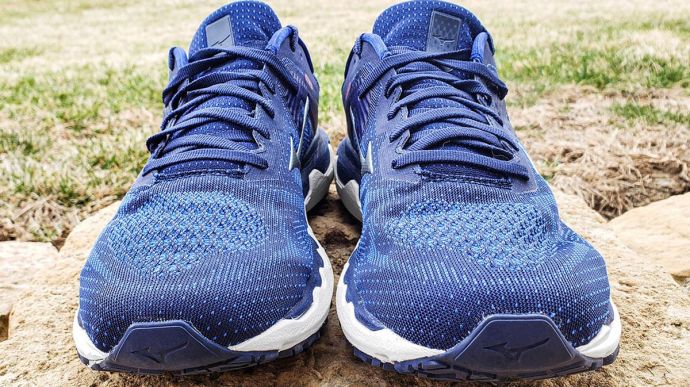 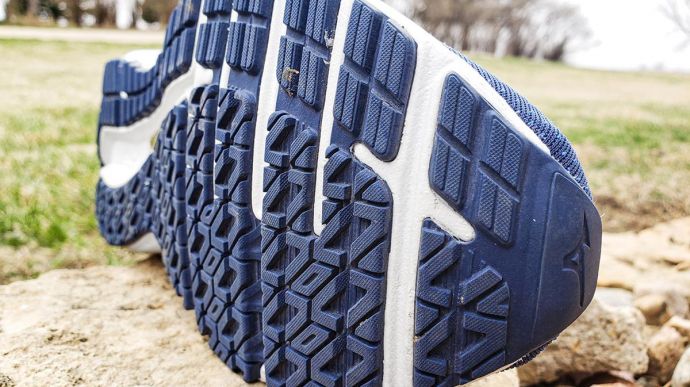 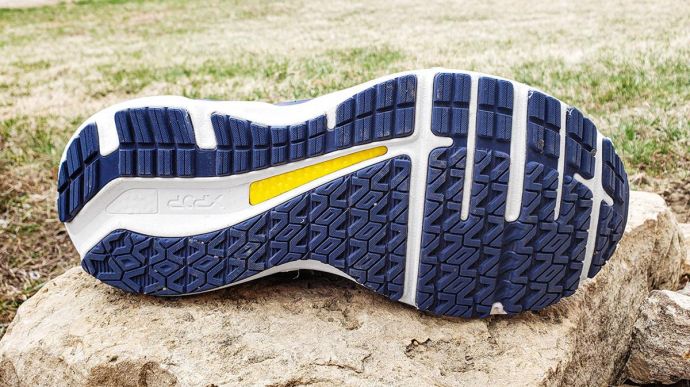 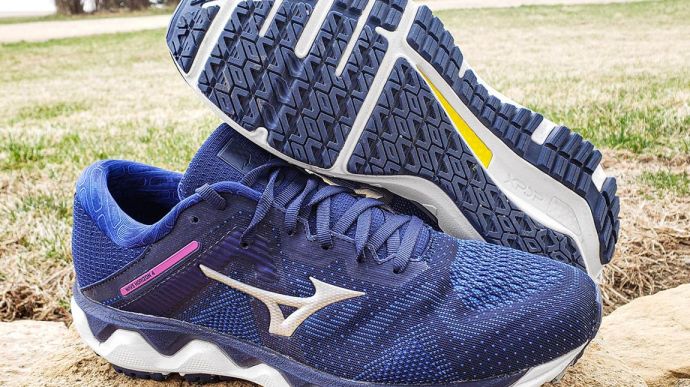 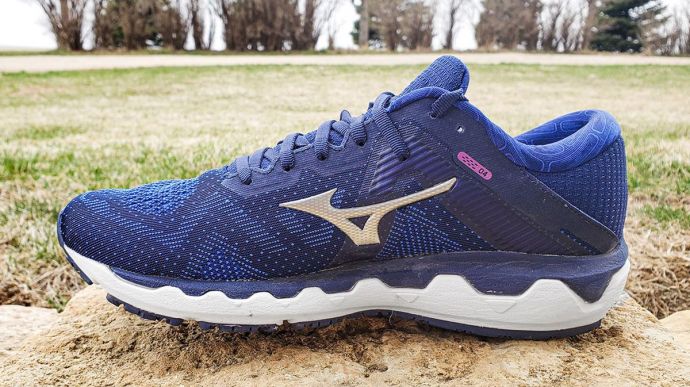 Mizuno Wave Horizon 4 is completely redone for a simpler, sleeker shoe that offers a secure fit with support and flexibility right where I need them.

This innovative design makes waves toward stability with strategically contoured foam layers in the midsole, without sacrificing the durability this line is known for.
WHERE TO BUY
LOWEST PRICE
$160
SHOE INFO
Mizuno
Brand
Wave Horizon 4
Model
Stability
Type
10.7 oz. (303 gr.)
Weight
160 US$
MSRP
10 mm
Heel Drop
Wave Horizon 3
Previous model
WHO IS IT FOR
Wear this shoe for long runs or as an all-around trainer if you like a close-fitting upper and want the feel of an old-school stability shoe without the unnecessary bulk.

Look into this one if you want a touch of pillowy cushion - not so much you're riding high but enough to take the edge off - and want unwavering support for miles.
Help me choose

Wave Horizon is the brand’s most cushioned stability shoe. This year’s design shaves over an ounce off Horizon 3, which puts the 4 in a better place to compete with ASICS GT-2000 and Brooks Adrenaline.

Officially Horizon’s drop height is 10mm., but Runner’s World testers measured 14 mm. for the men’s and 9 mm. for the women’s models. It felt like 9-10mm. in my own testing.

With such a high offset measured for at least one men’s shoe, let us know in the comments what it feels like to you, if you’re a man running in these.

The Wave Horizon maintains the “wave” appearance yet lacks the wave plate that originally gave it its name, now utilizing strategic geometry in layered foam to achieve cushion with stability where its needed.

This change was first phased in with the brand’s neutral shoe Mizuno Wave Sky Waveknit 3 in June of 2019. I give the revamped design two thumbs up.

The midfoot holds strong like I need it, but in the forefoot the sole bends with my foot; it doesn’t feel “stiff.”

After my run yesterday I bent the shoe in half and found that it was more pliable than in “cold” testing. Those who want a strictly straight midfoot are not going to find it here.

Running in Wave Horizon 4 and GT-2000 7, one on each foot, the shoes feel so very similar, but I can tell they’re different shoes.

Here’s why: the upper of GT-2000 is just a touch more comfortable—the ASICS upper fit is a long-time favorite of mine—and Horizon’s sole, particularly in the medial toe, feels more steady.

These are slight differences, mind you; they’re both basic, stable shoes with a low volume fit.

If I was leaving for a trip and could only bring GT-2000 or Wave Horizon for running and casual, I would choose GT-2000 (touch more comfortable).

If choosing one for a 15 mile run, I’d go with the Mizuno (slightly more stable)… but it’s also .4 oz. heavier.

Bottom line, Horizon is $40 more list price, and I don’t find it to be $40 better for a runner who regularly runs less than 10 miles at a time.

The increased technology in this shoe comes out in extended cushion with the XPOP internal layer, and cloth “anchors” for the tongue inside the shoe, for those who have problems with the tongue shifting in some shoes.

I could go with my regular size in Wave Horizon (barely, but it works with thin socks) as I do with the similar-fitting ASICS shoes.

The uncompromising width at the ball of the foot in Brooks models means I have to go up a half size. I appreciate a low-volume fit that hugs the heel and has just enough give to accommodate a moderately wider forefoot.

Other similar shoes include ASICS Gel-Kayano, Hoka One One Gaviota, and Saucony Hurricane.

The first thing I wrote to Ruggero, the guru of all shoe gurus, is that Wave Horizon 4 “fits perfectly, much better toe box than its debut that I ran in four years ago.”

(Already? Don’t blink or thousands of miles will go by unsavored.) I stand by that statement for the most part, but I reevaluated soon after writing.

I went on my first run, a seven mile tempo run: so far so good. Then I wore them around the house all day and noticed that the outside edge of my forefoot had a dull ache.

Uh oh, do I need to send these back for a half size bigger? I didn’t want to do that and then deal with the same issue I had in Ravenna 11, which was movement in the heel to get the right size for the ball of my foot.

The shoe reminds me so much of ASICS GT-2000 7, that I decided to wear one of each around for a few days. I noticed that they felt extremely similar.

It looks like I have to keep the laces looser in the Mizuno, but that’s simply due to the shoe’s construction as the laces are placed a few millimeters further apart by design, than the ASICS.

Dilemma solved! I stuck with my normal size.

Mizuno has relaxed the forefoot fit just slightly since the difficulty I had in the first version, and after a short 20-25 mile break-in period, I had no fit problems for the next 125 miles.

Mizuno threw out the old midsole materials and outsole design, but Wave Horizon’s spirit lives on in appearance and functional new layers.

Since the plastic plate is no longer there to hold the midfoot steady, the sole unit is updated from its formerly segmented design to a continuous piece of double-layer foam, with a center filling of XPOP polyurethane (PU) in the top layer.

A guidance line runs from mid heel to lateral midfoot, where the cushiony-soft center of fused TPU pellets that make up XPOP foam, peaks through the center of the base. Note: that XPOP center looks a lot like adidas Boost.

Instead of a traditional dense metal post, the Mizuno team’s wave design is curved on the lateral side for a softer feel and rectangular on the medial aspect.

The geometry is designed so that the instep compresses less than the outside of the shoe, to even the wear for overpronators.

I especially notice the stable feel of this sole design in the toe-off. This is where my foot turns in too far, and it feels like the sole is holding firm beneath the pressure, sort of a push back against the excess foot motion.

My podiatrist told me that in over 40 years of working with runners, it is most typical for people to strike midfoot and roll back (ideally), or, to strike on the outside heel, and then roll inward to some degree throughout footplant.

His point is that excess stability features are not needed in the medial heel. In this case, Mizuno has taken a step in the right direction.

The weight keeps this shoe from providing the “floating” experience claimed. The cushion is ok (like ASICS); it’s not exceptional (like a thin layer of Boost, imo).

The carbon rubber outsole is highly durable and interspersed with flex lines near the ball of the foot. Looking at the wear on my shoe after 150 miles, there’s a lot of life left.

The high price for this shoe is justified by long-time wearability, and the heavier weight of a carbon rubber outsole has the flip side of a long-lasting shoe.

Continuing the overhaul of the Horizon, Mizuno grabs the eye with an intricate design pattern in its engineered mesh upper, for a subtle yet stylish flair.

The mesh has a bit of give to it, which helps the fit to modify to your particular foot shape during a short (20-25 mile) break-in period.

I liked the fit more as the miles added up with this shoe. After a couple runs with thicker socks, the fit opened up to be comfortably snug when wearing thin socks.

The average-thickness tongue attaches to the upper with a thin cloth inside the shoe; standard lacing holes and shoe strings tie it up, with a slightly wider than average spread between the hole strips.

This is a moderately breathable shoe.

The solid strength of an excellent heel counter and moderately plush fit of the heel is exactly like the GT-2000 7’s. This is my favorite part of the shoe.

It hugs my midfoot and offers just enough give at the ball, with a low-volume forefoot. A cushy sock liner speaks to the higher price of the shoe; it’s a nice touch.

Fit is true to size if you like a snug shoe; you’ll want to try a half-size up if you want more room for your toes.

A reflective strip along the heel of the shoe catches the eye in low light.

“Old Reliable” is the term that comes to mind for this shoe.

At first it seemed pretty basic, but as the miles wore on, I appreciated the durability of the XPOP layer in the midsole and the extended comfort that it added to long runs.

Wave Horizon grew on me. It looks like an old-school shoe and maintains staples such as a sold heel counter and durable outsole, but it’s fitted with the brand’s latest research in midsole geometry.

It’s not big and flashy—literally, it’s a medium stack height with a close-fitting upper that comes in low-key colors—but it packs a lot of research into its design and includes a hidden, resilient layer of cushion inside of its midsole.

We purchased a pair of Mizuno Wave Horizon 4 from runningwarehouse using our own money. This did not influence the outcome of this review, written after running more than 50 miles in them.