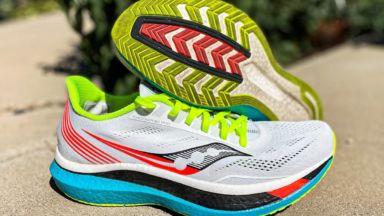 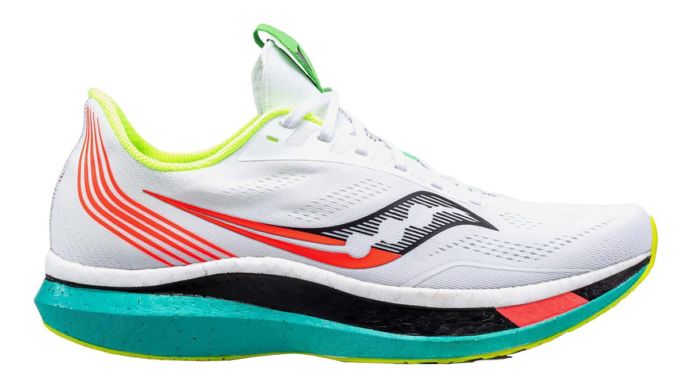 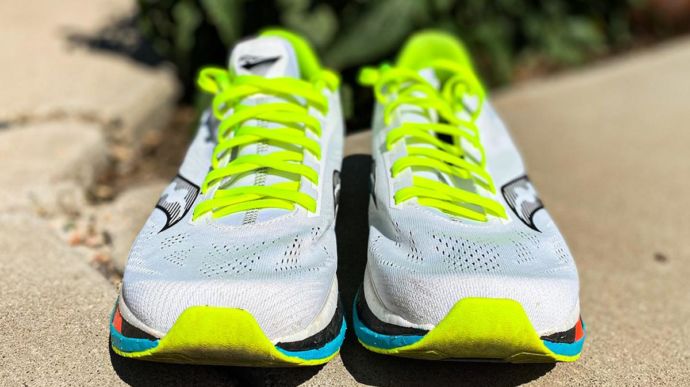 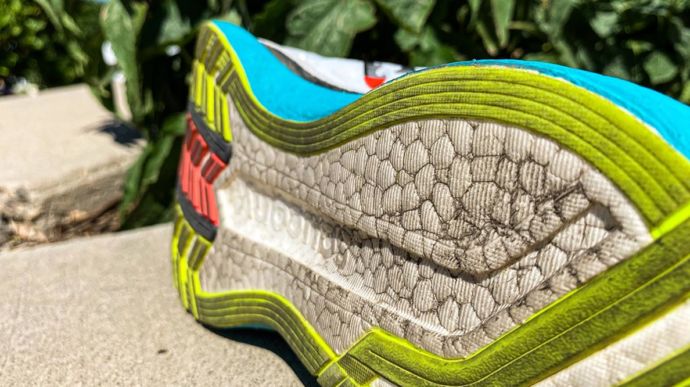 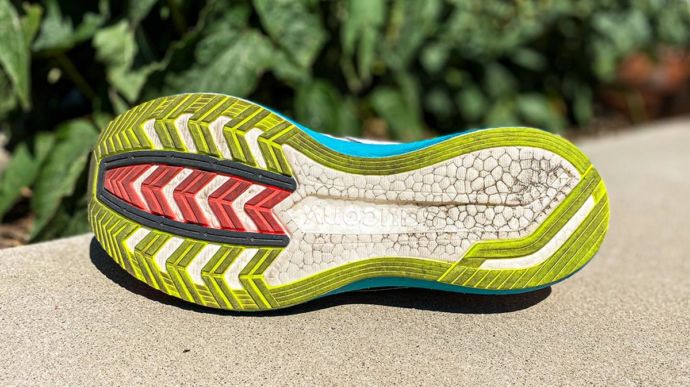 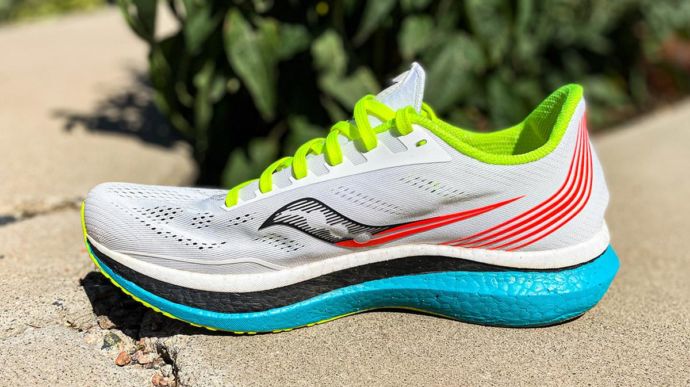 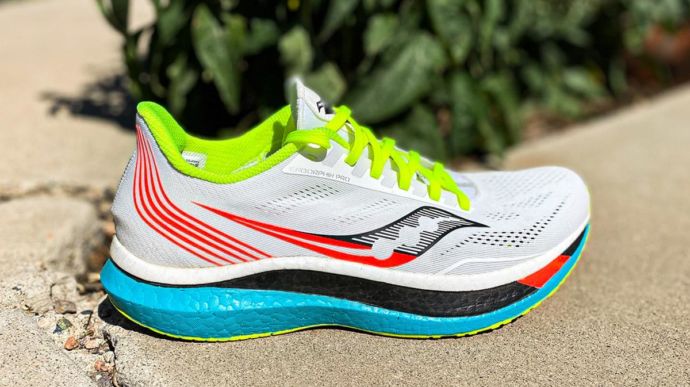 The Saucony Endorphin Pro is aggressive enough for the elite while being stable, well cushioned, and smooth for the masses. If you want a smooth, responsive, and enjoyable ride for longer races or your next PR, this is your shoe.
WHERE TO BUY
LOWEST PRICE
$69
SHOE INFO
Saucony
Brand
Endorphin Pro
Model
Racing
Type
7.5 oz. (213 gr.)
Weight
199.99 US$
MSRP
8 mm
Heel Drop
WHO IS IT FOR
Those who want a comfortable, cushioned distance racer for 10k and upward.
Help me choose

Gracing the feet of its most elite runners like Parker Stinson, Jared Ward, and most notably 2nd place Olympic Trials Marathon finisher Molly Seidel, the Endorphin Pro was just seen and not available to us mere mortals, until now.

The time has come and the much anticipated wait is over for Saucony’s offering in the carbon plated arms race.

The Pro is the centerpiece of Saucony’s Endorphin line of shoes, which includes the Endorphin Shift and Speed, and is its top of the line distance racing shoe being offered.

Similarly to others in the class the Endorphin pro is a high stack, highly energetic foam, and full length carbon plated racing shoe focused on the marathon distance.

With such an enormous amount of time and development going into this shoe and with high expectations the biggest question on everybody’s mind is, are they worth the wait?

Will the Endorphin Pro be a worthy competitor to the likes of the Vaporfly/Alphafly and Carbon X?

In full disclosure, aside from the Speed Elite Hyper, I have not had the opportunity to run in that many carbon plate racers. With that said I will keep things pretty objective and leave out any speculative comparisons.

Aside from the high stack height, the first thing I immediately felt was the liveliness of the foam that isn’t like any traditional foam I have encountered.

Much like my dogs when I lay hands on a leash these shoes are the same when placed on a runner’s feet, they beg to get out the door and go for a run.

Incredibly smooth is the best way to describe the ride of the Endorphin Pro.

There are a few parts of the midsole that work harmoniously together to create this ride but none of it would really be possible without the PWRRUN PB foam.

This is a new PEBA based foam that is only used in the Endorphin Pro and speed. The pellet-like structure of the foam resembles that of Adidas Boost but is slightly more expanded making it bit softer, lighter, and more responsive.

The foam produces a highly cushioned ride that borders on being plush, but not to the point that my feet felt like they were sinking into the midsole.

This midsole is definitely firm but very bouncy which makes it highly propulsive. The S-shaped carbon fiber plate is firmly embedded inside the PWRRUN PB midsole and runs the length of the shoe.

The plate keeps the shoe firm with little flex. the plate matins a clean forward roll which is more noticeable at faster speeds and stabilizes the bounciness of the foam in the heel.

I think the biggest game-changer with this midsole is the Speed Roll technology.

Unlike classic rocker technologies, The Endorphin Pro midsole is pretty flat from the heel to the ball of the foot where the midsole then curves upward to the toe.

The stiffness of the shoe combined with his curve propels it forward the second you begin to lean toward the toe.

This forward roll continues al the way through toe-off. The roll is subtle but amazingly effective at providing a smooth, quick turnover.

Like everything else on this shoe, the outsole has been well thought out and constructed. The thin layer of carbon rubber is everywhere you need it and none where you don’t.

Overall traction was great on wet or dry pavement or packed dirt.

The ride of the Endorphin Pro is very unique. I felt protected by the high stack height but still quick and speedy from the firmness of the plate which makes it fun to run fast in.

The shoe is awkward at slower paces but is easily warmed up and cooled down in, but really hits a sweet spot on longer repeats, tempo runs, and long pace efforts and for me felt ideal at half marathon to marathon pace.

Once I found a rhythm and stayed there the shoe is amazing and performs flawlessly, but say around 5k pace it felt like I was making the shoe perform before it was ready.

The upper is made from a single piece of thin single-layered engineered mesh. The material is pliable with the only structure coming from the bonded logo overlay, laminates around the heel, and an internal toe bumper.

The tongue is simple and thin with a gusseted design that eliminates any chance of bunching or movement. The design is simple with no unnecessary material that is effective, lightweight, and highly breathable.

The heel of the shoe does present a bit of a flaw in an otherwise near perfect upper. The heel has a flare design that reduces Achilles friction also lends itself to heel slippage.

This may be more pronounced for those with narrower feet. However, with heel lock lacing I was able to resolve the issue and never had further issues.

Perhaps in future versions, Saucony might resolve this issue with a more traditional heel similar to that of the Speed.

There aren’t many shoes out there than I can honestly say are one of my favorite running shoes of all time, but the Endorphin Pro certainly checks all the boxes.

Saucony has done an outstanding job developing a real deal race shoe that is not just suited for the elite runner but the masses as well. The Pro is a smooth, comfortable, and a consistent long distance racer.

The Pro is a fantastic shoe to run in and joy to run fast in.

The shoe provides the perfect amount of protective cushion with an abundance of energy return, and buttery smooth roll that propels a runner forward encouraging speed.

I can say without a doubt there is not a person I wouldn’t recommend these to, and without question will be on my feet at my next marathon.

We purchased a pair of Saucony Endorphin Pro from runningwarehouse using our own money. This did not influence the outcome of this review, written after running more than 50 miles in them.

Visit ShopRunningWarehouse.Com
This page contains affiliate links. As an Amazon Associate I earn from qualifying purchases.
WHERE TO BUY
LOWEST PRICE
$69