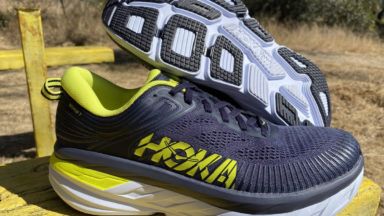 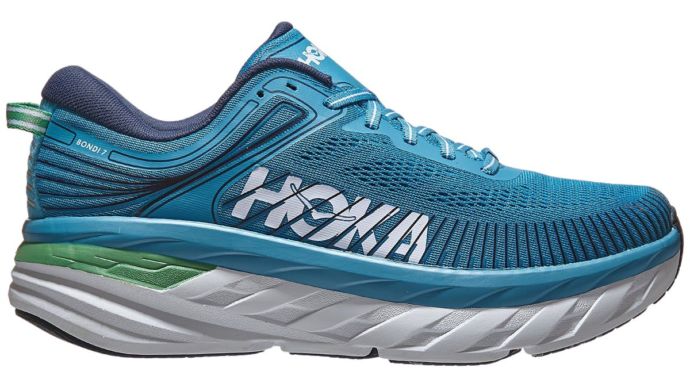 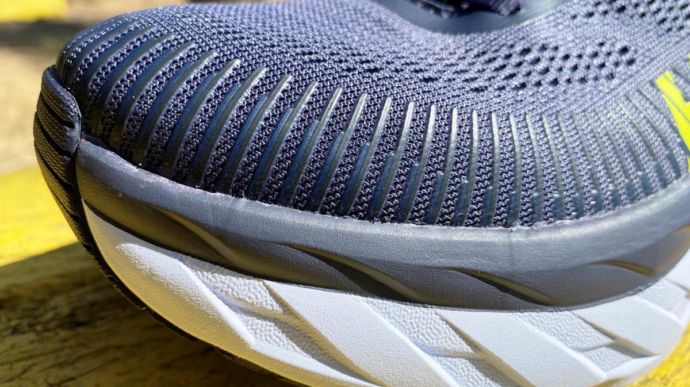 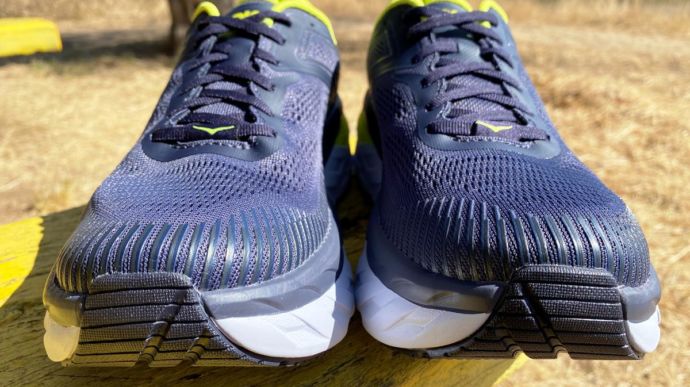 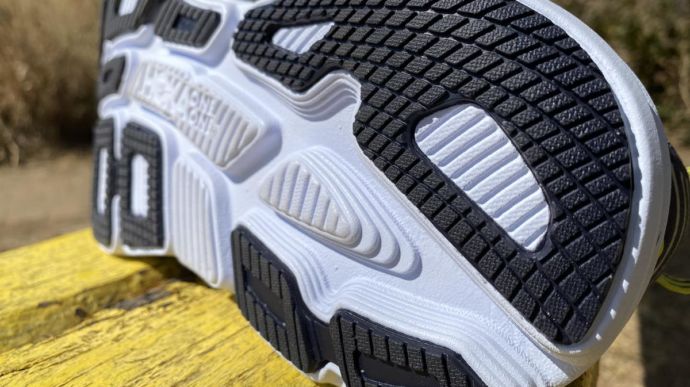 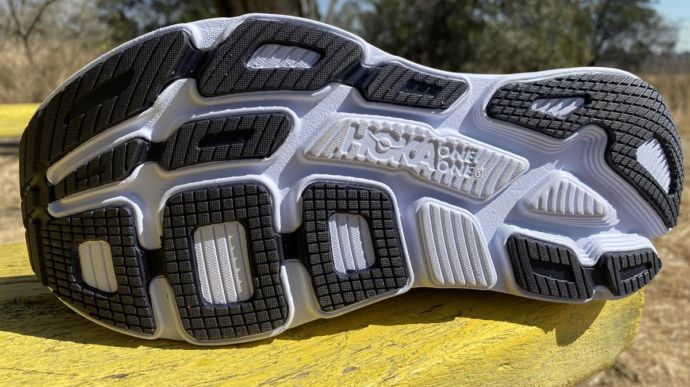 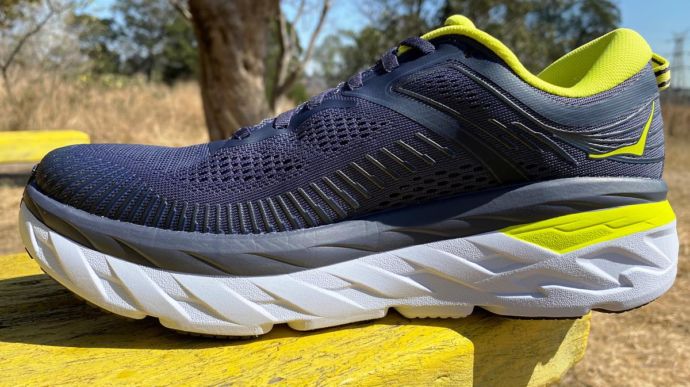 The Bondi 7 is supposed to be a max-cushioned, long-distance trainer but it rides more like a daily trainer.

Its stiff Meta-Rocker midsole helps roll you through transitions and makes the ride feel efficient, however the Bondi 7 is missing the signature Hoka “running on clouds” experience.

Version 7 has been updated with a new upper, the biggest addition being a comfortable memory foam collar. It maintains the same midsole and outsole as its predecessor.
WHERE TO BUY
LOWEST PRICE
$127
SHOE INFO
Hoka One One
Brand
Bondi 7
Model
Cushioning
Type
10.7 oz. (303 gr.)
Weight
150 US$
MSRP
4 mm
Heel Drop
Bondi 6
Previous model
WHO IS IT FOR
If you're a runner looking for a narrow-fitting trainer with plenty of stability features, the Bondi 7 is for you. While not being super soft, the Bondi 7 works well for easy runs between 10 and 20 kilometres.
Help me choose

Hoka One One Bondi 7 Intro

I can remember my very first run in a Hoka. While countless brands describe running in their trainers as “like running on clouds”, in my experience, this was the first time that I actually felt that experience.

Their oversized midsoles and thick stack heights provide a level of cushioning that no other brand can match and their marshmallow-soft midsoles provide bottomless cushioning while feeling much lighter than they look.

Hoka says on its website that the Bondi is the most cushioned Hoka running shoe. It falls into the max-cushioned category and from looks alone, it looks like it could steamroll the competition with its massive stack heights.

The Clifton is already a very soft shoe so I was excited to try the Bondi which is supposed to be even softer.

The Bondi 6 was released 2 years ago so the Bondi 7 was two years in the making. However, the Bondi 7 is still only a minor update to the Bondi 6. It has the same midsole and outsole but gets a brand new upper.

Hoka One One Bondi 7 First Impressions

Hoka One One Bondi 7 – Lateral Side

When taking the Bondi 7’s out of the box, the sheer enormity of the shoe was amazing- by far the biggest running shoe I’ve ever bought.

They reminded me of hiking boots and they are definitely not a shoe I would wear casually.

I tried flexing the Bondi 7’s thick midsole but it was really stiff and inflexible, much stiffer than the Clifton.

Compressing the midsole with my fingers, I noticed that the foam felt much firmer than the foam of the Clifton and the Rincon.

When putting on the Bondi 7 for the first time, I could feel the bucket seat arch against my midfoot. This is a sensation that I also felt in the Clifton which I eventually got used to.

My first run in the Bondi 7 was a slow recovery run and an underwhelming one. The midsole felt really firm: firmer than the Clifton and even the Rincon. I expected the ride to be marshmallowy soft but it was more medium firm.

Once I got used to the idea that the Bondi 7 is not a super soft shoe, my second run in them was more pleasurable. They felt efficient and faster than I expected them to feel.

It was a long weekend run which is usually around 30 kilometres on average but on this run, I had to stop at 22 kilometres due to the shoe not possessing enough cushioning and comfort to go the full distance.

Hoka One One Bondi 7 Sole Unit

The Bondi 7’s midsole, like most of Hoka’s shoes, is plain, good old-fashioned, compression-molded EVA foam. Being EVA, it doesn’t possess the same high energy return of TPU or Pebax foams.

Its medium-firm density midsole makes it more versatile and makes the Bondi 7 feel more like a daily trainer than a max-cushioned one.

I used the Bondi 7 for easy-paced runs between 10 and 20 kilometres. I found it much too firm to be a recovery run shoe and was even too firm for me for my long runs but middle-distances were the sweet spot.

My favourite thing about the Bondi 7 is its early stage Meta-Rocker midsole. It works similar to a rocking chair in that the shoe is stiff so instead of flexing, it rolls you through transitions, improving efficiency.

The rocker midsole is one of the things that Hoka got right on the Bondi 7.

While many of the Hoka trainers have a rocker geometry midsole, most of them flex in the forefoot so the rocker cannot effectively roll you but the stiffness of the Bondi 7 helps the Meta-Rocker shine.

Stability in the Bondi 7 is excellent. The midsole is not overly soft so there is no lean bias. The base is also wide so footstrikes feel planted no matter which position your foot strikes the ground.

Hoka One One Bondi 7 – Medial Side

The edge of the midsole is raised so that it forms a guidance rail around the perimeter of the shoe to help keep your feet centred. This also increases stability in the Bondi 7.

I thought that I would get used to the prominent arch of the Bondi 7 as I ran more in the shoe but this wasn’t the case.

I could always feel the arch throughout my runs and even though it didn’t cause me any pain, the sensation was always present, like a mosquito that flies around you but never bites you.

The Bondi 7 is a neutral shoe that feels like a stability shoe.

The midsole is a single piece of uniform-density foam, so transitions are very smooth. The rolling effect of the Meta-Rocker feels efficient so picking up the pace doesn’t feel like too much of a chore compared to other heavy shoes.

One thing I noticed is that the Bondi 7’s EVA midsole performs very differently in various climates.

Early morning runs in South Africa where it’s winter right now definitely felt firmer than in Singapore where the heat and humidity is much higher.

The insole of the Hoka Bondi 7 is a thick Ortholite foam one which adds a layer of sink in comfort. Underneath the insole is a white perforated strobel lining which makes the ride softer.

Hoka One One Bondi 7 – Sole

The outsole of the Bondi 7 has copious amounts of rubber coverage and has blown rubber on all the high wear areas. This rubber durability is acceptable but not close to Continental or AHAR+ rubber.

There is a small amount of exposed midsole on the midfoot not covered with rubber to save weight. This area scuffs as it scrapes the ground but it doesn’t change the ride of the shoe.

I found that the Bondi 7 has excellent traction on tar roads, pavement, grass and gravel and in both wet and dry conditions.

Durability of the Bondi 7 is just average. While it feels very well built and the outsole doesn’t show much wear yet, the Bondi 7’s EVA midsole will eventually lose cushioning and become firmer over time.

Hoka One One Bondi 7 Upper Unit

Hoka One One Bondi 7 – Lace

The Bondi 7 fits very narrowly and the average person will have to get the wide version. Even I found it to be snug and I have extremely narrow feet. The upper also doesn’t stretch much so it’s not very accommodating.

Its toe box height is fine but the width is too narrow and I could feel the sides squeezing my feet during runs.

The upper is made from a multi-layer engineered mesh which is of average breathability.

There are lots of thin overlay strips around the perimeter of the toe box and midfoot which give the midfoot and toe box some extra structure and protection.

On the heel and around the eyelet holes there are smooth laminated overlays which make the upper stiffer but also stronger.

The new addition to the Bondi 7 is the memory foam collar which feels like a dense sponge that slowly springs back to shape once you compress it.

Hoka One One Bondi 7 – Closeup

Hoka says that the new memory foam collar was designed to accommodate a narrower heel and it worked perfectly with mine.

The heel counter and tongue are adequately padded and protected my ankle areas from any uncomfortable pressure.

The tongue is not gusseted but it has wide wings which hold it in place during runs so no tongue slide occurs.

The Clifton 7 has a gusseted tongue and it is $20 cheaper than the Bondi so the reason why Hoka decided to skip out the Bondi 7 is a mystery.

On the heel are 5 thin reflective strips so that during night runs, cars coming from behind can see you.

Overall, the upper of the Bondi 7 is far too narrow and not plush enough to match the luxurious, padded uppers of the other max-cushioned cruisers.

While the memory foam collar is a nice addition, the Bondi 7’s upper is not as comfortable as the competition.

Hoka One One Bondi 7 Conclusion

The Hoka Bondi 7 is not a bad shoe. It gets a lot of things right like its secure foot lockdown, its durable outsole and its stable ride.

Its Meta-Rocker midsole makes transitions feel efficient and it has plenty of stability features.

However, the Bondi 7 is supposed to be a max-cushioned, long distance trainer but it doesn’t fit into the category it was meant to fit into. In the Bondi 7, you don’t get the real “running on clouds” experience.

Its midsole is not soft enough for distances over 20 kilometres and the Bondi 7 for me, fits more into the daily trainer category but even as a daily trainer, the Bondi 7 is too heavy and expensive.

Hopefully Hoka makes the Bondi 8 much softer and adds in a gusseted tongue because as it stands, the Clifton 7 is a better Bondi than the Bondi 7.

Get the Bondi 7 only if you want a firmer, more stable ride with a more durable outsole. Otherwise, the cheaper Clifton is a softer ride and a better max-cushioned trainer.

We purchased a pair of Hoka One One Bondi 7 from runningwarehouse using our own money. This did not influence the outcome of this review, written after running more than 50 miles in them.

Hoka One One Bondi 7 Price Comparison

Visit ShopAmazon.com
This page contains affiliate links. As an Amazon Associate I earn from qualifying purchases.
WHERE TO BUY
LOWEST PRICE
$127

Similar shoes to Hoka One One Bondi 7