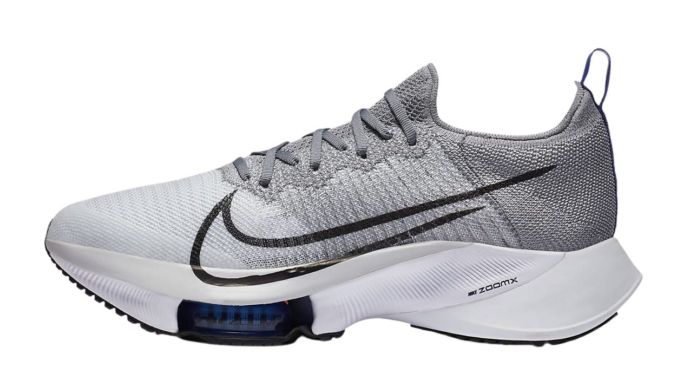 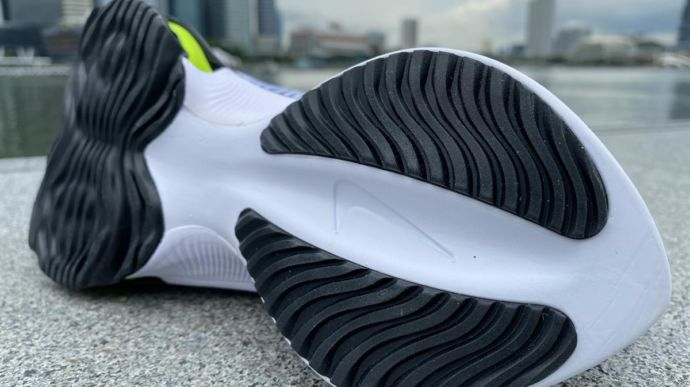 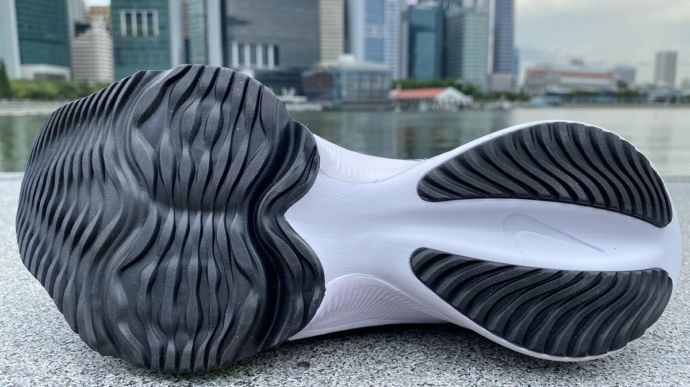 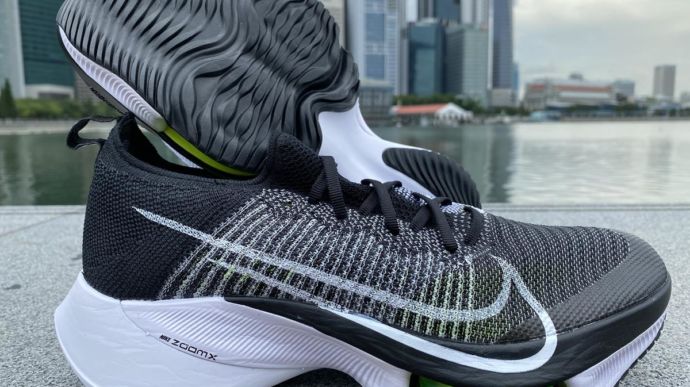 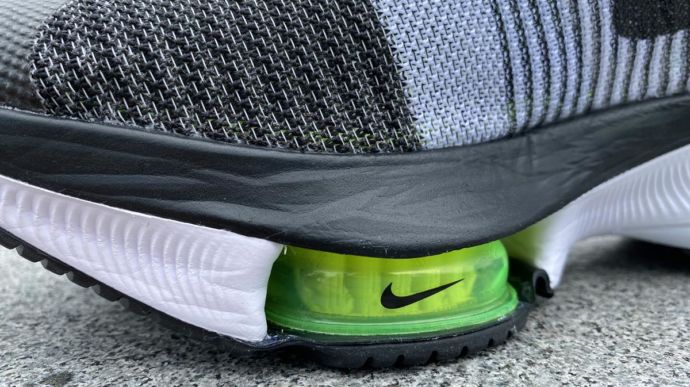 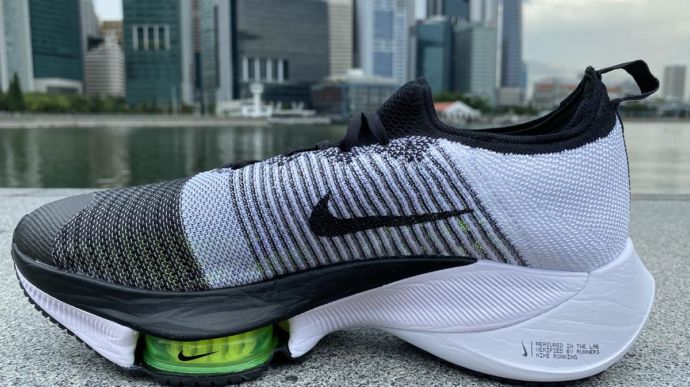 The Nike Tempo Next% is supposed to be the replacement for the Pegasus Turbo 2 and a training companion for the Alphafly Next%.

While having a very unique and highly responsive ride, the Tempo Next% rides much firmer than the Pegasus Turbo 2 and a little too firm for easy and marathon paced runs. It's best suited to fast runs below 15 kilometres.
WHERE TO BUY
LOWEST PRICE
$200
SHOE INFO
Nike
Brand
Air Zoom Tempo Next%
Model
Cushioning
Type
8.9 oz. (252 gr.)
Weight
200 US$
MSRP
10 mm
Heel Drop
WHO IS IT FOR
If you're a heavier runner looking for a shoe for mainly fast runs and price isn't an issue, get the Tempo Next%.

It has a comfortable upper with great lockdown and a firm but very responsive ride.
Help me choose

It’s finally here. The Tempo Next% is one of the most eagerly anticipated shoes of the year and without a doubt the shoe that I’ve been the most excited about.

While being an exciting shoe, it doesn’t have a very exciting name. This is already the third Tempo-named shoe this year alone, the first two being the Hyperion Tempo and the Fresh Foam Tempo.

For a brand new shoe with such a big reputation, it was strange that the Tempo Next% received none of the marketing hype that other Nike newcomers have received.

Advertising for the Tempo Next% was below Pegasus Turbo 35 levels and nowhere near Epic React levels. It could be that Nike has such high confidence in it that they don’t feel that it needs a marketing push.

That or else they don’t have the stock ready to go if it sells out quickly.

The Pegasus Turbo 2 was a great shoe. It was super soft while also being super responsive which is a rare trait.

I was heartbroken to hear the news that the Pegasus Turbo 2 was being discontinued, to be replaced by the Tempo Next%.

Both shoes have a dual-foam setup of ZoomX and React foam but the main difference is that the Tempo Next% has two giant Zoom Air pods in forefoot for extra explosiveness. The Next% also gets a price bump of $20.

So is the Tempo Next% a good replacement for the Pegasus Turbo 2 and is it worth its huge price?

In hand, the Tempo Next% felt fancy and premium: like the running shoe version of an Apple product.

There’s an amalgamation of Nike technology in the shoe including two different foams, a composite plate and large, thick air bags.

Lots of people think that the Tempo Next% looks ugly but I like the design of it and have no reservations about wearing them out casually.

They strike the perfect balance between innovative and futuristic and I really like the black and white “panda” colourway of mine.

When compressing the ZoomX foam in the midfoot and forefoot with my fingers, it felt soft and squishy. The React in the heel felt dense and rubbery.

I flexed the shoe to test the rigidity of the composite plate and I was surprised at how flexible it was- much more flexible than the Alphafly, Vaporfly and Zoom Fly 3 carbon plates.

Walking around in the shoe made me feel a lot taller because of the huge midsole stack height. It felt like I was walking on top of a shoe rather than inside a shoe- a sensation similar to wearing the Ultraboost ST.

The ride of the Tempo on my first run felt much firmer than I expected them to feel.

Considering it was designed to be a daily trainer, and how squishy the ZoomX felt in hand, I expected the ride to feel soft and bouncy but instead, it was firm and springy.

The shoe felt better the faster I ran in them.

While the name of it isn’t very original, the name “Tempo” certainly is very fitting. The firm ride of the shoe really shone at faster paced workouts below 5.30 per kilometre.

The shoe name in itself is a contradiction.

The firm nature of the shoe prevented me from going further than 15 kilometres in a single run. By the 13th kilometre my feet were already begging me to come home.

Ride transitions in the Tempo Next% are really unique. As you land on the heel, it’s quite a firm landing, similar to that of the Zoom Fly 3 because of all the React in the heel.

From the heel, you skip out the midfoot and immediately transition to the forefoot because the midfoot of the shoe floats above the ground.

In the forefoot, the firm Zoom Air pods don’t compress all that much like you would imagine. That’s because the firm composite plate above the Air pods distributes weight evenly.

What I felt going over the air pods was similar to the sensation of going over a miniature speed bump.

Heavier runners will be able to engage the Zoom Air units more.

For a light runner such as myself, I felt like the air pods were not compressing enough for me to truly benefit and I felt like I was missing out on all the air bag action.

It would be great if Nike made the Zoom Air pods different densities depending on your weight, like how they made the women’s Zoom Air unit in the Pegasus 37 softer than the men’s version.

There is a strong “tipping” sensation I felt when running in the Tempo Next%.

During transitions, as I rolled my feet through the firm Zoom Air section of the forefoot, I immediately transitioned to the much softer ZoomX foam underneath my toes, like going down a step.

I found fast runs in the Tempo to be really fun and unlike any other shoe I’ve ever run in. The air pods have more rebound the harder you strike your forefoot so during fast runs, footstrikes feel explosive.

The thing that sets the Tempo back is that it’s a lot heavier than other tempo shoes. It’s heavier than the Boston 9, Hyperion Tempo, Razer 3 and the Beacon V3.

With all that’s going on in the Tempo’s midsole, transitions are not very smooth and during runs I never felt like I could relax my legs and zone out.

The combination of the disjointed transitions and the very high midsole which does not compress much made the ride feel clunky, especially at slower paces.

The composite plate in the Tempo Next% can be seen, which is a rare thing for a plated shoe. It sits directly above the Zoom air pods in the forefoot and has a lot of flex to it.

Instead of to create a propulsive feel, the job of the plate in the Tempo is to provide structure and stability in the midsole as well as to stop the air pods from poking into the bottom of your feet.

Talking about stability, it was great when I was running in a straight line, however when turning a corner, I immediately felt pressure on my ankles and I had to slow down for fear of rolling an ankle.

The tall midsole stack height is the reason the Tempo feels unstable when cornering because the Tempo has a firm ride so there isn’t much lean bias.

The outsole of the Tempo has proven to be really durable during my time of testing with wear showing only where I strike on the lateral heel posterior.

The entire forefoot is covered with thick rubber and there are two long strips of thick rubber on the rearfoot.

I found that traction was great on dry surfaces but on wet pavement and wet grass it proved to be slightly slippery.

The Tempo feels like a really well-built shoe and I expect it to last over 800 kilometres.

ZoomX is Pebax while React is also a durable foam that doesn’t lose much cushioning over time. The thick rubber on the outsole also won’t be wearing down prematurely.

For the first time in years, Nike has designed an upper which fits me like a glove and that I actually enjoy wearing.

The bootie construction upper of the Tempo Next% consists of a high-tenacity translucent Flyknit forefoot and midfoot. The heel material is thicker and non-translucent.

Breathability is excellent in the forefoot but the shoe is hotter in the midfoot and heel as the material is thicker.

The only overlay is found on the toe box for extra protection. It’s thin, soft and very flexible.

The collar comes up high around the ankle so I made sure that I wore high socks to prevent any unwanted chafing.

Inside the heel collar is a padded, wrap-around pod to hold the heel in place and stop any heel slippage.

There are last row double eyelets but being a booty construction means that you can’t do heel lock lacing. I didn’t miss that feature at all because heel and midfoot lockdown is already superb.

The fit of the upper is true to size and very comfortable. The opening is a little on the small side but the toe box is spacious and deep.

So is the Tempo Next% a good replacement for the Pegasus Turbo 2? No.

Runners who loved the super soft, super light package of the Pegasus Turbo 2 will be disappointed with the firm, clunky ride of the Tempo Next%.

Is the Tempo Next% a good training companion to the Alphafly Next%?

It has a similar ride due to them both having Zoom Air pods and similar outsoles but the ride of the Tempo feels muted and not as responsive because of the absence of the stiff carbon plate.

The Tempo is not as cushioned and is also less stable than the Alphafly because its forefoot doesn’t flare out to create a stable base.

The Tempo is a really fun shoe to run fast efforts in but the problem is that it’s supposed to be a daily trainer. For me, my daily trainer has to be more forgiving and have better long-distance comfort.

If Nike can soften the ride and lower the price of the Tempo Next% 2, they might have a big hit on their hands. As it stands, $200 is a lot of money to pay for a tempo trainer which is on the heavy side.

We purchased a pair of Nike Air Zoom Tempo Next% using our own money. This did not influence the outcome of this review, written after running more than 50 miles in them.

Visit ShopNike
This page contains affiliate links. As an Amazon Associate I earn from qualifying purchases.
WHERE TO BUY
LOWEST PRICE
$200