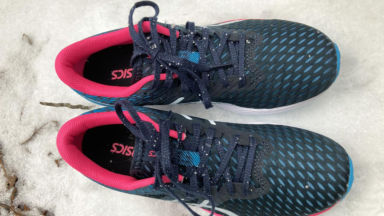 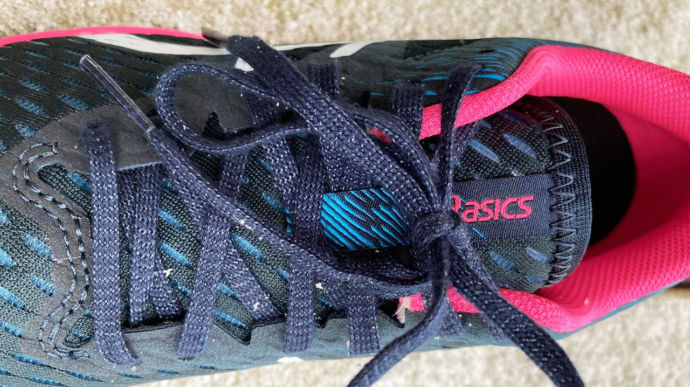 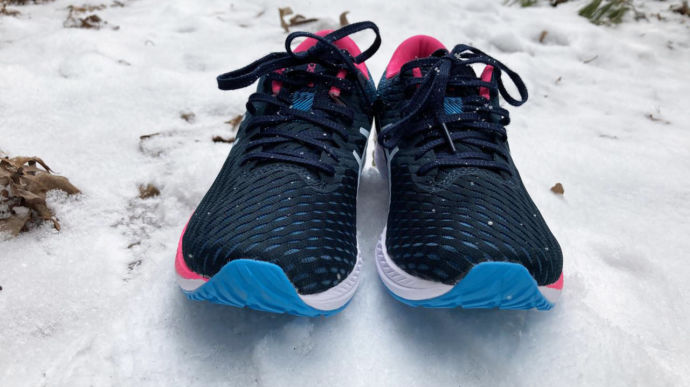 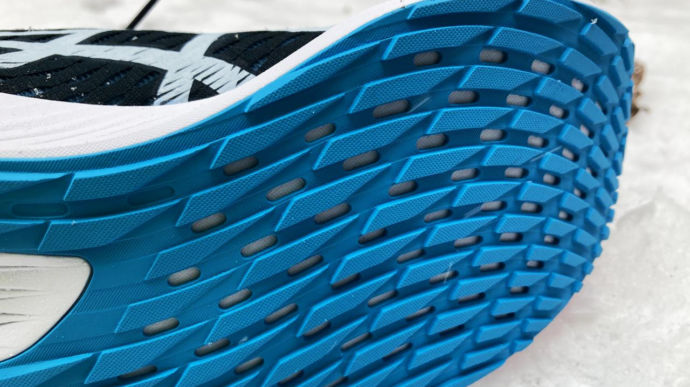 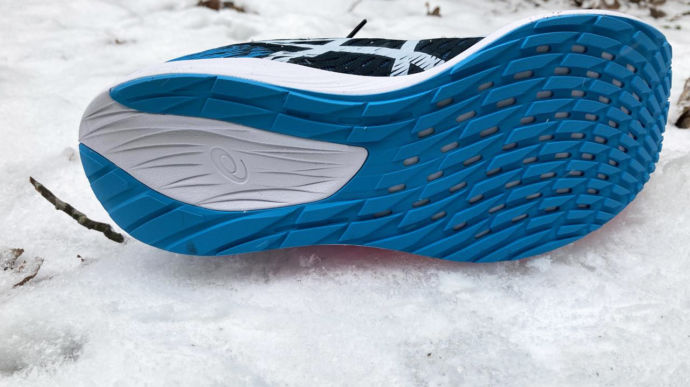 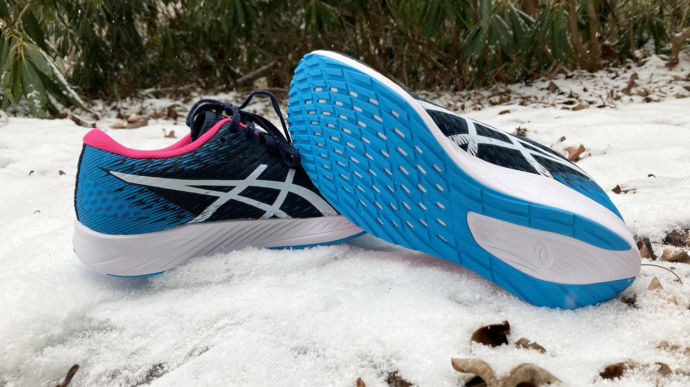 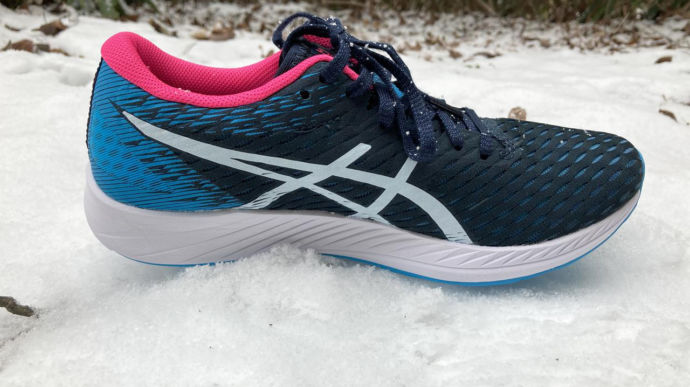 The Asics Hyper Speed is more reliable than ever as a trustworthy racing flat that can withstand mile after mile of your half marathon and 10k workouts or races.

True to form, the new Hyper Speed is lightweight, comfortable, and uncomplicated. This is the ideal, affordable half marathon flat for budget-conscious runners.

Asics’ Hyper Speed line has been around for years, but the 2021 model marks the first release since 2017. The shoe is much improved, taking cues from Asics’ elite carbon-plated racing flat, the Meta Racer, but without the carbon-plate.
WHERE TO BUY
LOWEST PRICE
$50
SHOE INFO
Asics
Brand
Hyper Speed
Model
Racing
Type
7.4 oz. (210 gr.)
Weight
90 US$
MSRP
7 mm
Heel Drop
WHO IS IT FOR
Neutral-footed competitive runners on a budget or heavier runners looking for a 5k-10k racing flat
Help me choose

The Hyper Speed has a long history of getting runners to the finish line faster.

The shoes have held their place in Asics racing line-up for at least a decade and have benefitted from several notable improvements over the years, most recently riding the coat-tails of design innovations developed for the Asics Meta Racer.

While it doesn’t feature the carbon plate, FlyteFoam, or Wet Grip rubber outsole, the Hyper Speed is stocked with the next-best suite of Asics technology to offer incredible quality for the price.

They are much more cushioned with a taller stack height than earlier models, but advances in midsole foam mean they are still just as light.

Weighing in at 6.1oz for women and 7.4oz for men, they’re lighter than most competition shoes on the market at similar price points.

With a 5mm heel-toe offset, the Hyper Speed promotes quick transition to toe-off for fast turnover.

I tested the Hyper Speed on paved surfaces, but suspect it would perform just as well on finely crushed gravel or a cinder track.

The ride is soft but responsive – perfect for a half marathon. If you loved the Hyper Speed years ago, this model is sure to re-kindle the fire.

Upon first stepping into the Hyper Speed, I realized it has come a long way from the flats I was racing in collegiately ten years ago.

While it has always been a flexible, softer shoe, the new Hyper Speed is infinitely more responsive.

I was pleased to notice that the new models still maintain their commitment to being a no-frills, lightweight, classic competition shoe.

The fit is perfectly balanced – snug, but not too tight. And they run true-to-size. These shoes have plenty of get-up-and-go straight out of the box; no break-in necessary.

The midsole and outsole of the Hyper Speed boast several improvements over early models. The updated Hyper Speed features higher-stack midsole foam and energy-efficient technology to maximize energy return with each foot-strike.

Like the Meta Racer, this employs Asics Guidesole technology and a curved mid & outsole for enhanced efficiency as the foot moves through the gait cycle.

This translates to the efficient and quick turnover needed for competitive racing. The ride is smooth and strikes a perfect balance between comfort and responsiveness.

The outsole is undoubtedly the most durable Hyper Speed outsole to date. Earlier models featured small openings in a grid pattern throughout the outsole that were intended to make the shoe lighter and more breathable.

While the holes served their purpose, they also allowed any moisture on the road to soak into the midsole like a sponge. They were also great at picking up tiny rocks.

Needless to say, I’m glad to see that the revamped Hyper Speed Outsole does not perpetuate this design flaw.

The outsole is still perforated to minimize the weight of the rubber, but the midsole is not penetrated and my feet stayed dry even running through puddles.

Although, they come nowhere close to the grip provided by flats like the Adidas Boston with a Continental outsole or Asics Meta Racer with proprietary Wet Grip Rubber.

With a higher midsole stack height than ever before, the new Hyper Speed provides plenty of cushion for the pushin’. Innovations in Asics’ midsole foam allow a thicker midsole while keeping the flat to an ideal race weight.

This is a welcome improvement that increases both the utility and the durability of the shoes. Competitive runners can now enjoy the Hyper Speed for distances over half marathon, (although I would be hesitant to race a full in them).

And, the improved outsole and midsole mean squeezing more miles out of these flats, making them an even more cost-effective race-day choice.

Asics’ signature Guidesole technology complements the rocker-like shape of the shoe to encourage the foot to quickly roll through gait cycle for fast turnover.

The result is a sense of forward propulsion that encourages a more efficient foot-strike. I am a heel-striker and found myself landing more toward the middle of the foot when running quickly in the Hyper Speed.

I definitely felt that my footstrike was more efficient. For a very simple flat, the Hyper Speed offer plenty of giddyup for race day.

The no-frills Hyper Speed upper boasts a nearly-seamless construction that’s as lightweight as it is stylish.

The thin, mesh upper is incredibly breathable which meant some cold toes as I tested this shoe in the middle of a very chilly winter. I know I will appreciate this feature of the shoes during hot summer racing.

The tongue is thin and flimsy which means it never stays in place as I put the shoes on and always gets scrunched down in the middle of the upper.

The extra step of pulling the tongue back up into place is a bit of an annoyance, but it’s not the end of the world.

Laces are also thin, but don’t pose any issues and keep the overall weight low. The upper hugs the foot snugly, but not too tight resulting in a very comfortable fit.

The Hyper Speed heel counter is relatively stiff compared to the rest of the shoe, and occasionally irritated an old Achilles issue that flares up every now and then.

For most runners, that won’t be an issue and it didn’t stop me from performing several fast workouts in these flats. Despite the stiffness of the heel counter, I did not experience any blisters.

The Hyper Speed is a staple of Asics performance line and I am glad it’s back after a couple of years on hiatus.

Overall, the updated model stays true to the racing spirit of the Hyper Speed by continuing to provide a lightweight competition-ready feel and high-performance comfort.

The Hyper Speed is ideal for runners seeking a versatile flat that doesn’t break the bank. I look forward to racing the 10k and half marathon in this shoe later this year.

We purchased a pair of Asics Hyper Speed from runningwarehouse using our own money. This did not influence the outcome of this review, written after running more than 50 miles in them.