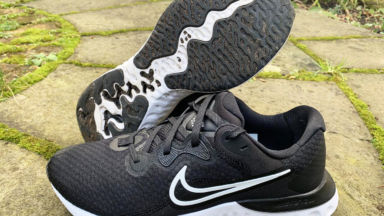 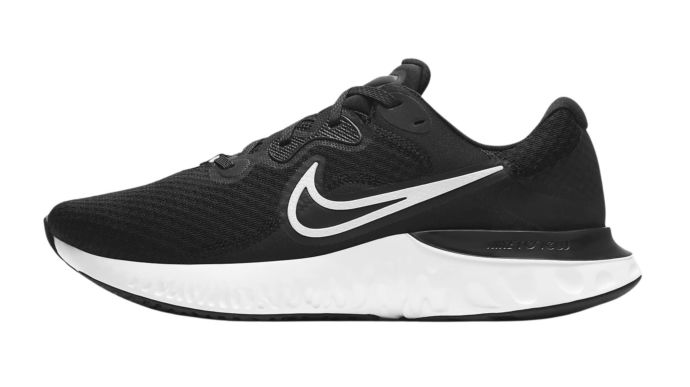 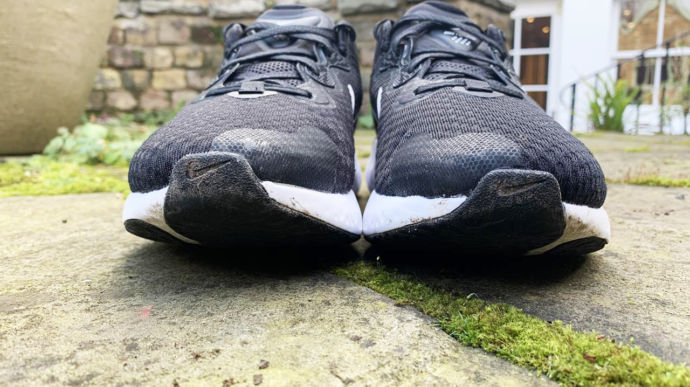 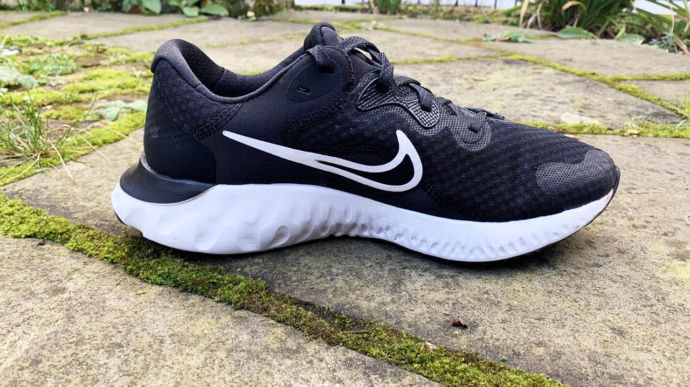 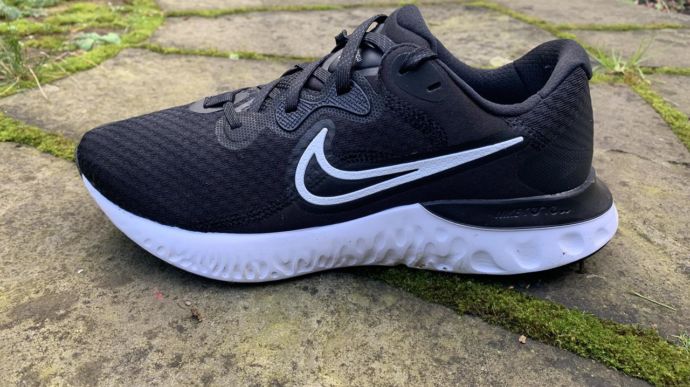 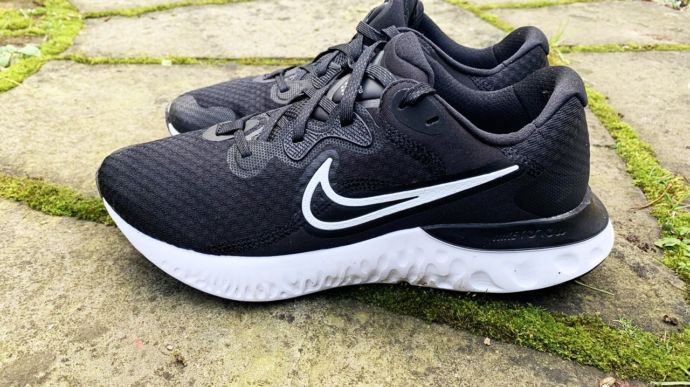 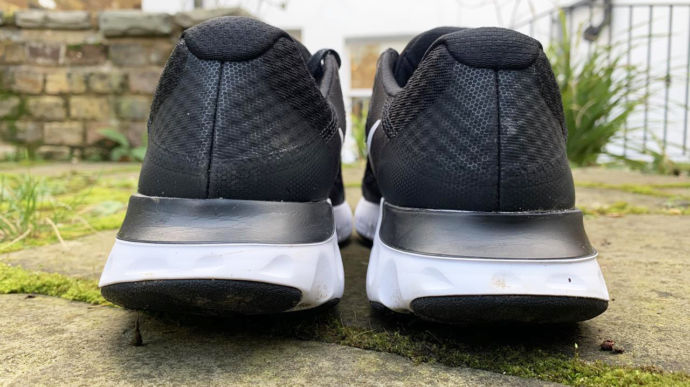 The Nike Renew Run 2 is an entry level, mid price range running shoe that delivers on comfort and cushioning, but is let down over longer distances by its weight and lack of responsiveness.
WHERE TO BUY
LOWEST PRICE
$80
SHOE INFO
Nike
Brand
Renew Run 2
Model
Cushioning
Type
9 oz. (255 gr.)
Weight
80 US$
MSRP
10 mm
Heel Drop
WHO IS IT FOR
The Nike Renew Run 2 is for neutral runners looking for an everyday cushioned shoe that looks great, is comfortable and won’t break the bank.

If you don’t mind too much a weighty shoe, or you’re a fan of Lunarlon foam, it’s worth a shot.
Help me choose

Nike launched the Renew Run 2 with one thing in mind- comfort. That meant a big chunky midsole to absorb the hit of the road, softening the impact on the joints, and a whole load of padding around the tongue and heel cup.

On paper, this sounds like running on big squishy clouds, but did this padding and cushioning translate to a great running experience, or did it look the part but fall short when it came to function?

The Renew Run 2 uses old Nike technologies from years ago to keep costs low, but ‘renews’ and reuses them with some more modern designs to bring them up to date.

The result is a daily trainer, at the mid-lower end of the price range. Looks-wise the Renew Run 2 shares many similarities with the Nike Infinity Run, but that’s where the similarities end.

The first thing to note about the Renew Run is the weight. By far the heaviest running shoe I’ve worn recently coming in heavier than the Winflo 7, React Miler, and Downshifter 10. My women’s UK size 6.5/ EU 40.5 weighs in at 308g.

When first putting the shoe on, you notice the excess padding around the tongue and ankle first. It’s very structured and tough, but locks the foot down well, with no complaints on the comfort or fit side.

On the foot, the fit is true to size lengthwise (I’d go up ½ or full size on your regular shoes), and regular width.

The feel on the foot is most similar to the Winflo range but feels more rigid, padded, and weighty.

On the first run along a wet gravel canal path, the shoe picked up lots of mud and stones both in the outsole grooves and midsole pattern, which contributed to an even heavier shoe.

This was most noticeable after 5km, making my calves ache much more than usual. As my legs became more tired the sole unit felt hard and I didn’t get a great energy return from the shoe.

Aesthetically the shoe has many similarities to the first Renew Run, with the only visible changes being the shaping around the collar and tongue to add in more support.

The outsole in the first Renew Run and the second iteration are identical, with small design changes made to the swoosh.

Although not as impressive, of the previous shoes I’ve been testing recently the Renew Run is my favorite looks-wise. I love a chunky shoe and this one looks fantastic.

All the colorways are spot on and could be easily worn outside of a workout. Even the outsole pattern with its deep grooves are what I’d look for in a great designed shoe.

The sole unit provides dense cushioning and stability over a wide base. The decoupled outsole tops the Lunarlon foam, which has a similar look and feel to Nike’s more premium React foam but feels firmer.

Decoupled outsoles have become popular recently and mean that the shoe has improved shock absorption, reducing the force from the impact of your foot striking the ground and spreading through the rest of the foot.

As the Lunarlon foam is older technology, the midsole is where much of the excess weight of the shoe is found, adding to the heavy, dense feeling on the feet.

The shoe flexes adequately, and gave good heel to toe transitions with a similar responsiveness throughout the gait. This older, heavier foam is where some of the cost savings are made in the shoe.

The outsole rubber coats the Lunarlon foam for good grip traction and durability. It’s a shoe I see lasting well over time, and there’s been no wearing down after 50 miles.

Overall, not a bad sole unit, but nothing to get excited about.

I was hoping as I wore the Renew Run 2’s in I would get more from them, but if anything, adding and comparing them to a rotation of other shoes exacerbated my feeling towards their shortcomings in the sole unit.

The most noticeable thing about the upper is the maximal padding. It is a thick, exaggerated material all the way down the tongue and around the heel cup.

This had the opposite effect of being comfortable for me, I found it to be stiff, rubbing the back of my ankle when I wore shorter socks, and pulling them down into the shoe.

On my first run there was rubbing at the start but this subsided and there weren’t any issues after a few kilometres.

The synthetic textile upper is a dual layer mesh which is breathable and fulfilled its role of my feet dry on a muddy run, TPU overlays around the flat laces help to keep the feet locked down well.

Overlays on the seams and toe box add to the durability and lifespan of the shoe. This extra padding and overlays do the shoe no favours in the weight department either.

The tongue is attached to the shoe underneath the eyelets and stays in place well on a run, whilst remaining easy to get on and off, and the laces stayed tied and tight throughout wearing.

Overall, the Renew Run 2 is an average entry-level shoe. I had mid-expectations and it delivered mid results.

It’s not Nike’s most exciting or hyped shoe release and can be summed up as style over substance.

I’ll use it for occasional short recovery runs in colder weather, and day to day wear outside of running.

The main issue is it’s far too heavy to be a shoe to wear for short fast runs and too hard and weighty to wear over a long distance.

Personally, for the price, I would opt for an older model of a more premium Nike running shoe.

Alternatively, if you’re a heavier runner and want good upper padding and impact protection under the heel, this could be a good choice, otherwise I’d choose something else.

We purchased a pair of Nike Renew Run 2 from runningwarehouse using our own money. This did not influence the outcome of this review, written after running more than 50 miles in them.