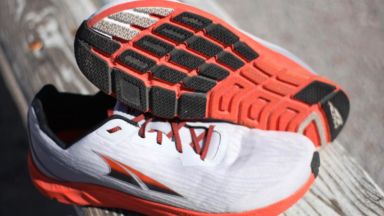 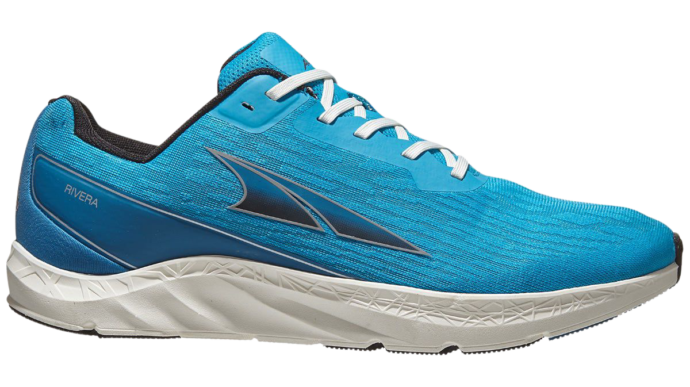 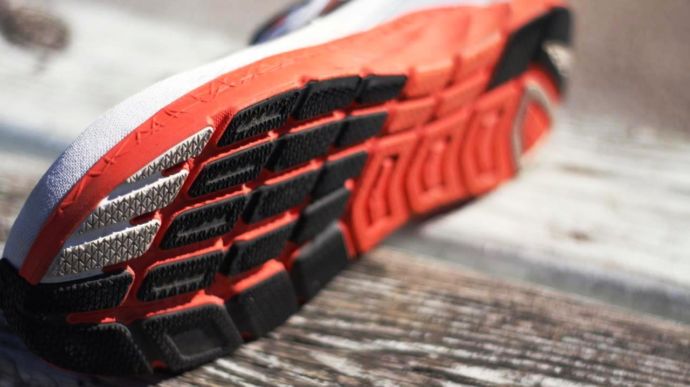 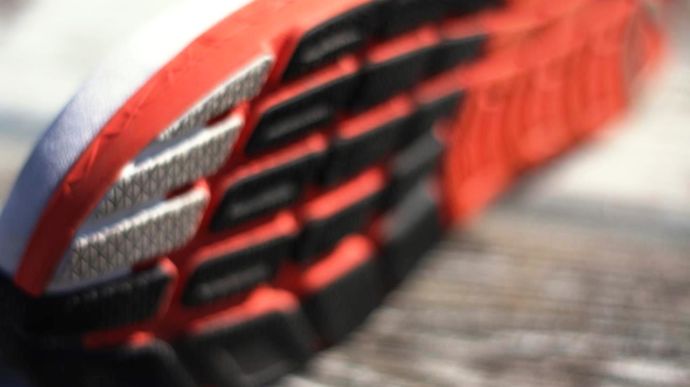 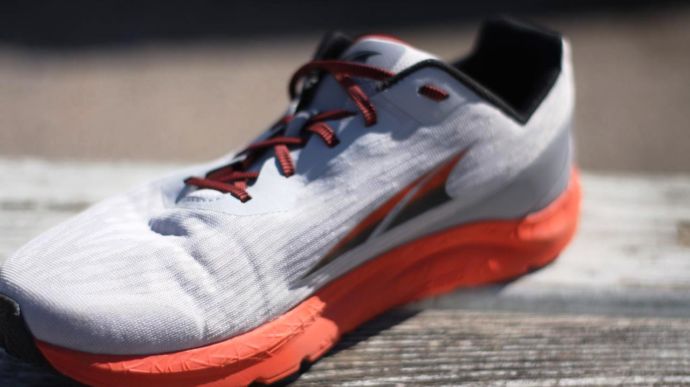 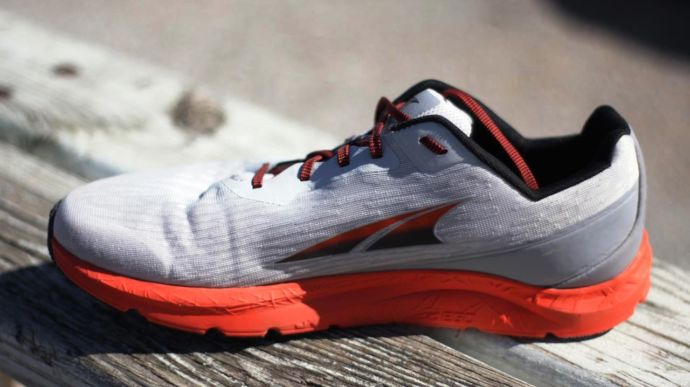 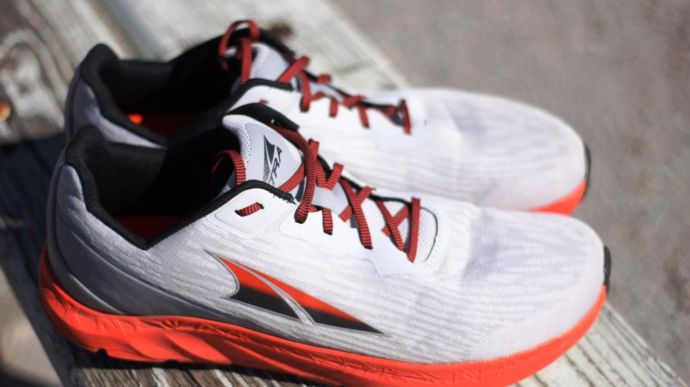 The Altra Rivera meets the needs of a cushioned trainer that can pick up and go. These shoes are fun, and ready to rock straight out of the box.
WHERE TO BUY
LOWEST PRICE
$91
SHOE INFO
Altra
Brand
Rivera
Model
Cushioning
Type
99 oz. (2807 gr.)
Weight
130 US$
MSRP
4 mm
Heel Drop
WHO IS IT FOR
This shoe is for someone who is interested in a zero-drop shoe, and likes the idea of an anatomical fit. I would not recommend these for heavier, new runners.
Help me choose

Altra as a brand has seen a need to bridge between their current offerings in their neutral line.

With the Torin becoming more and more plush each year, and the Escalante staying where it’s always been, they need something between. In fact, Altra disbanded the Torin as we knew it with the Torin Plush 4.5.

Now, the brand was missing that mid-stack trainer. Beyond that, with all the advancements in foam technology, Altra needs to get into the game with a more responsive, energetic ride. In comes the Rivera.

The Altra Rivera bridges the gap between the Escalante and the Torin Plush with a great mid-stack option that Altra runners will love.

Coming in at $130, the Rivera is priced the same as the Escalante and $10 cheaper than the Torin Plush.

At this price point, the Rivera will go up against the likes of Brooks Ghosts, Saucony Ride, New Balance 880, and the Topo Athletic Cyclone (maybe the closest comparable shoe, review to come shortly).

These features distinguish Altra running shoes from other brands and have helped carve out a nice corner of the market for them.

The Riveras deliver on these promises while taking Altra into the next generation of foam technology.

When this shoe showed up on my doorstep, I was extremely excited. I haven’t been able to run in a pair of Altras in a few years, and I wanted to see how they have updated their technology.

When I opened the box and saw the shoes, I was very happy with what I was presented with. For this model, I was sent the gray/orange colorway, and really liked how it looks.

When I first put them on, I loved the feel of the cushion underfoot. It was very light, slightly spongy, and great for walking around.

However, they did feel a little wide – not unexpected, but wider than anticipated – as I walked around. They were perfect for a full day of teaching and walking around.

On my first run, I was pleased with the cushion and responsiveness for a 5-mile tempo run.

However, my foot shifted laterally quite a bit, and I did not feel “locked-in”. This was an issue that took a few changes to correct. I’ll get to that later.

Altra is known for the zero drop from heel to toe, and it uses 28mm of foam for all three of their regular neutral offerings. However, where they all differ is in the feel of the foam, and how much protection the outsole gives.

In the Rivera, Altra used their new foam compound, Altra EGO, as the entire midsole. This new foam is very responsive and gives a great amount of bounce.

Altra uses strategically-placed rubber outsole units on high-tread areas of the sole for better durability and protection. These rubber pieces are focused on the forefoot, with a little on the heel for heel-strikers.

This material give a decent amount of grip, but adds a lot of durability to the outsole. Where the rubber is not present, Altra uses a textured midsole material, which gives great ground feel.

This shoe compares favorably to some of the shoes in which I’ve run lately: NB 1080v11, Hoka One One Mach 4, and Topo Athletic Cyclone.

All of these shoes were designed to have a great amount of energy return and to help you pick up the pace and they all deliver.

Compared to those others, I would say the Rivera has the third most energy return – behind the 1080 and Mach 4 – but is softer underfoot than either of those two.

The upper on the Rivera is a very simple piece. Altra used an engineered mesh that is flexible and breathable. This upper supports your foot well, and uses the Altra signature “footshape” design while fitting perfectly to size.

This simplicity was used to make a shoe that is incredibly light, saving a lot of weight by not adding too much to the upper.

The upper, however, is where I have the most concerns. In the past, Altra shoes have locked in my heel and midfoot, then splayed out to the super-roomy toebox.

However, the Rivera is wider than I was expecting. The heel is still very snug, and I never had an issue of feeling like it was slipping, but once you get out of the heel it widens too quickly.

The midfoot of the shoe is wide, and lacks structures to lock in your foot. This resulted in my foot sliding side-to-side during my first three runs in the shoe until I got it laced and locked correctly.

I had to change the way I laced the shoes twice before I got it locked in as I like. When looking at the laces, I have them pulled tighter than I have on any other shoe in which I’ve run.

This midfoot then widens even more into the toebox. This toebox is luxurious, and I love it. I have enjoyed running in a shoe that gives that much room for my toes to move and widen over the course of my runs. It is wonderful.

The Altra Rivera hits a lot of boxes, and gives a great ride once you have it dialed in. However, I cannot sit here and say they offered perfection on their first offering of this shoe.

The Rivera sits just a little too wide through the midfoot to feel fully locked in, and it takes some time to get it where I wanted it.

With that said, it still is a shoe that I would happily have in my rotation, just not as my featured shoe. It is super lightweight (my size 13 weighed in at 9.5oz), with plenty of protection and cushion for any run I want to do.

The Altra Ego material has a nice bounce, and I felt very happy with the performance when I took it for tempo runs. In fact, this is where I plan to keep this shoe for the moment.

During the tempo speeds, I saw this shoe shine. With the 0-drop design, I feel I can lean forward more and push the pace with great energy return.

Due to weather, I was not able to test it on a track, but I feel it would do well there too.

This shoe has its place, and at $130, it’s priced well. This shoe is truly dialed in for people who were fans of the Torin 2/3 but want a more energetic sole.

And that was my thought while I wore these: this feels like I’m wearing a bouncier Torin 2.5 with a freer upper.

And frankly, I liked that.

We purchased a pair of Altra Rivera from runningwarehouse using our own money. This did not influence the outcome of this review, written after running more than 50 miles in them.

Visit ShopRunningWarehouse.Com
This page contains affiliate links. As an Amazon Associate I earn from qualifying purchases.
WHERE TO BUY
LOWEST PRICE
$91