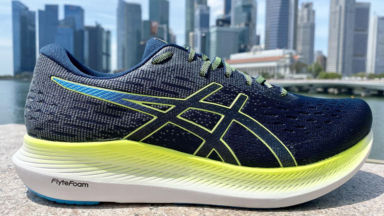 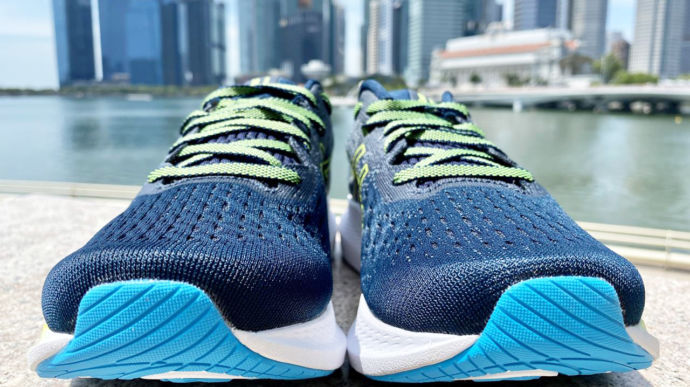 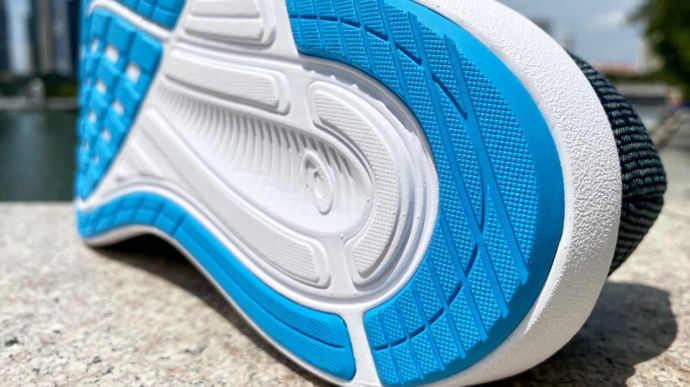 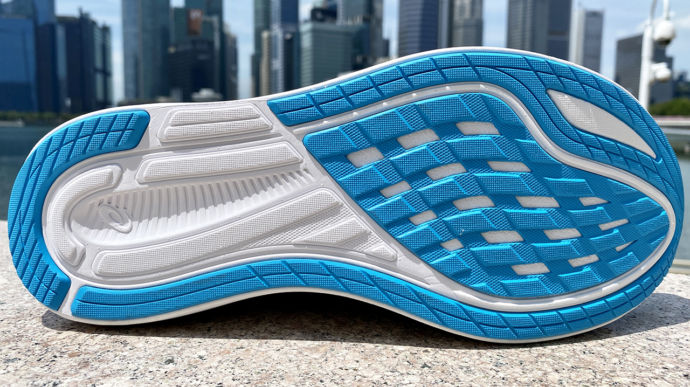 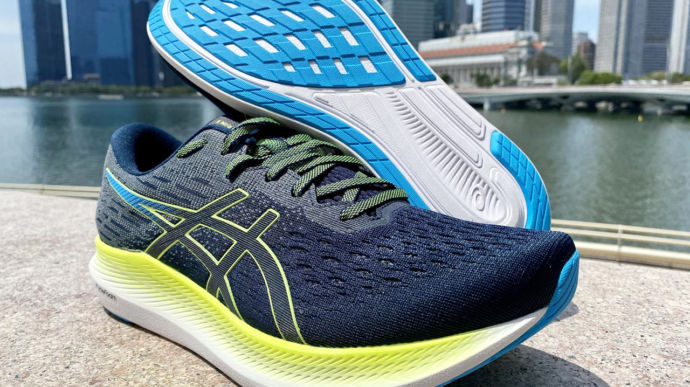 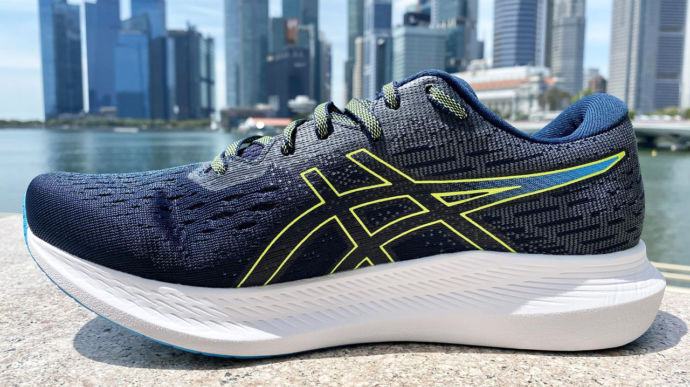 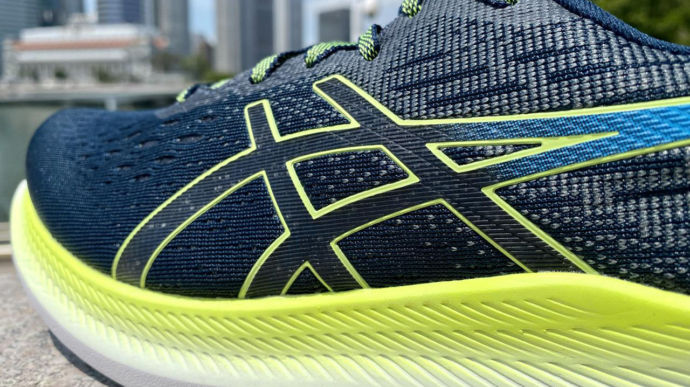 The ASICS EvoRide 2 is a speedy daily trainer with a distinct forefoot rocker that’s best suited to steady paces or faster.

It represents excellent value because you get the feel of a carbon fibre shoe without the harshness of a carbon plate.

The EvoRide 2 has been updated with a thicker, softer midsole which makes it more suitable for long distances and a new outsole configuration that makes the ride smoother.
WHERE TO BUY
LOWEST PRICE
$89
SHOE INFO
Asics
Brand
EvoRide 2 Review
Model
Cushioning
Type
8.5 oz. (241 gr.)
Weight
120 US$
MSRP
5 mm
Heel Drop
Evoride
Previous model
WHO IS IT FOR
If you’re looking for a cushioned, uptempo trainer that offers assistance in picking up the pace, the EvoRide 2 is an excellent option.
Help me choose

We are in the golden age of running shoes and there are so many good options to choose from.

However, it’s not enough to just be a good running shoe: it needs something to stand out. A lot of companies are using energy as a differentiator.

In some cases, the energy return can come from both the foam and a plate.

In the case of the EvoRide 2, ASICS markets it as an energy conserving shoe. This is done through its very distinct, pronounced forefoot rocker.

By having an upward curved sole at the forefoot, the overall load is lessened.

In the Ride collection, the EvoRide 2 is the lightest and the cheapest of all three models. It’s a daily trainer which is built for speed, unlike its bigger, bulkier brothers which are built for comfort.

So what’s new on the EvoRide 2?

It has been updated with a new midsole which is made of softer Flytefoam and 2mm more of stack height.

It also has a modified outsole and a new upper. It has lost weight over its predecessor and it has a wider base which should make it more stable.

So does the EvoRide 2 do enough to stand out from the crowd of good running shoes in 2021?

I’m not usually that excited about the second iteration of a new shoe because the brands normally only make small tweaks like updating the upper.

When I saw that the EvoRide 2 had a new upper, midsole and outsole, my interest was piqued tenfold.

I didn’t like the design of the EvoRide 1. It was very plain and didn’t look like a “fast” shoe. On version 2, the midsole is more sculpted and I really like the section of the midsole that flares up at the midfoot.

On my first run, I took the EvoRide 2 out for a speed interval session and its performance was outstanding.

It didn’t feel like a fast shoe during the warmup but once I got up to speed, I was able to hold it there really easily.

Tempo paces between 3.30 and 4 minutes per kilometer felt effortless because of the pronounced rocker and the midsole that doesn’t have much sink-in.

The EvoRide 2 has a much more forgiving ride than the Metaracer.

The EvoRide 2 is like a Jekyll and Hyde shoe.

As soon as you pick up the pace and go faster than 5.30 per kilometre, the EvoRide 2 comes alive. When going fast and you’re leaning forward to engage the rocker, the shoe really propels you forward.

The EvoRide 2 doesn’t like you running easy paces in it. It begs you to go at a steady pace or faster. It behaves like a carbon-plated shoe behaves.

The midsole of the EvoRide 2 is made from only Flytefoam. This single-density setup makes the EvoRide transition very smoothly and consistently.

Flytefoam is the perfect ASICS foam for a shoe like the EvoRide 2 which is designed to go fast. It doesn’t have much sink-in with every foot strike which makes it very easy to pick up the pace.

Had ASICS used Flytefoam Blast or Flytefoam Propel, the EvoRide 2 would have been too mushy for faster paces.

There is plenty of cushioning in the EvoRide 2 with its revamped, softer midsole. I never once thought that the ride was too harsh and needed to be softer.

You could easily run a marathon in the EvoRide 2 unlike the expensive racing flat, the Metaracer.

The ride of the EvoRide 2 reminds me a lot of the speedy Metaracer: like a max version with more cushioning and more foot protection.

The outsole of the EvoRide 2 works really well in tandem with the midsole. It has rubber coverage that goes around the perimeter of the outsole except for a small section on the lateral midfoot.

Almost the entire forefoot is covered in rubber so you should be able to get decent mileage out of the EvoRide 2.

I like the fact that the forefoot is segmented so the shoe flexes easier and more naturally than if it were one thick slab of rubber like on version 1.

I found the outsole of the EvoRide 2 to be much more durable than the outsoles of the Kayano 27 and the Nimbus 23, especially on the high water areas, even though they all use AHAR+ rubber.

I ran in the EvoRide 2 right after it had rained and there was still a lot of moisture on the ground. It passed the traction test with flying colours.

ASICS doesn’t get enough credit for their uppers. It’s very rare that I have any problems with an ASICS upper and I generally find that they exude a level of quality which only Brooks can match.

The upper of the EvoRide 2 is made of engineered mesh. The upper is a little on the warm side because of all the padding around the collar and the tongue.

The tongue of the EvoRide 2 doesn’t really belong on an uptempo daily trainer like the EvoRide. It is generously padded like a max-cushioned trainer tongue and very similar to the tongues of the Nimbus 23 and the Kayano 27.

Unlike the Nimbus 23, the EvoRide 2 doesn’t have a gusseted tongue yet. It slides downwards during runs but not laterally because of its wide wings that hold it in place.

There is a hard internal heel counter which makes the heel feel very solid. The collar of the heel is very well padded and it did a really good job locking my heel in place.

The shoe fit me true to size and the overall fit was perfect.

As a daily trainer, the EvoRide 2 definitely does stand out. It ticks a lot of boxes: it’s fast, stable, and affordable.

The EvoRide 2 is a shoe that bridges the gap between a slow daily trainer and a speedy tempo shoe. It has the feel of a carbon-plated racer but without the harshness of a carbon plate.

One thing the EvoRide 2 doesn’t do very well is slow, easy paces because its forefoot rocker makes the ride feel awkward; it’s not a versatile shoe.

In an ASICS shoe rotation, it would be excellent paired with a Nimbus 23 or Novablast for easy days and the EvoRide 2 for when your legs feel good and you want to pick up the pace.

The EvoRide 2 has no major flaws: its upper is comfortable with a secure lockdown, its outsole rubber is durable and its midsole has enough cushioning to make long distances enjoyable.

We purchased a pair of Asics EvoRide 2 from runningwarehouse using our own money. This did not influence the outcome of this review, written after running more than 50 miles in them.

Visit ShopAmazon.com
This page contains affiliate links. As an Amazon Associate I earn from qualifying purchases.
WHERE TO BUY
LOWEST PRICE
$89
AVAILABLE ON SALE:Previous model $49