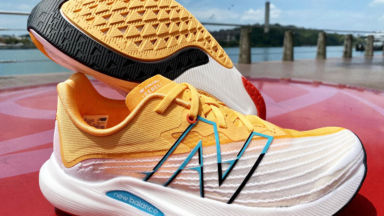 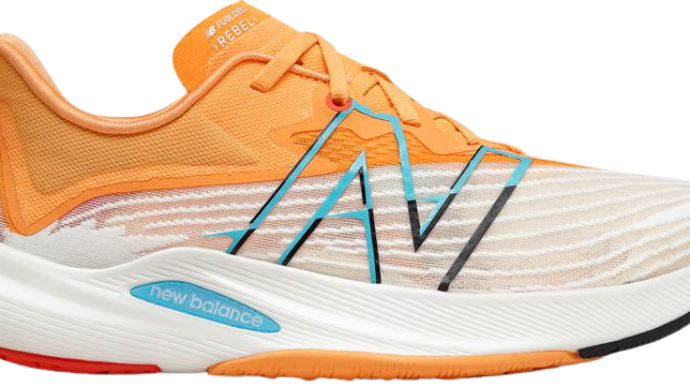 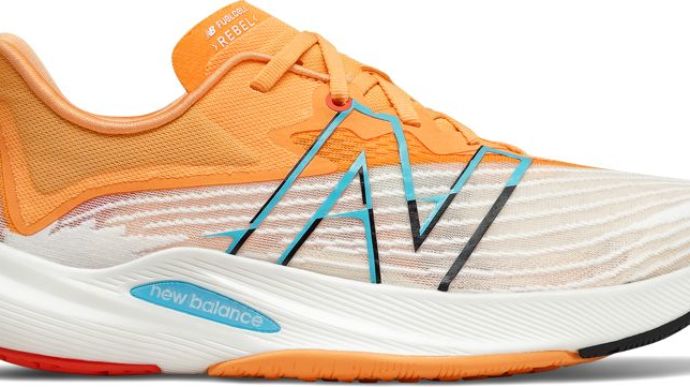 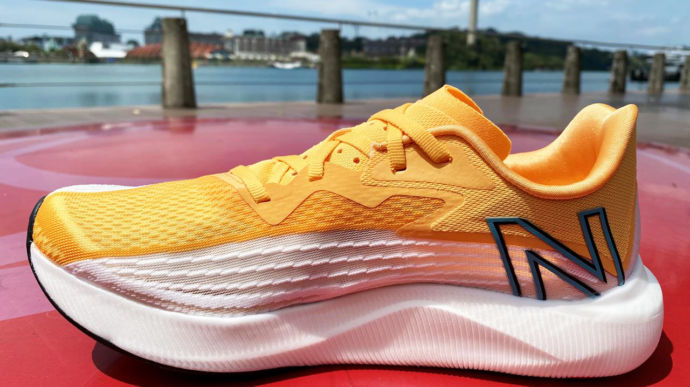 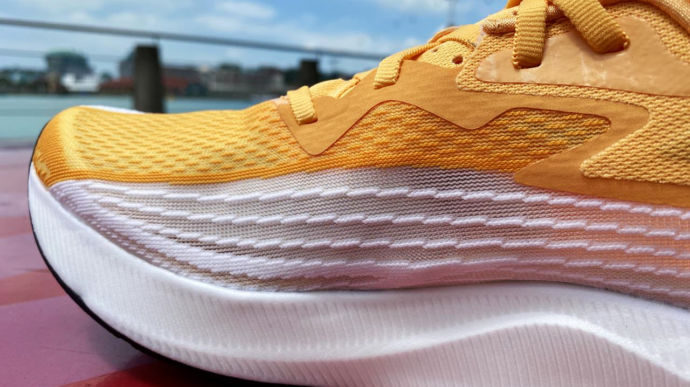 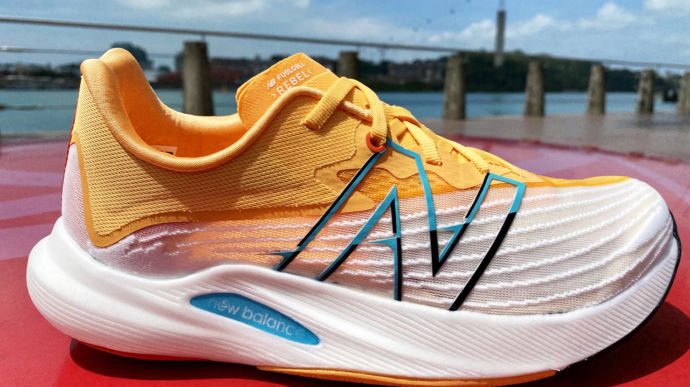 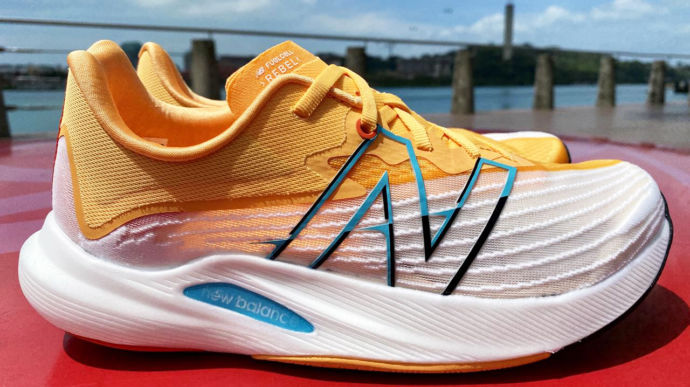 The New Balance FuelCell Rebel v2 is a lightweight daily trainer that's best suited to easy and steady runs. It has a super soft ride with good energy return.

Version 2 of the Rebel has been updated with a midsole that compresses more, is more flexible and has a softer outsole which makes the Rebel v2 more suited to slower paced, longer distance runs than V1.
WHERE TO BUY
LOWEST PRICE
$129
SHOE INFO
New Balance
Brand
FuelCell Rebel v2
Model
Lightweight
Type
7.33 oz. (208 gr.)
Weight
130 US$
MSRP
6 mm
Heel Drop
Fuelcell Rebel
Previous model
WHO IS IT FOR
If you’re a runner with good form looking for a really smooth, lightweight daily trainer with a very soft ride, the Rebel v2 is the perfect shoe for you.
Help me choose

It was a risk for New Balance to introduce another lightweight, tempo trainer into their performance running lineup.

They already had the Beacon and the Zante (now called the Tempo) but both of those trainers were built on the Fresh Foam template. The Rebel is a lightweight trainer that uses FuelCell as its midsole foam.

The risk paid off handsomely and the first version of the Rebel was a hit: it was light, snappy and more bouncy than its lightweight Fresh Foam cousins. Runners also loved its radical design with a unique lateral “wing”.

If you thought that New Balance was only going to make minor changes to the second iteration of the Rebel, you’ll be in for a surprise. The Rebel v2 has been revamped with a brand new upper, midsole and outsole.

Unlike the FuelCell Propel v2 which received an update that gave it a firmer ride, New Balance has done the opposite to the Rebel v2: it’s now much softer.

As a shoe reviewer, one of the most common questions I get is from runners asking me for suggestions to replace their beloved Nike Pegasus Turbo which has now been discontinued.

The Pegasus Turbo was a one-of-a-kind lightweight trainer because it was super soft and really versatile.

Most lightweight trainers have a firm ride which makes them only suitable for short, fast runs but the Pegasus Turbo could be used for longer runs as well as short, tempo ones.

On paper, the Rebel v2 has all the characteristics to be a good Pegasus Turbo replacement. Lightweight? Check. Soft midsole? Check. Highly flexible? Check.

So is the Rebel v2 a good replacement for the Pegasus Turbo 2 and how does it compare to the plethora of lightweight tempo trainers that currently exist?

I must be honest, when images of the Rebel v2 first leaked online last year, I wasn’t impressed. However, after seeing it in hand and in marketing material, I’m now a big fan of the design.

It’s one of the best-looking trainers I own and it somehow feels retro/nostalgic and modern at the same time.

I love the badge on the side of the midsole that transforms between “New Balance” and “FuelCell” depending on which angle you look at it. The Rebel v2 designers really need an award for the design of it.

On the first run, the Rebel v2 reminded me a lot of the ride of the RC Elite: it’s how I imagine the RC Elite would feel without the carbon plate in it.

I was surprised how soft the midsole felt. It was more like a max-cushioned trainer than a firm, lightweight, tempo one. The ride felt really smooth, natural and had a decent amount of energy return.

I found that the 6mm drop combined with the rocker geometry made it really easy to get up onto my toes and pick up the pace.

The Rebel v2’s midsole is highly compressible which makes it one of the softest shoes I’ve tested all year. It doesn’t have a lot of cushioning depth compared to a 1080v11 or a Clifton 7 but the foam feels more squishy.

I wouldn’t recommend the Rebel v2 for heavy runners because of how easily the FuelCell compresses.

I took the Rebel v2 on a 40 kilometre run on two occasions and its performance was excellent. It provided plenty of long-distance comfort and my legs felt great by the end of the runs. You could easily run a full marathon in the Rebel v2.

The super critical, nitrogen infused FuelCell provides really good energy return and makes it feel like a super foam. It’s not as bouncy as ZoomX but more bouncy than Hyper Burst, DNA Flash and Pwrrun PB.

To me, the Rebel v2 doesn’t feel like a tempo trainer because of how soft the midsole is and how flexible the forefoot is. It doesn’t have that snappy sensation that you usually associate with tempo trainers.

It maxes out at 4.30 per kilometre because of its soft nature. It feels best on easy runs or steady runs between 4.30 and 5.30 per kilometre when you’re still striking towards the forefoot of the shoe.

At slower paces below 5.30, the ride feels slightly unstable because of the shape of the midsole.

The midfoot and rearfoot are narrow compared to the forefoot. The outsole rubber placement also makes the shoe more suited to forefoot striking.

The entire forefoot is covered with soft, flexible rubber. The forefoot rubber extends down into the midfoot on the lateral side.

There is another patch of rubber placed on the midfoot of the medial side and on the heel. After 90 kilometres, the rubber has held up well but the exposed foam areas are a concern.

The areas of the rearfoot of the shoe that aren’t covered with rubber have shredded quickly because of how soft the foam is.

When I was running on tar and rearfoot striking, I could actually feel and hear the foam “catching” on the rough surface. It reminded me of having a large piece of chewing gum stuck to the bottom of the shoe.

The wear pattern on the Rebel v2 is really interesting. Normally I see the most wear on the outer lateral side of the heel but with the Rebel v2, most of the wear is on the medial side.

This is due to the lateral “wing” which flares out at the midfoot and forefoot and pushes your foot inward. This “wing” is not as prominent as on the Rebel V1 but it still results in medial side lean bias.

The midsole sidewalls are raised at the midfoot to provide some stability but I still think that heel strikers will find the Rebel v2 slightly unstable.

Outsole traction is above average because of how soft the rubber and exposed foam are. When striking the ground, the soft outsole presses down into the surface and provides a good “hold”.

The upper fits me true to size although it initially felt too short when I first tried it on in the store. When worn with a thin sock, true to size is perfect and there is enough space in the toe box for my toes to splay.

The fit is on the narrow side but I think most runners will be able to wear the standard D width without any problems.

It’s made from an engineered mesh which is light and airy so breathability is excellent. The white parts of the mesh are so translucent that you can see your sock right through it.

There is a small amount of padding around the collar and the heel but overall it’s a really minimal, light upper.

The lacing is asymmetric and it provides a secure midfoot lockdown. The flat, stretchy laces are slightly too long but not as long as Hoka laces which touch the floor when tied.

There are no last row double eyelets so it’s impossible to do heel lock lacing but lockdown is still superb and I experience no heel slippage.

The tongue is flat, wide and not gusseted. There is some downward tongue slide during runs but no lateral tongue slide. It has small holes punched into it to increase air flow and cool your foot down.

It’s a very comfortable upper which is unstructured and flexible but still effective.

The Rebel v2 follows the trend of lightweight, tempo trainers becoming softer and more suited to slower, longer runs. The Beacon V3, SL20.2 and EvoRide 2 have all undergone the same treatment.

The Rebel v2 doesn’t feel like a tempo trainer anymore because of how soft and flexible it is. All the shoes mentioned above are better shoes for speedwork.

The FuelCell TC is also a better tempo trainer than the Rebel. The Rebel v2 now falls into the daily training category.

For me, the Rebel v2 functions best as a daily trainer for middle distances at easy/steady paces between 4.30 and 5.30 per kilometre. It has a super soft, smooth ride with good energy return that makes it fun to run in.

The only weakness of the Rebel v2 is that its outsole areas which aren’t covered with rubber get chewed up by the ground so I don’t expect durability to be good.

We purchased a pair of New Balance FuelCell Rebel v2 from runningwarehouse using our own money. This did not influence the outcome of this review, written after running more than 50 miles in them.

Visit ShopNewBalance
This page contains affiliate links. As an Amazon Associate I earn from qualifying purchases.
WHERE TO BUY
LOWEST PRICE
$129
AVAILABLE ON SALE:Previous model $129