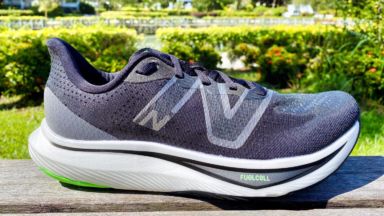 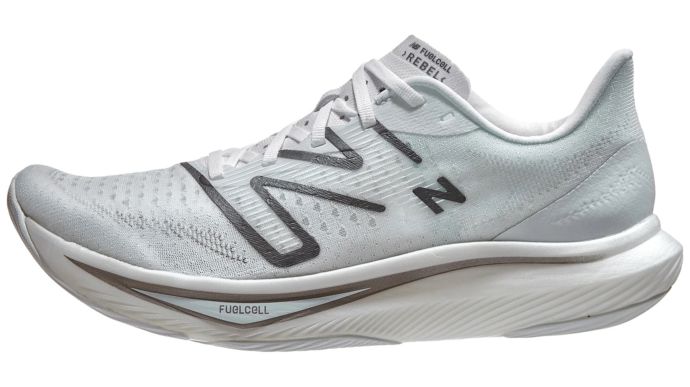 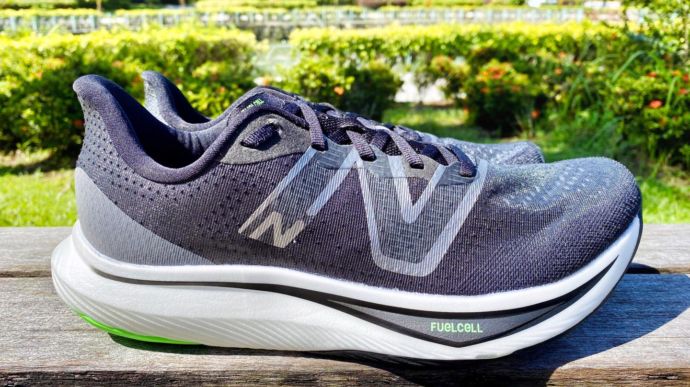 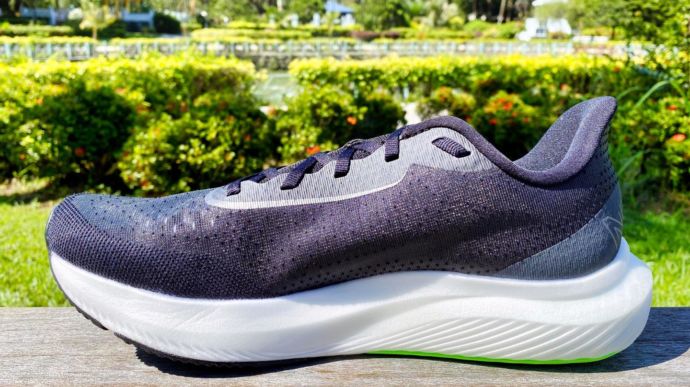 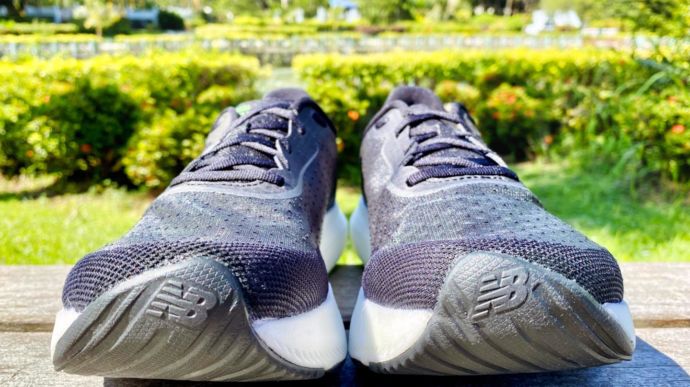 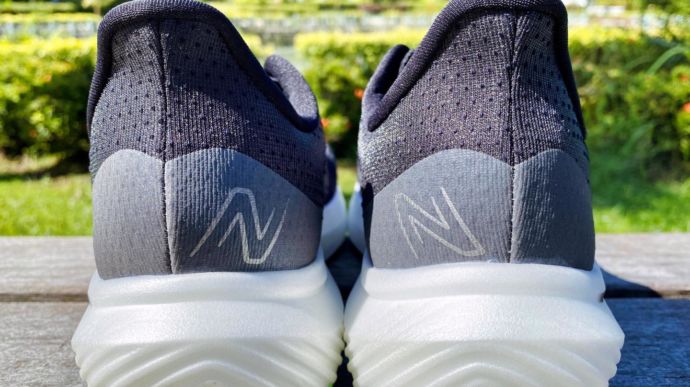 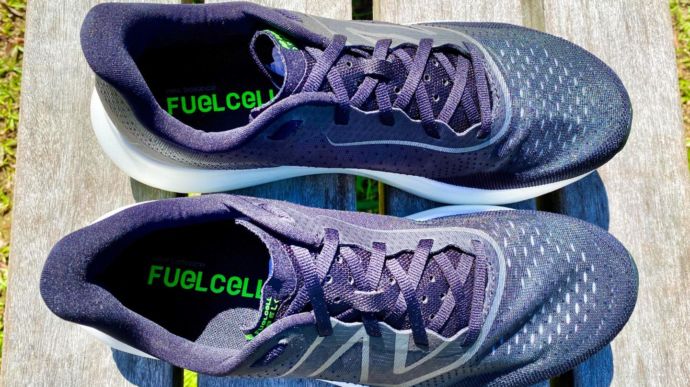 The New Balance FuelCell Rebel v3 is a lightweight daily trainer with a flexible forefoot. It has a super soft ride and can handle a wide range of paces. Version 3 has more outsole rubber for added durability, a thicker midsole for more cushioning and a wider base for extra stability which makes it a better daily trainer
WHERE TO BUY
LOWEST PRICE
$84
SHOE INFO
New Balance
Brand
FuelCell Rebel v3
Model
Lightweight
Type
7.40 oz. (210 gr.)
Weight
130.00 US$
MSRP
6 mm
Heel Drop
FuelCell Rebel v2
Previous model
WHO IS IT FOR
If you're a lightweight or middleweight runner who enjoys a super soft ride with lively transitions, the Rebel v3 is an excellent choice. The Revel v3 is a daily trainer which is fun and energetic but comes with lower durability than a regular work horse daily trainer.
Help me choose

The New Balance Rebel v3 is one of those trainers that just keeps getting better and better with each update. New Balance said that their goal with the new version was to make it appeal to a wider group of runners, to make it 10 – 15% more democratic.

The Rebel is a running shoe designed for runners who love soft-riding shoes. The juicy slab of FuelCell midsole foam compresses so much and so easily, even if you’re a light runner below 60 kilograms.

It’s an in-betweener trainer so it’s a daily trainer that can pick up the pace. Other trainers in this category are the Mach 5, the EvoRide 3 and the Pegasus Turbo Next Nature.

The Rebel v2 from last year was a shoe that I kept coming back to after I tested it. I found it cushioned enough for really long runs and such a fun shoe for daily runs because it was light, super soft and comfortable. It had a high level of ground feel and a really engaging ride.

One of the complaints that I had about v2 was that durability was very low. Due to the softness of the outsole, it got chewed up by the ground very quickly and very easily. It also had a very snug fit so I found the upper to be constricting.

Just like last year’s version, the Revel v3 has been updated from the ground up. It has a thicker midsole, a wide base and a new upper. It weighs 7.4 oz (210 g) which is slightly heavier than the previous version which came in at 7.3 oz (208 g).

When I saw videos of the Rebel v3 months ago, the thing that I was most excited about was the extra rubber on the outsole. For me, durability was the Rebel v2’s biggest weakness.

When I tried it on in the store, my normal size felt a bit short. A half size up felt much better. The Rebel v3 is slightly shorter than most running shoes so most runners will need to size up.

My first run was an easy 10K but it ended up being 20 seconds faster than I intended it to be. The Rebel v3 wanted to go fast. It didn’t feel as different from v2 as I thought it would feel. It felt a little bit more stable and slightly firmer but still very energetic.

The shoe that it reminded me of most was the Nike Streakfly which is also light and insanely soft. Both shoes have rides which are smooth, lively and natural but the Rebel v3 felt more stable than the Streakfly.

The best word to describe how the midsole of the Rebel v3 feels is “spongy”. The nitrogen bubbles inside the FuelCell foam make it feel light, airy and highly compressible. The speed at which the foam springs back to shape after being compressed isn’t as fast as Nike’s ZoomX or Hoka’s ProFly+ so the ride feels more relaxed.

It’s most suited to short and middle distance runs. When I did a 32km long run in it, I felt some toe discomfort in the last stretch because the forefoot lacks a bit of cushioning depth. Anything above 30 km and I’d pick something with a bit more substantial cushioning, something with less ground feel.

It has a 6 mm drop which makes it more of a midfoot/forefoot striker trainer than a heel striker trainer because it encourages you to strike further forward- this makes it a great shoe for short tempo or workout runs if you prefer a plateless trainer for speedwork. I find the flexible forefoot of the Rebel v3 a little too relaxed; I crave something stiffer with a plate for speedwork.

All 3 versions of the Rebel have a midsole geometry which pushes your foot onto the medial side during transitions so with the Rebel v2, I noticed a lot of wear on the rearfoot medial side, especially in the area not covered with rubber.

The Rebel v3 now has a long rubber strip which extends from the heel all the way to the midfoot on the medial side. This is the best update of the Rebel v3 and it improves outsole durability drastically.

On the forefoot, the rubber panel is different and it makes the ride firmer. There are no longer triangular cutouts in the rubber so the squishy foam can’t push through the holes when the forefoot is loaded.

Traction is acceptable in wet conditions but not amazing because the rubber is flat and there are no protruding lugs.

The Rebel v3 has a similar mesh to version 2 but it’s not as translucent. It has a rough texture and doesn’t stretch so it feels more like a racing shoe upper than a training one. Breathability is excellent and overall comfort is very good.

The tongue is flat and gusseted and it lays perfectly on the top of your foot. The lacing area is extremely comfortable and I really like the flat, wide laces. There’s a small amount of padding in the collar and heel lockdown is magnificent without a runner’s knot.

Just like the Rebel v2, going true to size will be a really snug fit so I suggest going up a half size. This is one of the rare shoes I’ve tested which I needed to size up. Going up a half size will provide a spacious forefoot and toe box for long training runs.

There’s a big reflective panel on the heel so the Rebel v3 is great for early morning or evening runs. Double first row eyelets are now included so you can use a runner’s knot- this was missing on the first two versions.

The Rebel v3 feels even more like a daily trainer than v2. It has improved durability, a more stable ride and a little bit more cushioning. I think New Balance achieved exactly what they were aiming for: a trainer that appeals more to the mainstream.

You can now replace your Pegasus, Cumulus or Ghost with the Rebel v3 if you’re willing to accept a lower level of durability and stability. You’ll get a much more energetic, much more fun ride with more ground feel.

I feel that the Rebel v3 has lost a bit of character. The first version was designed to be a lightweight, uptempo trainer but with each version it has become thicker, more cushioned and more similar to a daily trainer.

Even though it has lost some of its original DNA, I’m still happy about the direction that New Balance has taken with it because I make more use of it as a daily trainer than a speedwork trainer- it doesn’t have the snappy punch that I like in a speed trainer.

As a daily trainer, the Rebel v3 has been improved. It has more outsole rubber for extra durability, a wider base which makes it more stable and a little more cushioning for longer distance runs so I’d definitely pick v3 over v2 given the choice.

Overall, there isn’t a massive difference between the 2 versions so if you want to buy v2 at a heavily discounted price, you have my blessing.

As editorial policy, we do not accept free samples from companies.
We purchased this pair of New Balance FuelCell Rebel v3 at Running Warehouse with our own money.

Visit ShopRunningWarehouse.Com
This page contains affiliate links. As an Amazon Associate I earn from qualifying purchases.
WHERE TO BUY
LOWEST PRICE
$84