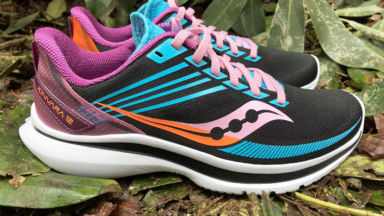 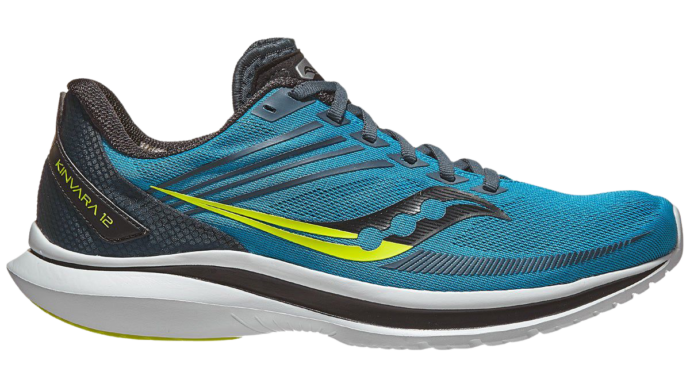 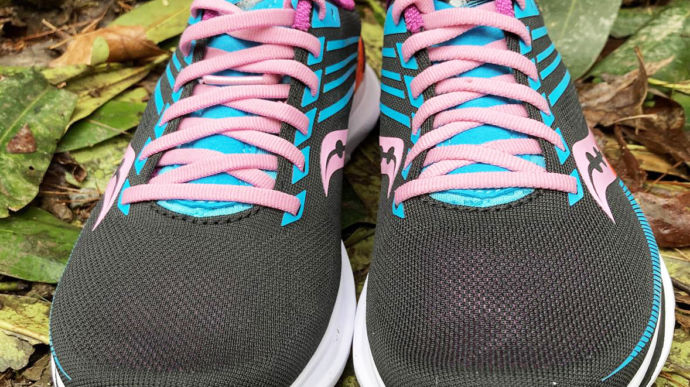 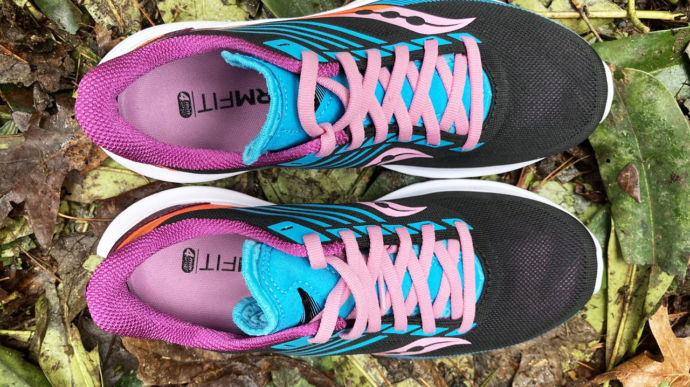 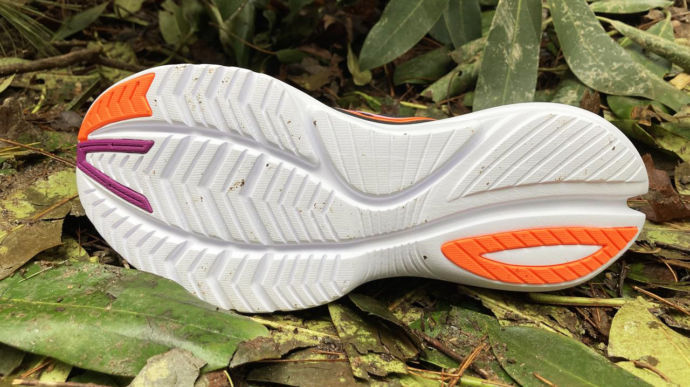 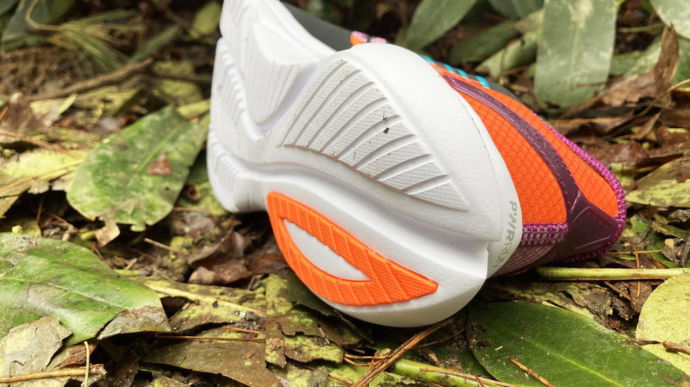 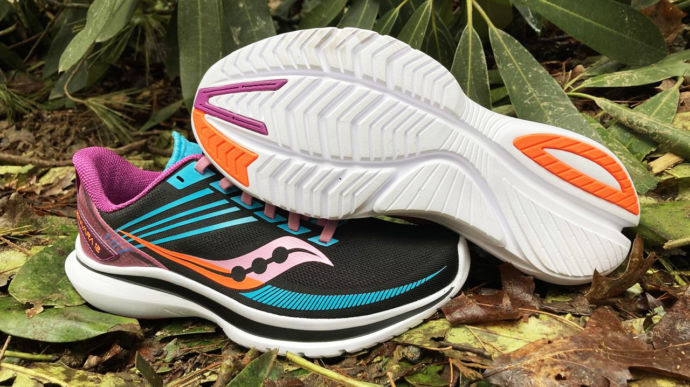 The 12th iteration of the Saucony Kinvara doesn’t deviate in any major ways from the Kinvara lineage: it’s still a supremely reliable, lightweight and responsive shoe that can handle long miles.

If you appreciated the Kinvara 9, 10, or 11, you’ll probably like the 12, as well. The most loyal Kinvara devotees will be able to detect a slightly firmer ride and a barely-noticeable reduction in the weight of the upper.
WHERE TO BUY
LOWEST PRICE
$21
SHOE INFO
Saucony
Brand
Kinvara 12
Model
Cushioning
Type
7.5 oz. (213 gr.)
Weight
110 US$
MSRP
4 mm
Heel Drop
Kinvara 11
Previous model
WHO IS IT FOR
Like previous models, the Kinvara 12 is versatile and feels good on any and every run, from easy shake-outs to long threshold workouts.

It performs well as a daily trainer, speed trainer, and long run shoe. The K12 is ideal for neutral competitive runners with a fairly efficient stride.
Help me choose

The Kinvara 12 maintains the same simplicity and style that we’ve come to expect from this shoe since it first hit the market in 2010.

Like previous models, the Kinvara 12 is versatile and feels good on any and every run, from easy shake-outs to long threshold workouts. It performs well as a daily trainer, speed trainer, and long run shoe.

The PWRRUN foam midsole that replaced Saucony’s EVA+ foam in version 11, returns for an encore in the Kinvara 12, although the shoe is definitely a bit firmer than in years past.

Saucony’s design team makes a big first impression with the Kinvara 12’s colorways. The pair I received was Future Black. (In the future, black is actually colorful). I love the bright, but subtle flashes of color.

The excitement I felt about the sleek and professional looks faded when I put them on and realized they are definitely a half size larger than usual.

I have been running in and reviewing Kinvaras for about 8 years, and this version definitely runs large, both in length and width.

I even compared them to a pair of the Saucony Triumph that I have in my rotation, and they are visibly longer even though both shoes had the same size printed on the tag.

Once I finally had the correct size, I took the Kinvara 12 out for an easy run to get a feel for the ride.

No surprises there; like the previous three versions of the Kinvara, these required zero break-in and the ride was as smooth and responsive. I did notice right away that the K12 are slightly more firm than last year’s model.

The first difference I noticed in the Kinvara 12 midsole is the new shape. The PWRRUN midsole dovetails out from the heel of the shoe by several millimeters, mildly evoking the aesthetics pioneered by the Nike Vaporfly.

I mentioned the firmer ride of the Kinvara 12 as one of very few noticeable differences between the 12 and 11.

This very moderate increase in firmness does make the shoe feel more like a competition shoe, but I don’t think that it is actually more responsive than the Kinvara 10 or 11.

Like its predecessors, the ridge is as lightweight and responsive as ever.

Saucony’s PWRRUN platform returns in the Kinvara 12, retaining the additional 5.5mm of midsole foam that were added to the Kinvara 11 when PWRRUN made its debut.

PWRRUN continues to deliver on the Kinvara promise by striking the perfect balance between responsiveness and lightweight cushion. PWRRUN is the technology behind the smooth and responsive ride.

The FORMFIT topsole remains a staple in the Kinvara line and further enhances the contoured and comfortable fit of the shoe. The heel-to-toe offset is, and I expect always will be, 4 millimeters

The standard Kinvara outsole employs injection blown rubber only in strategic zones on the outsole to keep the weight of the shoe down while providing optimal durability and protection in areas where the highest ground contact occurs.

The Kinvara 12 retains this feature with blown rubber located only under the big toe and lateral heel leaving the rest of the midsole exposed to ground contact.

However, the PWRRUN foam has proven to be Saucony’s most durable yet, and I was able to get 350 miles out of the K11, so I expect the same for version 12.

Saucony continues to employ the chevron pattern in the forefoot outsole to provide appropriate flexibility and distribute shock evenly across the sole.

In the Kinvara 12, the pattern is updated to allow for graduated levels of flex depending on location.

In other words, the toe of the shoe is less flexible than beneath the ball of the foot where dorsiflexion takes place during footstrike.

The only downside to the Kinvara 12 outsole is the depth of the Guidance Lines.

My typical routes include a combination of asphalt road, gravel, and groomed limestone trails so the Guidance Lines in the outsole are always picking up small rocks.

Saucony corrected this issue in the K11, so it’s disappointing that the grooves of guidance lines were deepened once again.

It is incredible breathable which made for some cold toes as I tested the K!2 at the end of winter. Printed graphic overlays add some structure to the upper, but keep the shoe lightweight.

The upper in general doesn’t fit quite as snugly as in years past, but the toe box is the roomiest of any Kinvara to date.

Laces are flat, lightweight, and quite long. It seems that Saucony overcompensated for complaints of disproportionately short laces in the Kinvara 11.

Given the slightly wider fit of the upper, I had to pull the laces tighter than usual, so the added length really made them flop around on top of my foot when running fast.

The Kinvara 12 tongue is arguably the most premium feature of the shoe. The top of the tongue has a soft suede feel while underneath, subtle padding protects the dorsal arch of the foot from tight laces.

The gusseted tongue luxuriously hugs the foot in place.

I wish Saucony could have carried the design principles of the tongue over to the exterior of the heel cup.

Unlike the softness and gentleness of the tongue, the exterior of the heel is overlaid with a thick strip of rubber material that is supposed to provide a pull-tab to help get the shoe on your foot.

This plastic tab is actually very difficult to grip and essentially serves no purpose other than to add unnecessary weight to the shoe.

Until the Endorphin series, Saucony’s Kinvara reigned supreme as the brand’s most recognized contribution the running shoe market for good reason.

The K12 is very much in keeping with the lightweight, high-performing comfort that runners have come to expect.

While it no longer holds the top spot as a performance shoe in Saucony’s hierarchy, it provides an excellent option for budget-conscious runners in comparison to the Endorphin series.

I love the Kinvara 12 for every kind of run from shakeouts to long runs to up-tempo workouts.

This shoe can more than handle itself in a marathon, and the versatility is one reason I’ll probably always have a pair of Kinvara in my rotation.

We purchased a pair of Saucony Kinvara 12 from runningwarehouse using our own money. This did not influence the outcome of this review, written after running more than 50 miles in them.

Visit ShopRunningWarehouse.Com
This page contains affiliate links. As an Amazon Associate I earn from qualifying purchases.
WHERE TO BUY
LOWEST PRICE
$21
AVAILABLE ON SALE:Previous model $13