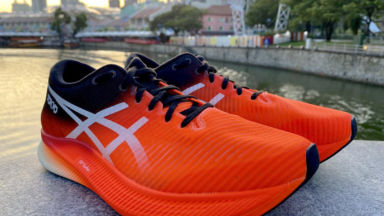 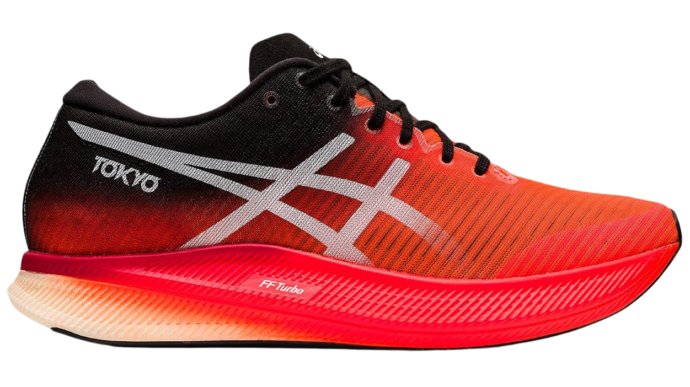 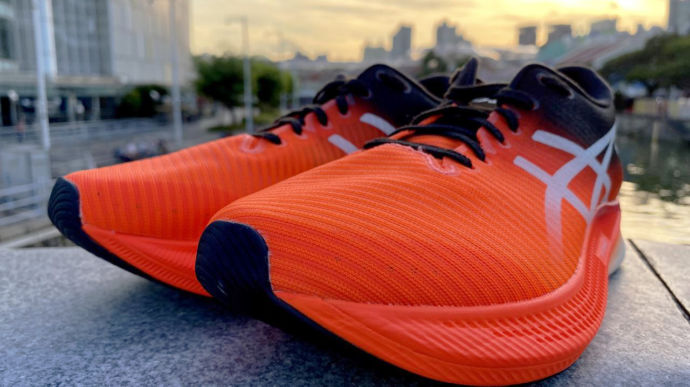 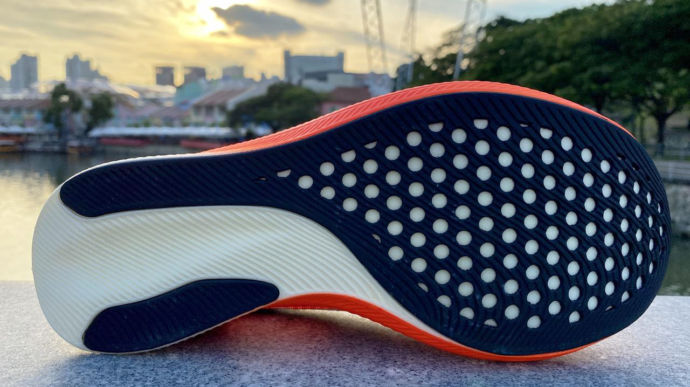 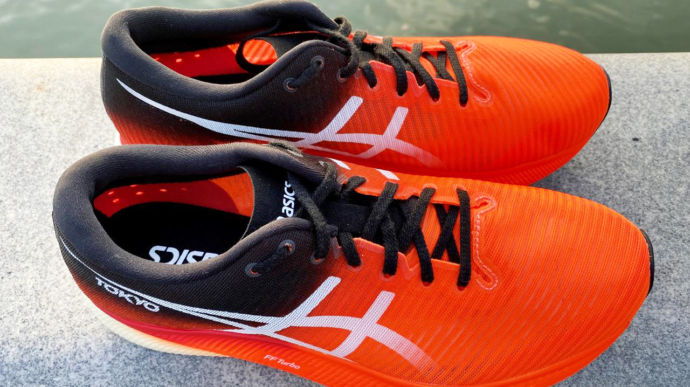 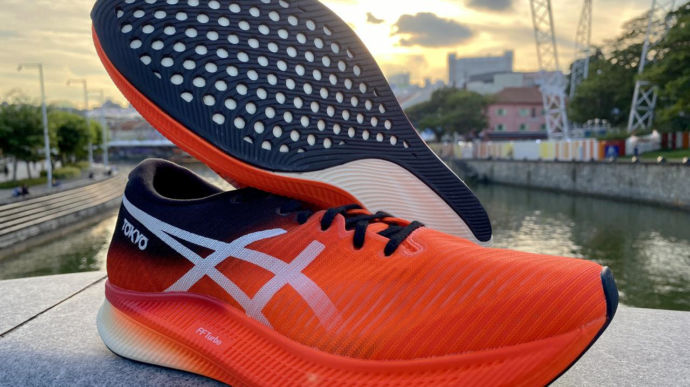 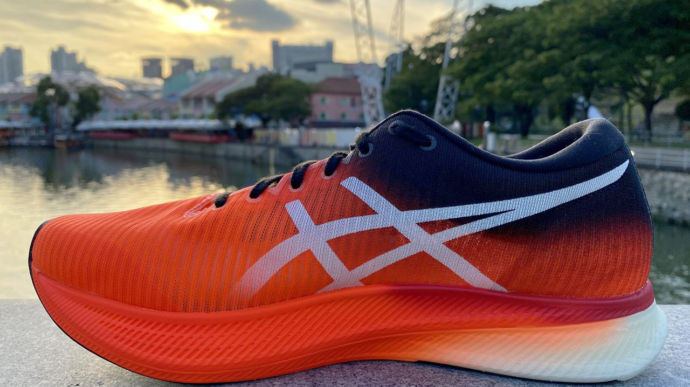 The ASICS Metaspeed Edge is a feather-light racing shoe with great ground feel and smooth ride transitions. The Edge helps cadence-style runners elongate their stride and control their pace.

Unlike its taller, heavier twin the Metaspeed Sky, the Edge doesn’t have as much cushioning or aerial bounce, making it better suited to half marathons and below.
WHERE TO BUY
LOWEST PRICE
$119
SHOE INFO
Asics
Brand
Metaspeed Edge
Model
Racing
Type
6.6 oz. (187 gr.)
Weight
250 US$
MSRP
8 mm
Heel Drop
WHO IS IT FOR
If you’re a cadence-style runner who is looking for a half marathon, 10 km or 5 km racing shoe, the Metaspeed Edge is a great choice.

It has a stable ride, a lightweight build and a natural ride that feels like you are in control of the shoe.
Help me choose

Last year, ASICS didn’t even have a marathon super shoe. This year, they have two.

The Metaspeed Sky and the Metaspeed Edge are carbon fibre twins that belong to the Speed Collection and the two bear a striking resemblance to each other.

In fact, they look so similar that it’s extremely difficult to tell which one it is when a runner is wearing one of them right in front of you.

I reviewed the impressive Metaspeed Sky a couple of months ago and I was amazed at how much propulsion it provided from the combination of its aggressive carbon plate and its midsole geometry. It was one of the fastest super shoes I’ve ever run in.

Now you might ask why ASICS needs another carbon plated racer when the Metaspeed Sky is already so good?

The two super shoes are targeted at different types of runners.

I really like this tailored approach by ASICS to offer runners options instead of a one-size-fits-all approach like most brands when it comes to racing shoes. So then which ASICS super shoe is better for me?

Therefore my cadence increases by only 6% while my stride increases by 22% when I pick up the pace. Based on this calculation, I’m a stride runner so the Metaspeed Sky should be the shoe better suited to my running style.

So is the Metaspeed Sky really better suited to my running style than the Edge, and is the Edge as good a marathon racer as its taller, heavier twin?

Upon launch, there wasn’t as much hype surrounding the Metaspeed Edge as the Metaspeed Sky. The Edge was launched over 3 months later than the Sky and while the Sky was sold out instantaneously, the Edge was and still is widely available here in Singapore.

I think ASICS should have launched the Edge in a different colourway to the Sky. It lost some of its appeal because it looks identical to the Sky. Who wants to buy a new shoe that looks exactly like the old one?

The first time I picked up the Metaspeed Edge, I was astounded by how light it felt. At only 6.6 oz for a men’s US9, it’s the exact same weight as the Vaporfly Next% 2 and currently one of the lightest super shoes.

My first run was an interval speed workout. What stood out for me was how much firmer the Edge felt over the Sky because of the thinner midsole.

The other thing that stood out was how much less aggressive the carbon plate felt. It felt flatter and not as prominent as in the Sky.

I felt like I wasn’t getting as much assistance from the combination of the plate and the toe-spring as I got from the Sky: I had to put in more effort to increase my speed. The Edge felt more like a traditional racing shoe.

On the positive side, the Metaspeed Edge felt really stable, light, and had more ground feel than other super shoes.

I also felt like I had more control over the shoe than other carbon fibre shoes which try to control my running style.

After that first run, my calves didn’t feel stiff like they usually do after running in rigid carbon fibre shoes. This was due to the friendly 8mm drop.

The Metaspeed Edge has a firm ride compared to the other super shoes. It’s definitely firmer than the Metaspeed Sky, as well as the Adios Pro, Vaporfly Next% 2, RC Elite v2 and the Deviate Nitro Elite.

I think the Metaspeed Edge is actually better suited to half marathons, 10 km and 5 km races over the full marathon because of how light it is and its lower level of cushioning.

I did a 41 kilometre run in the Edge and by kilometre 22, I was wishing that it had some extra forefoot cushioning because the balls of my feet were feeling some discomfort.

While the Metaspeed Sky handles slower paces well because of its high level of cushioning, you have to go fast in the Metaspeed Edge for it to come alive.

At paces above 5 minutes per kilometre, the Edge feels like a very ordinary running shoe.

The Edge has the same midsole foam as the Sky which is Flytefoam Blast Turbo, ASICS’ latest and greatest foam. They say that it’s nylon based but it has an underfoot feel very similar to Nike’s ZoomX which is a PEBA foam.

The thin insole is glued down to the strobel layer so you won’t get any slipping and sliding. It’s very thin so it doesn’t add any cushioning and it makes it easier to go fast.

The full-length carbon plate in the Metaspeed Edge is extremely rigid and doesn’t flex at all.

Due to the thinner midsole, the plate doesn’t have such a deep slope like the Sky’s plate does so you don’t feel the curve under your forefoot as much.

It doesn’t have that powerful, lever-like launch forward from an aggressive plate. Instead, it has a more controlled force from footstrike to toe-off.

Stability isn’t something that you usually associate with carbon fibre racing shoes but stability in the Metaspeed Edge is very good.

It has a wide midsole base and a stack height which is relatively low for a super shoe so the Edge doesn’t feel wobbly when cornering.

I find ride transitions in the Metaspeed Edge velvety smooth and it makes it very easy to get into a rhythm. This is due to the single density midsole combined with the full ground contact outsole.

The outsole of the Metaspeed Edge is ASICSGRIP which is a soft, light rubber. Traction on dry and wet surfaces is excellent but it’s slightly less abrasion resistant than ASICS’ heavier rubber, AHARPLUS.

After testing the Metaspeed Sky, I noticed a lot of wear on the lateral side of the outer heel right at the back because the piece of rubber there didn’t extend far back enough.

The Edge has the exact same rubber placement as the Sky but I didn’t experience the same high wear on that part of the outsole of the Edge.

This means that the higher 8mm drop and the lower toe-spring of the Edge makes me strike further forward at the rear, directly on the rubber piece which increases the outsole durability of the Edge.

I still wouldn’t train in the Metaspeed Edge because of how soft and delicate the exposed midsole foam on the outsole is.

ASICS uppers are usually very close to being flawless but the Metaspeed Edge upper is a little rough around the edges, literally.

While the engineered mesh is very porous and lets a lot of air into the shoe, it’s a hard, scratchy material.

The inside is so scratchy that I noticed that it bites onto my socks and when I take the shoes off, the upper pulls at the sock fibres.

This is a shoe that you don’t want to wear with your expensive socks and you definitely don’t want to go barefoot in it. Another thing I don’t like is that the cotton laces feel cheap and start to fray after just a couple of runs.

The heel tab and collar lining are lightly padded and there is no hard heel counter to save weight so the heel is completely collapsible. I find foot lockdown to still be fantastic and there is no heel lift.

The short tongue has no padding at all. It does have wide wings to stop it sliding laterally but unfortunately it still slides downwards.

I also have to fiddle with the laces a lot when tying the shoe because making it too tight yields unwanted pressure through the thin tongue.

The benefit of having such minimal padding is that the upper doesn’t absorb much water. When it started raining heavily during a run, after the rain had stopped, the upper dried up very quickly.

At a half size up from my normal size, the fit of the Metaspeed Edge is perfect. The forefoot is accomodating and there’s plenty of room for my toes to splay in the toe box.

The fit is more like a training shoe than a snug racer and this is a super shoe that even wide footed runners should have no problems with.

The Tokyo launch colourway of the Metaspeed Edge has no reflectivity which tells us that ASICS sees it as a pure racer and not a training shoe.

The Metaspeed Edge was designed to be an alternative to the Metaspeed Sky but I see them more as complimentary shoes rather than direct competitors.

The Edge doesn’t possess the propulsive properties of the Sky, neither does it have enough cushioning for a full marathon.

For marathons, I prefer the Sky because it assists me more in increasing my speed. It’s also more energy-saving and efficient over long distances because of its rocker geometry.

For half marathons, I prefer the Edge. It’s lighter, firmer and it doesn’t have an excess of cushioning. I also feel like I’m in control over the shoe, rather than the other way round and this makes it easier to get into a rhythm.

The Metaspeed Sky has the “wow factor” that the Metaspeed Edge doesn’t have. The Sky feels like a super shoe rocket whereas the Edge feels like the more reserved, more conservative twin.

The Sky has more cushioning, a more prominent plate and a more aggressive rocker so I think that the Edge is not as good bang for your buck. The Sky also feels better at slower paces compared to the Edge which only works well at fast speeds so the Sky is the more versatile shoe.

If I could only have one, I’d choose the Metaspeed Sky because it has better value and I do think that the Sky is better suited to my running style. However, if you want a lighter, lower stack racer with more ground feel, the Edge is for you.

We purchased a pair of Asics Metaspeed Edge from runningwarehouse using our own money. This did not influence the outcome of this review, written after running more than 50 miles in them.