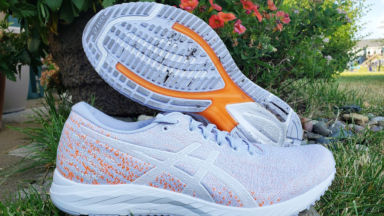 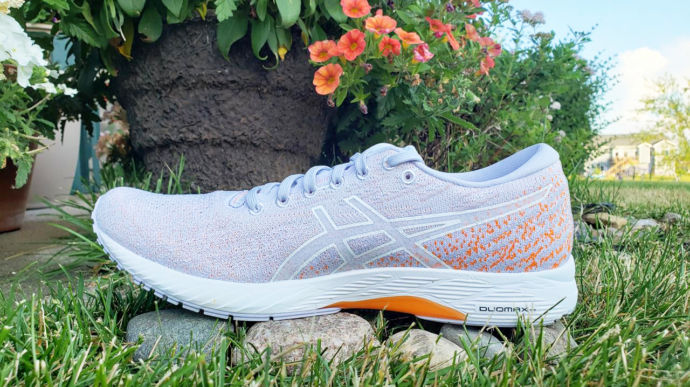 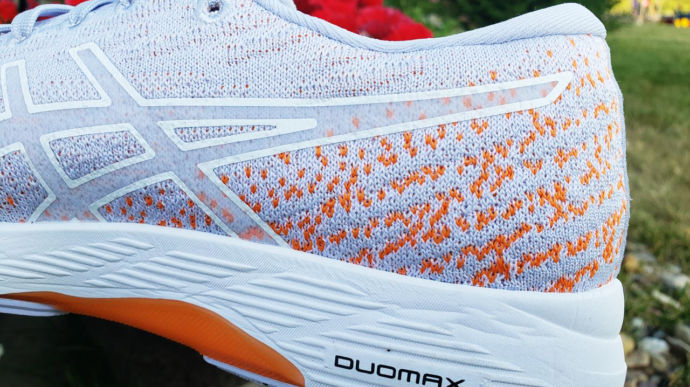 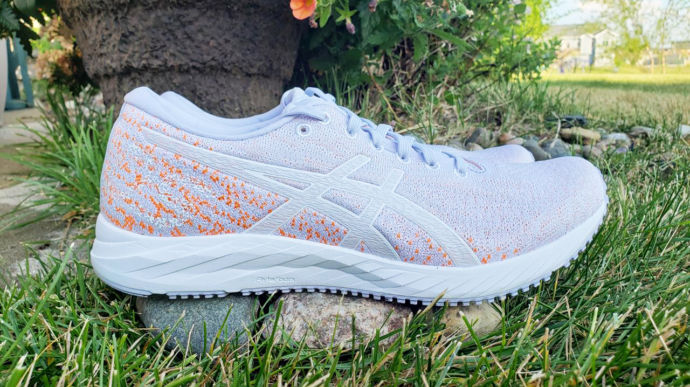 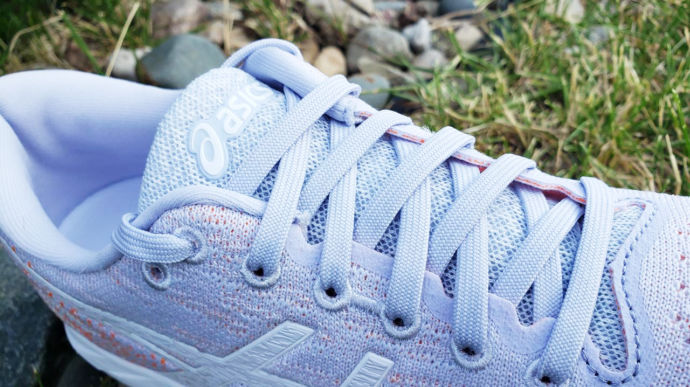 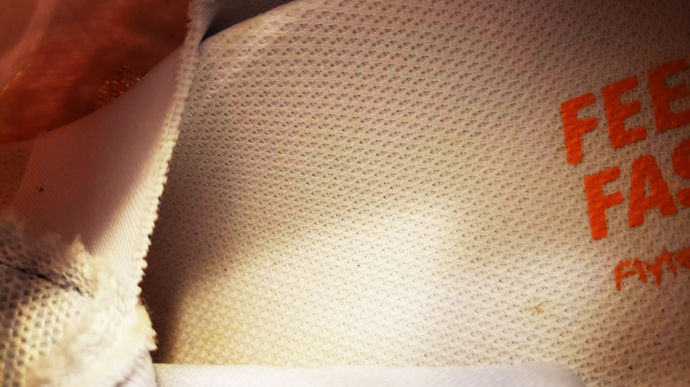 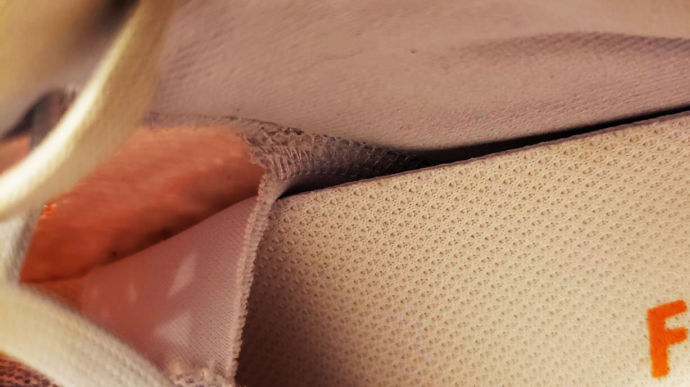 The ASICS Gel-DS Trainer 26 combines its unchanged, fabulous grip with a snug, comfortably-fitting knit upper that is now thinner and more breathable.

This shoe remains a top notch short-to-mid distance shoe geared toward speed, but it has moved a step closer to the “neutral” side and away from the “stability” side of “light stability” in this model due to a thinner heel cap.
WHERE TO BUY
LOWEST PRICE
$59
SHOE INFO
Asics
Brand
DS Trainer 26
Model
Stability
Type
99 oz. (2807 gr.)
Weight
130 US$
MSRP
10 mm
Heel Drop
DS Trainer 25
Previous model
WHO IS IT FOR
Runners with neutral feet and those needing a touch of stability will find the DS Trainer 26 well-suited to their track work and short to mid-distance faster-paced efforts.

Consider this your go-to-shoe for running on wet pavement or in hot weather.
Help me choose

Now in its 26th model, the DS Trainer is a quiet, steady heavy hitter for ASICS as their performance-oriented neutral to light-stability offering.

If you want one (non-plated) shoe perfectly suited to training for and racing 5k’s and (possibly) 10k’s and half-marathons, this is a great shoe to look at.

(I throw in the “possibly” because some may want more cushion and stability for longer training runs; keep it as an option for 10k and half-marathon, even marathon, races, though.)

Thank you, thank you, to ASICS for not changing this shoe’s sole unit since the 24.

The midsole continues to combine light, responsive cushion with a semi-stiff midfoot that holds steady right below the arch and then allows for a smooth transition onto the toes. I LOVE THiS SHOE’S GRiP!

Changes this time around center on a thinner upper, which shaves off just shy of a full ounce per shoe (.9 oz less in my women’s 9.5). The 26 is more breathable but snags more easily.

Note that there were some changes made to the SL20.2 from Adidas that make that version more neutral and less-similar to the DS Trainer 26.

As I got my first glimpse when opening the box, I liked the look of the thinner upper. Ahh, such a relief that the outsole appears unchanged! The shoe has an attractive, classy look, too.

Putting them on, I was doubly pleased that they did not mess with the snug fit. The first run (even the first step) brought immediate attention to the way this shoe grabs the ground throughout the second half of the foot plant.

ASICS has figured out the perfect outsole for a speed-oriented trainer! The run felt very similar to the 24, with the added benefit of it being more breathable.

The soul, I mean sole, of this shoe is outstanding.

The ride is smooth and snappy—imagine a turning track wheel on a huge excavator below your foot, not for the weight, but in how it keeps grabbing the ground and propelling forward.

The DS Trainer is designed for “runners covering shorter distances who want to go fast”; this sole is the meat toward meeting this end. There is a lot of technology in this sole unit, and we cover it all. Here we go!

Most of the midsole is made up of FLYTEFOAM®, which offers the right balance of cushion and responsiveness for speed shoes.

(This foam does not impress me in shoes meant for longer runs as it does not cushion my foot as well as adidas Boost, HOKA’s, or even Nike React.)

ASICS’ long-standing DUOMAX® runs along the medial heel to midfoot and is more firm to resist compression during pronation of the foot.

Below the DUOMAX® the shoe’s PROPULSION TRUSSTIC™ technology further bolsters the arch and runs below the center of the outsole, with support strips running up each side of the forefoot.

GEL® technology cushioning in the heel provides shock absorption, says the brand. While the GEL® is not visible as it is in the Kayano, there must be a patch under the center of the heel, as “GEL” is etched into the exposed foam.

Like previous models the foam peaks through multi-segmented AHAR rubber in the forefoot. These gripping strips also shape the lateral edge, with rubber pads around the heel and inside edge.

This outsole pattern provides superior grip! It covers high-wear areas to protect the midsole, but it is not over the rest of the base, to lower weight.

This long-time winner from ASICS holds steady at an 8 mm. drop again this year.

The revamped knit upper is about half as thick, which makes it more breathable. The upper knit is thinner by way of smaller strands of thread and a tighter weave.

It snags more easily. After 50 miles I had one spot on the forefoot that showed a few frayed strands, but this did not affect fit or performance.

The material is less flexible than the 24’s (which I believe is similar in the 25), but this allows for eliminating the reinforcement strips in the forefoot that were present in the 24 to maintain structure.

The 24 and 26 are similar in snug, supportive fit except for the heel counter, which is also thinner in the newest edition.

This less-supportive heel, together with midfoot support, actually makes the DS Trainer 26 more like adidas’ SL20 than is the 24.

Adidas second run of the shoe, the SL20.2, actually removed the midfoot torsion system, which moves it further “neutral” and less like the DS 26 than SL20’s first rendition.

The tongue is comparably thinner as well, but this year it is connected to the upper on both sides with stretchy bands about an inch wide.

I still had the tongue fold together as I tightened the laces because it’s just that thin, with some reworking necessary to get the right tension and alleviate hot spots caused by a bunched-up tongue.

The sock liner is a touch thinner from past models, but it curves up around the outside of the foot and heel noticeably more than it does in the 24.

I don’t notice this while running, probably because of the thinner upper and heel counter overall.

I actually didn’t notice the minimized heel counter until I had many miles on the shoe. After multiple days, my heels started aching in their tell-tale way that says “this shoe needs more heel support!”

Sure enough, I can feel the difference when I squeeze and push against the heels of the 24 and 26.

I can’t quite tell if the heel counter of the 26 is slightly thinner or if it simply moves more because the upper material around it is thinner, but I suspect that ASICS shaved a touch of weight off in the counter itself.

This is a fun shoe to run in and feels fast. The shoe is snug yet slightly flexible enough to accept yet still support my foot—that’s a win! The sole unit continues to impress: no complaints here.

I like the fact that the shoe is more breathable and lighter, but it comes at the cost of the heel support that I need if I want to run multiple workouts a week in a shoe.

Overall I prefer the DS Trainer 24 to the 26, but I can keep the 26 around for fast-paced efforts in the heat.

The thing that wows reviewer after reviewer is the grip on these DS Trainers. Have you given it a try?

We purchased a pair of Asics Gel DS Trainer 26 from runningwarehouse using our own money. This did not influence the outcome of this review, written after running more than 50 miles in them.

Visit ShopAmazon.com
This page contains affiliate links. As an Amazon Associate I earn from qualifying purchases.
WHERE TO BUY
LOWEST PRICE
$59
AVAILABLE ON SALE:Previous model $69