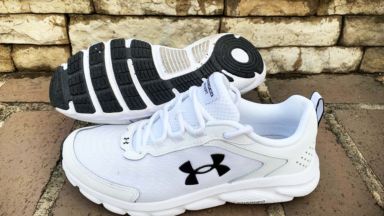 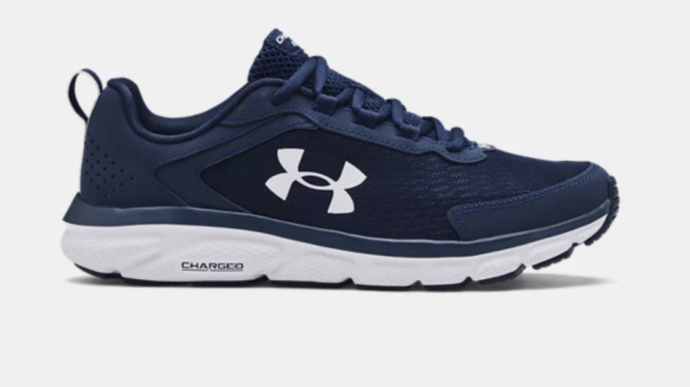 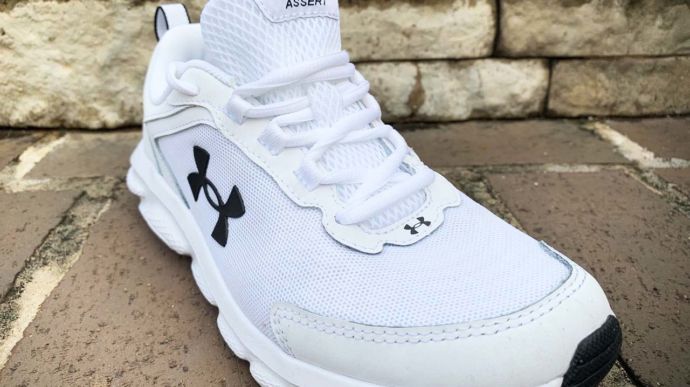 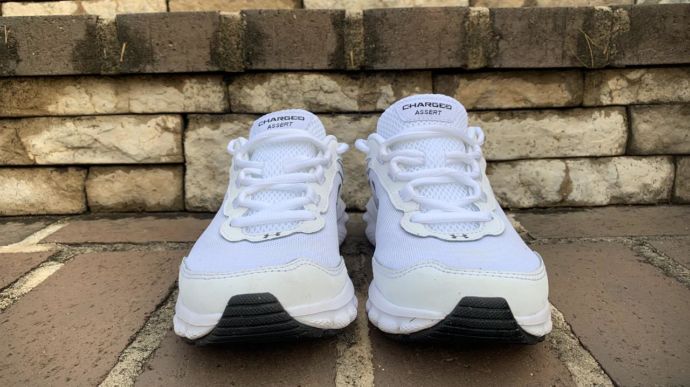 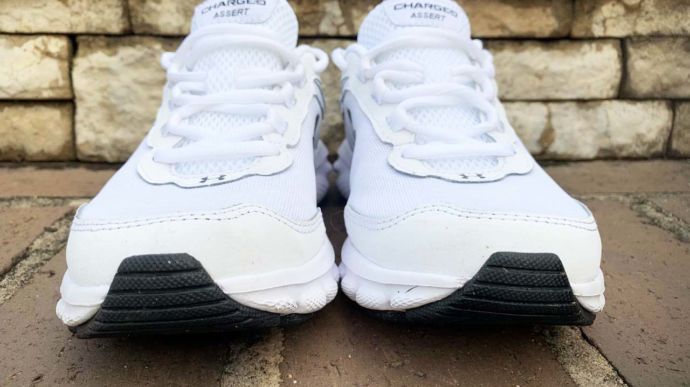 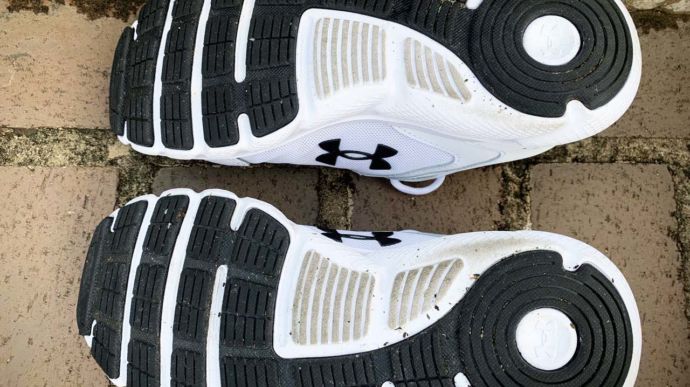 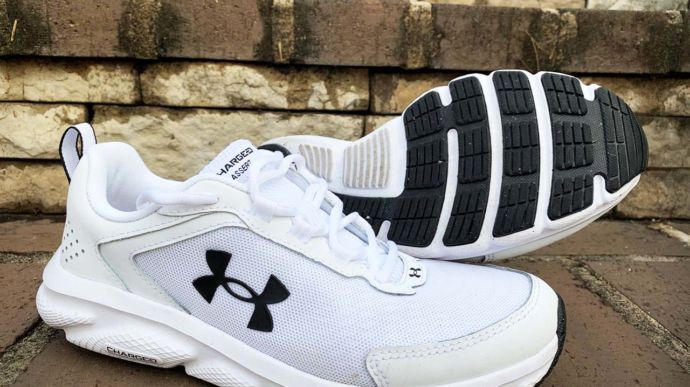 The Under Armour Charged Assert 9 is a solid choice for a cross-training shoe. This shoe allows for them to be used for multi-purposes such as short jogs, walks, lifting sessions, and speed and agility workouts.

For the price and the many hats, this shoe wears I would recommend it to anyone.
WHERE TO BUY
LOWEST PRICE
$36
SHOE INFO
Under Armour
Brand
Charged Assert 9
Model
Cushioning
Type
9 oz. (255 gr.)
Weight
70 US$
MSRP
10 mm
Heel Drop
WHO IS IT FOR
This shoe is for the person who is looking for a cross-training shoe. It’s by no means a running shoe. It’s a budget-friendly shoe that will help you get your workouts done with comfort and style.

This shoe would be a great addition to someone’s rotation to wear when in the gym or just for casual everyday wear.

The overall quality and durability aren’t much to talk about, but I guess you get what you pay for.
Help me choose

The Under Armour Charged Assert 9 is a training shoe that was built for neutral foot strikers that need flexibility and cushioning. This shoe allows you to wear it for many different occasions.

Under Armour claims that it was made to be a running shoe, but I would have to disagree with that statement. Don’t get me wrong, you can run in them.

It’s a very comfortable shoe that will be perfect for those shorter runs. I would recommend wearing them for nothing over the 5k distance. I highly recommend this shoe for cross-training.

I tested the Under Armour Charged Assert 8 and there hasn’t been too much change. The biggest update would be to the upper.

The overlays are slightly different over the midfoot. This gives the updated shoe a tad different feel. The Charged Assert 9 doesn’t offer you a ton of new technology.

Other than the minuscule upper change the shoe is almost the same.

It reminds me of the Under Armour Charged Impulse. When compared side by side they look very similar to one another.

The Charged Impulse does include many of the same technologies as the Charged Assert 9 such as the Charged cushioning but has a minimal rubber outsole and full mesh upper.

I think for the price of around $70.00, that it’s very reasonable. They weigh in at 9 oz, which is a little heavier than the previous model and has an offset of 10mm.

It’s not an over-the-top fancy shoe but it’s everything you would need for a multipurpose shoe that allows you to use it for various occasions.

A few months ago I tested out Assert 8’s so I knew what to expect. I did anticipate some updates, but when I opened the box I was surprised to see almost no change in the updated version.

They look almost identical to the Charged Assert 8’s. I received the all white model and man, are they white! Almost too much white.

They do offer the Assert 9’s in a few other colors such as all white, black, gray/white, halo gray /white, pink /white, and black/white.

I know Under Armour isn’t known for their fancy colors or patterns but I think they could be a little more creative with adding some flair to their shoes.

Color is just an aesthetic and definitely doesn’t hinder the shoe’s ability to offer a great deal of comfort right out of the box.

When I first put them on I noticed right away how stable my feet felt and the plush all over cushioning.

I have been wearing the Charged Assert 8’s a lot lately and when I put the 9’s on for the first time I couldn’t really feel much of a difference. The only difference I felt was the placement of the overlays and the tongue.

My first training session I did in the Under Armour Charged Assert 9’s was a hill workout on grass. I had no major complaints but a few minor ones.

I noticed my feet slipping a bit and did have some rubbing on the outside of my ankles near the collar of the shoes. I have worn them for many hours since and those problems are not deal breakers for me.

The sole unit of this newer model is identical to the Charged Assert 8. It’s made for individuals that have a neutral foot strike. It has Charged Cushioning throughout the midsole.

This is Under Armour’s signature technology. The cushioning gives you high-end shock absorption and energy return technology. It ensures less impact with each footstrike and greatly enhances bounce back.

You can expect reduced stress on your feet and joints as a result of this technology. I have worn these shoes for a workout in the morning and kept them on for the rest of the day for errands.

I can attest that this technology does indeed do everything that it claims to. Along with the Charged Cushioning, they offer an EVA sock liner that adds to the cushiness of the shoe.

The outsole of the shoe is made from solid rubber. The rubber does not cover the entire sole of the shoe. This rubber is intentionally placed in areas of the sole that are heavily used.

This gives your foot durability and traction without adding extra weight. Deep and shallow flex grooves are found between the midfoot and forefoot, which make the platform very flexible.

I tested these shoes out on various surfaces such as grass, turf, track, rubber gym flooring, and pavement. I had no problem with grip on any surface.

When I first reviewed the Assert 8, I was testing them out as a running shoe but when I look at the Assert 9’s for a training shoe I value what they bring to the table. This shoe can be run in with no problems.

I just believe that they are not for distance running. They are a fantastic choice for a training shoe. I absolutely love wearing them for all my speed and agility workouts as well as just lifting sessions.

The upper is almost a spitting image of the Assert 8. It’s made up of a lightweight mesh material. It’s not as soft as most mesh uppers but it does keep your feet ventilated and cool.

This mesh material covers from the midfoot to the toe box area. The mesh has a thin plush liner that is located on the inside of the shoe. This adds to the plush all-over comfort this shoe gives.

The tongue is one area of the upper that they have changed up from the past model. It still has a good thickness to it but the material is different.

I would have to say that this material is of lesser quality and I would prefer the Charged Assert 8’s tongue.

The rest of the shoe is made up of durable leather overlays. These are strategically placed to add stability and lock in your midfoot. They are located around the heel cup, the lacing box, and a small area of the toe box.

The heel cup of this shoe wasn’t built up too much and didn’t offer any frills, but it did get the job done and for the price of this shoe you can’t beat it.

The lacing system allows for you to have many options for lacing up your shoes. The laces are round and I had no issues of them coming undone if I double knotted them.

I had plenty of room in the toe box for my toes to splay when planting, jumping, running, or cross-training, The Women’s UA Charged Assert 9 fits true to size and has a standard B width.

To accommodate for a wider foot, I would order a half size bigger. This updated version does come in a wide (D) size too, but only has one color choice to choose from.

My conclusion on the Under Armour Charged Assert 9 is an overall positive one. You can’t beat this shoe for the little dent it will cause in your wallet. It should not be categorized as a running shoe.

It’s hands down a training shoe and I loved it for that purpose. My favorite time to wear this shoe would be when I was doing a circuit training session.

I would do a few lifting exercises followed by a sled push or short sprints. Not only did I enjoy this shoe for training purposes but also liked wearing them with casual outfits.

The style and neutral color combinations allow for them to be worn on a variety of occasions. This is a fantastic choice if you are looking to find a shoe that can serve multiple roles for you.

We purchased a pair of Under Armour Charged Assert 9 from runningwarehouse using our own money. This did not influence the outcome of this review, written after running more than 50 miles in them.

Visit ShopAmazon.com
This page contains affiliate links. As an Amazon Associate I earn from qualifying purchases.
WHERE TO BUY
LOWEST PRICE
$36

Lives in Marietta, Pennsylvania with her husband, two kids, and dog. Olivia is a personal trainer and soccer coach. She has been running for 10 years and competes in various distances. For the past few years she has been concentrating on the ultra distances. She never would have thought that one sport would change her whole outlook on life like running has.