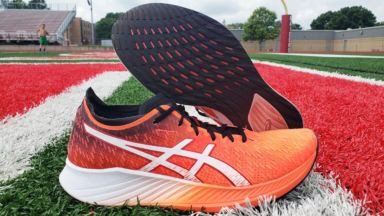 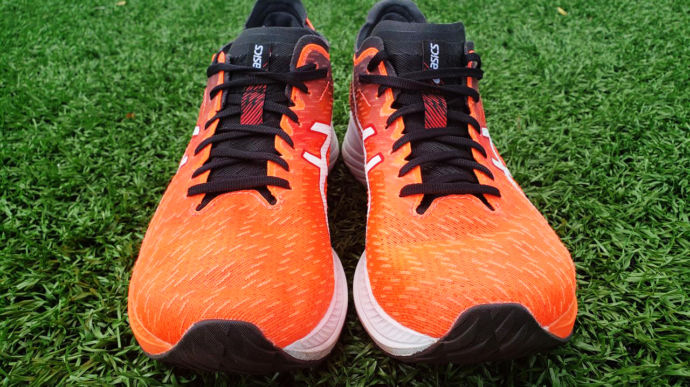 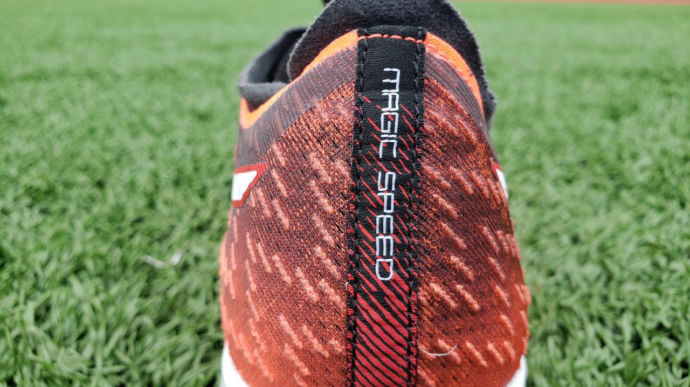 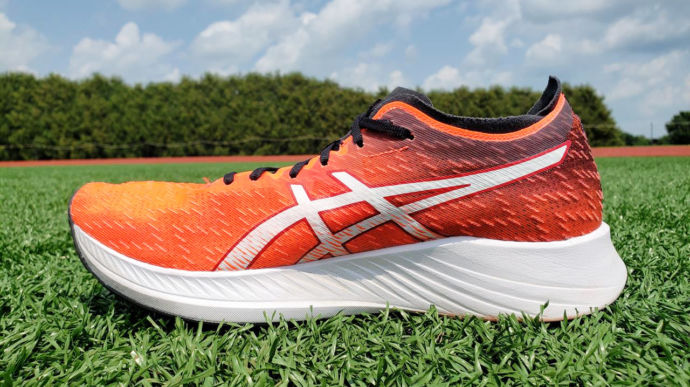 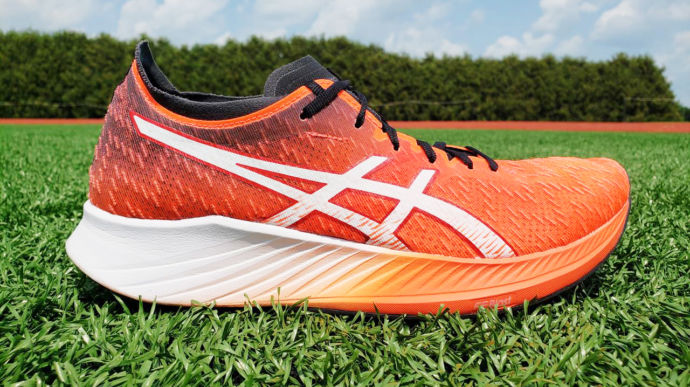 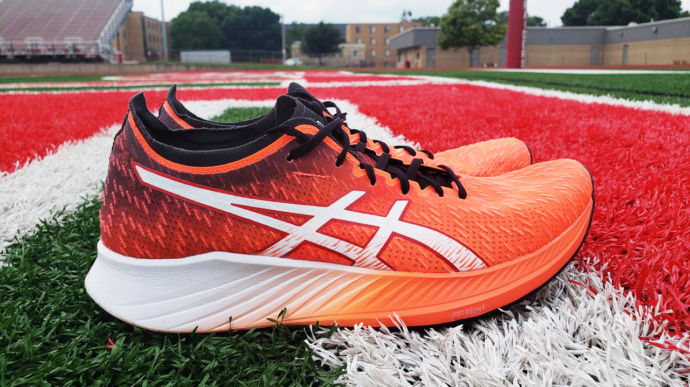 The ASICS MAGIC SPEED™ delivers on its promise of comfortable, lightweight cushion; it feels great striking midfoot or heel before rolling the runner forward quickly into toe-off.

This neutral shoe offers light stability from the half carbon plate in the front and meets an emerging demand for lower cost plated shoes that are versatile and durable enough for training and racing.
WHERE TO BUY
LOWEST PRICE
$83
SHOE INFO
Asics
Brand
Magic Speed
Model
Stability
Type
7.9 oz. (224 gr.)
Weight
150 US$
MSRP
10 mm
Heel Drop
WHO IS IT FOR
Casual runners to those who train hard and set serious goals—yet don't want to invest in high-end racing shoes—will appreciate the quality and race-ready feel of MAGIC SPEED™.

Neutral and light-stability runners will find this a great shoe for speedwork through distance runs but may want to use another shoe (perhaps an old pair) for more relaxed recovery runs.
Help me choose

The MAGIC SPEED™ is a variant off of the brand’s first plated shoe, the 2020 METARACER™. This second edition shoe was made with training and racing in mind.

It has a carbon plate only in the front half of the shoe, and comes with a higher stack and slightly higher weight than the METARACER™. Smile, runners; it also comes with a lower price tag, at $150 USD.

This is the lowest-priced plated offering from ASICS (and across the board) which also debuted the METASPEED™ Sky and METASPEED™ Edge in summer 2021.

These METASPEED™ shoes are variants of one another, built to enhance different running styles. The major difference between these two and MAGIC SPEED™ (besides $100 USD) is the midsole.

The METASPEED™ models also have a full-length carbon plate.

This FLYTEFOAM® Blast midsole in MAGIC SPEED™ was a huge hit in NOVABLAST™ and is combined with the GUIDESOLE™ technology from the METARACER™ to roll you immediately onto your forefoot. It’s fabulous.

The closest shoes to Magic Speed that I’ve run in include the following, each for different reasons:

The MAGIC SPEED™ is a hybrid trainer-competitor alongside the brand’s METASPEED™ Edge and METASPEED™ Sky which are tailored to specific running styles for high-end performance.

List price is $50 USD below the New Balance FuelCell TC which is a similar hybrid (TC stands for Trainer-Competitor) that sits below its brand’s RC Elite.

However, the $50 USD less-expensive MAGIC SPEED™ contains a light heel counter which is missing in the Endorphin Pro.

Saucony Endorphin Pro (and Speed) uses a curved plate that provides some spring to the runner’s step.

While the MAGIC SPEED™ has a half plate only in the front of the shoe which functions to roll forward quickly on its rigid forefoot plate that curves upward at the ball.

The Saucony models have an 8 mm. drop, like Adidas Adizero Pro, while MAGIC SPEED™ rolls forward with a 5 mm. difference which matches HOKA’s carbon shoe, the Carbon X, which uses a similar roll/rocker technology.

Adizero Pro side by side with Magic Speed

Grip: Adizero has better grip. Magic Speed grabs the running surface quite well; I have no complaints.

Side by side running in these two shoes, together with pulling each foot along the cement, reveals more grip in the Adizero, which is almost to the level of the ASICS DS Trainer.

For grip, Magic Speed is “Great” with DS Trainer at “Excellent,” and Adizero Pro somewhere in between.

Fit: A half size up in MAGIC SPEED™ fits at the ball of my foot (my widest point) the same as Adizero Pro does in my regular size, but it does loosen after a break-in.

The outsoles line up; I see a bit of excess material wrinkling the forefoot of the ASICS, but it does not seem to affect function.

Lining up the outsoles of the two shoes, the smaller-sized Adizero is actually a few millimeters wider in the forefoot yet is more narrow in the heel.

(This supports my reason for going up in size in the ASICS with its resultant room in the heel; the ASICS is medium-width throughout while my foot narrows in the heel.)

Midsole: The Adizero Pro contains a full-length carbon plate while MAGIC SPEED™ has a forefoot plate. Both shoes offer a bouncy cushion, but Adizero’s is more subtle while providing more of a connected ground-feel.

The MAGIC SPEED™ has about a half-centimeter thicker midsole in the forefoot.

For non-elites, the ASICS MAGIC SPEED™ competes with the other road-running plated shoes on the market and brings this quality of ride at the lowest price.

This is the first shoe with a carbon plate only in the front half of the shoe.

That’s a mouthful! Many of these shoes are in their second rendition in 2021.

Opening the box for the MAGIC SPEED™ with great anticipation I asked my 9-year-old son who was standing near me if the 10 going to work.

“I so want to wear this ‘Sunrise Red/White’ shoe (that’s actually bright orange) on my sunrise run tomorrow morning!”

I put the shoe on.

After 30-40 miles the fit at the ball of my foot relaxed a touch. There is a bit of room, for me, around the base of the heel that is accentuated when the shoe is wet.

The shoe on the other foot during my first walk around the kitchen in MAGIC SPEED™ was 2019’s New Balance Vongo V4. The shoes are both low drop, 5 and 4 mm. respectively.

I enjoy the Fresh Foam cushion in the Vongo immensely. The Magic Speed felt similarly cushioned, but the quicker roll onto my forefoot was immediately noticeable. What a fun shoe!

This shoe’s sole unit is packed with tech!

The FLYTEFOAM® Blast midsole is softer and bouncier than FLYTEFOAM®. I like it better than its predecessor which never impressed me.

FFBLAST reminds me a lot of Nike’s React foam.

It feels a bit like running on compressed marshmallows, with the bounce-back of a trampoline. The ride of this shoe is buttery smooth as it rolls quickly off the toes.

The carbon plate in the front of the shoe functions as a stable platform for the foam to rebound back against. This is how Saucony describes their PWRRUN PB foam functioning in their Endorphin models.

The plate also distributes the impact force applied to the foam (and your foot) which increases its lifespan by not wearing with an indent at the ball.

The technology alternates hard and soft compounds to enhance rebound, and is more cost-effective to produce than polyurethane.

OBC was first used in running shoes in On’s Cloudswift in 2019 and then gained high acclaim for its marshmallowy bounce in ASICS NOVABLAST™.

MAGIC SPEED™ takes it and maintains the softness in the heel while adding some stability in the forefoot with the carbon plate. This makes for a neutral to light stability shoe.

A thin yet grippy layer of ASICS High Abrasion Rubber (AHAR®) covers the high wear areas of the outsole in a perforated overlay.

This makes for a more durable outsole than some higher-end plated shoes and also offers decent traction while keeping weight low.

The heel is 34 mm. and forefoot 29 mm. which is decently cushioned for training and even longer races.

Some prefer the thicker midsoles in Nike’s Next% shoes or adidas Adios Pro for the marathon distance, but I would be happy with MAGIC SPEED™’s cushion over this distance.

I prefer Adizero Pro’s ground feel for a 5k, but MAGIC SPEED™ is quick and bouncy enough for this race, too.

The width is medium-narrow. The length is typical for ASICS: on the shorter edge of true-to-size.

I found that the fit relaxed a touch after 30-40 miles. Now at 70 miles in the shoe, there is just enough movement for me to recommend the following:

If you are like me with a more narrow heel than ball of the foot and vary between two sizes, I recommend trying the smaller size first and loosening laces in the forefoot until you break the shoe in, though it will feel very tight.

This will keep your heel snug to make use of the heel counter.

I typically wear the smaller size (9.5) in ASICS, because I like a snug fit, though it’s borderline too small.

At first I really debated sending my size 10 back to exchange for the smaller size, but the initial fit at the ball held me back.

Now many miles in, I wish I could utilize the heel counter on long runs, as there is just too much movement.

I can’t tighten the laces as much as I would like to because the very thin tongue—my least favorite aspect of this shoe—does not protect from laces pressure.

(The Adizero Pro at least has strategic pads in its thin tongue to protect the foot.)

The sunrise color matches the METASPEED™ models and catches the light, though it does not have noticeable reflective patches. It is bright and attractive when running at sunrise and sunset!

MAGIC SPEED™ is a stellar attempt from ASICS to make a plated shoe for training and competing.

It has a soft, bouncy feel upon foot plant and rolls quickly off the carbon plate under the toes for a buttery-smooth ride and fast feel.

Wear it for speed work to long runs and on into 5k-marathon races, but it’s not as comfortable when wanting to run slow and easy.

The trickiest part of this shoe is finding the right fit since the thin tongue allows hot spots from the laces when pulling in any loose areas in the upper.

That said, it’s a snug-fitting medium-to-narrow width shoe, on the small side of true-to-size (which has been my experience in ASICS).

Try your regular size (for an ASICS) first and be prepared for a snug shoe. Pay attention to fit at the base of the heel, and know that the upper will relax slightly as you break the shoe in.

You may want to go half size up depending on your preferred fit.

I love running in this shoe as it makes the same paces feel easier. The bounce is pleasant and makes the run fun!

We purchased a pair of Asics Magic Speed from runningwarehouse using our own money. This did not influence the outcome of this review, written after running more than 50 miles in them.

Visit ShopAmazon.com
This page contains affiliate links. As an Amazon Associate I earn from qualifying purchases.
WHERE TO BUY
LOWEST PRICE
$83