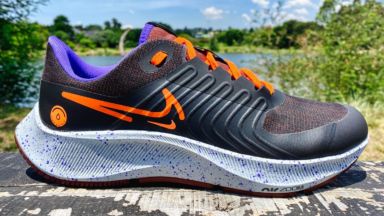 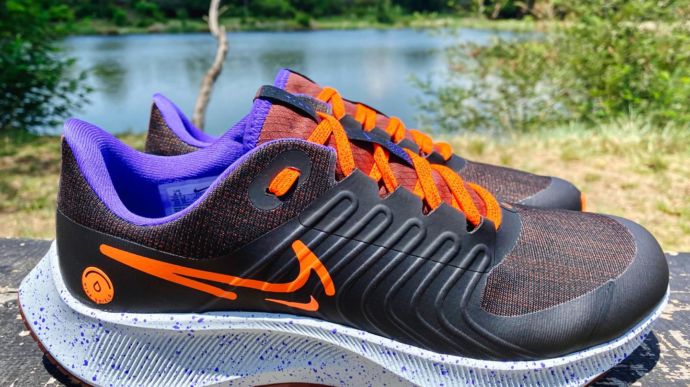 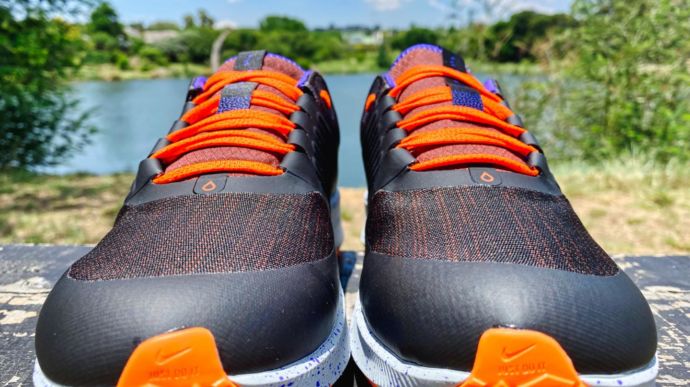 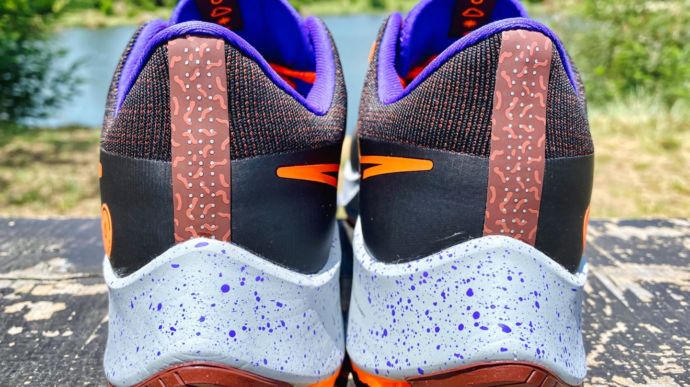 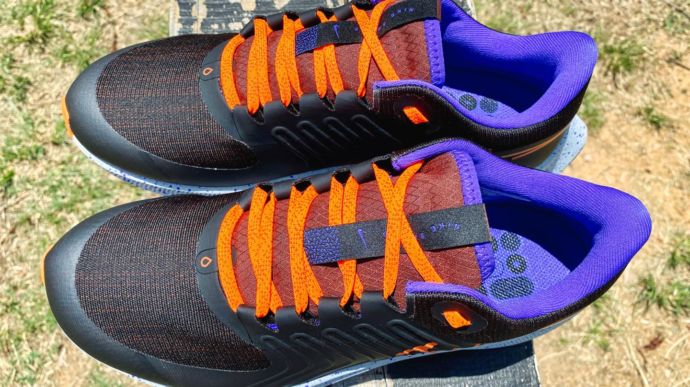 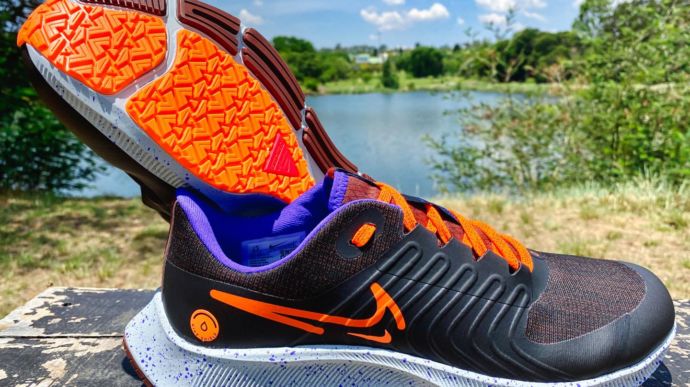 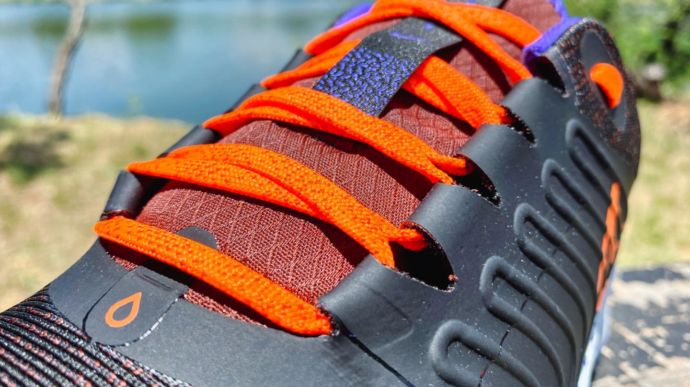 The Nike Air Zoom Pegasus 38 Shield is a daily trainer which is perfect for keeping your feet dry and warm in damp conditions. The Shield version has a thicker, water repellent upper and a modified outsole which makes it ride slightly firmer than the regular Pegasus 38.
WHERE TO BUY
LOWEST PRICE
$130.00
SHOE INFO
Nike
Brand
Air Zoom Pegasus 38 Shield
Model
Cushioning
Type
10.60 oz. (301 gr.)
Weight
130.00 US$
MSRP
33 mm
Heel
23 mm
Toe
10 mm
Heel Drop
Nike Pegasus
Family
WHO IS IT FOR
If you're a fan of the Pegasus franchise but you're looking for a more rugged daily trainer to protect your feet from the elements, the Pegasus 38 Shield is the shoe for you.
Help me choose

There’s nothing more uncomfortable than running in rain-soaked socks and shoes that squish with every footstrike. For many runners, rainy conditions means skipping a run- slippery paths and puddles are not friends of runners.

That was how I also felt until I discovered the Shield version of the Pegasus 37 last year.

It was such a game changer because rain was no longer an excuse to miss a run. This led to more consistent training sessions and it actually made me look forward to rainy runs for the first time.

While the Pegasus 37 Shield was great at keeping water out, it suffered from the same issue that plagued the Pegasus 37: its midfoot Flywire cables and narrow fit caused uncomfortable rubbing on my arches.

However, that still didn’t stop me from running in it. The Pegasus 37 Shield was one of my most frequently used running shoes in the last 12 months.

The Pegasus 38 Shield is designed for road running and has 3 main differences compared to the regular Pegasus 38:

I was really excited about the Pegasus 38 Shield this year because the normal Pegasus 38 was an extremely comfortable daily trainer so I was hoping that the new Shield version also had an improved fit.

The first time I tried it on, I was relieved to find out that the problem with the Pegasus 37 Shield had been fixed. The midfoot felt much more comfortable because there were no longer Flywire cables to secure the midfoot.

The Storm Tread outsole also felt thicker and harder than the normal outsole. Someone in my running group said that it sounded like cardboard slapping the ground.

During that first run, the Pegasus 38 Shield felt a lot more comfortable than the Pegasus 37 Shield and I was excited to get more runs in it.

The React midsole of the Pegasus 38 Shield doesn’t compress much so midsole durability is high (which has always been a strength of the Pegasus franchise) but the downside is that there isn’t much energy return so the ride feels a bit flat.

You get the traditional Zoom Air unit in the forefoot of the Pegasus 38 Shield which is a staple in the Pegasus series. It makes the forefoot feel firmer than the rearfoot but it does provide a more springy toe-off.

For me, the Pegasus 38 Shield is only suitable for relaxed easy or recovery runs. The times that I did try to pick up the pace, I found my legs working much harder to try to increase turnover due to the lack of any bounce or energy return.

The ride of the Pegasus 38 Shield feels very stable and supportive thanks to its wide base and its medium midsole stack height so it’s suitable for neutral runners as well as mild overpronators.

Storm Tread wet traction rubber is one of the main features of this Shield version of the Pegasus 38. The medial side of the outsole has chevron shapes and triangles instead of a waffle grid pattern so traction is improved, especially on wet surfaces.

I’m disappointed with the build quality of the Pegasus 38 Shield. Its outsole rubber is tough as nails and highly abrasion resistant but the upper has already started to separate from the midsole in some areas because of the constant exposure to water.

One of the main reasons why the Pegasus is so popular is because it lasts so many kilometers but unfortunately the Pegasus 38 Shield isn’t as durable as the regular version.

The mesh of the Pegasus 38 Shield is treated to repel water so it’s thicker than the mesh on the regular Pegasus 38. The hydrophobic upper is so effective that you can completely submerge the shoe in a pool of water below its collar and it won’t let any water through.

When I run in heavy rainfall, the water gets in through the opening of the shoe from deep puddle splashes and water running down my legs. It takes a long time for the water to drain from the inside of the shoe because of how thick the mesh is.

The upper is most effective in light rainfall or after the rain when the weatherized upper effectively manages to prevent the water from shallow puddle splashes going through the mesh.

There are extra overlays around the sides of the toe box and on the midfoot so the upper feels much warmer and is perfect for winters and cooler climates.

The shoelaces of the Peg 38 Shield are also weatherized which makes them thicker and stiffer than the regular laces. They don’t absorb water as easily as the regular laces do but they do become untied easily, even when I tie double knots.

The tongue is modified: it’s thinner and shorter than on the normal Pegasus 38 but is still attached to an inner sleeve so there’s no tongue slide.

The Peg 38 Shield fits true to size but following in the trend of recent Pegasus versions, it has a fit that is on the narrow side.

The Pegasus 38 Shield is a permanent staple in my shoe rotation. It’s definitely not my first choice for dry runs but when conditions are wet, it’s the first shoe I reach for.

I find it incredibly useful. It repels shallow puddle splashes and light rain so it keeps my socks and feet dry. I no longer have an excuse to skip a run because of bad weather.

Compared to the regular Pegasus 38, the Shield version handles wet conditions much better. It’s warmer and it has a better grip but it also has a lower level of durability due to the harsh weather conditions it’s used in.

If you’re looking for a daily trainer and you don’t care about weatherized features, the normal Pegasus 38 is a better option because it has a more comfortable upper, is cheaper, and is lighter. It has thinner outsole rubber so it also rides slightly softer.

As editorial policy, we do not accept free samples from companies.
We purchased this pair of Nike Air Zoom Pegasus 38 Shield at Running Warehouse with our own money.