Founded in Pennsylvania in 1898 and relocated to Cambridge, MA in the 1960s, Saucony is one of the oldest running shoes brands.

Over the past couple of years, Saucony revamped most of their shoe designs thanks to two main innovations: the ISOFIT upper construction and from this year the EVERUN sole material.

Saucony classifies their shoes in a very traditional way based on Pronation support, Road vs Trail and Racing/Track shoes.

Within each of these categories live different shoes for different runners. We are going to break the line down to make it easy to understand, and don't forget to keep reading for an overview of Saucony’s main technologies.

Some of Saucony's neutral running shoes have become incredibly successful staples in the running word. The Kinvara took the world by surprise when it launched almost 10 years ago and since then Saucony hasn't stopped innovating and refining their neutral line of running shoes.

Here are the main models and an explanation of key features and differences.

Check it on Amazon
The Ride ISO 2 is a dependably cushioned shoe that’s not too much, but not too little. The just right amount of soft responsive cushioning and accommodating upper make it a solid single shoe choice for the neutral runner. Read full review »

Check it on Amazon
The Saucony Triumph 17 is a trustworthy and reliable daily trainer that can handle loads of miles and still deliver a plush, smooth ride from start to finish.

The most noticeable improvements from to the Triumph is replacement of the EverRun midsole foam with the PWRFLEX+ foam and the introduction of the Form Fit insole that is popular in Saucony’s other lines. Read full review »

Check it on Amazon
A decade after its ground-breaking debut as a lightweight, low-drop daily trainer/racer in a market fraught with heavy, bulky shoes, the Saucony Kinvara is still leading the industry as a reliable long-distance road shoe.

Updates include removal of the Pro-Lock system, a reduction in blown rubber on the outsole, the addition of Achilles cushions, and a new Formfit footbed insole. Read full review »

Check it on Amazon
The Saucony Freedom ISO 2 improves on the very popular and highly regarded first version. By adding more EVERUN and focusing the shoe more towards a comfortable ride the Freedom ISO 2 exceeds its lofty expectations. Read full review »

Check it on Amazon
The Saucony Breakthru 4 is a lightweight daily trainer that can double as a racing shoe. What sets the Breakthru apart from other similar shoes is the durability at a low price. Read full review »

Check it on Amazon
Echelon is the cushioning/neutral cousin of the Redeemer. It has a layer of EVERUN to ensure a soft, cushioned ride without the motion control elements present in the Redeemer. It has a wide, stable base, a flat foot arc, it was made to accommodate (eventual) custom orthotics that you might need.

Saucony approached their lineup in a very logical way, giving almost each shoe in their neutral line a counterpart in the stability line. Here are the main models for runners in need of support.

Check it on Amazon
The redesigned and rebuilt Saucony Guide 13 is an exceptional everyday moderate stability trainer. The additions of PWRRUN cushioning and a new upper turned a great stability trainer into one of the best. Read full review »

Check it on Amazon
The Saucony Omni Iso 2 is phenomenal with moderate stability for a daily trainer. The combination of small but effective changes along with dependable technologies Saucony is known for makes the Omni Iso 2 a reliable everyday trainer. Read full review »

Check it on Amazon
The Saucony Hurricane Iso 5 is a highly cushioned stability trainer built for countless miles. The stability and plush yet responsive cushioning provided by the Hurricane Iso 5 make it well worth the substantial price tag. Read full review »

Check it on Amazon
The Saucony LIberty ISO 2 packs a punch with a dash of support. While pricey, it is built for the long run with a sturdy construction. Read full review »

Check it on Amazon
The Saucony Redeemer ISO 2 is so close to be a great stability/motion control running shoe for runners with flat feet (or particularly unstable gait) but a very heavy and warm upper and an issue with heel slippage ruined the fun for me. Read full review »

Saucony has one of the most popular trail running shoes - the Peregrine - but the other ones in the line are not to be ignored. Here they are:

Check Latest Price
The new Saucony Peregrine ISO is the continuation of a trail shoe that performs well for most trail runners. It has been updated to provide more cushioning but retains the same reliable comfort and performance. Read full review »

Check it on Amazon
The Saucony Xodus ISO 3 seems to be good for wet or dry trail, and isn't uncomfortable when I'm running on road or gravel between trail sections. It may feel a little clunkier at first, but I got used to it and the weight difference really didn't bother me. I wouldn't wear it for long periods on harder trail or road, but it was perfect for soft trail. Read full review »

Check it on Amazon
The Saucony Koa TR bills itself as a hybrid solution for those seeking a running shoe that will handle both trails and paved surfaces. While the shoe is comfortable and supportive, it falls short of expectations for both road use and trail running. Read full review »

Check Latest Price
The Saucony Koa St is a trail shoe that features 8mm lugs and can handle a variety of terrains. These shoes can be used on dry trails, but excel on muddy, loose, and even steep terrain. The oblique toebox allows for a natural toe splay, although women did find the toe box allowed for more room than the men’s version.The midsole of the Koa St features a 3mm EVERUN topsole for comfort and responsiveness. It distributes shock evenly while conforming to the shape of your feet.A synthetic upper keeps moisture away, although this feature makes the shoe less flexible than the Koa TR. Furthermore, while the upper is great at keeping moisture away, it is not very breathable so you may find your feet getting hot in warm weather. Flex Film overlays on the upper help the shoe wrap firmly around your feet for a more secure feel. In addition, the reinforced heel aids in keeping your feet in place while protecting your Achilles.The outsole is where the shoe really shines. It features PWR TRAC outsole is tacky, durable, and keeps traction on all types of terrain. The outsole also has 8mm lugs that face in different directions to help with traction.

An explanation of Saucony’s technologies

ISOFIT is the relatively new upper construction that Saucony places on all their higher-end models.

It is such a drastic change according to Saucony that once a model gets the “ISO” treatment, the numbering starts from 1. For example after the Triumph 12, there is the Triumph ISO and after that one the ISO 2. 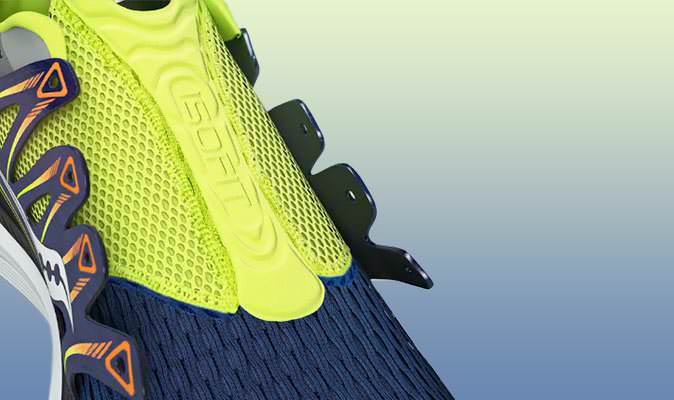 It’s an ultra-soft inner sleeve made of stretchable air mesh, that morphs to the foot for a sock-like feel with a floating support cage around it that cradles the foot.

There’s a little more to it. The inner mesh sleeve is actually made of 4 different kind of meshes, on the midfoot, midfoot sides, toebox, tongue…

The external support cage is where the 4 eyelets are and locks the foot securely to the shoes. The cage extends over the heel, leaving a window open.

ISOFIT is quite a substantial change to Saucony’s previous models and it commended a $20 to $30 price increase, depending on the model.

FlexFILM is what Saucony calls their new overlay tech. Instead of sewing plastic pieces to the upper to provide support and structure, the overlays are now melded to the upper in order to both save weight and reduce possiblities for irritation and blisters. 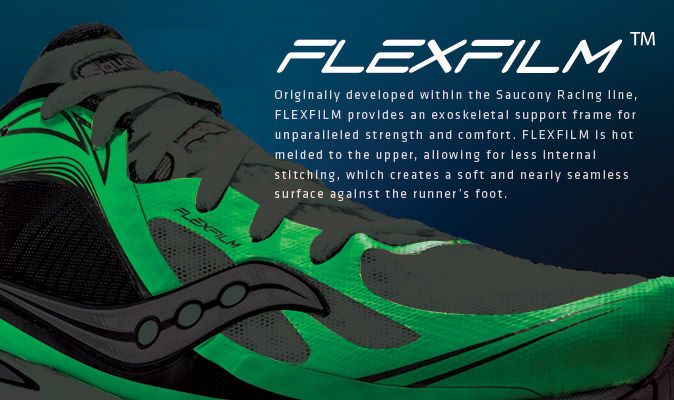 In a nutshell, the “grid” system is a perforated layer between the insole of the shoe and the midsole that acts as a net. Landing your foot over a net design helps spread the shock of the impact on a wider surface. 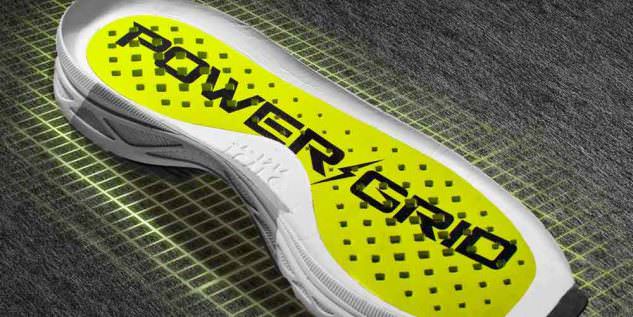 Powergrid evolved on the Progrid system by utilizing a lighter material.

Powergrid+ differs from Powergrid in the way that instead of being a separate layer on top of the midsole, now the midsole itself incorporates the holes that create the grid system.

EVERUN is the newest Saucony technology and it’s slowly but surely being incorporated in all new premium Saucony running shoes.

As you can see from the image above, EVERUN is an additional layer of cushioning material that lives close to the foot, providing a more immediate cushioning. According to Saucony it provides an 83% energy return and it does not break down with usage.