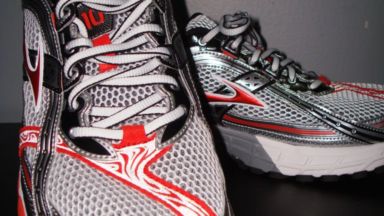 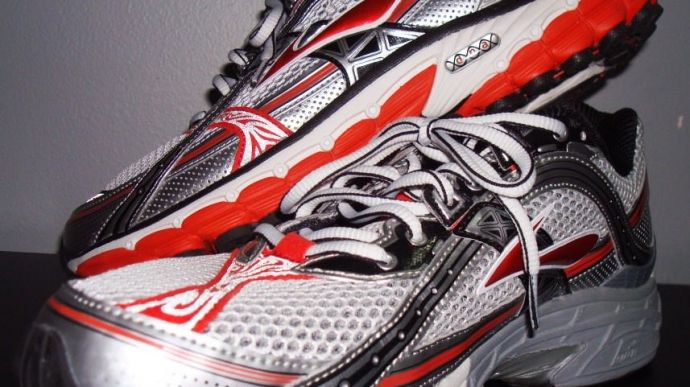 The Trance 10 is a contender for lower arched runners looking for a cushy long run shoe. Runners who like more arch in their shoes should try before they buy.
WHERE TO BUY
LOWEST PRICE
$140
SHOE INFO
Brooks
Brand
Trance 10
Model
Stability
Type
12 oz. (340 gr.)
Weight
140 US$
MSRP
WHO IS IT FOR
Moderate over pronators, runners with flat feet and heavier runners.
Help me choose

The Brooks Trance 10 certainly lives up to its name as soon as you open the box! It’s a visually striking shoe with a lot of design elements happening at once. The Trance 10 is criss-crossed with decorative overlays across the entire shoe. My test pair arrived in a vivid orange and aggressive silver and black colorway. Sporting a rather large medial post and a segmented lateral midsole, the Trance 10 also looks like a lot of shoe. Did it succeed in mesmerizing me on the road? Read on and we shall see…

The Trance definitely has the busiest upper I’ve ever seen in a shoe. Many of the overlays span the entire length of the shoe in effort to better center the foot over the midsole. The lower toebox overlay even circles the entire shoe where the upper meets the midsole.

As in the Adrenaline 11, Brooks has included three new technologies to improve the fit and function of the Trance 10.

Four flexible lacing tabs are now included along the eyelet row to help provide a more customized fit around the arch. A new external supplement to the heel counter, called a Heel Cradle, is in place on both medial and lateral portions of the heel. Its job is to provide better centering for an improved heel fit and stability. Brooks also employs a lacing anchor called Tongue Tied on the tongue to halt any sliding of the Trance’s tongue. A cushy BioMogo sock liner finishes out the upper.

Being a flagship shoe, The Trance 10 gets all the trimmings Brooks has to offer. The midsole of the Trance 10 is still built around the Brooks Progressive Diagonal Rollbar (PDRB) and its accompanying Diagonal Roll Bar Accel (DRB-Accel) shank. These are easily identified by a quick glance at the medial, or inside, portion of the shoe. The PDRB is the large section of gray foam and the DRB-Accel is the clear plastic bridge under the arch. These are placed in the Trance 10 to help correct an over pronating foot strike.

Over pronation is when a runner’s foot rolls too far inside during the gait cycle and often can be seen by watching how much a runner’s arch collapses when he or she is bearing weight on the foot. These two technologies work together with the “caterpillar” lateral midsole to reduce the amount of pronation a runner experiences. This “caterpillar” design forms the entire lateral midsole into smaller sections which lay down one at a time during running resulting in a smooth transition and greater lateral release.

The Trance 10 midsole is rendered in BioMogo which is Brooks’ environmentally friendly premium midsole foam. According to Brooks, BioMogo decomposes 50 times faster than convention shoe foams when it is placed in a landfill environment.

Providing the cush in the Trance 10 is Brooks brand new full length DNA cushioning system. DNA has now replaced Hydroflow and is a variable density material that responds according to the amount of force placed upon it. At slower paces, DNA is soft and becomes firmer as the runner accelerates.

The Trance 10 is in my favorite category: premium stability. I like a shoe that has all the technological bells and whistles with looks to match. Unfortunately, I wasn’t quite charmed by the Trance 10. The upper of the Trance has more room than its sister shoe, the Adrenaline, which is fine with me. I had no heel fit issues in the Trance as I did in the Adrenaline 11.

However, the Trance magic fizzled a bit in my number one category: arch support. As was the case in the Adrenaline 11, Brooks places the arch too low and too far forward in the Trance for my liking. I have very flexible arches and I demand a shoe to have adequate arch support placed close to my heel. The Trance simply isn’t built this way. In fact, my wife was running behind me and noted that my feet rolled inwards more in the Trance 10 than in my other shoes.

Having said that, the Trance 10 goes into cushioning overdrive and the DNA technology delivers the goods as advertised. The transition in the Trance 10 felt slower than other comparable shoes I’ve run in. I’ve never been a big believer that weight is a determining factor in shoe selection but I couldn’t help but get the feeling that the Trance 10 is best suited for someone with a larger frame. Bigger runners who like a low arched shoe could easily fall under the spell of the Brooks Trance 10.

We thank the nice people at Brooks for sending us a pair of Trance 10 for testing. This did not influence our review of the shoe, written after running more than 60 miles in them.