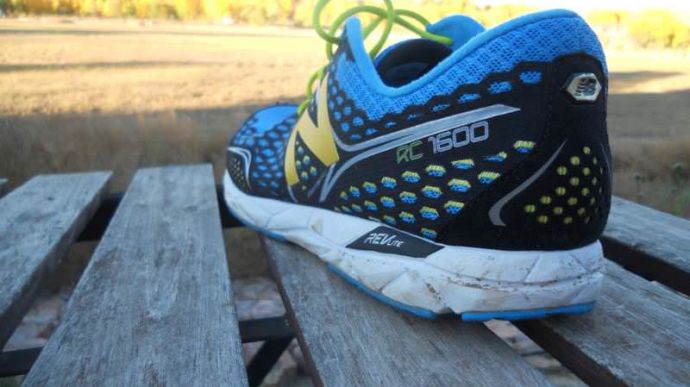 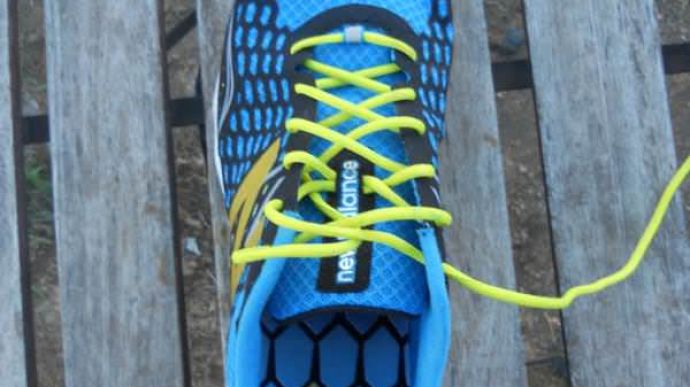 The New Balance MRC1600 is one simple fit change away from being the best marathon distance racing shoe I've ever worn.
WHERE TO BUY
LOWEST PRICE
$110
SHOE INFO
New Balance
Brand
RC1600
Model
Racing
Type
5.4 oz. (153 gr.)
Weight
110 US$
MSRP
WHO IS IT FOR
Road racing up to marathon distance and fast training workouts.
Help me choose

The New Balance RC1600 is their first racing shoe to incorporate RevLite foam which allows this shoe to be featherlite and durable enough to race your next marathon.

There is something very pleasurable about lacing up a new racing flat. Call it placebo effect but it can feel mentally and physically encouraging to have a light weight pair of racing slippers on your feet when you line up for your next speed workout or race.

Upon trying on the RC1600 I was immediately impressed by the form fit, lightweight, and relatively protective heel toe drop (6mm). I found myself wanting to save these shoes, running in them sparingly at first, afraid to wear them out quickly as many featherlight racing shoes are wont to do. But the more time I spent in the RC1600 I realized that the Revlite cushioning takes a beating from repeated workouts and races and continued to provide resilient cushioning and protection.

The more time I spend running in RevLite midsoles the more I think that this compound is the best midsole foam on the market for several reasons. It is incredibly light, seems to last past 500 miles, and the geometric design lends some support over longer races and tempo runs.

I found that the midsole of the RC1600 lasted three races, six workouts, and a total of over 120 miles without feeling any different than the day I put them on. Cetainly the midsole was more broken in and feels better on my foot, but my legs and feet recovered quickly after pounding the pavement at race pace in the RC1600.

The outsole consists of blown rubber which shoes little wear on my model and DynaRide which provided great traction on wet and even freezing surfaces. The DynaRide is featured predominantly on the front third of the shoe, perfectly placed for fast turnover.

The RC1600 upper is made of open mesh covered with welded overlays which New Balance calls FantomFit. Overlays are well placed and the interior of the upper is basically seamless, allowing runners who like to be sock less to get away with it.

Rather than using one of the current NB lasts they chose instead to go with more of a traditional racing flat style last, and this is where my one complaint of the shoe takes place. A moderate heel and forefoot width seem to taper into a narrow toe box, much like a track spike, which irritated my pinky toes. These toes in fact have not been irritated since college when I wore track spikes several times weekly.

The fortunate part about RC1600 upper is that it is flexible enough to accommodate wider feet, but after 10k of hard running I found that my pinky toes developed blood blisters.

It should be noted that as most running shoe companies have moved towards a wider forefoot fit, my toes, cramped from years in track spikes, have been able to breath making it difficult for me to slip on anything resembling a racing last. Since my only critique of this shoe was the fit, one shouldn’t dismiss this shoe as a miss in any way.

The RC1600 is one small tweak away from being the best racing flat I’ve ever worn. I will continue to race in this shoe, pinky toe blisters be damned, simply because the cushioning is so resilient and protective. Runners with narrow forefeet or those that prefer a very snug fit in the toe box will love the snug feel of the upper.

Regardless of your foot type, the RC1600 deserves a look as your next racing shoe.

We thank the nice people at New Balance for sending us a pair of RC1600 to test. This did not influence the outcome of the review, written after running more than 50 miles in them.

Built with the same concept of the previous versions of the Adizero Adios ...(Read expert review)

The Alphafly Next% is the flagship Nike marathon racing shoe and is deserving ...(Read expert review)